Copyright: © 2013 Attia A, et al. This is an open-access article distributed under the terms of the Creative Commons Attribution License, which permits unrestricted use, distribution, and reproduction in any medium, provided the original author and source are credited.

Matrix degradation is a key feature of COPD, leading to lung destruction, emphysema and impaired pulmonary function. Desmosine and isodesmosine are elastin-derived cross linked amino acids whose urine levels are considered representative of elastin breakdown. However, there is a lack of biomarkers to measure disease activity and disease progression in COPD.

Aim: This study was done to determine the utility of urine and blood desmosine as a biomarker in diagnosis of COPD patients and to evaluate their relationship with lung function parameters.

Conclusions: This study has demonstrated that both u-DES and b-DES levels were significantly elevated among COPD patients. Also, u-DES or b-DES levels are correlated with COPD severity and some lung function parameters.

Chronic Obstructive Pulmonary Disease (COPD) is a major public health problem. It is the fourth leading cause of chronic  morbidity and mortality in the United States, and is projected to rank fifth in 2020 in burden of disease caused worldwide, according to a study published by the World Health Organization [1]. COPD is characterized by a specific pattern of inflammation involving neutrophils, macrophages, and lymphocytes. These cells release inflammatory mediators and enzymes that interact with structural cells in the airways and lung parenchyma leading to destruction of lung parenchyma [2]. Matrix degradation is a key feature of COPD, leading to lung destruction, emphysema and impaired pulmonary function. The elasticity and resilience of the lungs are mainly provided by elastin, which is synthesized as a soluble precursor, tropoelastin [3]. Elastin synthesis involves secretion of tropoelastin, which is a 72-KD monomer, into the extracellular space by elastin-synthesizing cells, then cross-linking of monomers by two amino acids, Desmosine and Isodesmosine (DI) [4]. The cross-linking transforms the soluble tropoelastin precursor to the insoluble crosslinked mature elastic fiber. DI occurs only in mature elastin, and their presence in body fluids is a chemical indicator of degradation of mature elastic fibers [5]. They are released, either in free form or conjugated to peptides, as a result of elastin degradation, and can be found in sputum, blood and urine [6,7]. Classification of COPD is usually based on the severity of airflow obstruction, as assessed using forced expiratory volume in 1 s (FEV1) [1]. However, there is a lack of biomarkers to measure disease activity and disease progression in COPD [8]. Desmosine and isodesmosine have been proposed as biomarkers of lung matrix degradation in COPD [9-11].

It included 101 COPD patients (53 men and 48 women) with a mean age of 61.0 ± 4.60 years This group included 56 patients with stable COPD and 45 patients with COPD with exacerbation seen at the Pulmonology Department of King Fahad Hospital in Dammam, Kingdom of Saudi Arabia. The study was approved by the Ethics and Research Committee. All patients and control subjects gave their written informed consent before participating in the study. The diagnosis of COPD was established by clinical symptoms, physical examination, chest radiography and pulmonary function test according to the guidelines of GOLD 2013. The COPD subjects were classified into (stages I–IV) on the basis of their post-bronchodilator forced expiratory volume in one second (FEV1)/Forced Vital Capacity (FVC) and FEV1 % predicted. FEV1/FVC was<70% and their FEV1 fell into set bands (stage 1: FEV1 ≥ 80%; stage 2:50% ≥ FEV1<80%; stage 3:30% ≥ FEV1<50%; stage 4:FEV1<30%).

Stable chronic obstructive pulmonary disease: Stable COPD is defined by the absence of any exacerbation for 3 months preceding the study [12].

Chronic obstructive pulmonary disease exacerbation: The American Thoracic Society (ATS) and European Respiratory Society (ERS) defines an exacerbation as an acute change in a patient’s baseline dyspnea, cough, or sputum that is beyond normal variability, and that is sufficient to warrant a change in therapy [13].

It included 50 control subjects (33 men and 17 women) with a mean age of 59.6 ± 6.1 years. This group included 25 non smokers and 25 current smokers (over 10 pack years). They were without any disease and had normal spirometry. The patients and control subjects were matched for age, sex and Body Mass Index (BMI).

Measurement of urine and blood desmosine

Table 2: Urine and blood desmosine mean levels among the subjects included in this study.

Statistical analysis was performed with the Statistical Package for the Social Sciences, version 16 for Windows (SPSS Inc., Chicago, IL, USA). The difference between groups were tested by one-way analyses of variance (ANOVA) test. Correlations were investigated by means of the Pearson correlation coefficient. Values of p<0.05 were considered statistically significant.

Our study found that both u-desmosine and b-desmosine levels are statistically significantly correlated with age. These correlations were observed in all subjects included in this study (for urine and blood desmosine respectively: COPD patients; r=0.479 and 0.622 Control subjects; r=0.459 and 0.394) (P<0.01 for all groups).

In this study, the patients with stable COPD excreted a higher level of u-desmosine (13.19 ± 2.54) compared with healthy smokers (10 ± 2.91) and non-smokers (8 ± 2.101) (p<0.05). Similar results were found among COPD patients with exacerbation (18.51 ± 2.074) (p<0.01). U-desmosine levels didn’t show a statistically significant difference between healthy smokers and healthy non-smokers (p>0.05). Also, no statistically significant difference was found between non-smokers, current smokers and ex-smokers among the COPD patient groups (p>0.05).

Table 3: Desmosine mean levels in relation to severity of COPD.

In this study we found that the elevation of b-desmosine levels was found in 69% of all COPD patients (stable COPD and exacerbated COPD) based on a cutoff of 0.30 ng/ml. The area under the curve (AUC) for b-desmosine was 0.612 and 95% confidence interval (CI) was 0.451- 0.731 using the Youden index , the cutoff value for b- desmosine to predict COPD 0.30 ng/ml.This cutoff value had a diagnostic sensitivity of 71% and specificity of 53% (Figures 1-6). 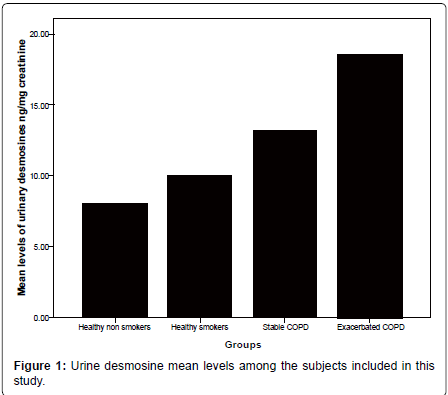 Figure 1: Urine desmosine mean levels among the subjects included in this study. 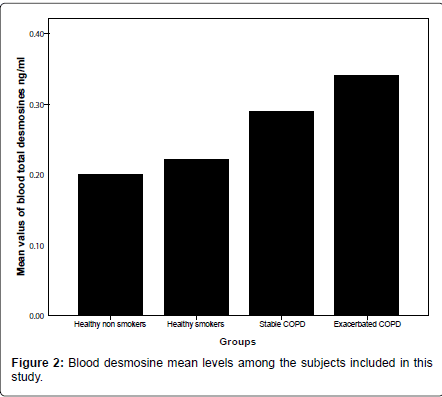 Figure 2: Blood desmosine mean levels among the subjects included in this study. 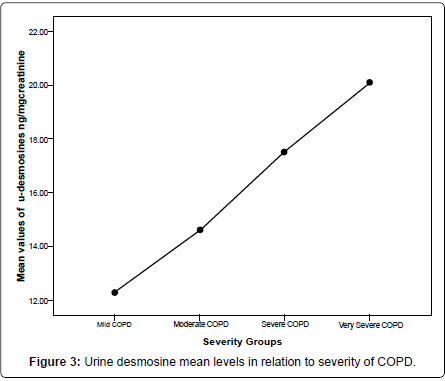 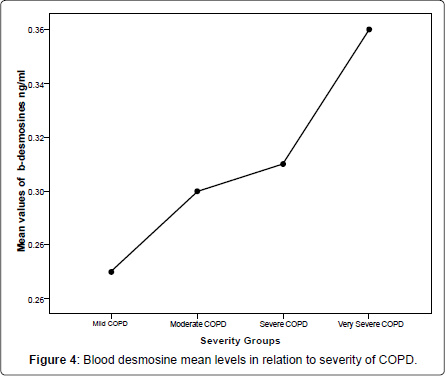 Figure 5: Scatterplot with regression slopes of log: a) Urine desmosine and b) Blood desmosine in relation to forced expiratory volume in 1s (FEV1)%. 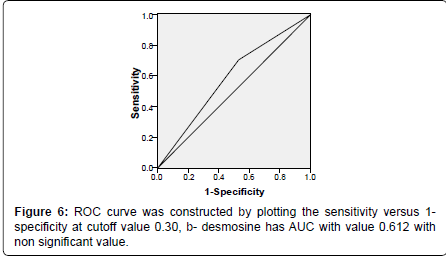 Figure 6: ROC curve was constructed by plotting the sensitivity versus 1- specificity at cutoff value 0.30, b- desmosine has AUC with value 0.612 with non significant value.

Our study found that both u-DES and b-DES levels are statistically significantly correlated with age. These correlations were observed in all subjects included in this study.These results are consistent with that of other investigators. Stone et al. [10] reported a positive correlation between age and u-desmosine excretion (creatinine normalized) in a small group. Also, Linderberg et al. [16] demonstrated a strong correlation between age and either u- or b-desomsine. These results are explained by with the finding that increased elastolysis and degradation of elastin are features of normal ageing [17] and the concept of “senile emphysema”, normal physiological ageing of the lung associated with dilatation of alveoli, enlargement of airspaces and loss of supporting tissue for peripheral airways [18].

In our work, the levels of u-desmosine and b-desomsine, (after adjustment for age, sex and BMI) didn’t show a statistically significant difference between healthy smokers and healthy non-smokers. Also, no statistically significant difference was found between nonsmokers, current smokers and ex-smokers among the COPD patient groups. Huang et al. [19] demonstrated no correlation between either u-desmosine or b-desmosine and smoking. However, reported smoking was significantly associated with levels of u-desmosine and non significantly with b-desmosine, after adjustment for age, sex and BMI [17]. Explanations for the different results may be due to variation of the sample sizes and varying correction for other, potentially confounding factors. There is another explanation for this difference in results; although, smoking is the main risk factor for COPD, not all smokers will develop COPD. The variation in the genetic and environmental factors among smokers will determine the harmful effect of the smoking on the lung.

We found that the u-desomsine and b-desomsine were statistically significantly higher among exacerbated COPD patients in comparison with stable COPD patients. These results suggest that these COPD patients with exacerbations may have increased elastin degradation and may excrete more elastin-derived cross-linked amino acids than patients with stable COPD. This probably reflects the increased burden of neutrophils within the lungs, occurring during an acute exacerbation of COPD [20,21] which is responsible for the purulence of the sputum and the high concentration of sputum serine proteases such as neutrophil elastase [22]. Thus, it may be supposed that the increased desomsine excretion in an exacerbation of COPD is the result of acute damage to elastin in bronchial and bronchiolar walls by neutrophil elastase, adding to the “baseline” elastin degradation found in stable COPD. The two COPD populations in the present study did not differ in terms of age or smoking history, although a significantly lower level of respiratory function was found in the group with the exacerbation. It is likely that this difference was due to the increased pulmonary inflammation during the acute exacerbation [17,23,24].

In this study we found that the elevation of b-desmosine levels were found in 69 % of all COPD patients based on a cutoff of 0.30 ng/ml. This cutoff value had a diagnostic sensitivity of 71% and specificity of 53% These findings suggest the elevations of desmosine are not specifically for COPD patients Our results are consistent with that of other researchers. Huang et al. [19] demonstrated that the elevations of b-desmosine level are specific to approximately 40% of COPD patients. Viglio et al. [25], and [18] they demonstrated that u-desmosine and b-desmosine were much more pronounced in COPD subjects than in those without COPD (Table 1). However, Boutin et al. [26] found significantly lower levels of u-desmosine in COPD patients. Explanations for the different results may be due to the different methods used, sample sizes variations and varying correction for other, potentially confounding, factors. Another explanation for inconsistent results between studies could be that the relationship between desmosine and lung function may be different in different populations depending on disease status and severity. However our results are in accord with the pathophysiology of COPD that involves neutrophil-driven inflammation, lung matrix degradation and increased desmosine release [27]. Although elastin is not specific component of the lungs but also serves an important function in the arteries, as a medium for pressure wave propagation to help blood flow, and is particularly abundant in large elastic blood vessels, such as the aorta. Elastin is also important in other tissues, such as elastic ligaments, the skin and the bladder. Therefore, it is possible that degradation from tissues other than the lung may have contributed to the associations seen in this study. However, since many of these tissues are affected in COPD due the systemic inflammation, this may also be relevant to the pathophysiology of the disease. It has also been estimated that the normal rate of lung elastin turnover accounts for only 19% of the desmosine excreted in urine [28].

Table 1: Demographic data for the subjects included in this study.