Copyright: © 2012 Nanakorn S, et al. This is an open-access article distributed under the terms of the Creative Commons Attribution License, which permits unrestricted use, distribution, and reproduction in any medium, provided the original author and source are credited.

Finger ridge density (RD) is the number of finger ridges that touch the diagonal line drawn between a square of 25 mm2 which is placed on the core of the fingerprint image. It has been useful as a sex determination aid in forensic practice as its values are significantly higher in females than males. The present study was aimed at investigating the RD of Thai adolescents aged between 10 and 12 years old. Subjects were 130 schoolboys and 130 schoolgirls were randomly selected and signed informed consent forms prior to printing each individual’s ten fingers by using the adhesive transparent tape technique. The Microsoft Word program was applied for precise counting of RD. The mean RD differences between left and right hands, boys and girls, radial and ulnar areas were statistically tested. The likelihood ratio was computed to obtain the probability inferences of sex, and posterior probabilities were estimated using Bayes’ theorem. Results revealed as follows: (1) The mean RDs (ridges per 25 mm2) of boys and girls were not significantly different across the radial (15.89 vs. 16.19, respectively) and ulnar areas (15.84 vs. 16.00, respectively). For each sex, mean RDs in the radial and the ulnar were not statistically different. (2) The mean RDs in both sexes were greater in the left hand fingers compared to the right hand, and were statistically significant only in girls. (3) For the ulnar area, the RD of 13 or less is most likely to be of from male origin and that of 17 or more has a low probability of being of female origin. Comparing the radial area, an RD of 14 or less has a low probability of being of male origin while a weak probability of the RD of 17 or more is most likely being of female origin.

Several empirical studies have been reported dermatoglyphics among various populations. Dermatoglyphics involve investigation of epidermal ridges and pattern types on human fingertips and palms which are useful in medical aids for diagnosis of genetic diseases [1,2]. It has been widely applied to bioanthropology and evolutionary biology to characterize populations and investigate the origin of human variability [3]. There are two types of dermatoglyphic studies, qualitative and quantitative. Qualitative dermatoglyphics is the investigation of fingerprint pattern types, where as finger ridge count on the fingerprint and a-b ridge count on the palmprint are the example of a quantitative dermatoglyphic study. Fingerprint pattern types and various specific characteristics, called minutia, have been utilized worldwide in forensic examinations for determination of individuality. High incidence of crime has made fingerprinting an important evidence for investigating officers. If the sex of suspects can be defined, their work scope could be narrowed down. To facilitate and shorten processes of investigations, finger ridge density (RD) becomes relevantly useful. The RD has been previously reported for forensic examinations aid in sex determination in multiple populations, for example Caucasian American, African American, Indian, Malaysian, Chinese, and Spanish ethnic groups. Higher RD in females than males in a given area was declared in earlier studies [4-7]. The RD, a number of finger ridges counted on the diagonal line drawn between a square of 25 mm2 on the core of fingerprint image, varies among populations and sexes especially in people over 12 years old [8]. Hitherto, a limit number of RD observations has been reported in Thailand, thus this study intends to investigate the RD as well as evaluate the influential factors like sex, ages, and ethnicity in a sample of northeastern Thai adolescents.

School children residing in the northeastern of Thailand were informed and gave signed consent coupled with permission of their father or mother prior to printing individual’s 10 fingertips. Two hundred and sixty subjects (130 boys and 130 girls aged between 10 and 12 years old) were randomly chosen from the school classes. Each individual’s ten fingers were printed by using an adhesive transparent tape technique [9]. Research ethical approval was reviewed by Khon Kaen University Ethics Committee for Human Research.

Two counting areas using the radial area [3] coupled with the ulnar area [7] on a fingerprint image above the core were selected. A modified technique for RD counting was performed using the Microsoft Word program to construct two squares of 5 × 5 mm with a diagonal line drawn from each square on a spreadsheet. Images of 10 fingerprints were scanned in a picture format file and pasted on the sheet with two squares constructed. To facilitate more precise RD counting, each fingerprint image with those two squares was enlarged 500%. The finger ridges that touch the diagonal line were counted. This value represents RD of each fingerprint (Figure 1).

Figure 1: Two squares of 5X5 mm placing above the core of fingerprint image (ulnar loop and whorl) for counting the finger ridges that touch on the diagonal line to obtain the radial and ulnar finger ridge densities.

The likelihood ratio (LR) was computed to obtain the probability inferences of sex, based on RD values [11]. Let FP be the fingerprint, C the male donor, and C’ the female donor:

The value of LR yields the strength of support for one of the hypotheses: C or C’. 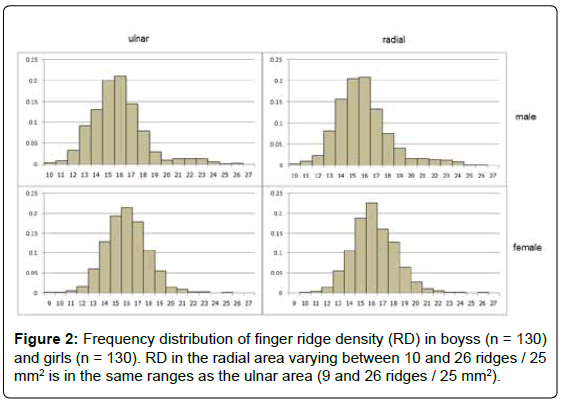 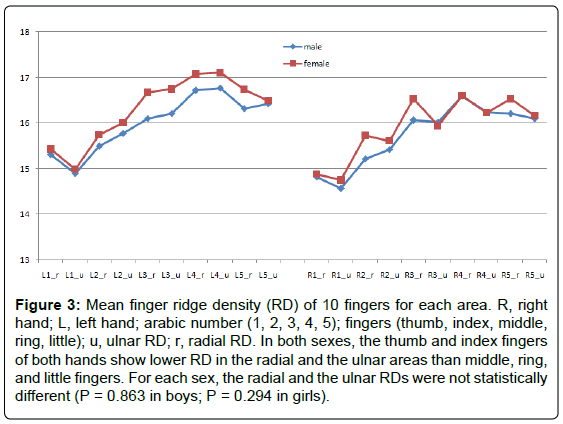 In the right and the left hands, the mean RD in the studied areas followed the same pattern as found for each finger (Figure 4). Mean RD in both sexes is greater in the areas of the left hand, thus showing finer ridges than in the right hand. However, the differences were only statistically significant in girls (P=0.25 in boys; P=0.026 in girls). 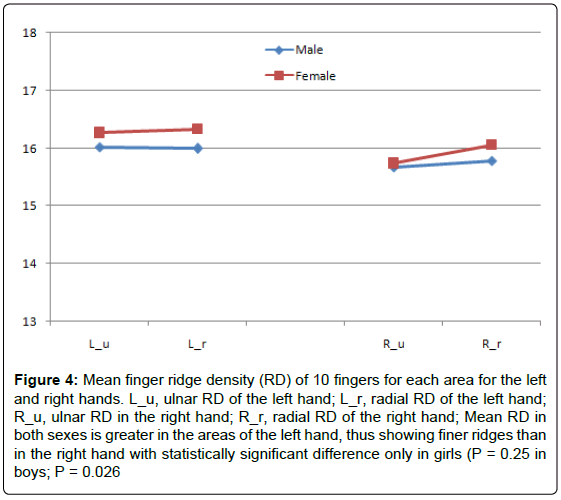 Table 1: Descriptive statistics of RD in both boys and girls when subdivided by areas.

Table 4 shows variability of means RD across various populations [4-7,13-14] including Thai adults [15] and Amerindian ethnic adolescents [16]. Females possess RDs statistically greater than those of males in any population except for Amerindian children [16]. Several reports have been suggested the RD differentiation among ages, sexes, and populations. Subjects in the present study and that of Amerindian children which are in the same age range showed significantly different mean RD. This might be caused by racial differentiation reflected the influence of environmental factors during pubertal growth promoting unequal epidermal ridges. Moreover, when comparing our result to Amerindian (Mataco-Mataguayo) adults, Chinese, Indian, and Malaysian populations, the differences of RDs were also found indicating the substantial influence of ethnic differentiation. Except for ages, sexes, and populations, dermatoglyphic region on finger [17] could be influenced a variability of epidermal ridge breadth [18]. The present study found that the thumb and index had a greater ridge breadth than that of other fingers, which is consistent with a study in Amerindian (Mataco-Mataguayo) adults. Moreover, mean RD of Thai children in this study and other Thai adults were compared to suggest age-related ridge variations. Mean RD of Thai boys seem to be greater than Thai adults (15.89 vs. 14.72 ridges per 25 mm2, respectively), but probably not for girls, implying a variability of epidermal ridge breadth during the growth period. This result confirms the factors of age and ethnicity but not sex in governing RD in northeastern Thai adolescents.

*present study standard deviation is in parenthesis. NA not available

The present study is the first report of RD among Thais adolescents aged between 10 to 12 years old residing in northeastern region of Thailand. The mean RD for all 10 fingers does not significantly differ between the ulnar and radial areas for both sexes. Finer ridges in the left hand than the right hand was observed in both sexes. The thumb and index had a greater ridge breadth than those of other fingers. The mean RD of female is greater than male but it is not statistically different. The identification of the most likely sex could not be succeeded since the relatively lower posterior probability. Means RD from various populations were compared to evaluate the existence of ages and racial differences in RD, confirming the observations of earlier researchers. Although the present study cannot predict sex determination by RD among Thai adolescent population, further studies on RD from subjects who older than 12 years old and from subjects belonged to different ethnicities in Thailand are proposed. The expectation from further results will be important tool for the forensic experts and law enforcement authorities.

The authors sincerely thank all subjects for their cooperation in fingerprinting. Professor Dr. Brian Sheehan and Dr. Ben Mudrak are appreciated for English approval of this manuscript. The study was funded by Khon Kaen University, Thailand.