The common carp (Cyprinus carpio) is a widespread freshwater fish of eutrophic waters in lakes and large rivers in Europe and Asia. The wild populations are considered vulnerable to extinction, but the species has also been domesticated and introduced into environments worldwide, and is often considered a very destructive invasive species,being included in the List of the world's 100 worst invasive species. It gives its name to the carp family: Cyprinidae.The common carp is native to Asia, and has been introduced to every part of the world with the exception of the Middle East and the poles. They are the third most frequently introduced species worldwide, and their history as a farmed fish dates back to Roman times. Carp are used as food in many areas, but are now also regarded as a pest in some regions due to their ability to out-compete native fish stocks. 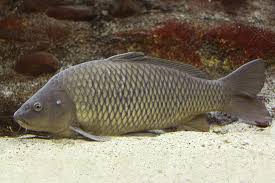