Dawkinsia arulius (arulius barb) is a tropical cyprinid fish native to the Kaveri River basin of south east India.Other common names include Tamiraparani barb, Silas barb and longfin barb.Adult fish are dark brownish olive on the back, becoming lighter on the sides to white on the ventral surface. It has a black, vertical blotch in the middle of its body, above the origin of its pelvic fin. It has a second black, vertical blotch above its anal fin, and a third black bar or blotch on the base of the caudal fin, though less well defined as the other two blotches. The fins are thin and transparent or translucent. Adults possess more pronounced colors than the juvenile. 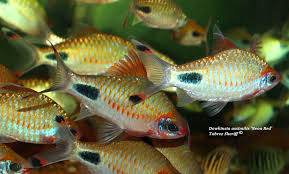