Calcium phosphate granules associated with hydrogels were developed as bone substitutes for various clinical applications. These Injectable Bone Substitutes (IBS) should regenerate bone tissue. The efficiency of these multiphasic materials was due to the osteogenic properties of the Microporous Biphasic Calcium phosphate (BCP) granules. The hydrosoluble polymers associated to BCP were considered as a carrier alone. In this study we used hydrosoluble polymers with and without gelling properties in association with the BCP granules. The two suspensions were implanted in femoral epiphysis defects in rabbits and dogs. No foreign body reaction was observed in all samples. However, due to the higher density of the hydrogel/BCP composite caused by the gelling; cell colonization and bone tissue ingrowth was delayed. This study demonstrated that the gelling properties delayed on time biological colonization and decreased the rate of resorption. 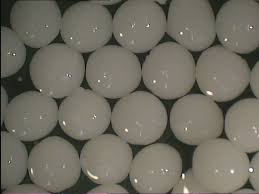