Unusual Bulky Presentation due to Missed Diagnosis of Hodgkin Lymphoma

Unusual Bulky Presentation due to Missed Diagnosis of Hodgkin Lymphoma

A 44-year-old woman was admitted to the emergency room presenting a voluminous neck and axillary tumor associated with an upper left limb swelling and progressively severe dyspnea. At triage, the patient stated that the swelling had presented itself about three years earlier and that during this time she had never sought medical care, had self-prescribed steroid medication and had managed to camouflage the bulky mass to her relatives. Clinical examination showed a massive swelling with evidence of mediastinal syndrome (venous distension of the neck, upper limb oedema, compensatory collateral circles and shortness of breath) 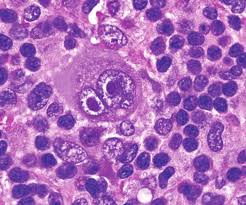