Midline Diastema is a Space between the Central Incisor. Although Physiologic ephemeral maxillary midline diastema is ascertained in children during eruption of maxillary anterior teeth, in most cases it is self-corrected subsequently by the eruption of maxillary canines as described by Broadbent. However midline diastema unrelated to the eruption of teeth has been observed owing to multiple etiologic factors. Treatment to align the central incisors depends on treating the predisposing factors. Read More 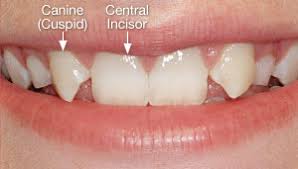