Copyright: © 2011 Reddy SD, et al. This is an open-access article distributed under the terms of the Creative Commons Attribution License, which permits unrestricted use, distribution, and reproduction in any medium, provided the original author and source are credited.

A highly senstive and rapid LC-MS/MS method has been developed and validated for the estimation of desvenlafaxine in rabbit plasma. The chromatographic separation was performed with 0.2% formic acid: methanol at flow rate of 0.4 mL/min on Symmetry Shield RP18 column with a total run time of 3.0 min. TheMS/MS ion transitions monitored were 263.90? 58.10 for desvenlafaxine and 281.30--> 86.10 for IS (metaprolol). Method validation and pre-clinical sample analysis were performed as per FDA guide lines and the results met the acceptance crieteria. The lower limit of quantification achieved was 0.5 ng/mL and the linearity was observed from 0.5 to 1500 ng/mL. This novel method has been applied to pharmacokinetic study of desvenlafaxine in rabbits.

Desvenlafaxine (DVS) is an novel serotonin (5-HT) and norepinephrine (NE) reuptake inhibitor (SNRI) that is currently in clinical development for the treatment of major depressive disorder and vasomotor symptoms associated with menopause. Desvenlafaxine (O-desmethyl venlafaxine, Figure 1) is the major active metabolite of the antidepressant venlafaxine, a medication used to treat major depressive, generalized anxiety and panic disorders [1]. Literature survey revealed that few LC-MS methods have been reported for estimation of DVS in biological matrices. Although the methods are sensitive and has an efficient extraction procedure but the total chromatographic run time is too long (10 min), whichmay not be favourable for routine subject analysis. Also, all these reported procedures have a very high oncolumn loading of the analytes at the ULOQ level, which may reduce the efficiency of the column and may affect the column life [2-4]. 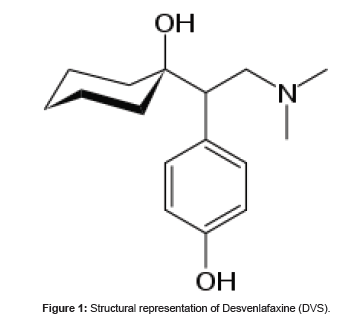 Methods capable of separating enantiomers of venlafaxine and O-desmethylvenlafaxine have been reported based on capillary electrophoresis [5-13] and HPLC-ESI/MS [14]. Thus, the aim of the present work was to establish a simple, accurate, rapid and sensitive LC-MS/MS method with a lower limit of quantification (LLOQ) of 0.5 ng/mL using a very low volume (50 µL) of rabbit plasma. Our method involves simple liquid-liquid extraction sample processing using terbutyl methyl ether (amicable for plasma) and has a run time of 3.0 min for the separation of both the analyte and IS; hence our method gives higher throughput. The newly developed LC-MS/MS method was successfully used in a rabbit pharmacokinetic study and to assess the plasma concentration of DVS following administration of a 50 mg/kg oral dose.

A Shimadzu VP (Shimadzu, Japan) LC system equipped with degasser (G1379A), quaternary pump (10ADvp), column oven (CTO- 10ASvp) and auto-sampler (SIL-HTC) along with a system controller (SCL-10Avp) was used to inject 2 µL aliquots of the processed samples on a Symmetry Shield RP18 column (50 x 4.6 mm, 3.5 µm, Waters Corporation, Ireland, UK), which was kept at ambient temperature (24 ± 2°C). The isocratic mobile phase, a mixture of 0.2% formic acid and methanol mixture (20:80, v/v) was filtered through a 0.45 µm membrane filter (Millipore) and then degassed ultrasonically for 5 min was delivered at a flow rate of 0.40 mL/min into the mass spectrometer electro spray ionization chamber.

Quantification was achieved by MS/MS detection in positive ion mode for analyte and IS using a MDS Sciex (Foster City, CA, USA) API 4000 mass spectrometer, equipped with a TurboionsprayT interface at 500°C. The common parameters, i.e. curtain gas, nebulizer gas, auxillary gas and collision gas, were set at 10, 35, 40 and 6 psi, respectively. The compounds parameters, i.e. declustering potential (DP), collision energy (CE), collision exit potential (CXP) and entrance potential (EP) for DVS and IS were 60, 43, 8, 10 V and 44, 26, 8, 10 V, respectively. Detection of the ions was performed in the multiple reaction monitoring (MRM) mode, monitoring the transition of the m/z 263.90 precursor ion to the m/z 58.10 product ion for DVS and m/z 281.30 precursor ion to the m/z 86.10 product ion for IS. Quadrupole Q1 was set on low resolution where as Q3 was set on unit resolution. The analytical data were processed by Analyst software (version 1.4.2).

Preparation of stock and standard solutions

A simple liquid-liquid extraction method was followed for extraction of DVS from rabbit plasma. To an aliquot of 50 µL plasma, IS solution (10 µL of 200 ng/mL) was added and mixed for 15 s on a cyclomixer (Remi Instruments, Mumbai, India). After the addition of 2 mL of ter-butyl methyl ether (TBME), the mixture was vortexed for 2 min, followed by centrifugation for 10 min at 3200 rpm on Multifuge 3SR (Heraus, Germany). The organic layer (1.8 mL) was separated and evaporated to dryness at 40°C using a gentle stream of nitrogen (Turbovap®, Zymark® Kopkinton, MA, USA). The residue was reconstituted in 200 µL of the mobile phase and 2 µL was injected onto LC-MS/MS system.

A full validation according to the FDA guidelines (US DHHS, FDA, CDER, 2001) was performed for the assay in rabbit plasma [16].

Specificity and selectivity: The specificity of the method was evaluated by analyzing rabbit plasma samples from at least six different lots to investigate the potential interferences at the LC peak region for analyte and IS.

Calibration curve: The eight point calibration curve (0.50, 1.00, 10, 50, 100, 500, 750 and 1500 ng/mL) was constructed by plotting the peak area ratio of DVS: IS against the nominal concentration of calibration standards in rabbit plasma. Following the evaluation of different weighing factors, the results were fitted to linear regression analysis with the use of 1/X2 (X = concentration) weighting factor. The calibration curve had to have a correlation coefficient (r) of 0.99 or better. The acceptance criteria for each back-calculated standard concentration were ± 15% deviation from the nominal value except at LLOQ, which was set at ± 20% (US DHHS, FDA, CDER, 2001).

Precision and accuracy: The intra-assay precision and accuracy were estimated by analyzing six replicates containing DVS at four different QC levels: 0.50, 1.50, 500 and 800ng/mL in plasma. The interassay precision was determined by analyzing the four levels QC samples on four different runs. The criteria for acceptability of the data included accuracy within ± 15% deviation (SD) from the nominal values and a precision of within ± 15% relative standard deviation (RSD) except for LLOQ, where it should not exceed ± 20% (US DHHS, FDA, CDER, 2001).

Stability experiments: The stability of DVS and IS in the injection solvent was determined periodically by injecting replicate preparations of processed plasma samples for up to 12 h (in the autosampler at 4°C) after the initial injection. The peak-areas of the analyte and IS obtained in the initial cycle were used as the reference to determine the stability at subsequent points. Stability of DVS in plasma during 6 h (bench-top) was determined at ambient temperature (24 ± 2°C) at two concentrations (1.50 and 800 ng/mL) in six replicates. Freezer stability of DVS in rabbit plasma was assessed by analyzing the LQC and HQC samples stored at -80 ± 10°C for at least 30 days. The stability of DVS in rat plasma following three freeze-thaw cycles was assessed using QC samples spiked with DVS. The samples were stored at -80 ± 10°C between freeze-thaw cycles. The samples were thawed by allowing them to stand (unassisted) at room temperature for approximately 2 h. The samples were then returned to the freezer. The samples were processed using the same procedure as described in the Sample Preparation section. Samples were considered stable if assay values were within the acceptable limits of accuracy (i.e. ±15% SD) and precision (i.e. ±15% RSD).

In vivo studies in rabbits

A pharmacokinetic (PK) study was performed in over night (~12 h) fasted healthy male albino rabbits (n = 3, weight range 2.3-2.5 kg) following approval from the ethical committee. During fasting time animals had free access to water. Blood samples were obtained following oral administration of 50 mg/kg DVS, (in the form of a suspension and extended release tablets with 50 mg equivalent weight of DVS, via silicone rubber gastric intubation tube to their respective groups) into polypropylene tubes containing EDTA solution as an anti-coagulant at pre-dose, 0.25, 0.5, 1, 2, 4, 6, 8 and 24 h. Plasma was harvested by centrifuging the blood using Biofuge (Hereaus, Germany) at 1760 g for 5 min and stored frozen at -80 ± 10°C until analysis. Plasma (50 µL) samples were spiked with IS and processed as described above. Along with PK samples, QC samples at low, medium and high concentration were assayed in duplicate and were distributed among calibrators and unknown samples in the analytical run; not more than 33% of the QC samples were greater than ± 15% of the nominal concentration. Plasma concentration-time data of DVS was analyzed by non-compartmental method using WinNonlin Version 5.1 (Pharsight Corporation, Mountain View, CA, USA).

The feasibility of various mixture(s) of solvents such as acetonitrile and methanol using different buffers such as ammonium acetate, ammonium formate and formic acid along with altered flow rates (in the range of 0.1-0.5 mL/min) was tested for complete chromatographic resolution of DVS and IS (data not shown). The resolution of peaks was achieved with 0.2% formic acid: methanol (20:80, v/v) with a flow rate of 0.40 mL/min, on a Symmetry Shield RP18 column (50 × 4.6 mm, 3.5 µm, Waters, UK) and was found to be suitable for the determination of electrospray response for DVS and IS.

Average matrix factor values (matrix factor = response of post spiked concentrations/response of neat concentrations) obtained were +0.60 (CV: 3.21%, n = 6) and +0.71 (CV: 12.70%, n = 6) for DVS in rabbit plasma at QC low (1.50 ng/mL) and QC high (800 ng/ mL) concentrations, respectively. No signifi cant peak area differences were observed. The matrix effect on IS was found to be +1.16 (CV: 14.95%, n = 6) at the tested concentration of 200 ng/ mL. Overall it was found that the plasma extract has a small impact on the ionization of analyte and IS. Figure 2 shows a typical chromatogram for the control rabbit plasma (free of analyte and IS), control rabbit plasma spiked with IS, rabbit plasma spiked with DVS at lower limit of quantification (LLOQ) and IS and rabbit plasma spiked with DVS at upper limit of quantification (ULOQ) and IS. No interfering peaks from endogenous compounds are observed at the retention times of analyte and IS in the matrix. The retention times of DVS and IS were 1.43 and 1.12 min, respectively. The total chromatographic run time was 3.0 min. Table 1: Intra- and inter-day precision of determination of DVS in rabbit plasma.

The predicted concentrations for DVS at 1.50 and 800 ng/mL samples deviated within ±15% of the nominal concentrations in a battery of stability tests: in-injector (12 h), bench-top (6 h), repeated three freeze-thaw cycles and freezer stability at -80 ± 10°C for at least for 30 days (Table 2). The results were found to be within the assay variability limits during the entire process. 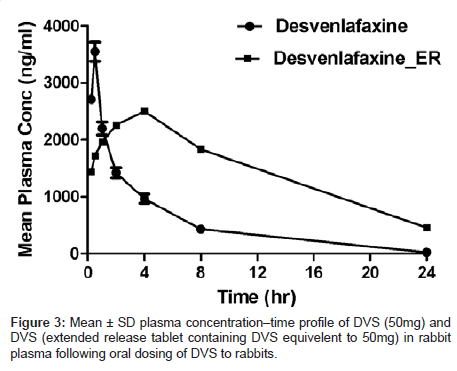 A method using LC-MS/MS for the determination of DVS in rabbit plasma employing simple liquid-liquid extraction was developed. The method is rapid, simple, specific and sensitive, and additionally demonstrates good accuracy and precision. Compared with the published methods, the present method features high selectivity and sensitivity with an LLOQ of 0.5 ng/ mL. We believe that this highthroughput method could provide a useful tool for the determination of DVS in plasma. The established method was successfully applied to a rabbit pharmacokinetic study and to assess the plasma concentration.

The authors are thankful to Dr. Vinay babu, (MD), Bioneed preclinical services Pvt Ltd. for providing facilities to carry out the work and for his valuable suggestions during the work.