Copyright: © 2011 Armato U, et al. This is an open-access article distributed under the terms of the Creative Commons Attribution License, which permits unrestricted use, distribution, and reproduction in any medium, provided the original author and source are credited.

The dentate gyrus (DGy) is made up mainly of granule neurons (GNs) with interspersed GABAergic interneurons. The subgranular zone (SGZ) of the DGy is one of the two main sites of neurogenesis (the subventricular zone [SVZ] is the other) in adult mice and humans being inhabited by progenitor granular cells and their transit amplifying (TA) progeny [1,2]. The GNs and hilar neurons produce neuro-trophins, such as brain-derived neuro-trophic factor (BDNF), nerve growth factor (NGF) and neuro-trophin-3 (NT-3), which selectively activate different Trk-family receptors [3]. The signals from these receptors attract receptor-bearing axons from basal forebrain cholinergic septal neurons (BFCSNs) to extend along the septo-hippocampal pathway and terminate on dendrites of neurons residing in the DGy molecular layer [4-6]. The BFCSNs axons terminate mainly in the inner molecular layer and the hilus, but not in the GNs layer [6]. The progenitor and TA neurons in the SGZ are in synaptic contact with the cholinergic axons of the BFCSNs and they express acetylcholine (Ach) receptors, which enable them to respond to the local diffuse availability of ACh [4]. The BFCSN axons release Ach, which promotes progenitor neuron proliferation as well as the survival and maturation of TA neurons in the SGZ. Conversely, inhibiting ACh activity or selectively killing BFCSNs with the monoclonal anti-NGF 192 IgG antibody-saporin immunotoxin inhibits the SGZ production of new neurons [4,7] (Figures 1 and 2).

The signals from Trk A receptors activated by mature NGF moieties in the DGy keep BFCSNs alive and their axons producing ACh. But with age and advancing Alzheimer's disease (AD), the proteolytic conversion of pro-NGF to mature NGF by plasmin declines as the result of an amyloid β 1-42 (Aβ 1-42)- induced fall of tPA (tissue plasminogen activator) availability [3]. This causes a build-up of pro-NGF, which in turn brings about the decline of the mature NGF TrkA receptor and the rise of pro-NGF's p75NTR receptor and of its association with the sortilin co-receptor instead of TrkA on the cholinergic BFCSN axons [3] (Figure 2). The signals from the pro-NGF-activated p75NTR receptors kill the BFCSNs and with them suppress the "biphasic" support for hippocampal memory encoding by which high Ach levels first favor memory encoding but hinder memory consolidation and retrieval, and low ACh levels improve both memory firming and retrieval [3,8] (Figure 1 and 2).

According to the current paradigm, p75NTR is only very sparsely expressed in the normal adult hippocampus and then only on BFCSN axons in aging and AD brains [9]. But something very important about hippocampal p75NTR role has been hitherto missed! According to a recent report [10] at least 90% of the DGy GNs in normal adult mice between 6 to 24 months-old have a 4.0-Âµm-long primary cilium protruding from them, in which they confine p75NTR along with somatostatin receptor 3 (SSTR3; Figure 3). Evidently this cilial p75NTR does not kill normal DGy GNs. And the cilia in which p75NTR is confined are known to be needed for adult neurogenesis [2,11]. 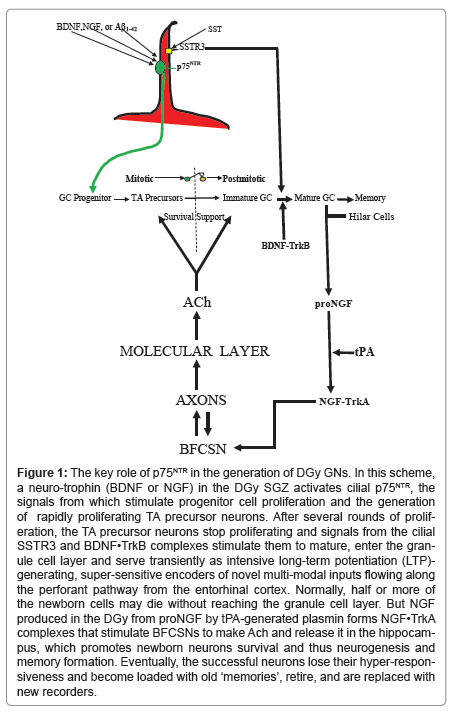 Figure 1: The key role of p75NTR in the generation of DGy GNs. In this cheme, a neuro-trophin (BDNF or NGF) in the DGy SGZ activates cilial p75NTR, the signals from which stimulate progenitor cell proliferation and the generation of rapidly proliferating TA precursor neurons. After several rounds of proliferation, the TA precursor neurons stop proliferating and signals 6 from the cilial SSTR3 and BDNF•TrkB complexes stimulate them to mature, enter the granule cell layer and serve transiently as intensive long-term potentiation (LTP)- generating, super-sensitive encoders of novel multi-modal inputs flowing along the perforant pathway from the entorhinal cortex. Normally, half or more of the newborn cells may die without reaching the granule cell layer. But NGF produced in the DGy from proNGF by tPA-generated plasmin forms NGF•Trk A complexes that stimulate BFCSNs to make Ach and release it in the hippocampus, which promotes newborn neurons survival and thus neurogenesis and memory formation. Eventually, the successful neurons lose their hyper-responsiveness and become loaded with old ‘memories’, retire, and are replaced with new recorders. 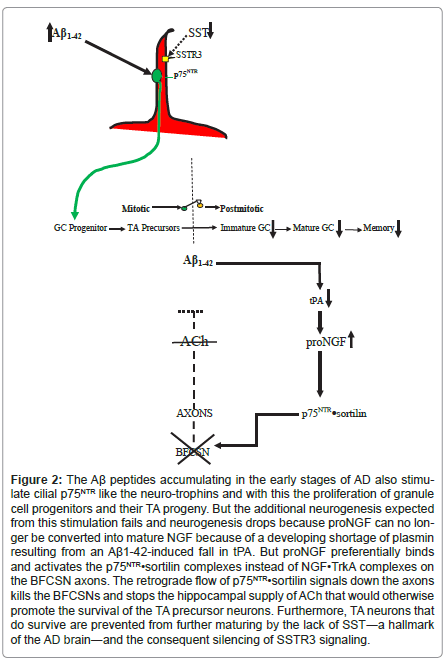 Figure 2: The Aβ peptides accumulating in the early stages of AD also stimulate cilial p75NTR like the neuro-trophins and with this the proliferation of granule cell progenitors and their TA progeny. But the additional neurogenesis expected from this stimulation fails and neurogenesis drops because proNGF can no longer be converted into mature NGF because of a developing shortage of plasmin resulting from an Aβ1-42-induced fall in tPA. But proNGF preferentially binds and activates the p75NTR•sortilin complexes instead of NGF•TrkA complexes on the BFCSN axons. The retrograde flow of p75NTR•sortilin signals down the axons kills the BFCSNs and stops the hippocampal supply of ACh that would otherwise promote the survival of the TA precursor neurons. Furthermore, TA neurons that do survive are prevented from further maturing by the lack of SST?a hallmark of the AD brain?and the consequent silencing of SSTR3 signaling. The ability of the proliferogenic cilial p75NTR to bind and be activated by Aβ 1-42 [14,16] (Figures 2 and 3) can explain a so far mysterious aspect of adult neurogenesis in early AD. Progenitor cell proliferation and adult neurogenesis normally decline with age, and it would be expected to at least continue dropping with the approach of AD [1,17-19]. But the ability of Aβ 1-42 to activate the proliferogenic p75NTR reverses this trend and progenitor cell proliferation counter-intuitively increases in the early Aβ 1-42-accumulating stages of AD [17-19]. While this is happening, the pro-NGF-activated axonal p75NTR.sortilin complexes induced by the accumulating Aβ 1-42 start killing BFCSNs and cutting off the hippocampal supply of ACh [3]. Also counter-intuitively despite the increased Aβ 1-42/p75NTR-driven progenitor cell proliferation, neurogenesis is not increased because fewer TA neurons can survive without the support of ACh and because the cilial SSTR3 receptors needed for maturation and memory functions [20] are silenced by the lack of SST in AD brains [21] (Figure 2)

In conclusion, cilial p75NTR must now be part of models of adult neurogenesis in the DGy and memory formation and of the cognitive decline in aging and AD brains.