Ambiguous leukemias are rare and account for 4% of all cases of acute leukemia and frequently demonstrate an aggressive disease course with mean survival rates less than those of leukemias derived from single cell lineage.

The numerical scoring system for defining mixed phenotype acute leukemia (MPAL) was formulated by European Group for the the immunological classification of leukemias (EGIL) [1,2]. This scoring system is aimed at distinguishing cases of MPAL from those with aberrant expression i.e. Ly+AML and My+ALL. MPAL or biphenotypic leukemia is defined when the score from two separate lineages is more than two. Antigens detected by flow cytometric immunophenotyping were assigned a score of 2, 1 or 0.5 depending on specificity of a particular antigen for myeloid, T lymphoid or B lymphoid lineage. Cases having a score of more than 2 in both lineages are designated as biphenotypic [3,4].

In the WHO 2008 classification of leukemias of ambiguous lineage, the requirement for assigning more than one lineage to a single blast population has been revised (Table 1).

Table 1: Requirements for assigning more than one lineage to a single blast population (WHO 2008).

A 4 year old female child presented to our hospital with a history of fever, right leg pain and generalized weakness of one month duration. General physical examination revealed pallor, generalized lymphadenopathy and hepatosplenomegaly. The child had no phenotypic features or any constitutional abnormalities of chromosome 21 (Down syndrome). Her hematological investigations revealed a hemoglobin of 8.2gm%, total leucocyte count -21,000/mm3 and a platelet count of 30,000/mm3. Colour Doppler imaging of right leg was normal. X-ray of the right leg including the knee and Hip Joint did not reveal any bony and soft tissue lesion. Her leg pains were the presenting feature in a peripheral hospital for which she was treated with Azithromycin for a suspected infectious aetiology and the pain resolved a few days after her admission in our hospital.

Peripheral blood film showed intermediate to late normoblasts and dual population of blasts amounting to 40% of total nucleated cells. No spherocytes and schistocytes were noted. One population of blasts resembled morphologically lymphoblast and few appeared like myeloblasts with cytoplasmic budding Large platelets were noted with few megakaryocytic fragments. Cytochemical tests-MPO and PAS stain were done on peripheral blood and showed the blasts were negative for both stains. Patient had no extramedullary leukemic deposits. Subsequently a posterior iliac crest Bone marrow aspiration and core biopsy were performed. Bone marrow aspirate was submitted for morphological, cytochemical and cytogenetic analysis. Bone marrow biopsy was submitted for histopathological examination.

Bone marrow aspirate was diluted however few cellular areas showed blasts which were medium to large sized with irregular nuclei with fine reticular chromatin and ,1-2 nucleoli with basophilic cytoplasm and cytoplasmic blebs. Another population of small blast with high N:C ratio and scant cytoplasm was also noted.Both the blasts on cytochemical stains were MPO, PAS and NSE negative.

Bone marrow biopsy was packed with blasts with a cellularity of 100%. Sections revealed sheets of megakaryoblasts along with a separate cluster of lymphoblasts that had displaced the marrow constituents (Figure 1). Reticulin stain showed grade II fibrosis. Immunohistochemical stains against antigen CD61,MPO,CD3,CD20 and CD34 were performed using standard peroxidase – antiperoxidase technique. Results showed strong positivity for CD61 in megakaryoblasts and sCD3 and CD34 positivity in surrounding blast clusters.Anti MPO was negative in both the blast population. 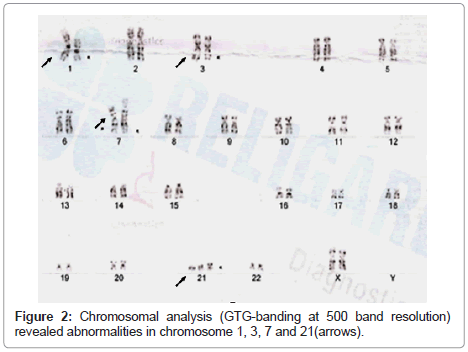 Patient was given two cycles of AML chemotherapy comprising of idarubicin, cytosine and etoposide after which the two marrow aspirates done at one month interval showed complete morphological remission. Remission induction was with AML-BFM93 protocol in the form of cytosine 50mg/m2 + Idarubicin 12mg/m2 + etoposide 80mg/ m2 and intensification with cytosine 3g/m2 and Mitoxantrone 10mg/ m2. Consolidation was with Thioguanine, Prednisolone, Vincristine, Doxorubicin, Cytosine, ITcytosine and Cyclophophamide as per standard doses for the child. Complete remission (CR) was defined by the presence of less than 5% blasts in the bone marrow, absence of extramedullary leukemia, and peripheral blood count recovery with a neutrophil count of at least 1 x 109/L and a platelet count of at least 100 x 109/L [5]. The first marrow done after induction chemotherapy showed <5% blasts and Gd I fibrosis. The second marrow showed complete disappearence of blasts with reversal of marrow fibrosis (Reticulin stain grade 0). Cytogenetic studies in remission marrow was not performed however.

Patient engrafted the bone marrow transplant, however on D+9 she developed skin graft versus host disease (GVHD) grade III in form of diffuse erythematous macular rashes over trunk and proximal extremities which progressed to generalized erythroderma with desquamation. She also developed Gut GVHD in form of loose stools. Colonoscopy showed multiple erythematous patches and erosions in rectosigmoid region. Colonic biopsy showed grade I GVHD with marked apoptosis of epithelial cells in form of apoptotic bodies and nuclear debris. Patient was managed on Mycophenolate mofetil, Tacrolimus, Methylprednisolone and Meropenem after which marked improvement was noted. The patient responded clinically and her blood counts became normal. Post HSCT no marrow study was done. The immunosuppressive drugs were tapered off gradually. Her peripheral blood samples which were sent for chimerism studies in our Transplant lab revealed complete chimerism on day D+152 as well as on day D +246 and finally on D+568 as per our BMT file records. The child has regained her appetite and has started going to a play school under constant supervision.

We report an unusual case of MPAL in which there was dual population of blasts. One expressing sCD3, an antigen reported to be highly sensitive for T lymphoid lineage and the other population of blasts expressing CD61 strongly which is antigen specific for megakaryoblasts. Both EGIL scoring system and WHO 2008 does not include megakaryoblastic/erythroblast IPT markers in its scoring system.

To date there has been no reports of B or T/Megakaryocytic or B or T/Erythroleukemias [6]. Our case fits into the subset of MPAL –NOS introduced in latest WHO 2008 classification of leukemias of ambiguous lineage.

Studies have demonstrated that structural chromosome abnormalities are frequent and that there is high incidence of Philadelphia chromosome (9; 22) seen in one third of the cases, rearrangements involving 11q23 and complex cytogenetic abnormality [7,8].

Patient was given AML induction therapy with cytosine, idarubicin and etoposide with which she achieved complete morphological remission. Our patient is at present symptom free after eighteen months of having undergone Allogenic Bone marrow HSCT. She is on monthly follow up in haematology OPD.

Firstly, it highlights the shortcomings of WHO 2008 system of classifying MPAL as they have not included AML M7/T cell leukemias. Secondly, leukemias of AML-M7/T cell lineage do occur on the contrary to many who believe they might not occur [3]. Thirdly, AML chemotherapy followed by allogeneic bone marrow transplant in such patients gives a good result and may be line of treatment for such patients.

Copyright: © 2012 Devika G, et al. This is an open-access article distributed under the terms of the Creative Commons Attribution License, which permits unrestricted use, distribution, and reproduction in any medium, provided the original author and source are credited.