An Analysis of the Expression of Bcl-2, Podoplanin and Lymph Angiogenesis in Benign and Malignant Salivary Gland Tumours

Background: Salivary gland tumours comprise a significant proportion of oral tumours and are the next common neoplasm of the mouth after squamous cell carcinoma. These neoplasm’s have widely variable histopathologic and biologic characteristics, which makes it difficult to determine the pathogenesis and selection of therapeutic modalities. Alteration in some proto-oncogenes and tumour suppressor genes may lead to the development and progression of these tumours.

Aim: The purpose of this study was to analyze the immune histochemical expression of Bcl-2 and epithelial podoplanin and lymph angiogenesis in benign and malignant salivary gland tumours.

Salivary gland tumours comprise a significant proportion of oral tumours and are the next common neoplasm of the mouth after squamous cell carcinoma. These neoplasm’s have widely variable histopathologic and biologic characteristics, which makes it difficult to determine the pathogenesis and selection of therapeutic modalities [1].

Apoptosis (programmed cell death) is a specific form of cell death that constitutes an important mechanism of maintaining homeostasis. Apoptosis occurs physiologically as well as in the course of many diseases. Alterations of apoptosis are always coupled with pathological conditions and/or oncogenesis [2]. Anti-apoptotic marker like Bcl-2 may potentially be able to predict the tumour behaviour.

Bcl-2 encoded by the proto-oncogene Bcl-2 and expressed in many types of malignant tumours, protect cells from apoptosis induced DNA damaging agents. This anti-apoptotic effect is assumed to be caused by retardation of cell proliferation due to cell’s accumulation in the G0 and G1 phases of the cell cycle [3].

Bcl-2 contributes to malignant cell expansion primarily by prolonging cell survival rather than by increasing the rate of cellular proliferation, and accumulation of cells with an aberrant Bcl-2 expression could be an important step in carcinogenesis [4,5]. Its over expression has been reported in most human low grade tumours and this inhibition of apoptosis has been regarded as being one of the most common pathways of tumourigenesis [6].

Invasion of cells into the surrounding tissue and destruction of normal tissue architecture are two hallmarks of malignant tumours. Morphologically, two patterns of tumour invasion can be distinguished: single cell and collective cell invasion. Podoplanin, a small mucin like protein, mediates a pathway leading to a collective cell migration in vivo and in vitro. Human podoplanin is a 38KDa type-I trans membrane glycoprotein consisting of 162 amino acids, nine of which form the intercellular domain. In normal human tissue, podoplanin is expressed in kidney podocytes, in skeletal muscle, placenta, lung and heart, in my fibroblasts of the breast and salivary glands, in osteoblasts and mesothelial cells [7]. D2-40 a commercially available antibody specifically recognizes human podoplanin and can be used to assess podoplanin expression in tumour cells [8]. Podoplanin expression using D2-40 has been reported to appear in many types of human cancers such as mesothelioma [9], skin cancer, carcinoma of the uterine cervix [10], ovarian cancer [11], thyroid cancer and head and neck squamous cell carcinoma [12].

Podoplanin is highly and superficially expressed in lymphatic endothelial cells, but not blood vessel endothelium. The immunostaining of D2-40 is now widely used for the detection of tumour lymph angiogenesis in many human cancers.

Thus, this study was attempted to investigate the immunohistochemical expression of Bcl-2 and podoplanin in the tumour cells of benign and malignant salivary gland tumours and to assess lymph angiogenesis in these lesions.

Serial sections of 4µm thickness were taken on silanised slides meant for immunohistochemistry. All slides were then subjected to microwave heat- induced epitope retrieval (cycle 1: 98°C for 5 minutes, cycle 2: 95°C for 8 minutes). Endogenous peroxidise activity was blocked by treating the sections for 10-15 minutes in 0.3% peroxide block solution. Power block was applied for 10-15 minutes and slides were then incubated with primary antibody, anti Bcl-2 (for Bcl-2) antibody and D2-40 antibody (for podoplanin) for 1 hour in a humidifying chamber and incubated with secondary monoclonal antibody for 30 minutes. DAB was applied to all slides till brown colour appeared and counterstained with haematoxylin.

All slides were assessed at a magnification of 40X of the light microscope (Eclipse 80i) in 5 representative areas called hot spots of the epithelium. Yellow to dark brown particles in the cytoplasm, indicated positive staining evaluation of positive reactions was performed using the criteria defined by Eslami B. et al. [12]. According to him, cumulative points were calculated as a product of Staining Intensity Scores (A) and Proportion of Positively Stained Cell Score (B).

The staining intensity (A) was rated on a scale of 0 to 3 as score 0 (colourless), score 1 (light yellow), score 2 (brown yellow), score 3 (brown). An average of 5 hotspots was then as the staining intensity (A) of the slide. Proportion of stained tumour cells (B) was scored as score 1 (when less than 25% positive cells), score 2 (25 - 75% positive cells) and score 3 (when more than 75% positive cells). The scores were based on examination of the whole section in each biopsy. Cumulative score was then calculated (A x B) and scored as score: 0 negative (-), score: 1-4 weakly positive (+) and score : >4 strongly positive (++).

For evaluating the lymphatic micro vessel density (LMVD) immunohistochemical D2-40 reactions were evaluated considering the cytoplasmic staining in lymphatic endothelial cells. Evaluation of positive reactions was performed by counting positive D2-40 lymphatic vessels, sitting around a visible lumen clearly separated from adjacent micro vessels and from other connective tissue components. Packed vessels were assumed as one lymphatic unit. The images were captured on to computer under 20X objectives, to evaluate the number of lymphatics. All the results were then statistically analyzed using ‘T test’, ‘Mann Whitney test’ and ‘Chi - square test’.

A total of 20 cases formed the study group out of which Group I (Benign) comprising of 8 cases and group II (Malignant) comprising of 12 cases were each immunohistochemically stained for Bcl-2. All 8 cases of group I was positive and showed weak positivity. In group II, all 12 cases were positive and the expression varied from weak to intense with 1 case showing strong positive Bcl-2 expression. Overall, malignant tumours showed a more intense Bcl-2 expression compared to benign tumours.

A total of 20 cases formed the study group out of which Group I (Benign) comprising of 8 cases and group II (Malignant) comprising of 12 cases were each immunohistochemically stained for podoplanin. All 8 cases of group I were positive and expression varied from weak to intense with 3 cases showing strong expression. In group II, all 12 cases were positive and the expression varied from weak to high with 7 cases showing strong positive podoplanin expression. Overall, malignant tumours showed a more intense podoplanin expression compared to benign tumours.

Lymphatic vessel density (LMVD) expressed by podoplanin in benign neoplasm was significant (5.1 ± 3.13). Lymph angiogenesis was also pronounced in MEC and present in both types. Peripheral MEC showed a mean LMVD count of (4.2 ± 2.37) whereas central MEC showed higher count of mean (5.05 ± 5.021) (Table 3). The number of podoplanin positive lymphatic vessels was not higher in adenocarcinoma NOS than other salivary gland tumours (Mean=2.60 ± 1.697). Both, Bcl-2 and podoplanin were weakly expressed in polymorphous low grade adenocarcinoma but it showed a significant LMVD count (Mean=3.40) (Table 3). Results were compared to haematoxylin, eosin stained sections of same tissues, and only those vessels, which were recognized as endothelial cell, lined vessels in H & E stained sections were counted as positive lymphatic vessels.

Tumour initiation, progression and invasion involve cellular proliferation, apoptosis as well as cell adhesion and communication that ensure cell survival, renewal and co-ordination. Salivary gland neoplasms show a varied behaviour [7]. Benign salivary gland neoplasm’s like pleomorphic adenomas may show an indolent behaviour or grow to very large sizes with/without any signs of malignant changes. Malignant salivary gland tumours may also show a varied behaviour ranging from borderline malignancies like PLGA to high grade MECs. Thus, in the present study, these neoplasms were assessed for the expression of Bcl-2, an anti-apoptotic marker; and podoplanin, a small mucin like protein, which has been shown to mediate cell migration and invasion in various malignancies. An increase in number of lymphatic vessels in the tumours trauma has also been shown to correlate with lymph node metastasis and is a predictor of clinically meaningful outcomes in a number of malignancies. Thus, the role of lymph angiogenesis in salivary gland neoplasm was also assessed. A recent report of Bcl-2 expression in MEC by Yin et al concluded that Bcl-2 is one of the potentially useful markers for survival in patients with MEC in minor salivary glands. The expression of Bcl-2 in cells in MEC may be linked to the degree of differentiation. Terminal differentiated cells like the mucous cells, normal acinar cells, salivary gland duct cells also do not express Bcl-2, but basal cells of the normal oral epithelium express Bcl-2 [16]. In our study, Bcl-2 immunohistochemical localization in malignant tumours mostly showed weak expression with only 1 out of 7 mucoepidermoid carcinomas showing strongly positive expression. Immunoreactivity was mainly found in the peripheral tumour cells and cells surrounding tubulo-ductal structures (Figure 2). The immunohistochemical expression of podoplanin in malignant tumours varied from weak to intense with mucopeidermoid carcinomas showing the most intense expression followed by adenocarcinoma NOS and polymorphous low grade adenocarcinoma.

It was found that 5 peripheral mucopeidermoid carcinomas showed high expression for podoplanin and 3 out of the 4 central mucoepidermoid carcinomas showed moderate expression suggesting a more intense expression of podoplanin in peripheral than central MECs. Positive podoplanin expression in MECs was restricted to the epidermoid cells while the mucous cells did not show any podoplanin expression. The intermediate cells showed a variable staining pattern (Figure 4). Podoplanin has been reported to enhance tumour invasion by enhancing cell motility. Cancer cell migration and invasion involves active remodelling of actin cytoskeleton, however, podoplanin does not interact directly with actin but via ERM proteins such as ezrin, radixin and moesin. It has been shown that over expression of podoplanin leads to increased phosphorylation of ezrin, which links to the observed rearrangement of actin cytoskeleton. Podoplanin also increases activity of Rho family GTPases, which have also been linked to tumour cell motility [19]. It was also found both the cases of Adenocarcinoma NOS showed positive podoplanin expression with 1 showing pronounced expression. 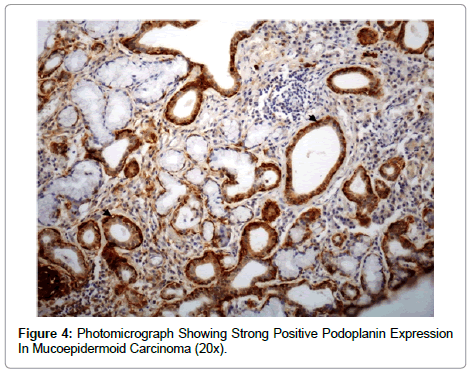 In addition, lymphatic vessel density (LMVD) expressed by podoplanin in pleomorphic adenomas was significant suggesting lymphangiogensis to be pronounced in this neoplasm. Lymph angiogenesis was also pronounced in MEC and present in both types (Figure 5). Mean of lymphatic micro vessel density count was found to be almost similar in both central and peripheral MEC. An increase in number of lymphatic vessels in the tumour trauma has also been shown to correlate with lymph node metastasis and is a predictor of clinically meaningful outcomes in a number of malignancies. Adenocarcinoma NOS showed LMVD counts similar to MECs. Though, Bcl-2 and D2- 40 were weakly expressed in polymorphous low grade adenocarcinoma but it showed a significant LMVD count. 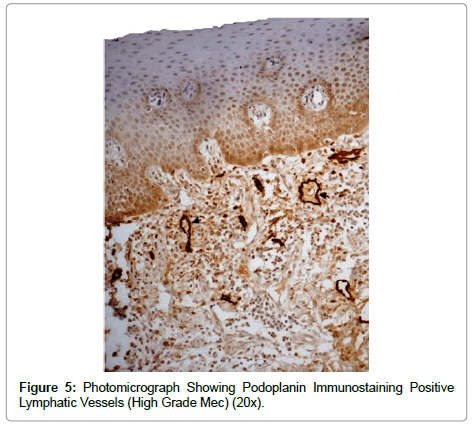 Copyright: © 2013 Kaur H, et al.. This is an open-access article distributed under the terms of the Creative Commons Attribution License, which permits unrestricted use, distribution, and reproduction in any medium, provided the original author and source are credited.