Copyright: © 2013 Virtanen P. This is an open-access article distributed under the terms of the Creative Commons Attribution License, which permits unrestricted use, distribution, and reproduction in any medium, provided the original author and source are credited.

The ideas to start investigate protoberberines curable influence to infected patients is based on the fact that certain African tribe uses Enantia chlorantha species. The multiple electron transfer of natural bis-benzyl-isoquinoline alkaloid (protoberberine) mixture was successfully to recover hepatitis B. Therefore we decided research in details recovering powder tested on laboratory animals; it was found that the processed electron transferred alkaloid mixture was regenerative in traumatized laboratory rodents liver. The alkaloid mixture had a positive influence both on the cirrhotic animals and also on the artificially virally infected liver and, in general, on lesions caused by toxins. The rehabilitation seems to be independent on the lesions caused by trauma, which only agreed with the suddenly appearing liver anastomoses formation, which produces an unobstructed blood flow and also simultaneously destroys the hindrance originating from dissipating fibrous or RNA overgrowth into hepacytes, made by lymphocytes and giant cells. In this article it has to be concluded that the key issue is the finding that hot water can transfer a tiny amount of energy as seen in the electropherogram. Such a dynamic molecular self-organisation in electron transfer remains a substantial challenge for pharmaceutical chemistry or chemistry in general.

The dried park from Enantia chlorantha, was milled and solved into methanol overnight, separated the solute by decantation and repeat the previous process. The sediment was refused. The solute was concentrated and water was used to precipitate the proteins and they have discarded. After these procedures we have got at an alkaloid mixture, which according our GC/MS analysis had a palmatine basic structure like shown in Scheme 1. 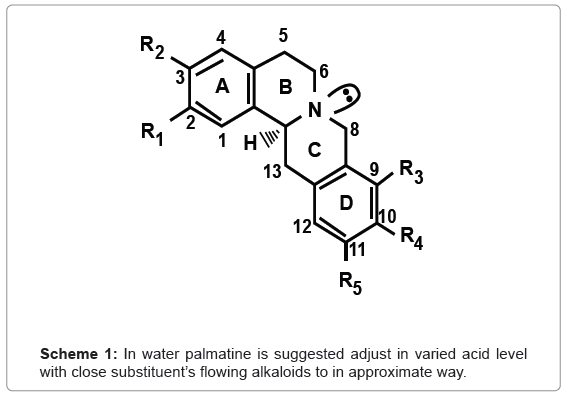 Scheme 1: In water palmatine is suggested adjust in varied acid level with close substituent’s flowing alkaloids to in approximate way.

Scheme 2: Structural variability as function in different acidity level according to Virtanen dissertation [3].

Passive self-organisation is very attractive for energy conversion catalysis, because small molecules like water are efficiently involved in electron transfer. Electron flow through the energy of catalytic material must be designed in such a way as to permit passive self-organisation as shown for semiconductor materials. The self-organized electron transfer is still unknown [5]. But it seems to be evident that the structure of reacting molecules together with macromolecular environment should be arranged in such a way that it can temporarily store huge energy input [6].

This momentum flow acts like a negative friction on the reaction core, thus transferring some part of the relaxation energy to the reacting subsystem. Thus the dynamic molecular self-organisation for electron transfer remains a substantial challenge for theoretical and synthetic chemistry [6].

The natural alkaloid can created to have such a self-assembly of reactants which can substantially allow the electron transfer. The hot water can greatly be involved in electron transfer conversion. Thus the reacting molecules permit temporarily the ability to store huge energy input found in capillary electropherograms as alkaloid residue solute in higher level arisen electropherogram peak. The volume regulate by repeating the catalytic process like in the capillary semiconductors [6].

Electropherogram show magnitude of the electron transfer promoted by hot water 135°C in catalysis. When so produced alkaloid extract was administered to by D-Galactosamine traumatized laboratory animals a rapid healing procedure was found in liver [7]. D-Gal N intraperitoneal injection was earlier found to mimic viral hepatitis among e.g. cytomegalovirus. It is common symptom of liver failure caused by hepatic viruses [8]. The first visual change which happened under the regeneration proceeds on livers of rats changed from tan to yellow or grubby brown.

It was discovered the disappearing of giant cells due to the prevented RNA polymerase numerous new sinusoids appeared trough liver anastomoses, which opened new routes for the blood flow and thus avoiding the obstructions of pathologically transformed injured liver. Thus electron transfer serves as a new, unemployed tool for pharmaceutical chemistry. The molecular passive self-organization permit a cooperative electron transfer which serves challenge to the chemistry to compose new pharmaceuticals e.g. against viral infections [6].

The Applied Biosystems (Model 230A of Perkin-Elmer Co) capillary electrophorese instrument equipped with UV detector was used for monitoring the alkaloid transfer situation in the CZE method in samples. The transition was tested with adult Long Evans rats. The evaluation of the impact on living animals was seen when the animals were sacrificed by decapitation and key organs, liver and kidney, were used for histological studies. In histological studies, Alcian blue or PAS staining and 280X magnification were used. The changes in the alkaloid mixture were determined by the naked eye. In the latest affection test, mice were used for detecting the influence on adult mice. The electopherograms benefited from the assumption that electron transfer had reached perfection level. In these cases, electropherograms had clearly changed on the higher level without any scattered findings.

Electron transfer in an alkaloid with the basic bis-benzylisoquinoline structure (Figure 1), and the formation in a different alkaloid unit caused acidity variability when treated in aqueous solution, which can lead to self-assembly of reactants [6]. It is assumed that energy conversion catalysis will result when the reactants are in close cooperation. In case, e.g. some of the cycle members were controlling and inter-regulating [6] with each other as in this case of the control of one alkaloid of the cycle. In such cases, local chemistry leads to self-assembly, which substantially improves both the efficiency and the selectivity of the electron transfer [6]. 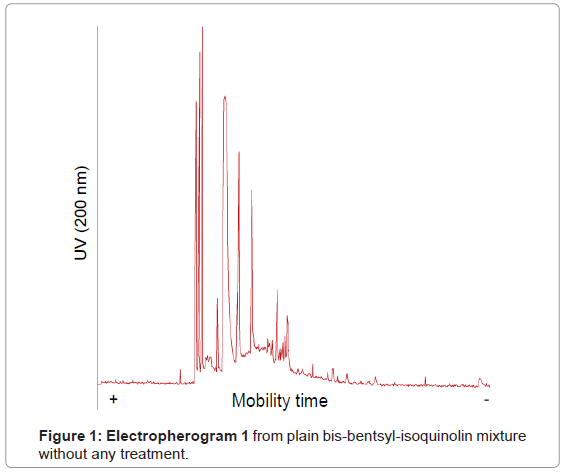 Figure 1: Electropherogram 1 from plain bis-bentsyl-isoquinolin mixture without any treatment.

The electropherogram carried out from alkaloid mixture processed after extraction with hot water temperature 135°C (Electropherogram 2 (Figure 2)). Theoretically, small molecules like water or oxygen can efficiently be involved in electron transfer. The obtained new peak includes the magic gift to trigger anastomoses formation. Electropherogram 3 (Figure 3) shows that the electrons transfer caused, in the electropherogram, an increased peak energy, which resulted in an epochal change in the test animals. 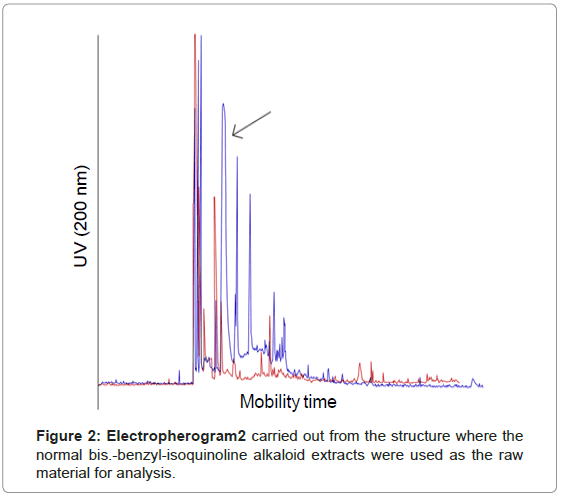 Figure 2: Electropherogram2 carried out from the structure where the normal bis.-benzyl-isoquinoline alkaloid extracts were used as the raw material for analysis. 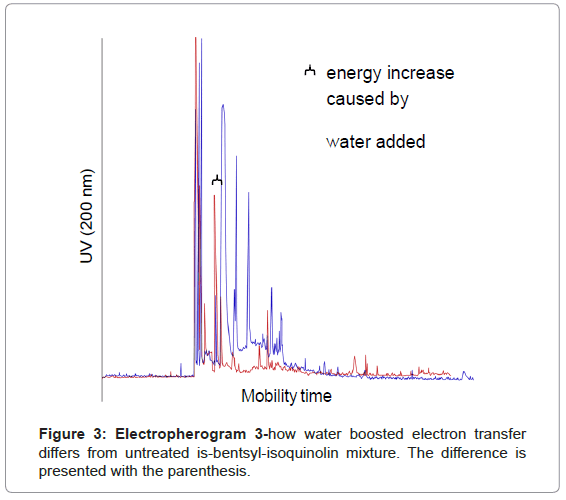 Figure 3: Electropherogram 3-how water boosted electron transfer differs from untreated is-bentsyl-isoquinolin mixture. The difference is presented with the parenthesis.

We can easily determine that the dominating peak had got more energy and, at the same time, the energy magnitude was weakened. The developed gained energy addition was extremely useful for the following steps, when the alkaloid extract without and with water treatment was administered to laboratory rodents. The big change in the animal liver was discovered when the test animals were killed and the liver removed from the stomach (Figures 4a and 4b).

The liver architecture was dramatically changed in liver sections processed for microscopic investigations [9]. A remarkable deposit of giant cells was found, brought about by the pile up of lymphocytes, binuclear cells, the RNA growth and cytomegalovirus formation [9]. Along with these, cells developed to make barriers the normal blood flow and blood circulation was obstructed. The virally injured liver includes a lot of binuclear and giant cells which were repressed because of liver failure [10], while common degradations were caused by architecturally natural obstructions as seen in all the figures presented in this study.

Obstructions which were caused by cirrhosis in the case of tissues were also released by opening the sinusoids, and the obstructions of liver fibrosis caused by liver cirrhosis [9] dispersed and were soon transported into the portal veins as is the case with dissipating material (Figures 5 and 6). Figure 5: Bis-benzyl-isoquinoline alkaloids’ therapeutic influence. a) on twoweek ThAA-pretraumatized liver8, b) in liver biopsy micrograph, alkaloid therapy effects are seen on the liver. There is oriented specific improvement in sinusoid architecture after two-week alkaloid treatment. The newly organized alternative blood flow is visible in sinusoids and even a well diminished amount of fibrosis was found. Figure 6: Therapeutic influence of electron-transferred alkaloid injections on D-GalN traumatized livers. (a) The traumatization mimics the lesions caused by hepatitis B virus10, when lesions were inside the cells In (b) the cell architecture was regenerated after a complex procedure, which is still awaiting detailed studies. The sinusoids are opened and the blockages causing giant cell growth have disappeared.

Simultaneously, a fast anastomoses formation was initiated, and lymphocytes, neutrophils, binuclear cells and giant cells were caused to disappear, thus improving the regeneration process. On the other hand, the cooperative multiple electron transfer in the alkaloid synergism is designing and controlling the molecular chemical environments of the electron-exchanging centre’s passive or dynamic self-organisation. Passive self-organisation is very attractive for energy conversion catalysis, because water can efficiently be involved in electron transfer as can be seen in our production procedure [6]. Electron flow through the energy bands of catalytic material must be designed in such a way as to permit passive self-organisation like in semi-conduction materials with the energy band character [6]. The dynamic molecular electron transfer remains a substantial challenge for manifold fields of theoretical and synthetic chemistry [6], e.g. in pharmaceutical chemistry, which is becoming a new chemical branch.

At the moment it is unclear why the semiconductor material triggers the anastomoses formation in the liver; maybe it is influenced by membranes and sinews. Perhaps it was a lucky accident facilitating this research. The influence of the D-2 receptor has been assumed on the mammalian body, but no adequate has ever been found [11]. However, the alkaloid therapeutic influence on the rodent liver seems to be very multidimensional starting from a remedy for cirrhosis [9] and extending to artificially virally infected livers, and according our findings, covers even the toxically damaged liver [10]. The extent of liver regeneration shows that the activation of blood free flow level is the key to liver regeneration (Figure 7).

The detailed structural properties of molecular systems are obligatory to make dynamic self-organized electron transfer possible to be obscure. But it seems to be clear that the macromolecular environment should be such that it can temporally store the excess of energy input [6]. Cooperative multi-electron transfer may already occur in the biological systems that have developed self-organisation to a high level of perfection [6]. As an example of this is, the obtained triggering of liver anastomoses formation in liver regeneration. This is the key to cure, e.g. common virally and microbial infected patients. Besides the many prevailing tropical diseases, even diarrhoea and antimalarial properties were estimated to be healed, those being a great plague in tropical regions [12].

Figure 7: One example of the situation when allyl-alcohol, a known hepatotoxic compound is used to damage (a) 6-day after the traumatization of the liver.11. At liver biopsy (b) after electron-transferred alkaloid-treatment the sinusoid starts to orient so that routes for free blood flow begin to open. This represents an early stage of the regeneration process.

The author is grateful to the Dental Clinic of the University of Turku for laboratory animals, and the PET Centre of Turku University is thanked for placing the laboratory instruments at his disposal.