Copyright: © 2012 Steiner WE, et al. This is an open-access article distributed under the terms of the Creative Commons Attribution License, which permits unrestricted use, distribution, and reproduction in any medium, provided the original author and source are credited.

Galanthamine hydrobromide (GAL HBr), approved material for treatment of mild to moderate Alzheimer’s disease, is a centrally-acting reversible acetylcholinesterase inhibitor (AChEI) that is currently under evaluation as a therapeutic countermeasure against organophosphorus G- and V-Series nerve agents, which can induce rapid lethality in guinea pigs and humans. It has been shown that upon combination with atropine (ATR) and pyridine-2-aldoxime methochloride (2-PAM), a single dose of GAL administered before or soon after the acute exposure to a lethal dose of organophosphorus compounds can safely counteract toxicity in guinea pigs. To that end a new sample preparation extraction method analysis assay has been explored to enable future high-throughput, reproducible, and sensitive assays for the extraction of galanthamine in guinea pig plasma. Samples were prepared with diphenhydramine hydrochloride (DPH HCl) internal standard and recovered with 10 min liquid-liquid trichloromethane extractions. Samples were analyzed with a reversed phase liquid chromatographic column interfaced to a triple quadrupole mass spectrometer (LC/MS/MS) operating in the positive ion multiple reaction monitoring (MRM) Turbo Ionspray mode. Precursor to product ion (M+H)+ transitions of 288-to-213 m/z and 256-to-167 m/z for GAL and DPH were observed, respectively. Sample run times of 1.50 min were achieved.

Organophosphorus compounds, since their early introduction in agriculture as a pesticide and later as weapons of mass destruction (WMD) in the form of chemical warfare agents (CWA), are a global concern for their toxicity in humans [1-3]. Organophosphorus G-Series (Sarin (GB), Cyclosarin (GF), Soman (GD), Tabun (GA)), and V-Series (VE, VG, VM, VX) compounds are one classification of CWA by convention, which act to severely disrupt neurological regulation within biological systems through their irreversible inhibition of the enzyme acetylcholinesterase (AChE) [4-6]. The degree of toxicity (e.g. chronic to acute) or severity of the disruption (e.g. mild to severe) arises from this direct inhibition of the AChE enzyme which causes the excessive accumulation of the neurotransmitter acetylcholine (ACh) to build up in synaptic junctions. This excessive accumulation of ACh in turn causes systemic symptomatic overstimulation of ACh receptors. The subsequent cholinergic crisis is indicative of muscarinic receptor overstimulation (miosis, lacrimation, bradycardia, bronchoconstriction, hypotension, and diarrhea), nicotinic receptor overstimulation and desensitization (intense skeletal muscle fasciculations followed by subsequent muscle weakness), and central nervous system related effects (nystagmus, ocular flutter, anxiety, restlessness, confusion, ataxia, tremors, seizures, respiratory paralysis, coma, and death) [7-10].

Currently, the standard approved therapeutic treatments to decrease slow aging organophosphorus agent toxicity like VX agents include atropine sulfate (ATR) to antagonize the muscarinic response, pyridine-2-aldoxime methochloride (2-PAM) to reactivate inhibited AChE enzymes, and benzodiazepines (BZD) to mitigate convulsant seizures [9-11]. For rapidly aging organophosphorus agents such as soman, pretreatment prophylaxis with the carbamate pyridostigmine bromide (PB) is necessary before post-exposure treatment with ATR, 2-PAM, and BZD [12-14]. All of these treatments; however, have significant well recognized limitations [15-17]. Galanthamine hydrobromide (GAL HBr), on the other hand, is an alkaloid synthesized synthetically or as an extract from the bulb and/or flowers of the Galanthus Caucasicus plant. GAL has been approved for the treatment of mild to moderate Alzheimer’s disease and has been sold as a dietary supplement for memory support. GAL has properties that make it a suitable candidate as a prophylactic and therapeutic countermeasure against organophosphorus poisoning. GAL is a centrally acting reversible acetylcholinesterase inhibitor (AChEI) that can cross the blood-brain barrier, exhibit anticonvulsant properties, and prevent neurodegeneration [18-21]. Thus, GAL is currently being studied by several investigators as a countermeasure against organophosphorus nerve agent-induced lethality in rodent animal models [22-24]. When administered alone, ATR and 2-PAM do not enhance survival against lethal nerve agent challenge in guinea pigs. However, when combined with ATR and 2-PAM, a single dose of GAL administered before or soon after the acute exposure to a lethal dose of slow or rapid aging organophosphorus nerve agent compounds GAL can safely counteract their toxicity in guinea pigs [23].

In contrast to other rodent models, guinea pigs, have lower levels of circulating butyryl cholinesterase (BuChE) enzymes (e.g. scavengers for CWAs) in their blood stream similar to nonhuman primates and humans, which in turn makes guinea pigs an appropriate nonprimate animal model to predict the effectiveness of GAL therapy for organophosphorus poisoning in humans [17,22,25,26]. To this end, it is imperative to accurately and precisely extract GAL from guinea pig plasma. Interestingly enough only a few assays have been reported for the extraction of GAL in biological plasma fluids. The first development was in the use of high performance liquid chromatography (LC) combined with ultra-violet or fluorescence detection [27-29]. These assays all suffered from high plasma sample volume requirements, extended time consuming extraction procedures, low sensitivity, and low selectivity. Realizing these sample preparation and instrumental shortcomings researchers soon moved on to techniques that not only employed the separation power of LC but combined that with the low plasma sample requirement, high sensitivity, and high selectivity of triple quadrupole mass spectrometry (MS/MS) detection [30-32]. While these assays have shown a variety of improvements they have all been primarily developed for human plasma samples and have not been explored for the rapid extraction of therapeutic doses of GAL in guinea pig plasma. With this in mind this review article seeks to expand upon the use of LC/MS/MS to explore the feasibility of using a new sample preparation extraction method analysis assay with diphenhydramine hydrochloride (DPH HCl) as an internal standard to enable a highthroughput, reproducible, and sensitive assay for the extraction of galanthamine in guinea pig plasma. 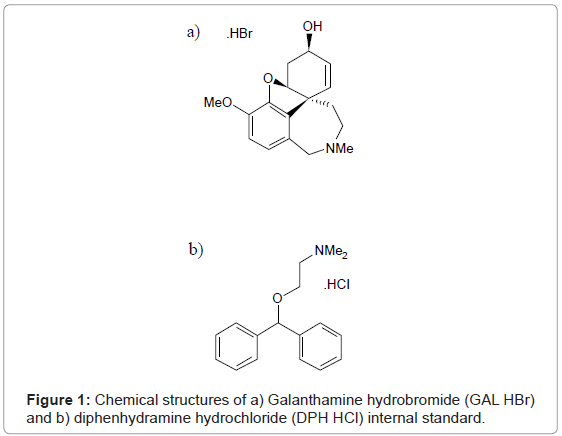 All 160 μL guinea pig plasma samples were vortex mixed for 10 s with spiked 40 μL aliquots of 1.25 μg/mL DPH internal standard working solution. GAL extraction was then accomplished by the addition of 1.4 mL of trichloromethane followed by 2 min of vortex mixing and 3 min of centrifugation at 2000 g. The upper organic layer was evaporated to dryness under nitrogen at 45°C for 5 min and the dry remaining residue was reconstituted with 100 μL of HPLC mobile phase (35% B).

Organic solvents (hexane, carbon tetrachloride, toluene, methyl t-butyl ether, methylene chloride, and trichloromethane) were selected as potential candidates via their type, Snyder polarity index (P’), and boiling point to maximize GAL and DPH liquid-liquid extraction recovery from guinea pig plasma [33]. Depending upon which type of organic extraction solvent was used the P’ for that solvent consisted of three main contributions, xe (interaction with ethanol - proton acceptors), xd (interaction with dioxane - proton donors) and xn (interaction with nitromethane - dipole-dipole interactions) that could be fine tuned for chromatographic separation integrity and extraction recovery selectivity. Consideration was also given in the selection process to organic solvents with lower boiling points in an effort to increase the rate at which the upper organic layer could be evaporated in the sample preparation process. Thereby, minimizing the rate-limiting time step needed for sample preparation. Ultimately, trichloromethane with a P’ value of 4.1 (e.g. 0.1 for non-polar hexane and 9.0 for polar water) and a boiling point of around 61°C was used. Optimal extraction recoveries as determined by comparing the peak area for plasma samples for three replicate inter-batch assays that were spiked before and after extraction were obtained for both GAL (0.025 (8.69 nM), 0.25 (86.9 nM), and 1.00 μg/mL (348 nM)) and DPH (0.25 μg/mL (97.9 nM)) in 10 min with a trichloromethane liquid-liquid extraction.

Chromatographic mobile phase composition with a continuous isocratic ratio of (65:35, v/v) mobile phase A (0.05% formic acid, 0.2% glacial acetic acid, 99.75% HPLC grade water) to mobile phase B (0.1% formic Acid, 9.9% HPLC grade water, 90% methanol) was found to be optimal for both chromatography and mass spectrometry ionization efficiency after many trials when combined with a Waters Symmetry Shield 3.5 μm packed RP18 guard (3.9 mm×20 mm) and analytical (4.6 mm×75 mm) column assembly. From a chromatography perspective, the combination of select mobile phase solvent constituents (e.g. methanol organic modifier and formic acid to displace ion pairs) and stationary phase media type (e.g. shielded silanol non-polar RP18 packing) provided an environment in which equilibrium chemistry could take place between the two phases to provide improved Gaussian peak shapes with consistent baseline resolution, as seen in Figure 2, for GAL and DPH in a relatively short amount of time (i.e. 0.83 and 1.17 min, respectively). From a mass spectrometry perspective the use of key mobile phase solvent constituents (e.g. formic and acetic acid) helped to greatly improve the sensitivity of the analysis by increasing the positive ionization efficiency in the source region of the mass spectrometer. 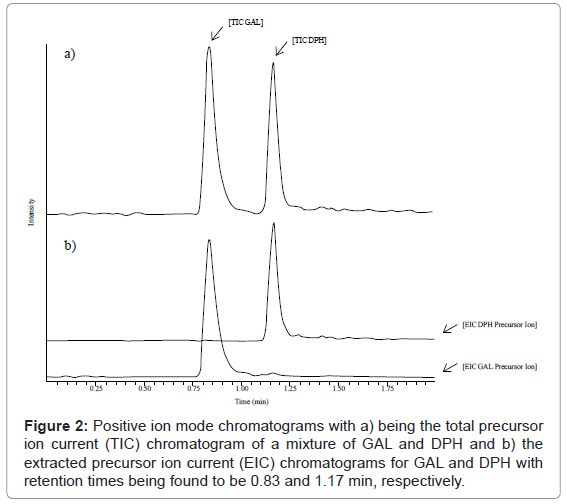 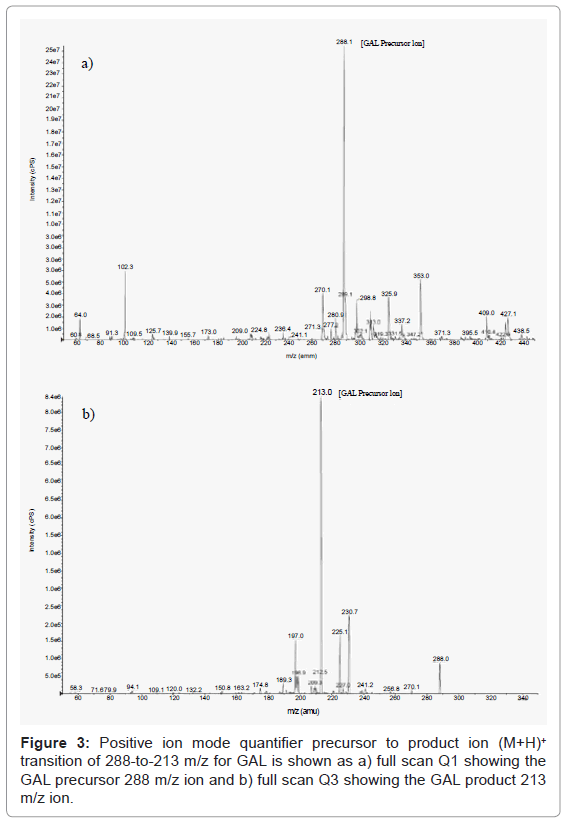 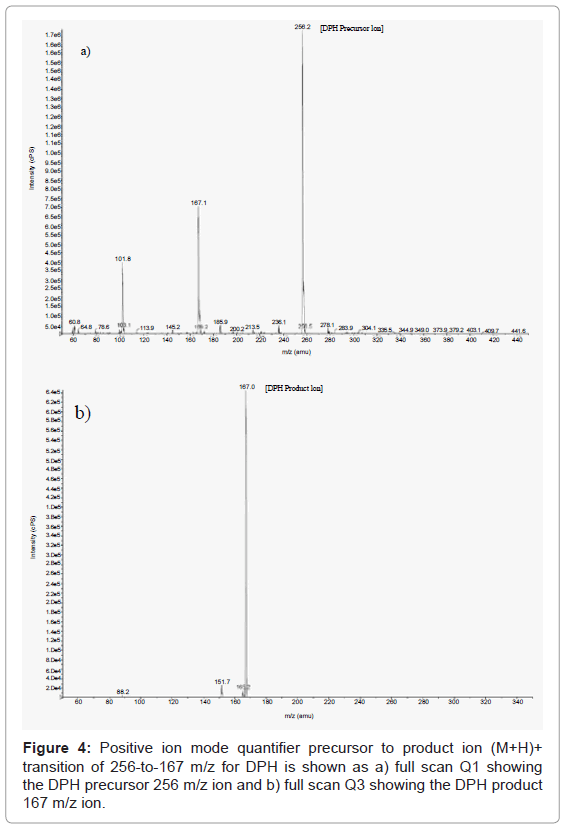 The review of a new high throughput sample preparation extraction analysis assay has been explored with commercially available materials to enable future researchers the ability to reproducibly and sensitively extract galanthamine from guinea pig plasma. The sample preparation employing a 10 min trichloromethane liquid-liquid extraction gave consistent extraction recoveries of GAL and the internal standard DPH from 160 μL plasma sample volume. The LC/MS/MS analysis method operated in the positive ion MRM Turbo Ionspray mode yielding highly selective quantifier precursor to product ion (M+H)+ transitions for GAL (288-to-213 m/z) and DPH (256-to-167 m/z). Sample run times where on the order of 1.50 min per sample. Most importantly, it is envisioned that this new extraction assay with low sample volume requirements, rapid GAL extraction recovery, and rapid sample runtimes would be beneficial to not only a wide range of researchers researching pharmacokinetics, bioavailability, or bioequivalence studies but of more specific interest to researchers exploring applications of organophosphorus nerve agent poisoning countermeasures in guinea pigs and humans.

The authors would like to acknowledge: Dr. James Bruce’s Laboratory from the University of Washington’s Department of Genome Sciences, Seattle, WA; This work is supported in part by the University of Washington’s Proteomics Resource (UWPR95794); Dr. Jeff Jones’s Laboratory from Washington State University’s Department of Chemistry, Pullman, WA for open use of a variety of liquid chromatography and mass spectrometry instrumentation; and the United States Army Medical Research Institute of Chemical Defense (USAMRICD), Aberdeen Proving Grounds, MD, for their continued scientific correspondence and support.