This is a cross sectional study conducted in the National Center of Public Health Laboratories (NCPHL) of Aden – Yemen, during October-December 2011, with an overall aim to compare the results of platelet count by the automated versus the manual methods.
Study included 190 random samples, examined with confirmatory platelet estimate done by the stained thin blood film. The mean platelets count estimated by the manual method was 225.2 ± 95.4 × 109/L, while that estimated by the automated method was 245.7 ± 109.8 × 109/L, with no significant statistical difference between both means (p>0.05).
The Pearson correlation test showed significant positive correlation between both methods (r: 0.563), this correlation remained significant when the samples of normal count by the two methods were correlated (r: 0.359), but it was insignificant negative correlation when the samples of low or high counts by the two methods were correlated (r: -0.151 and -0.559) respectively.
This study concluded that significant positive correlation is present between the manual and the automated counting methods of platelets and recommended that platelet count is not varied when done by manual or automated methods, but in every method, it should be accompanied by platelet estimate, especially with abnormal counts.

Platelets have proved more difficult to count than red or white cells [1]. For many years the Brecher and Cronkite method [2], originally described in 1950 was considered to represent the optimum compromise between accuracy, time and cost, and until comparatively recently, was the reference against which semi-automated and automated methods were compared.

The reasons for improving platelet counting, particularly in severely thrombocytopenic patients, stem from current hemato-oncological practice in relation to post chemotherapy bleeding and prophylactic platelet transfusions. This was very adequately summarized in the ‘Consensus Statement on Platelet Transfusion Therapy’ by the Royal College of Physicians Consensus Conference [3].

In the daily practice, an increasing request for platelet count in the NCPHL was observed, as well as a need for accurate count by some physicians which is attributed to the presence of increasing cases of thrombocytopenia associated with various conditions such as leukemia, chemotherapy for various malignancies and viral diseases (mainly Dengue Fever) which was reported last years in some governorates in Yemen.

In the NCPHL, some results of electronic platelets counts were not accepted by physicians, especially for hematology and oncology patients. Some physicians request the repeat of platelet count manually once the result of electronic count does not correlate with the clinical condition of the patient, and others prefer the automated count since they lost credibility in the results of manual counting method. It was decided to conduct this study by counting platelets manually (by the use of hemocytometer chamber) confirmed with platelet estimate by the stained thin blood film, and comparing the result with the automated platelet count for the same sample at the same time to give conclusive advice that will help in evaluation of patients with abnormal platelets count.

To compare the results of the automated with the manual methods of platelet count in the NCPHL of Aden.

This is a cross-sectional study, involved randomly selected blood samples of patients attending the NCPHL in Aden during October through December 2011.

The randomly selected samples were 190 blood samples of patients attending the NCPHL with any diagnosis during the study period. Selection was by the simple random sampling, blood samples were taken each day by the even numbers, i.e. samples number 2, 4, 6, 8… etc.

Data of age and sex of patients were taken from the laboratory forms without meeting patients. Samples were examined by the trained hematology technicians in the NCPHL, processed by the automated counter using the Sysmex® KX-21N and manually by the hemocytometer at the same time, in addition to platelet estimate by the thin blood film, stained with Lishman’s Stains.

Data processing was performed by the Statistical Program (SPSS 18). Data were tested by the student t-test for two means and the hypothesis test for two proportions. Simple regression analysis and coefficient of determination (r) for correlation analysis between the two methods was used [4]. All tests were applied at a level of significance (α=0.05). P-values of ≤0.05 were considered as statistically significant.

This study was approved by the ethical committee of Ministry of Public Health and Population. The study was dealing with blood samples from the lab. All the obtained data were handled confidentially, instead of reporting the name of patients, serial numbers were used.

Table 1: The mean platelet count by manual versus automated methods according to sex and age of patients.

In relation to the age of patients, the mean platelets count did not show significant difference between the two methods in all age groups (Table 1).

By using the Pearson correlation test, there is significant positive correlation between the result of both methods for the whole samples (r=0.563, p<0.001) (Figure 1). 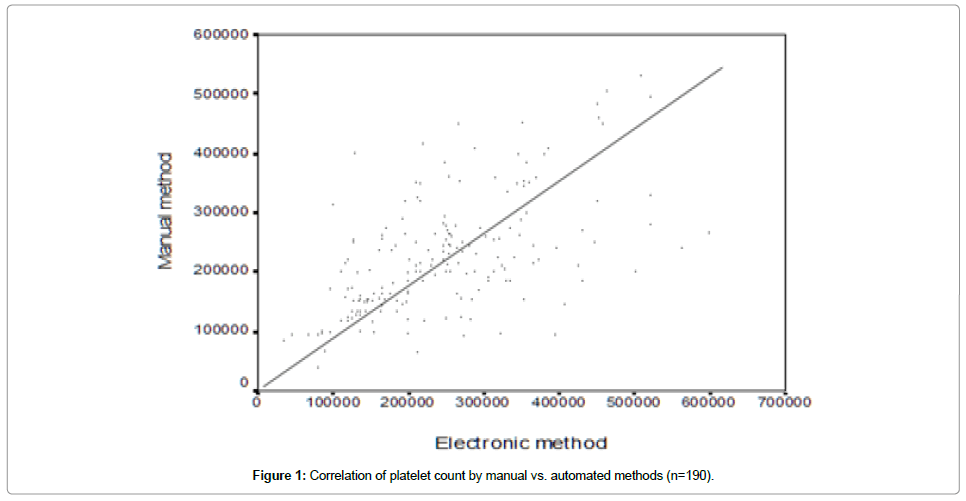 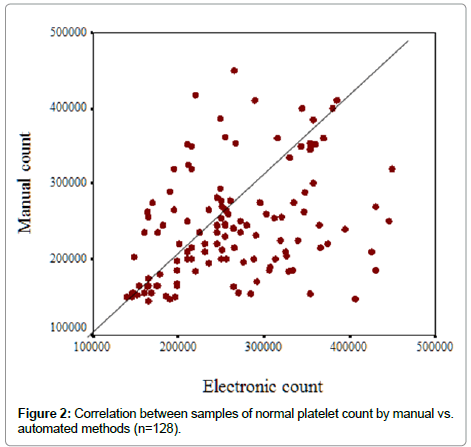 When the correlation test was applied for the 50 samples with low count by either method, there is negative correlation between the result of both methods (r=-0.151, p=0.29) (Figure 3). 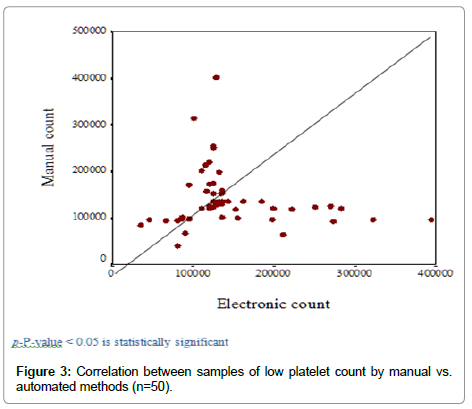 When the correlation test was applied for the 12 samples with high count by either method, there is negative correlation between the result of both methods (r=-0.559, p=0.06) (Figure 4). 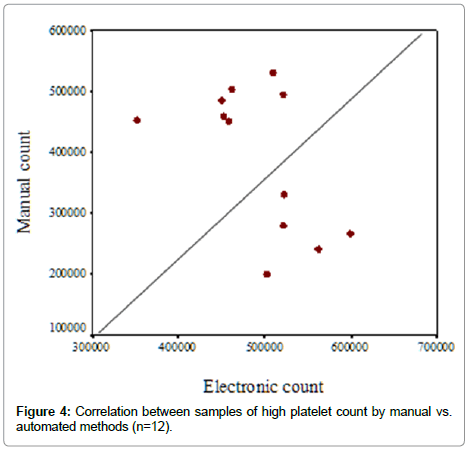 Up to date, the only “Gold Standard” in platelet counting available to assess any degree of accuracy of the automated count has been the manual phase-contrast microscopic method. The manual method itself has significant limitations in terms of performance, particularly in the area of imprecision. Recently, a joint Task Force of the ISLH and the ICSH recommended a new immunologically based reference method [3]. This immunological method is not available in our labs and so we are still depending on the manual method and in need to confirm the results once there is an abnormal count. Because of that we conducted this study by the help of platelet estimate on blood film which is an arbitrary method of assurance in the absence of new immunological methods.

The studied samples represented patients who are complaining of various diseases, which may or may not affect platelet count. The mean platelets count estimated by the manual method and the automated method for all the studied samples (n=190) did not show significant statistical difference (p=0.44). This means that both methods can be used to count platelets without producing a significant difference in results [5,6].

Even when the samples are separated according to sex and age of patients, we did not obtain any significant difference in counting platelets manually or automatically in males or in females, in younger or in older patients.

These findings may be attributed to the presence of high number of samples with normal count (about 128 samples were normal by both methods). This large number dominates in the correlation of all sample and yields positive correlation. Meanwhile, samples of low count (50 samples) or those of high count (12 samples) may not be enough to show such positive correlation, and so we cannot rely on either method alone once there is suspicion of low or high count and the performance of platelet estimate is mandatory in such situations.

In the study of Charie LA et al. [7], when they evaluated 88 specimens with platelet counts of ≤ 20 × 109/L tested in 3 studies, the automated analyzer counts matched the platelet reference count method in 87 cases, representing an agreement of 98.9%. That is in low platelet counts there should be another reference method which is reliable like the method used by Charie LA et al. [7] (immunologically based method). However, due to the low technical ability in the CPHL in Aden, our physicians should rely on the results obtained by the automated analyzer once there is an additional confirmatory platelet estimate.

Physicians are advised to rely on the NCPHL analyzer results, in such lab, experience technicians are responsible for the daily work in addition to a periodic quality control measures are applied. Medical decisions should not be delayed awaiting for repeat or confirmation as Steele BW et al. [8] reported in their study (2001), where they found that analyzer results can be used for medical decision making without long delays for repeat and confirmatory testing.

In counting platelets by manual or electronic methods, the sex and age of patients are not associated with significant difference in the count.

Platelet estimate is an important step in assessment of platelet count and it should be done for every sample of platelet count, especially when the count is lower or higher than normal by any method.

A significant positive correlation is present between the manual and the electronic counting methods of platelets. This correlation is not valid for samples of low or high counts.

This study recommends that platelet count is not varied when done by manual or electronic methods, but in every method, it should be accompanied by platelet estimate.

It is important to acknowledge the efforts of all members in the department of hematology in the NCPHL of Aden.

Copyright: © 2013 Bakhubaira S. This is an open-access article distributed under the terms of the Creative Commons Attribution License, which permits unrestricted use, distribution, and reproduction in any medium, provided the original author and source are credited. 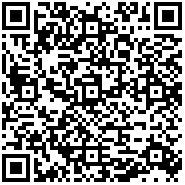