Copyright: © 2010 Salvi VS, et al. This is an open-access article distributed under the terms of the Creative Commons Attribution License, which permits unrestricted use, distribution, and reproduction in any medium, provided the original author and source are credited.

A simple and precise method for the determination of Tinidazole and Ciprofloxacin hydrochloride from its single formulation tablet has been developed using differential pulse polarography. Tinidazole and ciprofloxacin produces a cathodic wave at -0.38 V and -1.30 V respectively versus S.C.E in a solution of pH = 6.5 (Britton Robison buffer). The dynamic range for Tinidazole, is 0.50 to 279.31μgcm -3 and for Ciprofloxacin, it is 24.39 to 245.28 μgcm -3 . The method has been validated and applied successfully for the determination of the two drugs from their respective formulation.

Tinidazole (TNZ) [1-(2-ethylsulfonylethyl)-2-methyl-5-nitroimidazole] is a 5-nitroimidazole derivative, an anti-parasitic drug used against protozoan infections. It is also used in the treatment of a variety of amoebic and parasitic infections. Ciprofloxacin Hydrochloride (CIPRO) [1-cyclopropyl- 6-fluoro- 4-oxo- 7-piperazin- 1-yl- quinoline- 3-carboxylic acid] is used in the treatment of bacterial infections. It is a second generation floroquinolone antibacterial. Several methods have been reported with the different voltammetry techniques such as adsorptive stripping voltammetry, polarography etc. [1-12].

Differential pulse polarography was carried out using an Autolab PGSTAT 30 with 663 VA electrode stand of Metrohm. The three- electrode system consist of saturated calomel electrode as a reference electrode, HMDE as a working electrode and platinum electrode as a auxiliary electrode. The pH measurements were made with an Equip-Tronic pH meter model no. 610.

TNZ and CIPRO standards were obtained from Mayer Organics Pvt. Ltd. and formulations used for analysis were ‘Tiniba 300’ (Cadila Healthcare Ltd., India) and ‘Fasigyn 500’ (Pfizer, USA). 1M KCl was used as supporting electrolyte and Britton-Robinson buffer of pH 6.5 as a buffer solution in cell . All the solution were prepared in distilled water and analytical-reagent grade chemicals (Merck) were used.

A stock solution of 1000µgcm-3 for both was prepared by dissolving 25mg of the standard to the respective volumetric flask and making up the volume to 25 cm3 with distilled water. Britton- Robinson buffer was prepared by mixing 0.04M boric acid, 0.04M phosphoric acid and 0.04M glacial acetic acid and adjusting the pH to required value with 1M NaOH.

The optimization of experimental condition and parameters has been done to get uniform, less tailing, less broadening peak shape with normal baseline. The polarographic response for TNZ and CIPRO was examined in different buffer solutions such as Britton-Robinson, phosphate, carbonate and acetate buffer. The Britton-Robinson buffer of pH 6.5 was chosen as a best, as both the analytes give well defined peak in the same pH condition. As the concentration of TNZ increases the slight negative shift in potential was observed whereas the increase in the concentration of CIPRO tends a positive shift in the potential.

The polarogram was also observed with different supporting electrolyte like KNO3 , KCl, NaCl and peak height was found to be maximum in presence of KCl.

No significance interference was observed from excipients which are commonly used in the formulation.

An aliquot of (18 cm3) of the Britton-Robinson buffer of pH 6.5 was placed in the voltammetric cell, 1M KCl (2 cm3) was added as a supporting electrolyte. The solution in cell was purged with nitrogen gas for 180 seconds. The recording of polarogram was carried out in voltage range of 0.0V to -2.0V vs SCE with scan rate of 15 mVs-1 and pulse amplitude of 50 mV. After recording blank polarogram, aliquot of definite volume was added to the system. It was observed that TNZ and CIPRO give a well defined cathodic peak at -0.38V and -1.30V respectively. The calibration curves were constructed for the concentration added against the current obtained for each addition.

The two commercially available formulations ‘Tiniba 300’ and ‘Fasigyn 500’ were used for determination of TNZ whereas ‘Ciplox 250’ and ‘Cifran 250’ used for the determination of CIPRO. Ten tablets of each sample were weighed and powdered separately. The weight of the powder equivalent to 25 mg of analyte was weighed and transferred to a 25 cm3 volumetric flask and the volume was made up to the mark with distilled water. The solution was subjected to vigorous shaking for 5 minutes

Then, definite volume of the supernatant solution was transferred in to a volumetric cell containing de-aerated Britton- Robinson buffer of pH 6.5. The polarograms were recorded under the optimum experimental conditions. The amount of TNZ and CIPRO were calculated from resulting current values using already constructed calibrations graphs.

In determination of TNZ and Cipro , TNZ gives wide range of linearity from 0.50 to 279.31µgcm-3 where as linearity for Cipro is 24.39 to 245.28µgcm-3. The working range selected for TNZ was 14.28 to 100.0µgcm-3 and for CIPRO it was taken as 24.39 to 100µgcm-3. The quantitative determination of both the analytes has been done by both calibration and the standard addition method. The validation parameters and results for both analytes are shown tabulated in Table 1, Table 2, Table 3 and Table 4. The method is validated as per ICH guidelines [13].

The addition of the standard solution to the drug sample solution did not change the characteristics of differential pulse polarogram. This gives the validity of method for the determination of analyte from its pharmaceutical formulation.

Linearity: The linearity range for the analyte was obtained by subsequent addition of analyte solution to the blank solution. TNZ gives wide linearity range from 0.50µgcm-3 to 279.31µgcm-3. CIPRO was found to be linear from 24.39µgcm-3 to 245.28µgcm-3. The calibration curves were constructed with concentration (C) against peak current (Ip) and calibration equations were found to be y = 37.4345x + 0.0482 and y = 4.6480x + 18.5140 for TNZ and CIPRO respectively. Coefficient of correlation for both the curves was found to be 0.999. The linear polarogram for TNZ and CIPRO is shown in Figure 1 and Figure 2 respectively. 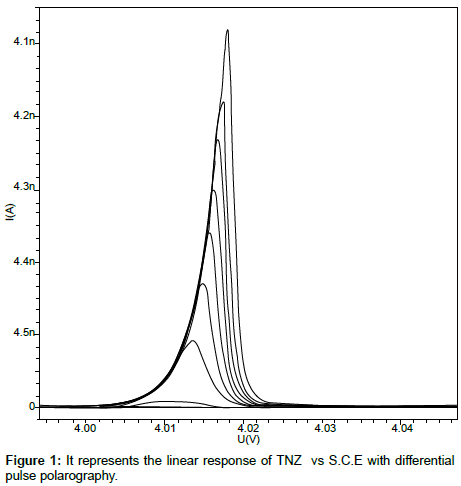 Figure 1: It represents the linear response of TNZ vs S.C.E with differential pulse polarography. 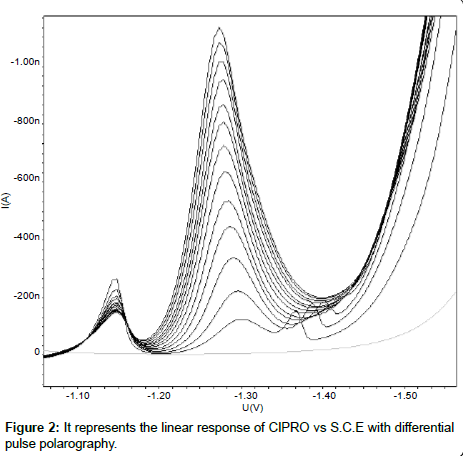 Figure 2: It represents the linear response of CIPRO vs S.C.E with differential pulse polarography.

Limit of detection and limit of quantification

It was observed that at each concentration the RSD value calculated was within the limit for intra – day as well as inter – day precision.

The accuracy of the method for the determination of both the analyte was tested by standard addition method. Recovery of both analytes has performed at three levels, 20 , 120 and 220% of amount of sample added, as shown in Table 3 and Table 4.

In this work, the optimum condition for the polarographic determination of TNZ and CIPRO in the tablet of single formulation is described. The presented method is simple and accurate, can be used for routine analysis for determination of both the analyte. 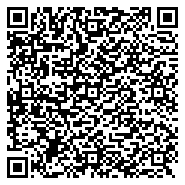