Effect of Nutrisim on Endotoxic Shock Induced by Lipopolysaccharide from Escherichia coli: 0111:B4 in Rats: Structural Study of Liver, Kidney and Lung

Bacterial Lipopolysaccharide (LPS) is a glycolipid component of the cell wall of Gram-negative bacteria and is an endotoxin implicated in triggering sepsis and septic shock. Sepsis and its sequelae represent a continuum of clinical syndrome encompassing systemic inflammation, coagulopathy, abnormalities of the renal, hepatic, pulmonary, and hematologic systems followed by multi-organ failure. NutriSim©, a nutritional supplement, has previously been tested in an experimental model of septic shock; for example, a single dose of NutriSim© diminishes significantly the production of serum proinflammatory cytokines, attenuates the oxidative stress markers and preserves membrane fluidity in rat liver mitochondria. Therefore, the aim of the present study was to evaluate the protective effect of NutriSim© on survival and histological alterations in liver, kidney and lung associated with endotoxic shock induced by LPS. The results in this work showed that treatment with a single dose of NutriSim© 15 min prior or after LPS challenge, effectively protects the morphological damage in vital organs such as liver, kidney and lung, and improved the survival rate of LPS-treated rats. In conclusion, a single dose of NutriSim© in a septic shock model induced by LPS appears to effectively protect vital organ damage from morphological injury and reduces mortality.

Septic shock can be considered analogous to endotoxic shock or endotoxicosis, and designates the state of acute circulatorymetabolic dysfunction, which is initiated after the release in the body of bacterial endotoxins secondary to a septic process initial or subsequent to the isolated experimental endotoxin administration, respectively. Endotoxins are macromolecular complexes formed by Lipopolysaccharide (LPS), and proteins localized in the outer membrane of Gram-negative bacteria and pathogenesis from these organisms can arise during systemic exposure to either; whole bacteria or their constituents [1]. Recognition of bacterial components such as LPS by the innate immune system triggers the release of potent mediators of inflammation, which result in an exaggerated pathogenic inflammatory response in the circulation and vital organs [2]. Exposure to LPS can produce an array of pathophysiological changes including hypotension and cytotoxic lesions as well as functional and metabolic disturbances in different organs [3,4]. It has been well established that LPS alters cellular redox status [5].

The liver is one of the most important organs with regard to the production and effects of tumor necrosis factor alpha (TNF-α). Liver Kupffer cells or macrophages are major sources of production of TNF-α, in response to bacterial LPS [6]. Furthermore, TNF-α and other pro-inflammatory mediators, such as nitric oxide, superoxide, eicosanoids and interleukin-1 and interleukin-6, are excessively released into circulation which may alter the liver functions, resulting in changes in the integrity of liver vasculature [7] or the regulation of liver cytochrome P450 contents and metabolic capacity [8]. Current evidence indicates that TNF-α production drives mitochondrial reactive oxygen species generation; oxidants must play and into inflammatory mitochondrial damage [9]. Endotoxin accumulates in tissues rich in cells of the reticuloendothelial system such as liver and spleen [10] and induces increasing hepatic levels of end-products of lipid peroxidation such as Malondialdehyde (MDA) and 4-hydroxyalkenals [5]. In addition, bacterial endotoxins induce physiological and morphological changes [11]; in a histological analysis it has been reported that livers from endotoxin-treated animals showed an acute cellular infiltration (especially by polymorphonuclear neutrophils), cloudy swelling of the cells and an eosinophilic cytoplasm [5]. This may be a reason for organ dysfunction upon excessive inflammatory response mediated by endotoxin.

It has been proposed that inhibiting LPS-induced production of these proinflammatory mediators by antioxidants may prevent the pathology of endotoxic shock Antioxidants are substances that react with oxygen free radicals; they stop tissue oxidation by processes involving radical scavenging and other mechanisms [12]. Previously, we showed that a single dose of NutriSim© (10 μl/100 g of body weight), prior or before the endotoxic insult diminishes significantly the production of serum TNF-α, IL-1 and IL-6 [13] and attenuates the oxidative stress markers and preserves membrane fluidity in rat liver mitochondria [14]. NutriSim© is a nutritional supplement that contains arginine, lysine, choline, ammonium chloride, calcium and magnesium. It is used empirically for several degenerative diseases. The aim of the present study was to test the ability of NutriSim© to counteract the effects of the LPS on morphological changes in vital organs and survival.

One hundred adult male Wistar rats used for this research work were obtained from CIBO-IMSS (Guadalajara, Jalisco, Mexico). The animals weighed 200-250 g were maintained on a 12 h/12 h lightdark cycle at (22 ± 2°C, fed with standard diet (Purina 5001 (Table 1), for diet composition) and water ad libitum. Lipopolysaccharide (from Escherichia coli, serotype 0111:B4) was purchased from Sigma Chemical Co. (St. Louis, MO, USA), and NutriSim© was acquired from Laboratorios BioSim© (D.F., México). All animals received humane care in accordance with international guidelines on the ethical use of animals, and the “Norma Oficial Mexicana NOM-062-ZOO-1999”.

Animals were randomly assigned to five experimental groups (ten rats per group) as shown below.

Animals were sacrificed at 15, 30 and 60 min after the last injection and tissues were collected immediately.

In a second experimental series, rats (ten rats per group) were treated as above and survival was tested by Kaplan-Meier survival analysis also known as “Product limit”. Survival gives exact portions because it uses precise survival times. Individual times are known in which the animals die. Additionally, survival curves were compared using the log-rank test.

The organs (liver, kidney and lung) were extracted at each time point and immediately fixed by immersion with 4% paraformaldehyde in 0.1 M phosphate buffer solution (pH 7.4) at room temperature. Then they were dehydrated in graded concentrations of ethanol (70, 80, 90 and 100%); the organs were embedded in paraffin. From each organ, 4 μm thick sections were obtained and stained with hematoxylineosin to evaluate morphology and examinated under light microscope (Axioskop Zeiss photomicroscope). All sections were analyzed and the respective photomicrographs were obtained. 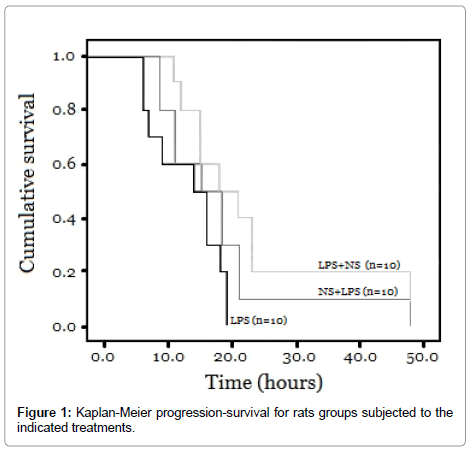 Liver: No pathological changes were seen in the livers from saline and NutriSim© control groups (Figure 2). No alterations were detected in the group of rats treated with LPS after 15 minutes of treatment. However, at 30 minutes severe congestion, sinusoidal dilatation, oedema, and hypertrophy of Kupffer cells were seen. At 60 minutes, there was a moderate to severe vascular congestion, moderate cytoplasmic vacuolization, hemorrhage and cell death. In the group that was treated with LPS and subsequently received NutriSim©, we do not detect any pathological changes after 15 minutes. However, moderate cytoplasmic vacuolization was exhibited at 30 minutes, while moderate-severe cytoplasmic vacuolation and moderate-severe vascular congestion was observed at 60 minutes after treatment. The LPS group pre-treated with NutriSim© do not showed any alteration at 15 minutes. This group showed a slight congestion at 30 minutes and a moderate congestion at 60 minutes. Kidney: Light microscopic examination of Kidneys of salinecontrol rats exhibited a typical and normal structure (Figure 3), In the NutriSim© control group, no histological alterations were observed at 15 and 30 minutes, however, mild congestion of kidney was detected after 60 minutes. Among the LPS group with sepsis, the microscopic changes in the kidney tissue specimens were the following: any alterations at 15 minutes; a slight congestion and hydropic degeneration (tubular oedema) at 30 minutes; tubular oedema and moderate-severe congestion at 60 minutes of treatment. The group that received LPS and subsequently NutriSim© showed the following features: normal structure after 15 minutes; at 30 and 60 minutes exhibited mild congestion, and glomerular tubular mild oedema. The LPS group pre-treated with NutriSim© showed normal structure at 15 minutes. In addition, at 30 minutes the tissue showed oedema, congestion and mild-moderate edema and at 60 minutes the tissue had congestion and moderate-severe edema. We reported previously that intraperitoneal administration of Lipopolysaccharide (Escherichia coli, serotype 0111:B4) evoked a robust systemic response that induced a stereotypical proinflammatory cytokine release [13,15]. In addition, bacterial lipopolysaccharide induces morphological changes in many tissues [5]. It has been demonstrated that lipopolysaccharides initiates lymphocyte transformation, macrophage activation and blood coagulation [16,17], stimulates oxidative stress and pro-inflammatory molecules release from macrophages [18], leading to a state of organ failure and potential death. Multi-organ failure/dysfunction syndrome correlates with poor outcome during endotoxin shock. Therefore we also investigated organ damage in the liver, kidney and lung. In this work we demonstrate that a single dose of NutriSim© in an experimental model of septic shock induced by LPS shows effectiveness on survival rate and exerts a beneficial effect on a histological analysis in vital organs, like liver, kidney and lung.

The exact mechanism by which NutriSim© causes the molecular events able to block LPS-induced cellular damage is still far from being completely understood. It could be hypothesized that this nutritive supplement acts at a cellular level ameliorating damage caused by oxidative stress and damage induced by endotoxins, therefore increasing the survival rate. It has been demonstrated that endotoxemia can lead to higher levels of ROS and oxidative damage impairs mitochondrial function and ATPase synthase activity [19], thus leading to a possible morphological damage in vital organs. Previously, we found that NutriSim© treatment prior or after the LPS challenge significantly attenuates the end-products of lipid oxidation, restores total antioxidant capacity, the membrane fluidity and preserves mitochondrial ATPase activity [14]. Accordingly, it was found that pretreatment with NutriSim previous to the septic shock induction with LPS significantly reduced and mitigated damage to the liver and lung, whereas in the treatment of LPS previous to the NutriSim administration we found that kidney damage was reduced. The liver is one of the most important organs, it is well known that it is also the main target of lipopolysaccharides, especially Kupffer cells; these hepatic macrophages engulf lipopolysaccharides by phagocytosis [20], leading to a possible physiological as well as morphological changes. When Nutrisim was supplemented it resulted in a significantly reduced attenuation of histological damage to liver, as well as for the kidney and lung in this LPS-induced endotoxin shock model compared to the LPS group. The sampling for histological analysis was performed at short times corresponding to the observations of clinical symptoms and determination of pro-inflammatory cytokines [previous work]. In this work for the histological analysis the time for the survival determination lasted (48 hours), therefore the structural damage at this period of time appears to be more severe, as we observed in the analysis in the organs mentioned above. These pathological changes are significantly attenuated when the rats were treated with NutriSim© showing a protective effect either administering before or after the induction of septic shock with LPS.

Finally, NutriSim can attenuate the damage caused by LPS, decreasing clinical symptoms including shaggy hair, diarrhea and prostration (data not showed), In conclusion NutriSim© may have a protective effect in presence of a compromised condition, like endotoxemia.

Copyright: © 2013 González-Renovato ED, et al. This is an open-access article distributed under the terms of the Creative Commons Attribution License, which permits unrestricted use, distribution, and reproduction in any medium, provided the original author and source are credited.