Estimation of Pharmacokinetics of Propofol in Indian Pateints by HPLC Method

Copyright: © 2011 Puri A, et al. This is an open-access article distributed under the terms of the Creative Commons Attribution License, which permits unrestricted use, distribution, and reproduction in any medium, provided the original author and source are credited.

A quick and sensitive reversed phase high performance liquid chromatography (HPLC) method has been developed in Indian surgical patients to determine the concentration of Propofol In human plasma. Propofol can be isolated from human plasma by adding 1ml precipitating solution which consists of acetonitrile and perchloric acid (67:33) mixture, which also contains dibutylpthalate (1mg/ml) as an internal standard. The sample is mixed for two minute on a vortexer. The plasma substance precipitated by acetonitrile and perchloric acid are further separated by centrifugation. The supernatant is directly injected into the HPLC system with the help of autosampler.

The analysis was carried out using column 250 × 4.6 mm column packed with10-μm Spherisorb reversed phase octadecyl silane particles (C 18 ). The 500ml of mobile phase (67:33:0.04) consisted of 335ml of acetonitrile and 165ml of distilled water and 200μl of acetic acid maintaining the pH 4.0.The flow rate of the mobile phase was 1.5ml/ min. propofol was monitored by a UV detector at a 270nm wavelength. The limit of detection of propofol (in human plasma) was found to be 0.0001μg/ml while limit of quantification was found to be 0.001μg/ml for a 20ul injection volume.

Propofol is an intravenous sedative hypnotic agent which is used for both induction as well as maintenance of general anesthesia. The pharmacokinetics of propofol has been evaluated extensively in the west in different patients groups after either bolus doses or continuous infusions and presently there are multiple models available based on that data. So far, the pharmacokinetics of propofol has not been studied in the Indian. In our experience, previous methods based on HPLC and UV detection was not proved to be fast one for research or clinical purposes. [1-3] The method we are decscribed here is fast and simple and detection limit is 0.0001 µg/ml.

All chemicals were used of HPLC grade. Acetonitrile (Rankem, India), DibutylPthalate and 65% Perchloric acid were obtained from Merck Company. We used Perkin Elmer model for this estimation [3]. A Gilson Model 302 solvent delivery pump equipped with autosampler model 231 was used. The UV visible LC 90 detector was used. The signal from the UV detector was recorded on a Hewlett-Packard 3396A integrator. The column was carried out by 250 × 4.6 mm column packed with 10-µm Spherisorb reversed phase octadecyl silane particles (C18) [4]. A model 220 Branson sonicator was used to degas the mobile phase and solvents.

After approval from the Institutional Ethics Committee and written informed consent, ASA grade 1 old Indian patient was included. All patients underwent surgeries (laparoscopic cholecystectomy, Hernioplasty, Hysterectomy, Septopolasty and parotidectomy) requiring general anesthesia for less than two hours and expected blood loss of less than 10% of total blood volume. Patients with hepatitis, HIV infection, hepatic, renal, hematological and cardiovascular diseases were excluded from the study. No pregnant patient and no patient with history of smoking or alcohol intake were included in the study. Patients were premedicated with Tab Diazepam 5mg night before as well as 2 hrs before induction. Before induction of anaesthesia two large bore intravenous lines were secured, one each in the antecubital vein and vein on dorsum of the contralateral hand. The antecubital vein was used for blood sampling. Blood was centrifuged at 2000 rpm at 10 minutes to separate the plasma. After that precipitating solution (1ml) was added to 1ml of plasma sample, with the help of vortex mixer, stirred it for 2 minutes. The plasma substance precipitated by acetonitrile and Perchloric acid were separated by centrifuged at 20,000 rpm for 10 minutes. The supernatant was separated and inserted into the autosampler of HPLC system [5], after running baseline for an hour of mobile phase. The concentration of Propofol in test samples were calculated by using the regression parameters obtained from the area of the calibration graph. 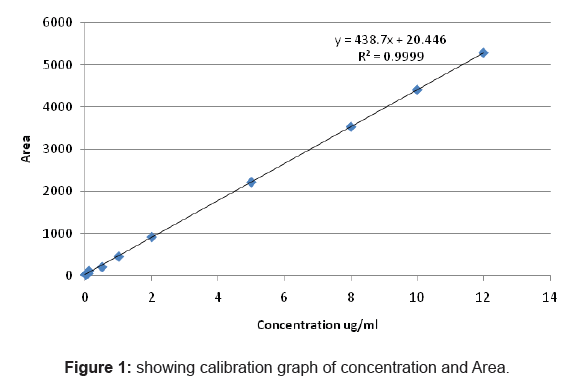 Linearity was validated by measuring area responses at the concentration range of 0.001µg/ml to 12µg/ml. Two separate stock solution were prepared, the same serial dilutions were made and each sample was injected in duplicate. A linear regression analysis was performed.

The calibration curve was found to be linear in the range 0.001µg/ ml to 12µg/ml

This method was applied to carry out a pharmacokinetic study of Propofol in 26 Indian patients using single bolus dose of 2 mg/kg BW. The sampling time was from 2 min to 24 hrs. Mean Propofol value was obtained at 2 min was 5.5 ± 0.8 and at 24 hrs it was 0 ± 0 µg/ml. Plasma levels were stables during other time intervals. The reversed phase HPLC method described here is simple, reproducible and can be used for routine clinical and reaserch purposes. This method can also be used to measure plasma levels every hour from the pharmacological induction of the patients during prolonged anesthesia, and therefore allows propofol infusion to be modified during surgical operations. By this method we can detect plasma concentrations in a very short time.