Copyright: © 2013 Menon D. This is an open-access article distributed under the terms of the Creative Commons Attribution License, which permits unrestricted use, distribution, and reproduction in any medium, provided the original author and source are credited.

For the fundamental study of photodynamic therapy, protein-damaging activity of the water-soluble phosphorus(V) porphyrin (DDP(V)TPP) was examined. Absorption spectrum measurement demonstrated the binding interaction between DDP(V)TPP and human serum albumin, a water-soluble protein. Photo-irradiated DDP(V)TPP damaged the amino acid residue of human serum albumin, resulting in the decrease of fluorescence intensity from the tryptophan residue of human serum albumin. Protein damage photosensitized by DDP(V)TPP was inhibited by the addition of sodium azide and enhanced in deuterium oxide, indicating the contribution of singlet oxygen. However, sodium azide could not completely inhibit the damage of human serum albumin, suggesting that the electron transfer mechanism contributes to protein damage as does singlet oxygen generation. Isolated tryptophan was also damaged by a photosensitization of DDP(V)TPP in solution, whereas DDP(V)TPP did not induce photodamage to tyrosine and phenylalanine. Using the application of a fluorometry of hydrogen peroxide, the deactivation of catalase photosensitized by DDP(V)TPP was demonstrated.

The purpose of this study is the examination of protein-damaging activity of photosensitizers for photodynamic therapy (PDT) by simple analysis method. PDT is a less invasive treatment of cancer and some non-malignant conditions [1-3]. In general, porphyrins are used as the photosensitizer for PDT. Administered photosensitizers damage cancer cells by the oxidation of biomacromolecules including protein and DNA through the following two mechanisms during visible-light irradiation [4-6]. One mechanism is the generation of singlet oxygen (1O2) through energy transfer to molecular oxygen from the photoexcited photosensitizer (Type II mechanism). Another mechanism is the electron abstraction from biomacromolecules to the photoexcited photosensitizer (Type I mechanism). The Type II mechanism is easily induced by visible-light excitation; however, the oxygen concentration in a cancer cell is relatively low [7], resulting in the restriction of activity of the PDT photosensitizer. To avoid this low oxygen concentration problem, the Type I photosensitizer may play a key role in the molecular design for PDT. The Type I mechanism requires highly oxidative activity (a lower reduction potential) in the photoexcited state of the photosensitizer. Ultraviolet photosensitizers mainly induce biomolecule photodamage through the electron transfer mechanism, whereas a visible-light photosensitizer is not appropriate for this mechanism. Therefore, it is important to select the appropriate molecular design to achieve electron transfer-mediated biomolecule damage using a visible-light photosensitizer. Since high-valent porphyrin complexes demonstrate a lower reduction potential in their photoexcited state than free-base or low-valent metal complexes, these porphyrins are advantageous for the oxidative electron transfer reaction [8-14]. Indeed, derivatives of high-valent porphyrin complexes, such as P(V) [10] and Sb(V) [14] complexes, photosensitize DNA damage through two mechanisms: 1O2 generation and the electron transfer reaction. In this study, photosensitized damage of protein and amino acid by a porphyrin P(V) complex, di(3,6-dioxadecyloxo) tetraphenylporphyrinato-phosphorus (V) chloride (DDP (V) TPP, Figure 1), [15] was investigated. As a target protein model, human serum albumin (HSA), a water-soluble protein, was used because its structure and property were well elucidated [16]. Further, the deactivation of catalase as enzyme model photosensitized by DDP (V) TPP was also examined.

Figure 1: Structure of DDP(V)TPP. The optimized structure (Top view and Side view) was obtained by a density functional treatment at the B3LYP/6– 31G* level.

The absorption spectrum of DDP (V) TPP and HSA was measured with the UV-Vis spectrophotometer UV-1650PC (Shimadzu, Kyoto, Japan). The fluorescence spectra of DDP (V) TPP and HSA were measured with an F-4500 fluorescence spectrophotometer (Hitachi, Tokyo, Japan). Fluorescence decay was measured using a timecorrelated single-photon counting method with a Fluorescence Lifetime System TemPro (HORIBA, Kyoto, Japan). Laser excitation at 390 nm was achieved by using a diode laser (NanoLED-390, HORIBA) in at a repetition rate of 1.0 MHz.

The sample solution containing 10 μM DDP (V) TPP and 100 μM amino acid (tryptophan, tyrosine, or phenylalanine) in a sodium phosphate buffer (pH 7.6) was irradiated with LED (λmax=519 nm, 1 mW cm-2) for 60 min. After photo-irradiation, the sample solution was analyzed with high-performance liquid chromatography (HPLC). The HPLC system consisted of an intelligent HPLC pump (PU2080 plus, JASCO Co., Tokyo, Japan) and a column oven (Shodex OVEN AO-30, SHOWA DENKO K.K., Tokyo, Japan) equipped with an ODS column (InertSustain C18, GL Science Inc., Tokyo, Japan). The mobile phase, containing 40 mM acetate including 73 mM sodium acetate and methanol (20/80, v/v), was prepared according to the literature [19]. The analysis was carried out at a column temperature of 25°C and a flow rate of 0.5 ml/min. The HPLC eluate was routed directly into a photodiode array UV-Visible detector (SPD-M20A, Shimadzu). The concentrations of tryptophan, tyrosine, and phenylalanine were determined from the absorbance at 280 nm, 275 nm, and 260 nm, respectively.

Evaluation of the activity of catalase photosensitized by DDP (V) TPP

The inhibitory effect on protein function by the photosensitized reaction of DDP (V) TPP was evaluated using the measurement of catalase activity. The catalytic activity of damaged catalase should be decreased. This activity was determined by the fluorometry of H2O2 using folic acid [20]. Although folic acid itself is less fluorescent, the folic acid decomposed by H2O2 strongly fluoresces. To detect H2O2, the sample solution containing 10 μM folic acid, 20 μM CuCl2, and 100 μM H2O2 with or without catalase is incubated for 30 min at 37°C to measure the fluorescence intensity of folic acid (Ex: 350 nm, Em: 450 nm). The sample solutions (1.0 mL) containing 1.0 unit of catalase with or without 10 μM DDP (V) TPP were irradiated with LED (λmax=519 nm, 1 mW cm-2) for 30 min. For the control experiment, the sample solution containing catalase and DDP (V) TPP without irradiation was also prepared. 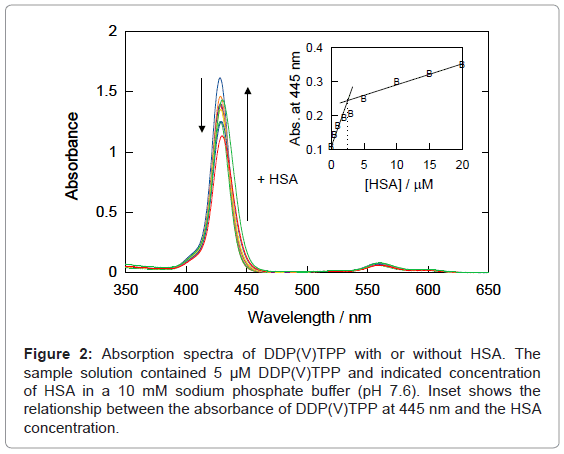 Figure 2: Absorption spectra of DDP(V)TPP with or without HSA. The sample solution contained 5 μM DDP(V)TPP and indicated concentration of HSA in a 10 mM sodium phosphate buffer (pH 7.6). Inset shows the relationship between the absorbance of DDP(V)TPP at 445 nm and the HSA concentration.

Figure 3 shows the fluorescence spectra of HSA in buffer solution. The intensity of HSA fluorescence around 350 nm, assigned to the tryptophan residue, was decreased by photo-irradiation in the presence of DDP (V) TPP. The fluorescence decrement of HSA can be explained by the amino acid oxidation through the photosensitized reaction [17,18]. The concentration of damaged HSA, [Damaged HSA], is determined as follows: 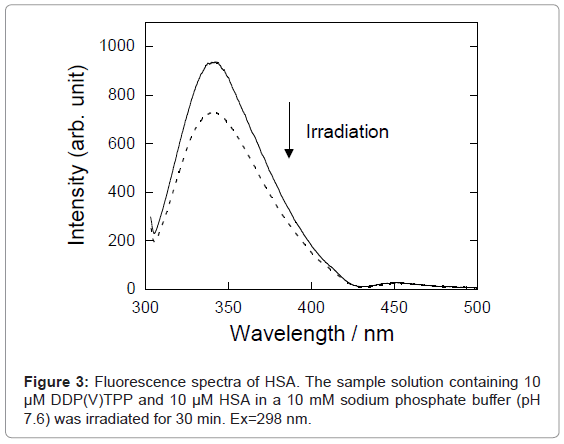 where F and F0 are the fluorescence intensities of HSA with or without the treatment of photosensitized reaction by DDP (V) TPP, respectively and [HSA]0 is the initial concentration of HSA (10 μM) (Figure 4). This HSA damage was partially inhibited by NaN3, a physical quencher of 1O2 (Figure 4). Furthermore, HSA damage was enhanced in D2O (Figure 5), in which the lifetime of 1O2 is markedly elongated (about 2 ~ 4 μs in H2O to 70 μs in D2O) [21]. These findings suggest HSA oxidation by1O2. It has been reported that the quantum yield of 1O2 generation (ΦΔ) by DDP (V) TPP is relatively large (ΦΔ=0.73) [15], indicating that the 1O2 mechanism is also important for photosensitized biomolecule damage in the presence of a sufficient concentration of molecular oxygen. 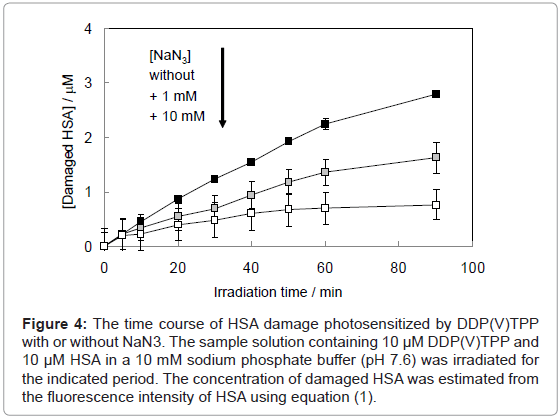 Figure 4: The time course of HSA damage photosensitized by DDP(V)TPP with or without NaN3. The sample solution containing 10 μM DDP(V)TPP and 10 μM HSA in a 10 mM sodium phosphate buffer (pH 7.6) was irradiated for the indicated period. The concentration of damaged HSA was estimated from the fluorescence intensity of HSA using equation (1). 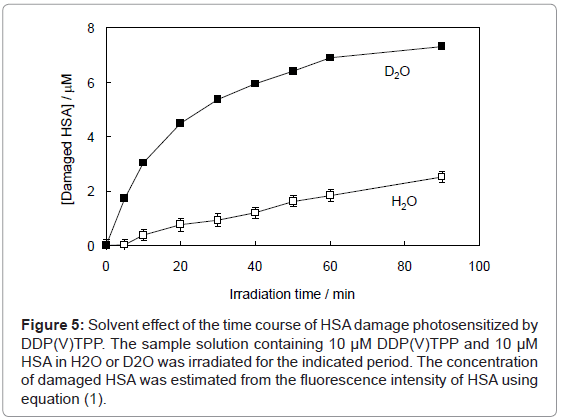 Figure 5: Solvent effect of the time course of HSA damage photosensitized by DDP(V)TPP. The sample solution containing 10 μM DDP(V)TPP and 10 μM HSA in H2O or D2O was irradiated for the indicated period. The concentration of damaged HSA was estimated from the fluorescence intensity of HSA using equation (1).

On the other hand, HSA damage was not completely inhibited by an excess amount of NaN3 (~10 mM) (Figure 4), suggesting that the electron transfer mechanism is partly responsible for HSA photodamage, as is the 1O2 mechanism. The quenching efficiency of 1O2 by NaN3 (Efq) can be calculated from the following equation using the lifetime of 1O2 (τΔ = 3.5 μs):

where [NaN3] is the concentration of NaN3 and kq is the quenching rate coefficient of 1O2 by NaN3. The kq is almost the same as the diffusion control limit (kdif), which is calculated as follows:

where R is the gas constant, T is the absolute temperature, and η is the viscosity of water (8.91x10-4 kg m-1 s-1). Thus, the Efq becomes 0.996 in the presence of 10 mM NaN3. This value suggests that almost all the 1O2 can be quenched by 10 mM NaN3. Consequently, the damage of HSA photosensitized by DDP (V) TPP in the presence of 10 mM NaN3 should be due to the electron transfer mechanism. The inhibited ratio of the HSA damage by NaN3 indicates the contribution of the 1O2 mechanism. The estimated contributions of HSA damage through the electron transfer and the 1O2 generation mechanisms for 60 min irradiation were 0.31 and 0.69, respectively.

The time-resolved fluorescence intensity of DDP (V) TPP could be fitted by a single exponential function in the case without HSA, and the estimated lifetime (τf ) was 4.67 ns. Similarly, the single exponential function was well fitted in the case with HSA, and the obtained value of τf (4.56 ns) was slightly shorter than that without HSA, suggesting the electron transfer quenching. The quenching rate constant of photoexcited DDP (V) TPP through electron transfer (ket) in the HSA microenvironment should be estimated from the following equation: 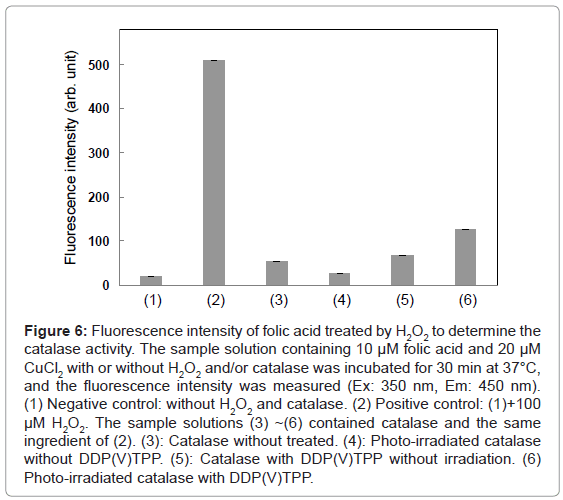 Figure 6: Fluorescence intensity of folic acid treated by H2O2 to determine the catalase activity. The sample solution containing 10 μM folic acid and 20 μM CuCl2 with or without H2O2 and/or catalase was incubated for 30 min at 37°C, and the fluorescence intensity was measured (Ex: 350 nm, Em: 450 nm). (1) Negative control: without H2O2 and catalase. (2) Positive control: (1)+100 μM H2O2. The sample solutions (3) ~(6) contained catalase and the same ingredient of (2). (3): Catalase without treated. (4): Photo-irradiated catalase without DDP(V)TPP. (5): Catalase with DDP(V)TPP without irradiation. (6) Photo-irradiated catalase with DDP(V)TPP.

The fluorescence enhancement without catalase (ΔI0) is proportional to the initial concentration of H2O2 ([H2O2]0) and the reaction time (t) as follows [20]:

In the presence of catalase, the concentration of H2O2 ([H2O2]) can be expressed as the following equation, which is based on the assumption that H2O2 is decomposed by catalase linearly with the t:

Therefore, the fluorescence enhancement with catalase (ΔI) is

The relative activity of catalase photosensitized by DDP (V) TPP can be obtained from equation (10) as follows: 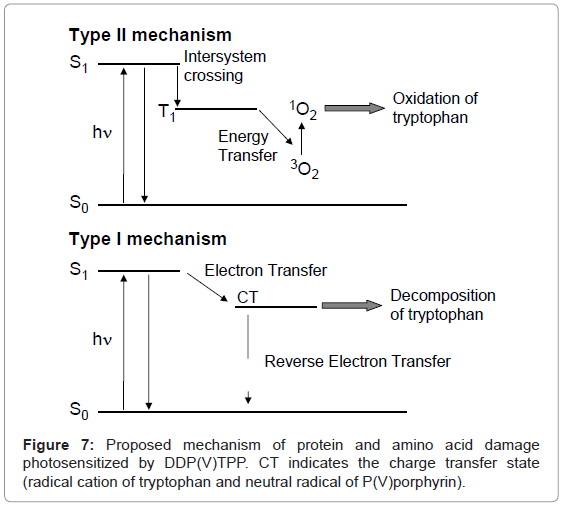 This work was partially supported by JSPS KAKENHI Grant Number 23750186.