Copyright: ©2011 Bari SB, et al. This is an open-access article distributed under the terms of the Creative Commons Attribution License, which permits unrestricted use, distribution, and reproduction in any medium, provided the original author and source are credited. 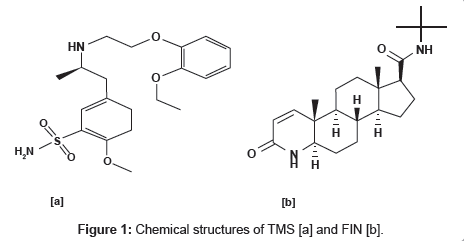 Literature survey reveals various chiral separation techniques [3-6] along with impurities [7] for tamsulosin. More over LC [8,9] coupled with MS-MS technique [10] is described for finasteride. Spectrophotometeric method [11] and simultaneous estimation for tamsulosin and dutasteride is also given [12-13].

The purpose of this work is to establish and validate a simple accurate and reproducible procedure for quantitative TLC analysis of tamsulosin hydrochloride and finasteride in bulk and tablet dosage form as per ICH guidelines [14,15].

The samples were spotted in the form of bands of width 6mm with a Camag 100 ¯l sample (Hamilton, Bonaduz., Switzerland) syringe on precoated silica gel aluminium plate 60 F254 (20 cm x 10 cm with 0.2 mm thickness), supplied by Anchrom technologists, (Mumbai) using a Camag Linomat applicator 5 (Switzerland). A constant application rate of 150 nl sec-1 was employed and space between two band was 15 mm. The slit dimension was kept 6 mm x 0.45 mm. The mobile phase consisted of toluene: n-propanol: triethylamine (3.0:1.5:0.2 v/v). The optimized chamber saturation time for mobile phase was 20 min at room temp (25°C ± 2) and relative humidity 60% ± 5. The length of chromatogram run was approximately 80 mm. Subsequent to the development; TLC plates were dried in current of air with the help of an air dryer. Densitometric scanning was performed using Camag TLC scanner 3 in the absorbance mode at 260 nm and software used was winCATS 4.0.5. The source of radiation utilized was deuterium lamp emitting a continuous UV spectrum in the range of 190 - 400 nm.

Accurately weighed 10 mg of TMS and 50 mg of FIN were transferred to 10 ml volumetric flask, dissolved in methanol and volume was adjusted to mark. This mix standard solution was used for validation study.

Specificity: Specificity of the method was ascertained by analyzing standard drug and sample. The mobile phase resolved both the drugs very efficiently, as shown in Figure 2. The spot for TMS and FIN was confirmed by comparing the RF and spectra of the spot with that of standard. A typical absorption overlain spectrum of TMS and FIN shown in Figure 3; wavelength 260 nm was selected for densitometric scanning. Peak purity of TMS and FIN was assessed by comparing the spectra of sample with that of standard at three different levels, i.e., peak start (S), peak apex (M) and peak end (E) positions. 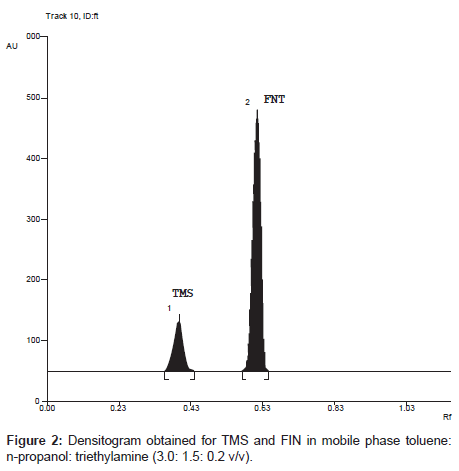 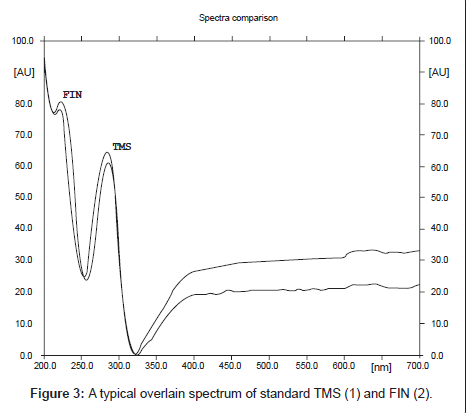 Figure 3: A typical overlain spectrum of standard TMS (1) and FIN (2).

Accuracy: The pre-analyzed samples were over spotted with extra 80, 100 and 120 % of the standard drug solution of TMS and FIN on TLC plate. The total concentrations of the drugs were determined. The experiment was conducted in triplicate. This was done to check for the recovery of the drug at different levels in formulation.

Robustness: Robustness of the method was performed by spotting 400 ng of TMS and 2000 ng of FIN on TLC plate by making small deliberate changes in chromatographic conditions. Mobile phases having different composition like toluene: n-propane: triethylamine (3.5: 1: 0.2 v/v/v) and toluene: n-propane: triethylamine (3.0: 1.5: 0.2 v/v/v) were tried and chromatograms were run. The development distance was varied from 7, 7.5 and 8 cm. The amount of mobile phase (4.7 and 9.4) was tried and chromatograms were run. Temperature and relative humidity was varied in the range of ± 5%. The plates were prewashed by methanol and activated at 60 ± 5oC for 2, 5 and 7 min prior to chromatography. Duration of saturation time of chamber was varied as 15, 20 and 25 min. Time from spotting to chromatography and time from chromatography to scanning was varied from 0, 20, 40 and 60 min. Robustness of the method was done at three different concentration levels.

Ruggedness: Ruggedness of the method was performed by spotting 400 ng of TMS and 2000 ng of FIN, respectively by two different analyst keeping same experimental and environmental conditions.

Twenty tablets were weighed; average weight determined and crushed in to fine powder. An accurately weighed tablet powder equivalent to 4 mg of tamsulosin hydrochloride and 50 mg of finasteride was transferred into 25 ml volumetric flask containing 15 ml methanol, an accurately weighed quantity of standard tamsulosin hydrochloride (6mg) was added to obtain the proportion of 1:5 for TMS and Fin respectively. The solution was sonicated for 10 min and volume was made up to mark with same solvent. The resulting solution was filtered using 0.41 µm filter (Millifilter, Milford, MA). The appropriate volume i.e. 5 µl containing 400 ng of TMS and 2000 ng of FIN was spotted on TLC plate.

The TLC procedure was optimized with a view to develop method for simultaneous determination of TMS and FIN. The mobile phase toluene: n-propanol: triethylamine 3.0: 1.5: 0.2 (v/v) gave good resolution, sharp and symmetrical peak with RF value of 0.35 for TMS and 0.60 for FIN. It was observed that prewashing of TLC plates with methanol (followed by drying and activation) and pre-saturation of TLC chamber with mobile phase for 20 min ensure good reproducibility and peak shape of both the drugs.

Precision: The precision of the developed HPTLC method was expressed in terms of % relative standard deviation (% R.S.D.). The results depicted revealed high precision of the method is presented in Table 1.

LOD and LOQ: Detection limit and quantification limit was calculated by the method as described in Specificity. The LOQ and LOD for TMS were 52.94 ng and 17.47 and for FIN, LOQ and LOD were found to be 187.39 ng and 61.98 ng. This indicates that adequate sensitivity of the method.

Accuracy: The proposed method when used for extraction and subsequent estimation of both the drug from pharmaceutical dosage forms after over spotting with 80, 100 and 120 % of additional drug; afforded recovery of 98 - 102 % as listed in Table 2.

* mean of three estimations at each level

The developed HPTLC method is simple, precise, accurate and reproducible and can be used for simultaneous determination of TMS and FIN in tablets. The method was validated as per ICH guidelines.