Copyright: © 2011 Pezzulo AA, et al. This is an open-access article distributed under the terms of the Creative Commons Attribution License, which permits unrestricted use, distribution, and reproduction in any medium, provided the original author and source are credited.

The surface of the airways that conduct gases into and out of the lungs has components that protect the host from inhaled and aspirated pathogens. The thin (4-7 mm height) layer of airway surface liquid (ASL) that lines the airways has physicochemical properties that are important for normal function of these antimicrobial components. Among these properties, low glucose concentration is required for normal antimicrobial activity. Current methods for assessing the ASL have important flaws (temporal resolution, dilution factors, collection volume), which have been a recurring obstacle for understanding diseases in which ASL composition is abnormal. To circumvent these problems, microelectrodes coated with ZnO nanorods and immobilized glucose oxidase was used to determine glucose concentration in ASL of well-differentiated cultures of human airway epithelia. The sensor responded to glucose linearly over a concentration range of 0.128 to 8 mM and the effects of electroactive interferents were minimal. The measured concentration of glucose in ASL was consistent with values previously reported. This method confirms the presence of a transepithelial glucose concentration gradient in human airway epithelia and is an important step towards characterizing the physicochemical properties of ASL and understanding diseases caused by changes in ASL composition.

The small volume of ASL makes study of its physicochemical properties difficult without altering them during measurements. This has been a recurring obstacle in research involving diseases such as cystic fibrosis, in which alterations in ASL composition are thought to be crucial elements of pathogenesis. Commonly used methods such as filter paper collection of ASL result in samples that contain a combination of ASL and submucosal fluid, confounding chemical analyses [3]. Indirect methods such as collection of exhaled breath condensate are useful in avoiding submucosal fluid sampling but have a relatively low temporal resolution and are very sensitive to calculations of dilution factors (which can reach 10,000) and to the contribution of alveolar tissue and the mouth to samples of condensate [4,5].

Direct measurement methods such as electrochemical analysis with substrate selective electrodes have been hampered in the past by very slow electrode response times, limited stability, and methods of electrode manufacturing that are complicated and time consuming. To circumvent these limitations, in this study, we have applied a recently developed sensor [6-9] consisting of glucose oxidase immobilized on ZnO nanorods [10] grown at the tip of borosilicate glass capillaries. The physical dimensions, biocompatibility, short response times, sensitivity, and ease of use of this electrode configuration [11] allowed us to directly determine the glucose concentration in the ASL of welldifferentiated cultures of human airway epithelia in situ and opens the possibility of characterizing the dynamic nature of glucose transport by airway epithelia in vivo.

The outer surface of borosilicate glass capillaries was uniformly coated with chromium and silver film as we have described earlier in [7-10]. The AgCl tip coating was prepared electrochemically by dipping the coated end of a capillary in 0.2M HCl solution and then by electrolyzing the silver film to form AgCl by polarizing it at 1.0 V for one minute. A 3 cm long Ag/AgCl layer was coated on the tip of the capillary to serve as a reference microelectrode. The outer end of the Ag/AgCl layer was connected with a copper wire (0.5 mm in diameter and 15 cm in length) and fixed by means of high-purity silverconductive paint

Growth and characterization of ZnO nanostructures

ZnO nanostructures were grown using the low-temperature growth technique (aqueous chemical growth technique) on Ag coated tips of borosilicate glass capillaries in an aqueous solution of zinc nitrate hexahydrate [Zn(NO3)2.6H2O, 99.9% purity] and hexamethylenetetramine (C6H12N4, 99.9% purity). The concentrations of both were fixed at 0.025M. All the aqueous solutions were prepared in distilled water and we restrict the results to glass tip substrate. The glass capillaries substrates were immersed into the aqueous solution and tilted against the wall of beaker. Next, the beaker was incubated at 93°C for two hours to generate aligned ZnO nanostructures, after which the substrate was removed from the solution and cleaned with de-ionized water. The grown ZnO nanorods on glass tip have been studied by field emission scanning electron microscope (FESEM) at different magnifications as shown in Figure 1. A calibration curve was generated by recording the electrochemical potential of the glucose-probe (6514, Keithley, Cleveland, OH) versus an Ag/AgCl reference microelectrode in a solution of glucose with concentrations ranging from 0.125 mM to 8 mM dissolved in glucosefree DMEM (11966, Invitrogen, Carlsbad, CA). A very fast response time was noted over the whole concentration range with 95% of the steady state voltage achieved within one second. Within 5 minutes after generating a standard curve, the microelectrode was used for determination of ASL glucose concentration.

Well-differentiated cultures of human airway epithelia cells were obtained from the In Vitro Models and Cell Culture Core of the University of Iowa at least 2 weeks after cells were seeded on clear microporous membranes using the methods described in Karp et al. [12] (Figure 3A). Under these conditions, the epithelial cells polarize and develop tight junctions that define the limits between a ciliated apical surface lined with ASL that constitutes the air-liquid interface and a basolateral surface that contacts the filter membrane. The cultures were incubated for at least 3 days at 37°C in a humidified 21% O2/ 5% CO2 incubator with 5mM glucose in glucose-free DMEM as the nutrient medium. The nutrient medium was replaced every 6 hours to maintain a constant basolateral glucose concentration. Figure 3: (A) Transmission electron microscopy image of human airway epithelia (HAE) in vitro. Epithelial cells rest on a filter membrane and develop tight junctions towards the apical surface. A layer of airway surface liquid (ASL) 4 to 7 mm high lines the surface of airway epithelia. (B) Diagram of the system used for measurement of ASL glucose. HAE in a temperature-controlled chamber (not shown) are visualized with the lens of an inverted transmitted light microscope. The reference and working microelectrodes are mobilized with micromanipulators (not shown) until contact with the ASL is established.

The morphology of high density and highly aligned ZnO nanorods was investigated by FESEM (Figure 1). ZnO nanorods grown on the glass tip substrate have a rod-like shape with hexagonal cross section and are primarily aligned along the c-axis. The typical diameters of the as-grown nanorods are in the range of 60 to 80 nm and length in the range of about 1 μm.

The response of the electrochemical potential difference of the ZnO nanorods to the changes in buffer electrolyte glucose was measured for a range of 0.125 mM to 8 mM and shows that this glucose dependence is linear and has sensitivity equal to 160.8 mV/decade (Figure 4). Since the Ag/AgCl reference microelectrode can be sensitive to Cland the concentration of Cl- in the ASL can be different to that in the calibration media, the selectivity of the sensor was tested with different concentrations of Cl- to determine its relative contribution to the measurements of glucose. There was no observable effect on the glucose response (data not shown). To assess the reversibility of the microelectrode potential, we washed the microelectrode with deionized water after making the calibration curve and repeated one of the standard glucose concentration measurements. In all cases, we obtained a value within 5% of expected. Repeated measurements of the same sample with an electrode generated values within 3% of expected. 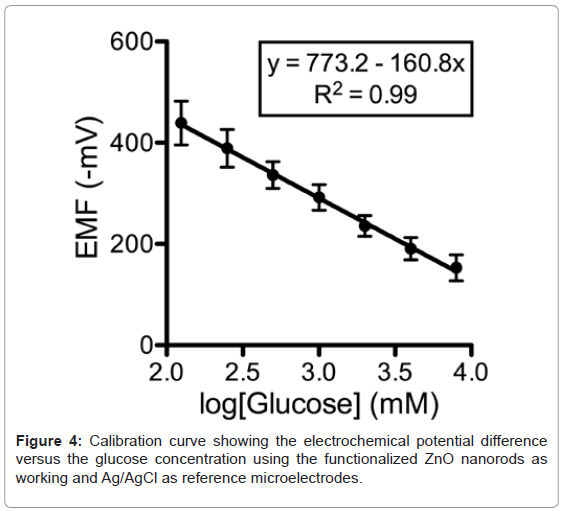 Functionalized hexagonal ZnO nanorod coated microelectrodes were used as a selective sensor for the glucose concentration in ASL. The functionalization was achieved through the use of the enzyme glucose oxidase and the potential difference was found to be linear over a wide concentration range (0.125 mM to 8 mM). Our results are consistent with values obtained previously using breath condensate analysis [13,14] and to our knowledge, are the first in situ electrochemical determination of glucose in the ASL. Moreover, our results confirm the presence of a transepithelial glucose concentration gradient [2] using methodology that can be adapted for use in vivo to obtain realtime measurements. The effect of electroactive interferents under the testing conditions can be negligible and showed adequate selectivity for glucose.

These results demonstrate the capability to perform biologically relevant measurements of glucose in ASL in situ. The ZnO nanorod microelectrode thus holds promise for minimally invasive dynamic analyses of ASL analytes and is an important step towards understanding pathogenesis of diseases that present with abnormal ASL composition