A Brief Review of Calypso: Past, Present and Future

Calypso is an internal electromagnetic motion monitoring technology to localize and track tumors in a real-time and direct way to allow accurate treatment. It has been nearly two decades since its invention and the first Calypsobased stereotactic liver radiotherapy in China was successfully implemented and evaluated in our institution. To thoroughly understand this technology, it is more beneficial to comprehensively investigate the development of Calypso all over the world besides China, which may facilitate the motion management-based radiotherapy methodologies and guide the way for its future applications. In this mini review, a brief description of thorough retrospect, current status analysis and prospect was illustrated. It is shown that Calypso is gradually spreading out from developed countries to developing countries, and it is used for more carcinoma types. It is hoped that this mini review can inspire more Calypso application cases and provide a firm faith in its bright future.

Calypso, according to Greek mythology, refers to a nymph who lived on the island of Ogygia. In this mini review, the Calypso (Varian Medical Systems, USA) is a motion management technology in radiation therapy which can perform internal electromagnetic motion monitoring. The special name derived from Greek mythology gives this technology a romantic feeling.

As shown in Figure 1, the Calypso system is composed of several parts, including beacon transponders, array, console, tracking station. Firstly, the array transmits electromagnetic signals to the beacon transponders. Secondly, the beacon transponders receive the waves and transmit Radio-Frequency (RF) signals at specific hertz. Lastly, the array detects the RF signal and converts their position displacements to movement curves. With the help of console and tracking station, therapists can observe the movement curves and recognize the real-time offsets of the tumor. Due to the advantages of Calypso, the first internal electromagnetic motion monitoring implementation for stereotactic liver radiotherapy in China was successfully implemented and evaluated in our institution [5]. Preliminary research results had been reported. A thorough literature search was conducted with the keyword “calypso & radiotherapy” via the Web of Science, and current status of Calypso in China was briefly described. Nevertheless, it is necessary to investigate comprehensively the development of Calypso all over the world, which may facilitate the motion management-based radiotherapy methodologies and guide the way for its future applications.

In this paper, a brief review of Calypso, including its past, present and future trend, was described. It is expected that this comprehensive retrospect, current status analysis and prospect can lead to an improvement in Calypso methodologies to different carcinoma characterization in different countries.

A statistic work was done in advance to reveal dependencies of number of papers, such as countries, years of publication and carcinoma types (Figure 2). Figure 2: Number of papers with regard to Calypso in different countries.

Figure 2 shows the number of papers with regard to Calypso in different countries. It is clearly seen that there are huge differences among countries, especially the USA. The United States ranked the first and way out in front, followed by Australia, Germany, Japan, Canada, England, Denmark and China.

It is assumed that availability of Calypso was related to not only economic development levels but also population bases. It is also expected that, with the economic growth, more Calypso cases will be reported especially in developing countries (Figure 3). Figure 3: Number of articles and milestones of Calypso over the years.

Figure 3 shows the number of articles and milestones of Calypso over the years since it is invented. Although there were some records from 1997 to 2003, Calypso was actually emerged around 2004 [6]. At that time, other names such as wireless localization systems and nonionizing target localization systems were also used in addition to Calypso [7-9]. From 2004 to 2006, some QA (Quality Assurance) research papers were published, which were prepared for the following clinical trials [10,11]. Multi-centric clinical studies started from 2007 [12-15]. From 2004 to 2008, all the reports were revolving around prostate cancer.

In general, the number of articles about Calypso reached to its plateau during the period from 2012 to 2019. Possibly due to the COVID-19 pandemic, number of articles related to Calypso started to decrease since 2020. It can be predicted that more reports of Calypso will be published after the pandemic, when the traveling prohibition was released and risks of beacon implantation was lowered. It can also be noticed that Calypso was implemented in prostate cancer in the beginning and spread out to other types of carcinoma gradually, such as pancreatic cancer, cervical cancer, lung cancer and liver cancer. Thus, it is necessary to investigate the number of articles related to different carcinomas in order to recognize the current application status of Calypso (Figure 4). 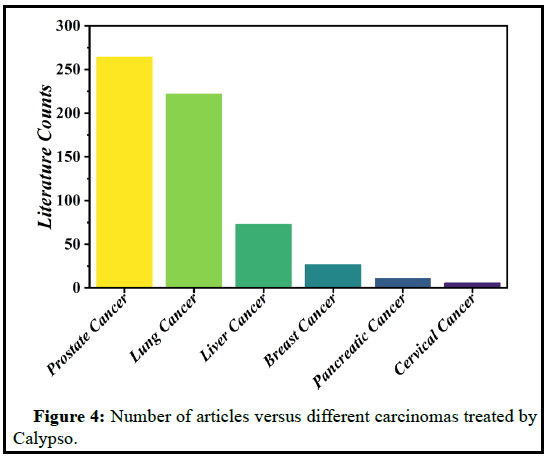 Figure 4: Number of articles versus different carcinomas treated by Calypso.

According to the aforementioned retrospect and current status analysis of Calypso, several anticipations can be made. Firstly, Calypso will gradually spread to developing countries, especially those with large populations, such as China and India. Secondly, Calypso will be applied in more types of carcinoma, which are badly in need of motion management such as breast cancer. Thirdly and most importantly, the widespread implementation of Calypso must be based on the premise of the deliberate selection of appropriate patients and the adequate skills of beacon transponder implantation.

Furthermore, in addition to regular radiotherapy procedures, implementation of Calypso includes several extra steps such as CTguided beacon implantation and setup QA. These complicated steps hinder the installation of Calypso in junior hospitals, for instance, infirmaries. It can be anticipated that Calypso will be only applied in major hospitals in the foreseeable future.

It has been nearly two decades since the invention of Calypso. In the last seventeen years, Calypso has been booming in developed countries, especially in the United States. What is more, most of the Calypso application cases are in prostate cancers and lung cancers. Nowadays, it begins to spread to developing countries and be utilized in soft tissues such as liver cancer. It is believed that more cases will be reported in aspect of both countries and carcinoma types. To some extent, due to cumbersome and error-prone steps, Calypso is still restricted to be applied in major hospitals. Whereas, it is still promising and its bright future is glad to be prospected.

The authors declare that the research was conducted in the absence of any commercial or financial relationships that could be construed as a potential conflict of interest.

The authors thank the therapist group of the Radiotherapy Department of Jiangsu Cancer Hospital for their opinions and experiences in Calypso applications. The authors also thank Miss Vicky Chen for her careful proofreading.

Copyright: © 2021 Mu Z, et al. This is an open-access article distributed under the terms of the Creative Commons Attribution License, which permits unrestricted use, distribution, and reproduction in any medium, provided the original author and source are credited.