Rheumatoid Arthritis (RA) is a relatively common condition, with a prevalence of approximately 1% [1] Conventionally, the serology test routinely used in RA is the determination of serum Rheumatoid Factor (RF) which has high and acceptable sensitivity, but modest specificity, particularly in the early course of the disease [2]. The more recent auto antibodies for the diagnosis of RA are anti-cyclic citrullinated peptide antibodies (anti-CCP antibodies). Anti-CCP testing is particularly useful in the diagnosis of RA and it is able to predict the severity of the disease and the irreversible damage [3]. Anti-CCPs have recently been added as one of the criteria in the 2010 American College of Rheumatology (ACR) /European League Against Rheumatism (EULAR) classification of RA [4]. Some studies have shown that anti- CCP antibodies are moderately sensitive but highly specific for the diagnosis of RA, and their specificity is higher than RF [5]. It is claimed that the presence of anti-CCP antibody in a patient could be the sign of RA with a rate of 90-95% [6].

Through a meta analysis of 78 studies, Nishimura et al. [7]. Revealed the pooled sensitivity and specificity of 67 and 95% for anti-CCP and 69 and 85% for RF and they reported that anti-CCP was more specific than RF for diagnosing RA [7]. It seems that ethnic differences in addition to differences in study design may contribute to the discrepancies in the literature on the utility of RF and anti-CCP for diagnosis of RA. Even in a country such as Iran, there is variation in results related to sensitivity, specificity, Positive Predictive Value (PPV) and Negative Predictive Value (NPV) of these two tests. For example, Moghimi et al. [8] showed that the overall performance of the anti-CCP and RF tests for differentiating RA and other inflammatory polyarthritis were similar [8]. Meanwhile in another research Aflaky et al. [9] revealed that AUC (Area under the Curve) for anti-CCP was higher than that for RF and concluded that anti-CCP might be of a better diagnostic value than RF test [9]. On the other hand, Abolghasemi et al. [10] offers a combination of these tests rather than anti-CCP or RF to get the best results in RA diagnosis and prognosis [10].

The study was approved by the university ethics committee, all the participants were informed about the research, and informed consents were obtained. In this cross-sectional study we studied 400 serum samples: 266 from definite RA patients according to the American College of Rheumatology (ACR) criteria [4], (228 women and 38 men; mean age 45.5 ± 13.8 years; range, 8-74 years) and consecutively recruited from the rheumatology out-patient clinic of Shahid Sadoughi Hospital of Yazd, Iran. 198 (61%) of these patients were classified as having early RA because their symptoms’ onset, had appeared <1 year before this study and radiological examinations revealed no lytic lesions in the wrists, hands, and feet. To provide data on assay specificity, 134 controls (matched for age and sex including 22 males and 112 females with non-RA rheumatic diseases) selected on the basis of their clinical diagnosis, were also studied.

Anti-CCP antibodies were tested by first-generation ELISA (AESKULISA). The anti-CCP was considered positive at values greater than18 U/ml. The RF was measured by turbidimetry on a latexenhanced agglutination assay (Roche Integra, Penzberg, Germany). The RF was considered positive at values greater than 10 U/ml. Each of these tests was performed and evaluated by operators who were blinded to other serological results and unaware of the patients’ clinical data. The sensitivity and specificity for each assay was determined. Our study was not designed to investigate the relationship between clinical symptoms and laboratory results. The statistical analysis was performed using SPSS, version 16 (SPSS Inc., Chicago, IL, USA). Frequency table was used to assess sensitivity, specificity, negative and positive predictive values. 95% confidence interval was calculated using the Wilson method.

The demographic data are summarized in Tables 1 and 2.

Table 1: Demographic information according to gender.

Table 2: Demographic information according to age.

Table 3: Relative distribution of anti-CCP results in studied patients according to RA diagnosis.

Table 4: Relative distribution of RF results in studied patients according to RA diagnosis. 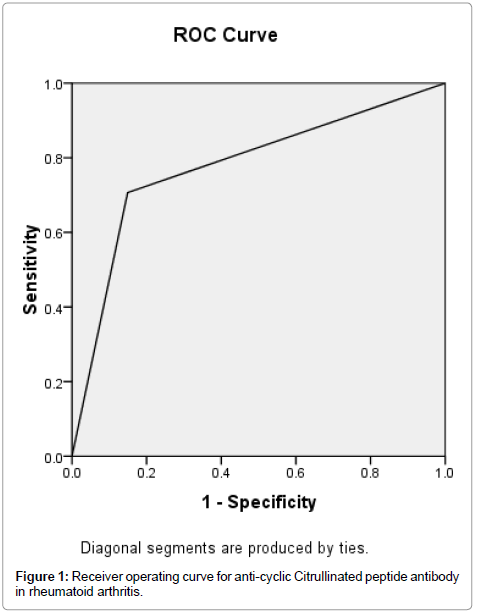 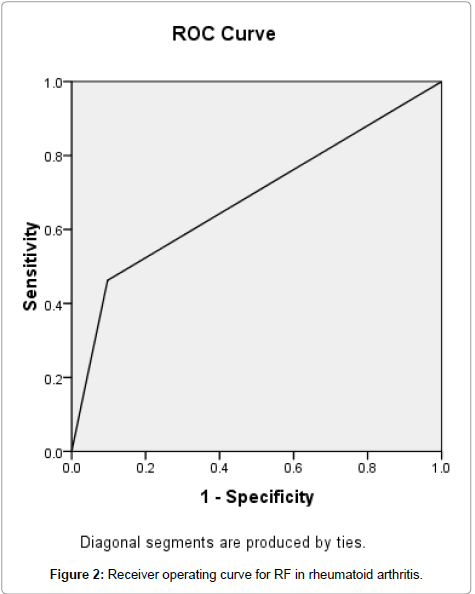 This study showed that anti-CCP antibodies indeed are good serological markers for RA. Anti-CCP antibodies are well suited as a front line diagnostic test for RA and especially early RA. In RF seronegative patients, anti-CCP can be helpful in confirming the diagnosis of RA. Step up of anti-CCP testing in the ACR’s updated 2010 RA classification criteria reveals the clinical value of these tests for the diagnosis of RA patients. However, this does not mean that anti- CCP can replace RF in diagnostic and prognostic testing for RA. We offer a combination of anti-CCP and RF tests rather than anti-CCP or RF to get the best results in RA diagnosis. Considering the ethnic difference, continuous assessment of the diagnostic value of auto antibodies in RA in different ethnic groups is useful and helps revealing the heterogeneous nature of the disease.

Copyright: © 2014 Binesh F, et al. This is an open-access article distributed under the terms of the Creative Commons Attribution License, which permits unrestricted use, distribution, and reproduction in any medium, provided the original author and source are credited.