A Comparison Between Two Assays for the Redox Status in Plasma

1Centre for Health Protection, National Institute for Public Health and the Environment, Bilthoven, The Netherlands

Copyright: © 2017 Jansen E, et al. This is an open-access article distributed under the terms of the Creative Commons Attribution License, which permits unrestricted use, distribution, and reproduction in any medium, provided the original author and source are credited.

In the present study, two commercial assays for the redox status are compared and evaluated, the SH groups in proteins (SHp) and the total thiol levels (TTL). Both assays are colorimetric endpoint reactions and have been adapted for use on an automatic clinical analyzer. Both assays performed well by giving comparable results in plasma samples. A good correlation with a correlation coefficient (R2) of 0.889 was found between the two assays. However, for some pathological specimens, especially highly lipemic samples, the SHp assay performed better than the TTL assay. When plasma samples with a high lipemic index were omitted, the correlation between the two assays was even better with an R2 of 0.942.

In conclusion, both assays for the redox status performed well, but the SHp assay can also be used in high lipemic samples.

The redox status is an important tool in determining the physiological state of the body, especially for the elderly [1-4]. A reflection of the redox status in the circulation can be measured by the level of free thiol groups in proteins in serum or plasma samples. There are several assays described in the literature for the evaluation of the redox status in serum or plasma. In these simple assays, a reaction of thiol groups of proteins takes place with a chromogen. The most used assay is based on the reaction of 5,5′-dithiobis-(2-nitrobenzoic acid) (DTNB), with thiol groups which can be easily performed with homemade materials [5,6]. However, for quality control during large-scale studies, commercially available assays are preferred due to the longterm delivery and stability of the assay components and the availability of quality control materials. This test can be performed either by high performance liquid chromatographic methods [7-9] or in micro plate format [10] and was also programmed and applied to clinical analyzers [11-14]. The use of auto-analyzers allows measurement of large sets of samples in epidemiological studies under the required quality during longer periods. Another advantage is the possibility to combine the assay with the measurement of other biomarkers in the same small volume of sample [15].

In the present paper, we have compared the performance of two commonly used assay systems from two commercial companies which are based on the DTNB reaction. The performance was tested in a number of human plasma samples from a clinical study on hypertension.

Blood was collected of sixty hypertensive patients which were included in the BEST-IN-TENSION Registry (Benefit for diaSTolic heart failure from Intensified management of refractory hyperTENSION), located at the Comprehensive Heart Failure Center in Würzburg. A number of 54 controls were included from the MyStIC (Myocardial Sodium content In Cardiac disease) study. Informed consent was obtained from all participants.

Both of these assays for the redox status gave similar results with respect to the reproducibility. The intra-assay coefficients of variation were almost similar for both assays. The average CV was 2.9% for the SHp assay and 2.7% for the TTL test. When all samples were included, the correlation between the two assays was rather good. In Figure 1, the correlation for all samples is shown. The correlation coefficient (R2) is 0.889 with the equation of the correlation curve of 'y=0.86x-49'. This means that the SHp assay exhibited slightly higher average concentrations (14% higher) than the TTL assay, probably due to the calibration of both commercial assays. 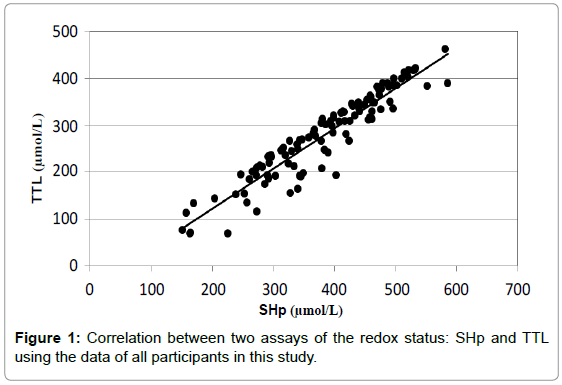 Figure 1: Correlation between two assays of the redox status: SHp and TTL using the data of all participants in this study.

Both of these assays for the redox status were adapted for use in a clinical auto-analyzer to be able to conduct large series of measurements of serum or plasma samples in epidemiological studies [8]. The autoanalyzer also measured three different indices for the assessment of the quality of the plasma samples, the hemolytic, icteric and lipemic index. Each index has an arbitrary range from 0 (low disturbance) to 10 (high disturbance). Each biomarker has for each of the three indices a certain cut-off value, above which the result of the measurement of the biomarker is no longer reliable. It appeared that both redox assays were not very sentitive to the hemolytic and icteric index, but rather sensitive for the lipemic index. The higher the lipemic index, the lower the measurements of the redox status. This is shown in Figures 2 and 3. 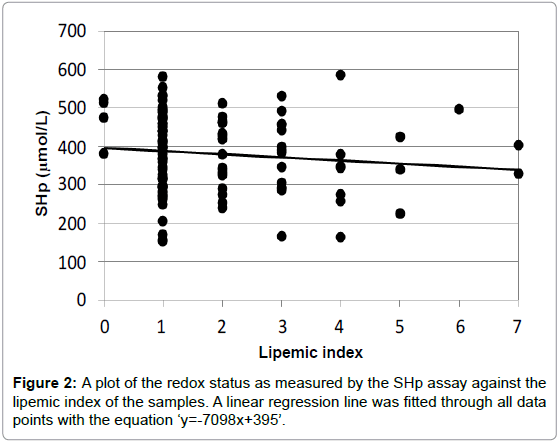 Figure 2: A plot of the redox status as measured by the SHp assay against the lipemic index of the samples. A linear regression line was fitted through all data points with the equation ‘y=-7098x+395’. 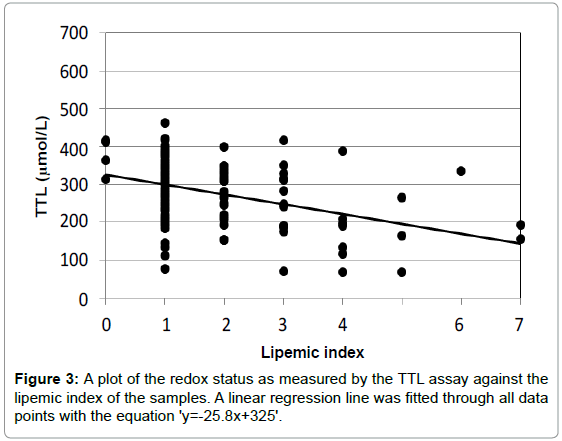 Figure 3: A plot of the redox status as measured by the TTL assay against the lipemic index of the samples. A linear regression line was fitted through all data points with the equation 'y=-25.8x+325'.

In Figure 2, the lipemic indices were plotted against the measurements with the SHp assay of all plasma samples. It turned out that there was a slight reduction of SHp levels with increasing lipemic index values with a slope of -7.98. The p-value of the regression line was 0.244 (non-significant).

For the TTL assay, a much larger deviation was observed at higher values of the lipemic index as shown in Figure 3. Here the slope is -25.8 which means a substantial reduction of the TTL values with increasing lipemic index. Here the p-value of the regression line was 1.7*E-5

If the plasma samples with lipemic index greater than 3 were left out of the analysis, a much better correlation with a correlation coefficient (R2) of 0.942 is found between the two assays with an equation of the correlation curve of 'y=0.84x-32.8' as is shown in Figure 4. 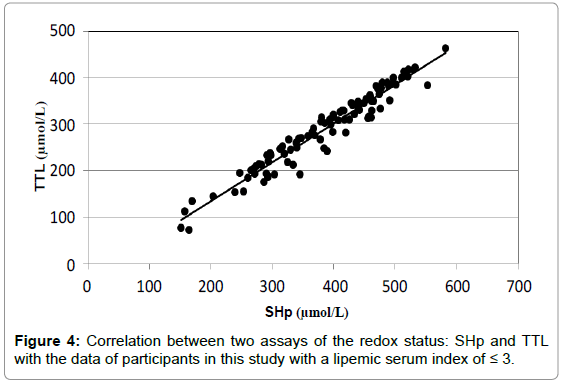 Figure 4: Correlation between two assays of the redox status: SHp and TTL with the data of participants in this study with a lipemic serum index of ≤ 3.

The redox status in elderly is an important biomarker for the assessment of the general state of health [16-18]. With increasing age the redox status decreases, which making the elderly more prone for oxidative stress related processes [19]. The redox status was measured using a simple colorimetric assay based on a reaction of the free SHgroups of the cysteine side chains in proteins with DTNB. The assay performance is suitable for automated clinical analyzers. The assay determines all thiols, but in serum or plasma the protein thiols are the main components [20]. The assay showed a good storage stability of the human serum and plasma samples at -80°C for longer periods [21]. In addition, the short-term stability is also very good which makes it easier in day-to-day handling of samples [22].

In the present report, two commercial assays have been compared with respect to linearity and sensitivity to pathological samples. Both assays are not very sensitive to hemolytic and icteric samples. But with regard to lipemic samples, often as result of a high concentration of triglycerides, both assays behave differently. It was found that the SHp assay is less sensitive to the influence of lipemic samples compared to the TTL assay. A linear regression line plotted through data points against the lipemic index, revealed a much larger decline in the TTL assay than in the SHp assay. The regression line of the TTL assay vs. the lipemic index for values from 1 to 7, showed a decay in the measurements of the TTL assay of 53% (statistically significant), whereas in the SHp assay this decrease is only 12% (statistically not significant), as shown in Figures 2 and 3.

It is concluded that both assays for the redox status are performing very well and that they can be applied in large-scale studies. The only difference is the better performance of the SHp assay with high lipemic plasma samples.