Such a novel, unprecedented method of remote monofilament neuropathy testing empowers telemedicine providers and patients to obtain diagnoses without a physical visit, while also creating opportunities for stakeholders to economize in workers’ compensation claims, personal injuries, and other administratively benefited injuries involving impairment rating guidelines such as the AMA Guides to the Evaluation of Permanent Impairment.

This study examines the viability of using “angel hair” pasta noodles, a material readily available to patients, as a telemedical alternative to monofilaments currently used in neuropathy testing in brick and mortar clinic.

Methods: Angel hair noodles were tested to determine the ideal conditions for breaking a noodle when 10 grams of pressure is applied. The bending point of monofilaments was tested for comparison.

Discussion: While the clinical monofilaments tested have a bending point closer to 10 g than the noodles, the noodles are within the acceptable error range of 10% reproducibility accepted by the AMA Guides to the Evaluation of Permanent Impairment. Testing with noodles has a comparable degree of accuracy to testing with monofilaments. Noodles may serve as a reliable alternative to monofilaments for telemedical neuropathy testing.

Neuropathy refers to any condition that affects the normal activity of the nerves in the peripheral nervous system. It is estimated that about 25%-30% of Americans will be affected by neuropathy and that neuropathy occurs in 60%-70% of people with diabetes [1]. Neuropathy testing is relevant to traumatic injuries occurring on the job or at home since physical trauma is the most common cause of injury to the nerves. This includes car accidents, falls, or fractures, but inactivity can also cause neuropathy [2].

There are a variety of neuropathy testing methods in use today [3]. Improved methods of neuropathy testing (testing that is easier, less costly, and can be conducted remotely) may create opportunities for patients and payers to economize in cases that require impairment ratings determined in accordance with the AMA Guides to the Evaluation of Permanent Impairment Rating (hereafter referred to as “AMA Guides”). This may include cases in the United States related to workers’ compensation, social security, and personal injury lawsuits, or any other case requiring an impairment rating, and, ultimately, a permanent disability rating to determine a patient’s benefits [4].

A reliable method for patients to perform their own monofilament testing could replace in-clinic visits with telemedicine visits, empowering patients and their telemedicine providers to obtain diagnoses without a physical visit. General benefits that have been associated with telemedicine-such as cost savings, faster convalescence [11] and potentially increased efficiency in the diagnostic processes [12] can be conferred upon patients who require neuropathy testing. Telemedical neuropathy testing may simplify the diagnoses of patients who live in rural areas, are homebound, or who would otherwise be inconvenienced by an in-clinic visits. Demonstration of a standardized technique could also improve practice and communication between patients and telemedicine providers.

This experiment explored a novel telemedical approach for testing neuropathy where patients self-test their own nerve loss using an inexpensive, easily accessible material rather than a standard clinical monofilament: Barilla “angel hair” pasta. Barilla did not sponsor this research or this article. The Barilla brand was selected due to statistics stating it is the top-selling brand of pasta in the United States [13], making it widely available and reasonably priced for telemedicine patients.

Our goal was to determine a method of breaking the thin, brittle angel hair pasta in such a way that it would match the same 10 gram equivalent force to that measured in clinical settings when bending a standard clinical monofilament. The 10 g equivalent force is the threshold for determining loss of self-protective nerve sensory ability and the standard for neuropathy testing [14,15]. Our target goal of variability was ± 10% from this threshold value, which is considered acceptable by AMA Guides. The breaking point of a pasta noodle would be comparable to the bending point of a monofilament used by providers in a clinic setting.

The materials used in this lab analysis included two different types of Ohaus scales: a Scout Pro SPE601 and AX622/E. No differences were found in the results for one scale compared to the other. Other materials included regular Barilla angel hair pasta, Mr. SIGA Heavy Duty Scrub sponges, a ruler, an X-Acto knife, and 10 g monofilaments. The monofilaments (UPC: 794438512661, Item model number: 08151705) were purchased from JAMAR and tested as shown in Figure 1 (left). 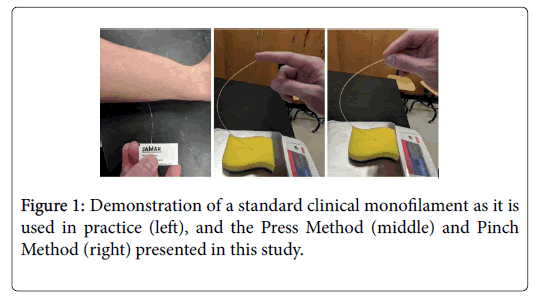 Figure 1: Demonstration of a standard clinical monofilament as it is used in practice (left), and the Press Method (middle) and Pinch Method (right) presented in this study.

Our initial approach to taking the measurement used what we refer to as the “Press Method,” shown in Figure 1 (middle). This involves placing a sponge on the scale then taring the scale. The sponge simulates a skin-like semi-compressible contact surface for the noodle. The sponge also serves as a stabilizing surface to prevent slippage on the metal scale. The noodle is then set vertically on the scale with the tip of the index finger placed on top of the noodle. The top of the noodle is aligned with the bottom by observing the noodle from above, ensuring that it is perpendicular to the scale surface. Finally, a downward force is applied to the noodle at a slow rate, giving the scale time to respond. This force is increased until the noodle breaks, which corresponds to the buckling of a monofilament.

For our first experiment, an X-Acto knife was used to cut three noodles at 26 centimeters (cm). The three noodles were then broken on the scale with the Press Method. Various other lengths were measured to see which gave a reading closest to 10 g. Once the 10 g mark was found to correspond to 23 cm length noodles, we continued to decrease the length to 10 cm in steps of 1 cm, testing 5 noodles at each length. The average breaking point and standard deviations for each noodle length were calculated and graphed in Figure 2. Based on these results, 23 cm Barilla angel hair pasta noodles were used for all subsequent experiments. 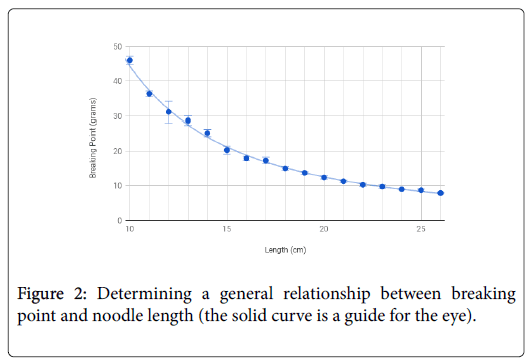 Figure 2: Determining a general relationship between breaking point and noodle length (the solid curve is a guide for the eye).

Next, we used the Pinch Method and varied which researcher was breaking the noodle, to determine variance between experienced individuals using this method. 102 noodles were cut, 34 for each of the three members of the research group. The average breaking points for the individuals were calculated and found to be 9.93 g, 10.40 g, and 10.31 g with standard deviations of 0.42 g, 0.54 g, and 0.56 g respectively. The combined average and standard deviation from all three of the researchers was 10.21 g and 0.54 g, respectively, which was within the accepted error range of ± 10%.

We interpreted the consistency of these results by concluding that no discernible difference was found in comparing results obtained by different researchers. Additional tests of more materials suggest that protocols could be developed that would allow patients to adapt these procedures depending on the availability of pasta.

Volunteers were solicited from the general student body of Hamline University to test the procedural variation within a randomized group of procedure testers. To determine the best way to instruct people to perform the experiment, three different approaches were taken. A volunteer was asked to perform (1) the Pinch Method with only verbal instructions, (2) the Pinch Method with both verbal and visual instructions, and (3) the Press Method. The average breaking points for each test were calculated and found to be 13.70 g, 12.48 g, and 11.00 g with standard deviations of 2.17 g, 2.55 g, and 0.79 g, respectively. Based on these results, we determined to use the Press Method for all subsequent experiments.

The top of each noodle was held at various angles (various horizontal distances away from being directly over the bottom) and then pressed down. This experiment was performed for horizontal displacements (between the top and bottom of the noodle) ranging from 1 cm to 5 cm in 1 cm increments, with 15 tests performed for each displacement. The average breaking point and standard deviation for each displacement was calculated and graphed in Figure 3. 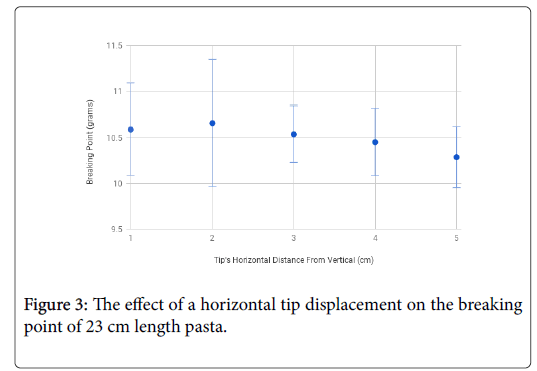 Figure 3: The effect of a horizontal tip displacement on the breaking point of 23 cm length pasta.

For the next test, a randomized group of procedure testers was again solicited in order to best simulate our intended application of this procedure. Twenty volunteers were identified, each of whom broke 50 noodles using the Press Method. The average breaking point and standard deviation for all volunteers was found to be 10.39 g and 0.78 g, respectively.

As a final test, we compared how our results from the 20 volunteers compared to standard clinical monofilaments used today by testing the bending point of JAMAR brand monofilaments. The monofilament is supposed to bend when the 10 g equivalent force is reached. The averages and standard deviations of the monofilaments were calculated and graphed in Figure 4. 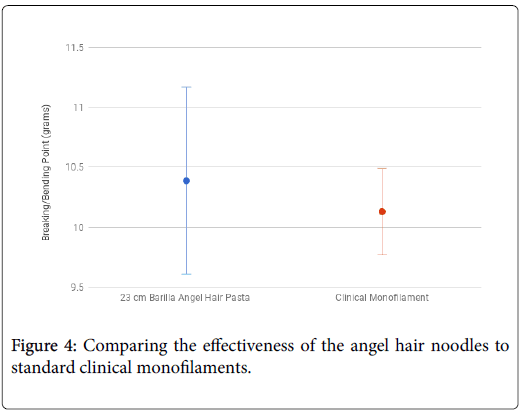 Figure 4: Comparing the effectiveness of the angel hair noodles to standard clinical monofilaments.

From the data shown in Figure 2, we observed the expected decrease in breaking point (gram equivalent force reading) with increasing noodle length. To facilitate ease of cutting for people who might use this procedure at home, we chose integer values. The average and standard deviation of 9.80 g and 0.59 g, respectively, for 23 cm length noodles demonstrated that this length worked consistently within our expectations based on our desired breaking point of 10 g and error range of ± 10%.

Observing the results from Figure 3, where the top of the noodle was displaced horizontally from being directly above the bottom, one can see that the average decreases from 10.59 g at 1 cm to 10.29 g at 5 cm. This slight decrease does not affect our results since they are all within our desired range with standard deviations of 0.50 g and 0.33 g, respectively. This test was performed because we were concerned about the Press Method being more difficult to apply perpendicularly on hard-to-reach areas of someone’s body. These results show that being slightly off from perpendicular does not hinder the method in a significant way.

From the results obtained when 20 volunteers were tested using the Press Method, we saw that the average was slightly above our numbness-threshold breaking point of 10 g and the data obtained was within our acceptable error range (within ± 10% of 10 g). With an overall average of 10.39 g and standard deviation of 0.78 g, we moved on to testing this 23-inch Barilla angel hair pasta against standard clinical monofilaments that are currently used in neuropathy testing procedures.

These data show that Barilla angel hair pasta cut to 23 cm and broken with the Press Method is a viable option for neuropathy testing today. While the clinical monofilaments tested have a bending point closer to 10 g than the noodles, the noodles are within the acceptable error range of 10% reproducibility accepted by AMA Guides. This pasta is a cost-effective alternative to the monofilament tested.

Based on these results, neuropathy testing performed by patients using the Press Method with Barilla angel hair pasta can serve as a reasonably accurate substitute for the monofilament procedure that is currently performed by doctors in a traditional clinic setting. While further testing of different types of pasta under different environmental conditions is necessary, using this method under similar conditions can provide telemedicine patients with the ability to test them for nerve loss using an inexpensive, easily accessible material.

Copyright: © 2019 Alchemy J, et al. This is an open-access article distributed under the terms of the Creative Commons Attribution License, which permits unrestricted use, distribution, and reproduction in any medium, provided the original author and source are credited.