Background and aims: Gastrointestinal Stromal Tumours (GIST) are mesenchymal soft tissue neoplasms which express the c-kit receptor and are exquisitely sensitivity to tyrosine kinase receptor inhibitors such as imatinib. This has significantly improved prognosis so it is important to identify retrospective cases. Methods: Patients between 1995-1999 with suspected GIST were identified via Scottish pathology departments. C-kit + and C-kit -/CD34 + tumours were included. Data were analysed according to NIH consensus and the newer AFIP criteria. Results: The incidence of GIST was 0.69/100000/year. 44.8% were originally diagnosed as GISTs. Using NIH Consensus criteria there was a statistically significant relationship between overall survival and necrosis (p=0.004), prognostic group (p<0.0001) and mitotic rate (p=<0.0001). Overall survival was correlated with AIFP criteria (p value <0.0001). Conclusion: This pan Scotland study validates the AFIP criteria for assessment of overall survival in GISTs. In addition using the established NIH consensus criteria confirms a similar incidence to other European countries. We have identified patients who are eligible for targeted therapies who would otherwise have been missed.

Gastrointestinal Stromal Tumours (GIST) are rare and recently re-classified mesenchymal neoplasms [1], representing 5% of sarcomas [2]. Not all are malignant but are regarded as having the potential to become so. The vast majority express the c-kit receptor (CD117) [3], a critical mutation vital to the development of GISTs [4], leading to its constitutive activation [1]. However it has only been since 2000 that the detection of c-kit by immunohistochemistry (IHC) has been gold standard in diagnosis. Standard chemotherapies [2] are generally ineffective; however, the exquisite sensitivity of these tumours to the novel tyrosine kinase receptor inhibitors imatinib [2,5] and sunitinib [6] has significantly changed management and prognosis. It is therefore imperative to establish a correct diagnosis of GIST, including retrospectively. Our study performed three important functions -to obtain information on incidence, to identify previously missed patients who could benefit from these targeted therapies, and to validate the NIH consensus and AFIP prognostic groupings.

Modern IHC techniques result in the reclassification of a large proportion of miscellaneous tumours to GIST’s [7] previously classified as leiomyomas, leiomyoblastomas, epitheloid leiomyosarcomas, leiomyosarcomas or sarcoma not otherwise specified. Combined with a low incidence this means there is uncertainty about the incidence within Scotland.

The most commonly used prognostic criteria is the NIH criteria [1]. However, there are limitations to the criteria specifically in the heterogeneity of tumours in the high risk category [12] and overlap in overall survival between low and intermediate risk groups [13,14]. In view of this, emphasis has recently changed to an alternative prognostic system devised by the Armed Forces Institute of Pathology (AFIP) [15]. This relates to the risk of disease progression in terms of the primary or metastatic disease. Unlike the NIH criteria this is more scientifically robust as it is based on a series of over 1900 GISTs and has been accepted as the principle prognostic system by the European Society of Medical Oncologists (ESMO) and the National Comprehensive Cancer Network. Its main difference is that it includes the addition of tumour site as a prognostic factor which has been further validated by subsequent studies [16,17]. Our study aims to validate overall survival using the AFIP criteria.

This retrospective study was based on archived pathological records and material from patients with actual or suspected primary diagnosis of GIST identified from pathological records of Scottish hospital pathology departments between January 1st 1995 and 31st December 1999. The study was divided into two stages; (1) identification and confirmation of actual GIST cases and (2) collection of patient information after informed consent was obtained. Any patients with a potential or actual diagnosis of GIST were included. Exclusion criteria were any patient with a sarcoma metastatic to the gastrointestinal tract, any patient who was referred to a Scottish pathology department for diagnosis but was resident outside Scotland and any patient with a recurrence of a GIST whose primary diagnosis was made outside the study period. Printed pathology reports were reviewed by the coordinating pathologist. Representative haematoxylin and eosin (H&E) stained sections and paraffin embedded tissue blocks were obtained. All pathological material was held within the central pathological laboratory for the study duration. No patients refused consent although two patients were deemed inappropriate by their GP, because of serious intercurrent illness.

For cases felt to be consistent with or suspicious of GIST, a single representative tumour tissue block was selected for confirmatory c-kit immunohistochemistry (IHC). Further pathological features of the tumour including site, size, histopathological type, mitotic rate and presence of metastases at diagnosis were noted. IHC was performed using 5 µm sections cut from archived formalin-fixed paraffin-embedded tissue blocks. All cases with tissue available were analysed for desmin expression and stained for KIT protein without antigen retrieval. All cases which were KIT positive and desmin negative or very focally positive were regarded as GIST. All desmin positive/KIT negative cases were regarded as smooth muscle tumours. As approximately 5% of GISTs are c-kit negative any cases which were KIT negative and desmin negative were tested for CD34 and positive cases were regarded as KIT negative GISTs. All IHC was performed on an automated immunostainer with appropriate positive and negative controls.

Once a potential GIST was identified their identity was revealed to the Research Nurse who contacted the responsible clinician (Surgeon or General Practitioner). The Research Nurse and clinician wrote jointly to patients, inviting them for an interview to explain their re-classified disease. Informed consent was obtained for this part of the study and the re-classification of their diagnosis and its implications were informed by their Consultant and followed up according to local follow up guidelines for GIST (Scottish GIST Group, 2004). Data was collected regarding their demographics, original surgical treatment, subsequent therapies and survival, using the Statistics Package for Social Sciences (SPSS Version 12.0) database.

Crude incidence rates were calculated according to the number of new cases diagnosed during this time divided by the adult average yearly population of Scotland (www.gro-scotland.gov.uk). All pathology departments were included except Paediatric units as childhood GIST’s are extremely rare and therefore unlikely to have affected the incidence. The primary end point of this study was the crude incidence of GIST in Scotland. GIST specific overall survival was timed from the date of surgery to the date of death. Death was confirmed using hospital medical records and the Scottish Cancer Registry. Patients still alive were censored at the date of last know follow-up. Overall survival was estimated by the Kaplan-Meier method and patients dying of non-GIST causes were excluded. Prognostic factors for survival were compared by the Log Rank tests. The protocol was approved by the West II Glasgow Ethics Committee (MREC Reference Number 04/S0709/62).

Due to the time elapsed since diagnosis and in some cases death of patients we were unable to obtain all the clinico-pathological information on every patient. Table 2 summarises the patient and pathological characteristics. 97.5% of cases were symptomatic, though this data was only available for 32% of patients. 9.8% of patients were confirmed to be metastatic at presentation. Mitotic rate was available in 117 cases with a mean value of 5.47/50 HPF range (0-185). Lymph nodal involvement was only recorded in 8/125 cases. Median follow up time was 11.7 years. At the end of the study, 44.0% of patients were alive, 54.4% dead and 1.6% lost to follow up. In those patient presenting with metastases the median overall survival was 19 months compared to 97 months for those without (p=0.043). 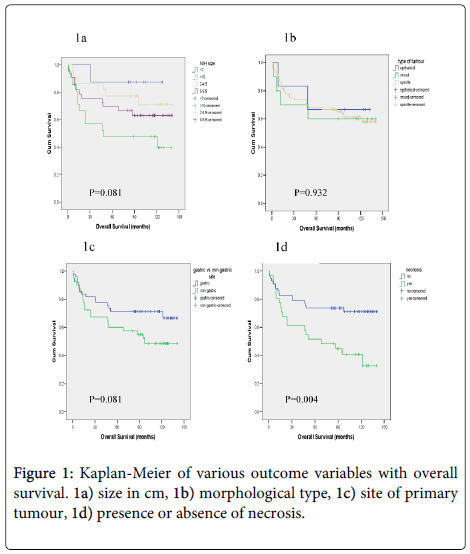 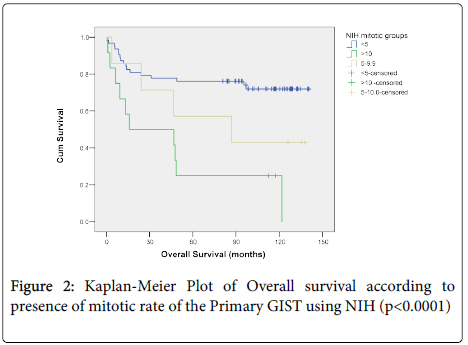 Figure 2: Kaplan-Meier Plot of Overall survival according to presence of mitotic rate of the Primary GIST using NIH (p<0.0001) 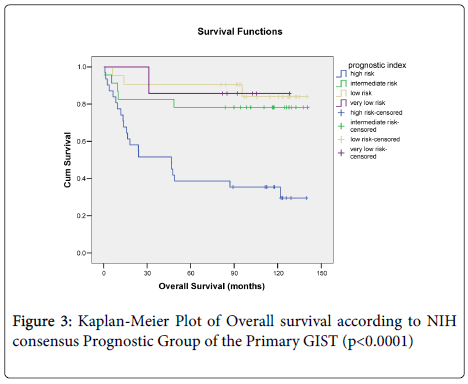 We demonstrated a crude incidence rate of 0.69/100000 in the Scottish population which is comparable although slightly lower than other studies (Table 3). The differences may have arisen due to a number of reasons such as the degree of pathological verification of GIST diagnosis, ability to identify asymptomatic cases and the fact that we predefined that cases had to be histopathalogically confirmed using CD117 ± CD34 There appear to be no major demographic discrepancies between our patients and those seen in other studies.

Table 3: Comparison with other studies of GIST incidence.

We only included primary presentations of GIST where as some studies have included recurrent disease. Due to the lack of knowledge of GIST at the time of the study pathologists performing autopsies were unlikely to make a specific comment on a small incidental GIST, though these may represent up to 10% of cases [10,13]. The dramatic effect of imatinib has led to an increased awareness of these tumours and this coupled with developments in diagnosis including detection of CD117 and CD34 may have led to higher incidence rates comparative to the pre-imatinib era. Goettsch et al. described an incidence rate of 2.1/million in 1995 and 12.7/million in 2003 [18]. The Norweigan study demonstrated a rate increase from 1.8 per million per million to 12.5 per million comparing 1980-1984 data to 2000-2004 [8]. A further trend for increasing GIST recognition has been noted in the latter years of other population based incidence studies [13]. Similarly a decline in non-GIST cases has been noted reflecting improved diagnostic accuracy [19]. The increasing use of mutational analysis in diagnosis of GIST will increase the accuracy of GIST incidence figures [17].

Several factors important in GIST management were confirmed in our study including median age [14], male: female distribution [10], tumour site [14]. In our series, nearly all cases were symptomatic, compared to 69% in the Swedish population [13]. Lymph node involvement was seen in 6.4% of cases which is similar to other series. These figures probably justify the current surgical approach of avoiding extensive lymph node dissection.

In relation to the AFIP criteria this population study is the first to relate the prognostic criteria to overall survival. It confirms a significant difference between prognostic groups which correlates with the risk of progressive disease [15]. However, there seems close overlap been the low and very low risk groups. This may be related to the small number of patients in this study but this close overlap has been noted previously in relation to recurrence free survival in a study comparing the NIH and AFIP criteria [20]. In a modified AFIP system the low risk groups were combined and a new very high risk category was created which consisted of gastric GISTs >10 cm and mitotic rate >5/50 HPF. This seemed more informative than the original AFIP criteria. The study may have been limited by its small number of 171 patients but does raise the possibility of further refinements to the AFIP criteria. This would need further studies with larger cohorts of patients to validate but could be of substantial importance if ongoing trials indicate a role for adjuvant imatinib therapy.

Our study is the largest UK study performed to date and has the longest follow up validating higher mitotic rate, the presence of necrosis and inclusion in the poor prognostic group according to the NIH consensus groups as all impacting on overall survival. In addition we have been able to validate the AFIP criteria, which appear to be a further improvement on the previous NIH consensus groupings.

The study was performed on behalf of the Scottish Managed Clinical Network for Sarcoma and supported by an unrestricted educational grant from Novartis Oncology. The authors wish to thank the patients for their co-operation and the Pathologists from involved hospitals and the General Practitioners and Hospital Physicians who were involved in obtaining informed consent.

The authors are very grateful to David Brewster at the Scottish Cancer Registry for input into the epidemiological analysis of the data.

Copyright: © 2014 Graham JS, et al. This is an open-access article distributed under the terms of the Creative Commons Attribution License, which permits unrestricted use, distribution, and reproduction in any medium, provided the original author and source are credited.