Copyright: © 2011 Minamide Y, et al. This is an open-access article distributed under the terms of the Creative Commons Attribution License, which permits unrestricted use, distribution, and reproduction in any medium, provided the original author and source are credited.

A highly sensitive liquid chromatography tandem mass spectrometry (LC-MS/MS) method was developed for quantitation of arabinofuranosylguanosine 5’-triphosphate (ara-GTP) in human peripheral blood mononuclear cells (PBMC). The determination of ara-GTP in PBMC was validated using a standard addition method with the human Tlymphoblastoid cell line as an alternative blank matrix. Ara-GTP was extracted with methanol/250 mmol/L ammonium carbonate solution (7/3, v/v) from the cells at a density of 106 cells per 0.5 mL. Extracts were subjected to LC-MS/ MS using a TurboIon spray interface and selected reaction monitoring with the transitions of m/z 524 to m/z 152 for quantitation. Endogenous guanosine triphosphate in the extract was used as an internal standard. Separation of the analytes was achieved on a porous graphitic carbon column (100 mm length × 2.1 mm i.d., 5 μm particle size) by isocratic elution with 250 mmol/L ammonium carbonate buffer (pH 9.5)/water/acetonitrile (40/51.5/8.5, v/v/v) at a flow rate of 0.2 mL/min. The method was validated in the range of 2–250 pg/mL. The pharmacokinetic profile of ara-GTP in PBMC in a Phase I clinical study of nelarabine in relapsed or refractory T-ALL/T-LBL patients was successfully determined using this method.

Nelarabine is an anticancer prodrug of 9-ß-Darabinofuranosylguanine, which is chemically modified arabinofuranosylguanine (ara-G) that is water-soluble. After intravenous administration, nelarabine is rapidly metabolized to ara-G via O-demethylation by adenosine deaminase, which is present in erythrocytes, intestinal mucosa, the spleen, and the thymus [1,2]. Ara-G is further metabolized in cells to arabinofuranosylguanosine 5’-triphosphate (ara-GTP). Ara-GTP is incorporated into DNA and inhibits DNA synthesis, which means it exhibits a cytotoxic effect in T-cell malignancies [1,3]. Gandhi et al. reported that the cellular concentration of ara-GTP was higher in responders than in nonresponders [4-6]. Therefore, it is important to measure the cellular ara- GTP concentration to predict the efficacy of nelarabine. In Gandhi’s method, because the cellular ara-GTP levels are very low, a large number of human peripheral blood mononuclear cells (PBMC) were required for the ara-GTP determination. Therefore, current methods for determination of cellular ara-GTP are usually limited in terms of determination sensitivity. Liquid chromatography-tandem mass spectrometry (LC-MS/MS) is a suitable choice for development of a sensitive method for ara-GTP determination.

Porous graphitic carbon (PGC) strongly adsorbs polar compounds, and it has been applied to separation of oligosaccharides, peptides and drugs [11-14]. PGC columns are composed of flat sheets of hexagonally arranged carbon atoms. The surface of the graphite is sensitive to the electronic density of the solutes [15]. This results in charge-induced dipoles at the graphite surface as analytes with positive and negative charges approach it. Therefore, PGC is suitable as a stationary phase for separation of nucleotides without an ion-pair reagent.

An internal standard is usually needed for LC-MS/MS analysis because of uncertainty in ionization and the amount of ions that enter the mass spectrometer. Although a stable isotope labeled analyte is the ideal internal standard, stable isotope labeled ara-GTP is difficult to obtain. Furthermore, a sufficient amount of PBMC is difficult to obtain from patients. Therefore, the standard addition method could be used for determination of the ara-GTP concentration in PBMC. Such a method should be suitable because the use of endogenous GTP in PBMC as an internal standard for quantitation will compensate for the peak intensity fluctuations among aliquots from the same sample.

To establish a sensitive and reproducible quantitation method for the determination of ara-GTP levels in PBMC, we developed a LC-MS/ MS method using a PGC analytical column and standard addition with endogenous guanosine triphosphate (GTP) as the internal standard. The evaluation and validation of the method are reported.

Validation samples (2, 20 and 200 pmol per106 cells) to establish the bias and precision of the method were prepared by adding the standard working solutions to the blank samples.

The samples were centrifuged at 18000 ×g for 10 min at 4°C. The supernatants were transferred to clean microcentrifuge tubes, and then evaporated to dryness at 40°C under a stream of nitrogen. The residues were reconstituted with 40 μL of 250 mmol/L ammonium carbonate buffer (pH 9.5)/water/acetonitrile (40/51.5/8.5, v/v/v), sonicated in a water bath for 1 min, and then transferred to HPLC vials.

Quantitation plots of the ara-GTP/GTP peak area ratio versus the amount of ara-GTP added per 106 cells were constructed using Microsoft Excel 2002 SP3, and least squares linear regression was applied to the data. The value of the x-intercept calculated from the quantitation plots represents the concentration of ara-GTP in the samples.

Method validation was conducted on the established quantitation method in accordance with the 2001 FDA Industry Bioanalytical Method Validation guide [16].

When determining the concentration of cellular ara-GTP, it is essential to separate the purine nucleotide analogue ara-GTP from other endogenous purine nucleotides. It is particularly important to separate ara-GTP from GTP, which is a stereoisomer of ara-GTP at the 2’-OH position in the sugar moiety (Figure 1). GTP was used in this study as an internal standard. Several types of analytical columns such as a PGC column, ion-exchanging columns, multimode-type columns and a polyfluorinated column were tested (data not shown). An adequate separation from GTP and other endogeneous constitutents was only achieved with a Hypercarb PGC column as ara-GTP is an epimer of GTP. Hence, the Hypercarb PGC column was selected for this study. This column gave good resolution of ara-GTP and GTP, probably because of the difference in the steric arrangement of 2’-OH in ara-GTP and GTP, which would result in different interactions of these compounds with the planar sheets of hexagonal carbon atoms. Among several buffers tested (data not shown), ammonium carbonate buffer solution (pH 9.5) was a suitable eluent for the separation and provided good peak profiles. Ara-GTP eluted at 19.4 min and the other nucleotides eluted with an adequate separation from ara-GTP (Figure 2). A stereo-isomer, GTP, was eluted before ara-GTP. Consequently, good separation of ara-GTP from purine nucleotides was achieved. 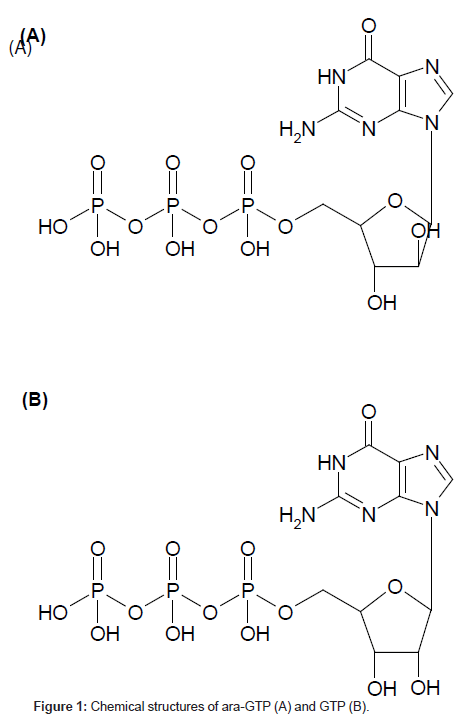 Figure 1: Chemical structures of ara-GTP (A) and GTP (B). 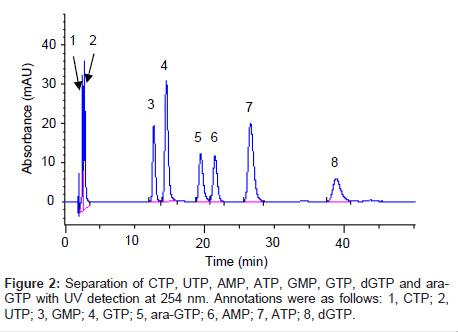 Characteristic precursor ions [M+H]+ at m/z 524 to 152 were consistent with the chemical structures of ara-GTP and GTP, and used as selective reaction monitoring transitions to ensure highly selective determination.

The selectivity of the method was assessed by analysis of blank samples. LC-MS/MS chromatograms of the blank and validation samples were visually examined and compared for chromatographic integrity and potential interferences. Representative chromatograms of the blank and validation samples are shown in figure 3. No unacceptable interferences from endogenous material were observed at the retention time of ara-GTP, and the GTP peak areas were reproducible for multiple samples.

To achieve good quantitation irrespective of the problems associated with the standard addition method, endogenous GTP, which elutes near ara-GTP, was used as an internal standard.

The plot of ara-GTP/GTP peak area ratio against the concentration of added ara-GTP was linear over the range 2–250 pmol per 106 cells (Figure 4). This indicates that the endogenous GTP was an appropriate internal standard for the quantitation. 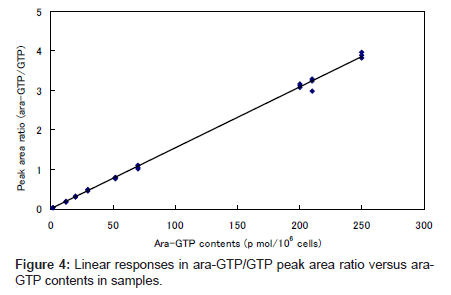 There were no contributions assessed as a carry-over, as none of the blank samples showed chromatographic peaks greater than 20 % of the mean response at the lower limit of quantitation (2 pmol per106 cells).

Stability of the processed extract

The stability of ara-GTP in processed extracts of cell samples spiked with ara-GTP at 2 and 200 pmol per 106 cells and stored for 96 h at 4°C was assessed in triplicate by comparing the mean responses to those of freshly prepared extract. The stability data are presented in Table 2. The percentage difference was less than 15 %, which indicates that ara-GTP is stable in processed extracts of spiked cell samples stored at 4°C for at least 96 h.

The stability of ara-GTP in cell extracts after four temperature cycles from the refrigerator (–80°C) to room temperature was assessed at 2 and 200 pmol per 106 cells (in triplicate). The mean responses were compared to those of the freshly prepared extract. The stability data are presented in Table 3. The percentage difference among the results was less than 15 %. This indicates that ara-GTP is stable in cell extracts after at least four temperature cycles from the refrigerator to room temperature.

Application of the method

The validated method was successfully applied to a Phase I clinical study of nelarabine in patients with relapsed or refractory T-ALL/TLBL. The pharmacokinetics of ara-GTP concentrations in PBMC in adult and pediatric patients have been reported elsewhere [17].

To develop a highly sensitive quantitation method for evaluation of cellular ara-GTP, we established a new LC-MS/MS method using a PGC analytical column and the standard addition method with endogenous GTP as the internal standard. This method was effectively applied to the elucidation of pharmacokinetic profiles of cellular ara-GTP in a Phase I clinical study of nelarabine in Japan. The established method is useful for determination of ara-GTP concentration in human PBMC at concentrations around a few picomoles per 106 cells.

The authors wish to acknowledge Dr. Takahiro Yamauchi (First Department of Internal Medicine, University of Fukui, Japan) for providing us the CCRF-CEM cells. We are grateful to Mr. Kohnosuke Kinoshita, Mr. Atsuhiro Mizuno and Ms. Yumiko Ohta for their assistance.