Inflammatory Bowel Disease (IBD) has two types as Crohn’s Disease (CD) and Ulcerative Colitis (UC) of which the etiology is unknown [1]. It is a multigenetic disease thought to be caused by environmental, genetic, microbial and immunoregulatory factors [2]. The prevalence of inflammatory bowel disease is increasing throughout the world, especially in USA, Europe, Middle East, Asia and South America [3-5]. Recently the prevalence of IBD is reported in Sri Lanka [6,7] although it was lower compared to western countries but comparable to Asian statistics [6]. The annual incidence of IBD, UC, CD in Sri Lanka were 1.6 per 100,000 population (95% CI: 1.1-2.2), 1 per 100,000 (95% CI: 0.6-1.5), and 0.6 per 100,000 (95% CI: 0.3-1.0) respectively [7]. However there is a lack of data on etiology, common symptoms and socio economic status of IBD patients in Sri Lanka.

A study was carried out in a base hospital in Sri Lanka from April 2016 to June 2016. The subjects of the survey were IBD patients who were registered for the gastroenterology clinic of the Colombo North Teaching Hospital, Ragama, Sri Lanka. A total of 32 patients including 13 male patients and 19 female patients were interviewed. Data including number of cases of IBD reported, number of male patients, number of female patients, number of cases of Crohn’s disease, number of cases of ulcerative colitis, age at diagnosis, monthly income level, district of residence, and symptoms shown at diagnosis were collected by interviewing all IBD patients by using a pre-tested semi-structured questionnaire. The hospital is situated in Gampaha district, therefore 70% of subjects were from Gampaha district and others were from adjacent districts Kegalle (20%) and Puttalam (10%). Out of the test group 4.17% of patients were Tamil and 95.83% were Sinhalese, with no patients from other ethnicities.

Results revealed that a higher percentage of subjects suffered from UC (87.5%) compared to CD (12.5%). In similarity to previous studies there was a predominance of IBD in women [6,7]. The prevalence of IBD, UC and CD among women was 59.38%, 57.14%and 75% respectively. There was a significantly lower (p<0.05) mean age at diagnosis for both CD (35.00 ± 0 years) and UC (33.45 ± 10.64) in males compared to the females (Table 1). The mean age at diagnosis in the study group was higher compared to Western populations (34.9 and 29.5 years for UC and CD respectively) similar to previous studies which may be due to either delayed diagnosis or milder disease with late presentation [3,6]. 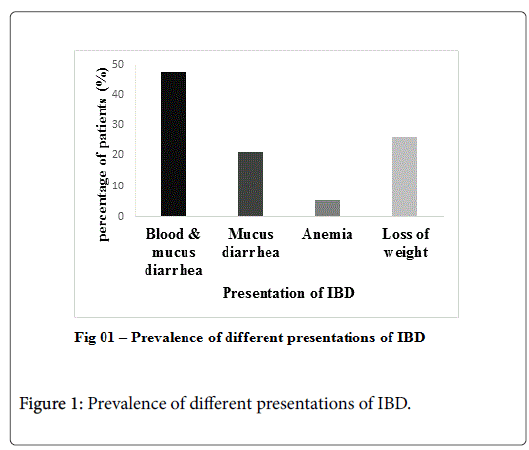 Family history of IBD is less common in Sri Lanka compared to Western countries, which may indicate a lesser genetic predisposition [6]. We have observed the similar results that none of the patients had known family history of IBD. None were suffering from other autoimmune diseases than IBD and there was no history of smoking, although smoking and family histories are factors related to IBD [8].

There was a significant difference in the number of patients belonging to different income groups (p<0.05) with from middle income level, from low income level and from high income level. The higher prevalence of IBD in middle income families compared to low income families is probably due to the shift of the diet to a more westernized high fat, low fiber diet and increased hygiene associated with increase in income level which are environmental factors affecting IBD [8], however it is not possible to draw firm conclusions due to the limited size of the study group. The female preponderance for UC, delayed age of diagnosis and less familial clustering are notable differences from Western population studies [9]. Investigation of these differences of IBD emerging in developing countries may give clues on its etiology and pathogenesis.

Copyright: © 2018 Jayampathi T, et al. This is an open-access article distributed under the terms of the Creative Commons Attribution License, which permits unrestricted use, distribution, and reproduction in any medium, provided the original author and source are credited.