The pathogenic mechanism of the infectious salmon anemia virus (ISAv) remains unknown. One methodological approach for solving this unknown is to understand the roles of each viral component separately. Therefore, the present study evaluated the viral nucleoprotein (NP) of ISAv to establish effects to reactive oxygen species (ROS) production and SUMOylation profile balance. Salmon head kidney-1 cells transfected with NP evidenced a strong respiratory burst activation and the genic induction of p47phox, SOD, GLURED, and Bad. Additionally, NPtransfected VERO cells showed alteration in the profile of SUMOylated proteins. Notably, pharmacological inhibition of the NADPH oxidase complex through apocynin blocked ROS production and high NP-mediated cellular ROS levels. These results suggest that the ISAv NP alone can trigger, in transfected cells, a strong production of ROS (able to activate pro-apoptotic marker expressions) and modifications to the post-translational profile mediated by SUMO-1.

The infectious salmon anemia virus (ISAv) is responsible for high economic losses in salmon farming [1], specifically affecting Atlantic salmon (Salmo salar). However, other fish can be asymptomatic carrier of ISAv, a phenomenon explaining the persistence of this pathogen in the salmon industry. ISAv replicates through an apoptosis-mediated cytopathic effect [2,3], a mechanism highly similar to other Orthomyxoviridae viruses, particularly the influenza A virus [4]. While the cellular aspects underlying apoptosis activation in infected fish cells are unidentified, some biochemical processes favor cell damage and/or death following viral infection, notably oxidative stress [5]. Nevertheless, the viral structure responsible for oxidative imbalance in host cells during infection is unknown. The NADPH oxidase complex is the principal mechanism for ROS production in the cell. In a recent report, ISAv was found able to activate the NADPH oxidase complex, particularly the p47phox subunit, through the p38 MAPK protein in S. salar . The substantial oxidative imbalance that occurred ultimately resulted in cell death [5]. Although alterations in cellular redox equilibrium irreversibly results in cell death, the preceding biochemical processes have not been analyzed in ISAv. One biological process affected by oxidative stress is the small ubiquitin-like modifier (SUMO)ylation of proteins.

Indeed, variations in oxidative stress can increase the global profile of proteins associated with post-translational modification by SUMO [6]. Modifications in the SUMO/deSUMOylation balance towards deSUMOylation could be a cellular attempt to equilibrate oxidative homeostasis. For example, oxidative stress induces a rapid deSUMOylation of several transcription factors, including AP-1, c-Fos, and c-Jun, among others, thus stimulating factor activity [7,8]. These post-translational modifications are key to the fate of various viral and cellular components under conditions of strong oxidative activity [9].

Various viral structures trigger very specific processes within the host cell during the biosynthesis of viral components. For example, the nucleocapsid protein of hepatitis virus C induces ROS production in tissue cultures and animal models [10]. Just as with ISAv, however, the mechanism by which the core protein induces ROS production is largely unknown. The viral Tax protein is another interesting example in which a single viral protein can strongly induce ROS production in transfected cells [11].

The aim of this study was to evaluate the effects of the ISAv nucleoprotein (NP) on ROS production and post-translational modifications in transfected cells. Changes in the SUMOylation expression profile and in molecular markers involved in oxidative stress and cell apoptosis were established through RT-qPCR and Western blotting. Measurements of oxidative stress were employed to quantify cellular ROS levels in the presence of viral proteins and pharmacological inhibitors of the NADPH oxidase complex.

After transfection, the following treatments were applied: 100 μM H2O2 (Merck) and/or 10 μM apocynin [12]. Cells were incubated in the respective growth environments until sampling at 8 and 16 h (SHK-1 cells) or 24 h (VERO cells). After incubation, all culturing media were removed prior to posterior analyses.

To obtain cDNA, total RNA was extracted from cell pellets with TRIzol (Invitrogen), following the manufacturer’s instructions, and then treated with amplification grade DNase I (1 U/mg RNA; Invitrogen). First-strand cDNA was synthesized from total RNA (1 μg) using the SuperScript III RNase H Reverse Transcriptase Kit (Invitrogen) with the oligo-dT18 primer at 50°C for 50 min. Real-time PCR analysis was performed in an ABI PRISM 7500 instrument using the SYBR Green PCR Core Reagents (Applied Biosystems, USA). Reaction mixtures were incubated for 10 min at 95°C, followed by 40 cycles of 15 s at 95°C and 1 min at 60°C, and, finally, 15 s at 95°C, 1 min at 60°C, and 15 s at 95°C. For each mRNA, gene expression was normalized to ribosomal protein S18 content (rps18) [12] in each sample using the comparative Ct method. The primers used for cellular markers are listed in Table 1. In all cases, each PCR was performed with triplicate samples and was repeated with at least three independent samples.

Oxidative stress was evaluated by adding the CellROX probe (5 μM; Life Technologies), following the manufacturer’s instructions, to transfected/treated SHK-1 cells. Cells were incubated for 30 min at 37°C; the medium was removed, and cells were washed three times with 1X PBS. Then, cells were fixed with 3.7% paraformaldehyde for 15 min, permeabilized with 0.1% TritonX-100 for 10 min, and incubated with DAPI 1:10000 for nuclei visualization. Finally, a mounting medium was added, and the Chamber slide was covered with a coverslip. Oxidative stress was visualized with the OLYMPUS IX71 epifluorescence microscope (Olympus) at 100X magnification

All data are shown as the mean ± SE. Differences were evaluated using ANOVA followed by the Student’s t-test. Statistical significance was defined as P˂0.05.

First, NP was overexpressed in SHK-1 cells (Figure 1), and expression levels were then determined via RT-qPCR (Table 2) and Western blot for p47phox (Figure 2), detoxifying oxidative stress genes, and molecular markers involved in apoptosis. 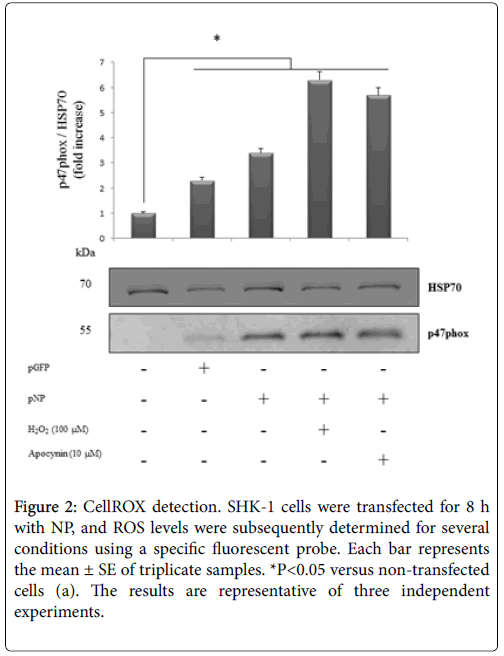 Figure 2: CellROX detection. SHK-1 cells were transfected for 8 h with NP, and ROS levels were subsequently determined for several conditions using a specific fluorescent probe. Each bar represents the mean ± SE of triplicate samples. *P<0.05 versus non-transfected cells (a). The results are representative of three independent experiments.

At 8 h post-transfection, p47phox expression was strongly increased and was nearly tripled at 24 h post-transfection. In the presence of H2O2, p47phox expression increased by 400%, but in the presence of apocynin, transcripts returned to basal levels (Table 2). Prior research revealed pro-apoptotic markers and oxygen radical detoxifiers modulated during viral infection. Therefore, the effects of NP overexpression on these transcripts were assessed. At 8 h posttransfection, the Bad gene was strongly expressed, but this phenomenon diminished at 24 h. In turn, strong Bcl-xl transcript expression was maintained at 8 and 24 h post-incubation (Table 2). These finding

indicate that NP overexpression is sufficient for triggering potential pro-apoptotic conditions. Similarly, SOD gene expression strongly increased only in response to NP, but not H2O2. Gene expression of GLURED also increased as a result of the NP stimulus, albeit well below levels recorded for the SOD (Table 2).

Prior research suggested a potential connection between Orthomyxoviridae, oxidative stress, and cellular SUMOylation levels. Therefore, VERO cells transfected with NP (8 h) and subject to different treatments were assessed by Western blotting to establish NP participation in the degree of post-translational, SUMO-mediated modifications. A basal protein profile of SUMOylation in the VERO cells was obtained (Figure 3, Lane 1). Interestingly, the incorporation of a foreign protein resulted in a 7% decrease in the SUMOylation signal level (Lane 2), a decreased that was much more drastic (47%) in NP-transfected cells (Lane 3). These findings are likely the consequence of a robust imbalance cellular ROS levels, as apparently mediated by NP. In cells transfected with NP and incubated with H2O2, the SUMOylation signal level slightly intensified (57%; Lane 4), while blocking of NADPH oxidase complex activity strongly increased the SUMOylation signal level (91%; Lane 5). These analyses strongly suggest that NP can modify cellular SUMOylation levels, apparently by increasing NADPH oxidase activity (Figure 3). 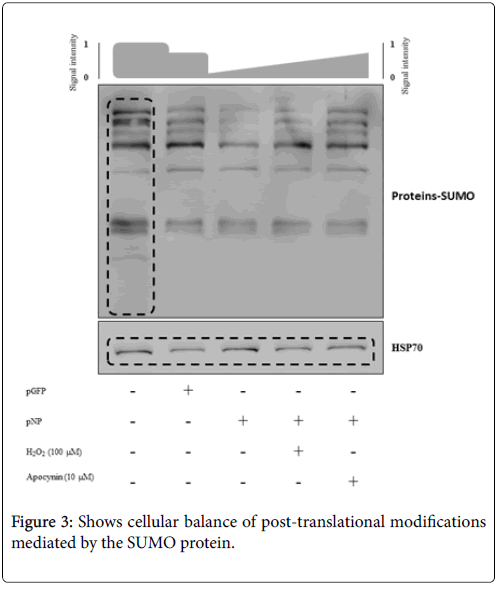 To corroborate the strongly suggested capacity of NP to modulate the NADPH oxidase complex, with consequent ROS increases and SUMOylation profile changes, the effect of NP on ROS production in the absence/presence of apocynin was assessed. Oxidative stress in SHK-1 cells was detected and quantified using the CellROX reagent, a fluorogenic probe. The obtained results showed a robust fluorescent signal that was higher in cells transfected with NP than with H2O2 (Figure 4). In contrast, SHK-1 cells treated with apocynin had weakly decreased fluorescent signals in the cytoplasm. These results substantiate the ability of NP to activate the NADPH complex, a producer of cellular ROS. Orthomyxoviridae viruses have been extensively studied due wide reaching impact on public health. Nevertheless, essential aspects of the infection mechanisms of these viruses remain unknown. Therefore, any insights contribute a valuable contribution towards the development of tools/strategies for the containment/eradication of these pathogens, including ISAv. Considering the scarcity of cellular and molecular research available for ISAv, investigations in other Orthomyxoviruses can serve as a starting point for advancing ISAv research. Indeed, preliminary research on the NADPH oxidase mechanism and oxidative stress in ISAv-infected fish is complemented by data reported in other Orthomyxoviruses [5,12,13]. Specifically, chemical subunit inhibitors of the NADPH oxidase complex possess therapeutic potential, decreasing lung inflammation and damage in rats infected with influenza A [14].

Comprehending a pathogen fundamentally requires understanding the roles of each viral component separately. Research of the available literature underscored the relevance of studying the participation of NP as an independent structure during ISAv infection. In Orthomyxoviruses, NP is the structural unit of ribonucleoproteins, which are formed by viral RNA and a heterotrimer polymerase complex comprised by the PB2, PB1 and PA protein subunits [15]. The NP is a 56 kDa monomeric basic protein that packages the RNA segments with a periodicity of one protein for each 24 bases of RNA. During viral biosynthesis, high NP concentrations exist in the host cell [16]. The consequences of this abrupt increase in NP were previously unclear, although studies indicated a probable interaction of NP with various cellular switches, as a consequence of the NP structure [17,18]. Overall, this phenomenon could contribute to ISAv pathogenesis.

The presently obtained results revealed that the strong increase of NP in SHK-1 cells stimulated the synthesis of p47phox and proapoptotic transcripts. The underlying molecular mechanisms triggering NP expression remain unknown, but this is a topic of future research. As possible starting points, prior studies reported the activation of the signal transduction pathways MAPK p38 and ERK 1/2 during ISAv infection. Particularly interesting, however, was the possibility of NP expression triggering changes in the cellular SUMOylation profile. The currently conducted experiments strongly suggest the participation of ROS; indeed, in the presence of a specific NADPH oxidase inhibitor, a protein profile similar to the control was recorded (Figure 3).

Research in distinct biological models indicates that oxidative stress mediated by oxygen radicals modifies proteins through SUMOylation (Meulmeester and Melchior, 2008). Protein SUMOylation is a posttranslational mechanism able to modify the activity, expression, and localization of a protein through a covalent bond of a SUMO [19]. Later investigation reported that “all cells incubated under a condition of elevated oxidative stress resulted in an increase in the SUMOylation of proteins” [20], and emerging evidence strongly suggests that altering the SUMOylation balance could be an important factor of many pathologies, such as cancer, diabetes, and neurodegenerative diseases, among others [21,22]. Interestingly, SUMOylation could also be involved in the progression of various viral infections [23-25].

Contributing to this foundation, the present study found that a single ISAv protein, namely NP, can generate conditions that alter the cellular balance of post-translational modifications mediated by the SUMO protein (Figure 3).

This work was supported by the Department of Investigation (Universidad Austral de Chile) and the Chilean National Fund for Scientific and Technological Development (FONDECYT) [grant number 11150560].

Copyright: © 2017 Fredericksen F, et al. This is an open-access article distributed under the terms of the Creative Commons Attribution License, which permits unrestricted use, distribution, and reproduction in any medium, provided the original author and source are credited.