Acupuncture Treatment for Allergic Rhinitis: Why should Physicians Recommend it?

Allergic rhinitis is an IgE-mediated inflammation of the nasal mucosa that is clinically expressed with sneezing, nasal congestion/pruritus and rhinorrhea, in any combination. With nearly 10%-20% of the global population suffering from allergic rhinitis, it is obvious that it affects significantly patient’s quality of life and productivity, as well as imposes a huge economic burden through associated healthcare costs. Current pharmacological treatment (H1- antihistamines, glucocorticosteroids, leukotriene antagonists, decongestants, anticholinergics), as well as allergen immunotherapy, usually fail to achieve complete remission of symptoms or cause treatment-related side-effects. Extensive clinical and experimental investigations over the last decades have shed light on the efficacy, as well as mechanisms of action of acupuncture treatment for allergic rhinitis. We present the available data, to date, which suggest that acupuncture should be part of the treatment algorithm for allergic rhinitis patients.

Allergic rhinitis is an immune-mediated inflammation of the nasal mucosa that is characterized by sneezing, nasal congestion/pruritus and rhinorrhea, in any combination [1]. It can be classified as seasonal allergic rhinitis or persistent allergic rhinitis based on the duration and severity of symptoms. Although it is not a life-threatening condition (unless accompanied by severe asthma or anaphylaxis), associated morbidity can be significant and include: otitis media sleep disturbance, acute/chronic sinusitis, palatal abnormalities and eustachian tube dysfunction [2]. It has been found that nearly 10%-20% of the global population suffers from allergic rhinitis and this affects their quality of life and productivity [3].

Despite recent advances in pharmacological treatment (H1- antihistamines, glucocorticosteroids, leukotriene antagonists, decongestants, anticholinergics), as well as allergen immunotherapy, a large proportion of patients with allergic rhinitis fail to achieve remission of symptoms or present treatment-related side-effects [4,5]. Furthermore, the annual cost of treatment for allergic rhinitis patients exceeds the enormous amount of $1.2 billion in the USA and €1-1.5 billion in Europe, thus it is obvious that there is an unmet need for a more effective and less expensive treatment modality [4].

Acupuncture has been extensively used in China for many centuries and recently in many Western countries as well, for the treatment of a wide range of diseases, including allergic rhinitis. We present the latest available clinical and experimental data regarding acupuncture treatment's efficiency in allergic rhinitis that justify its incorporation into modern medical practice.

Allergic rhinitis is an IgE-mediated inflammatory response, that involves interaction between inflammatory cells (eosinophils and mast cells), proinflammatory cytokines (such as TNF-α, IL-1β, IL-6, and IL-10) and neuropeptides [like substance P, calcitonin gene-related peptide (CGRP) and vasoactive intestinal peptide (VIP), that induce histamine release, vasodilation and plasma extravasation] Figure 1 [6-8]. Nearly 90% of patients with allergic rhinitis can react, not only to allergens, but also to environmental irritants such as cold air, smoke and perfumes [9]. 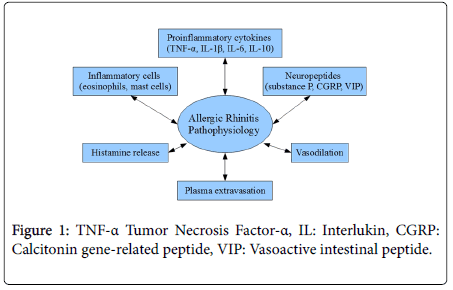 Acupuncture-induced anti-inflammatory effects are mediated via several physiological pathways, such as the hypothalamus-pituitaryadrenal (HPA) axis, the sympathetic and parasympathetic (cholinergic) pathways, as well as actions on histamine, cytokines (such as TNF-α, IL-1β, IL-6 and IL-10) and neuropeptides (such as substance P, CGRP, and VIP) release Figure 2 [10-19]. 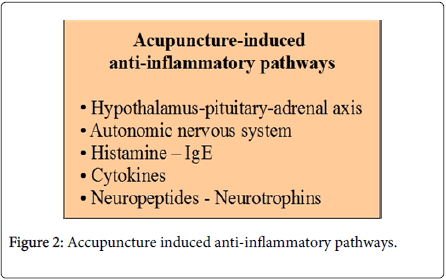 Electroacupuncture (a more potent form of classical acupuncture) has been shown to significantly increase ACTH and cortisone levels in experimental animal studies of induced inflammation [17,18]. The anti-inflammatory effects of these hormones can be associated with the reduction of nasal congestion in patients with allergic rhinitis via inhibition of mucosal edema [20].

Sympathetic post-ganglionic neurons, as well as sympathoadrenal medullary axis have also been found to play significant role in edema suppression after electroacupuncture treatment [21].

It has been shown recently that the cholinergic anti-inflammatory pathway (via activation of the vagus nerve) can be activated by acupuncture [19]. Therefore, parasympathetic innervation mediated by acetylcholine (Ach) that binds to α7-nicotinic receptors (α7nAChR), also contributes to acupuncture's anti-inflammatory effects [14,22].

Acupuncture has been found to inhibit histamine-induced symptoms of allergic rhinitis (such as nasal pruritus), possibly through down-regulation of TRPV1 receptors signaling which in turn reduces degranulation of mast cells and thus, histamine release and histamine activation of TRPV1 via H1R [13,23,24]. IgE blood concentration has also been reported to be reduced after acupuncture treatment [25,26].

CD4+ lymphocytes play a key role in mediating allergic rhinitis. Particularly, the alteration of Th1/Th2 cells ratio seems to be of high significance for the development of allergic rhinitis [27-30]. Th1 cells produce cytokines interleukin(IL)-2, IFN-γ and TNF-β that lead to a cellular immune response, while Th2 cells on the other hand, produce IL-4, IL-5, IL-10 and IL-13 that regulate the development of B cells to plasma cells and immunoglobulin E (IgE) production [31,32].

Signal transducer and activator of transcription 6 (STAT6) is involved in the production of interleukin (IL)–4, an important Th2 cytokine in allergic disease [37]. Nuclear factor kappa B (NFkB) is the most important transcription factor in iNOS gene expression [38]. Inducible nitric oxide synthase (iNOS) is involved in nitric oxide production which increases the mucociliary movement of paranasal mucosa [39]. In an experimental mouse model of ovalbumin-induced allergic rhinitis, acupuncture treatment resulted in significant decreases in blood eosinophil count, substance P and activities of STAT6, NFkB, and iNOS, compared to levocetirizine administration (antihistaminic drug) [40].

Regarding proinflammatory neuropeptides, electroacupuncture was found to significantly decrease substance P and VIP levels, which correlates with clinical improvement in patients with allergic rhinitis [16,40]. Finally, it down-regulates neurotrophins (nerve growth factor - NGF and brain-derived neurotrophic factor - BDNF) which are considered key players of the inflammatory cascade that leads to allergic rhinitis [20,41,42].

Current treatment strategy for allergic rhinitis include allergen exposure avoidance, pharmacological treatment (such as antihistamines and intranasal glucocorticosteroids) and immunotherapy [46,47]. However, these treatment modalities are often cost-ineffective, since they usually fail to provide complete symptom remission and they are often associated with several undesirable side effects [46-49].

Recent evidence suggest that acupuncture is an effective and safe treatment modality for allergic rhinitis, when practiced by an experienced acupuncturist, and may even be superior to routine medication [50]. Moreover, the combination of acupuncture and routine medication is associated with statistically beneficial clinical outcome [51].

The efficacy of acupuncture in allergic rhinitis and other allergic diseases, such as asthma or allergic eczema, appears to be due to cytokine profile regulation of Th1/Th2 cells and particularly in the expression of IL-10, IL-2 and IFN-γ [11,35,36]. However, numerous other pathways are also involved, such as the HPA axis, the sympathetic/parasympathetic nervous system and neuropeptides/ neurotrophins alteration.

Given the clinical efficacy and safety of acupuncture treatment, as well as its multiplicity of therapeutic pathways for allergic rhinitis, it should be part of the armamentarium of each physician treating patients with this condition.

All authors contributed with manuscript writing.

Copyright: © 2017 Panagiotis Z, et al. This is an open-access article distributed under the terms of the Creative Commons Attribution License, which permits unrestricted use, distribution, and reproduction in any medium, provided the original author and source are credited.