Adequate Selection of Oropharynx Carcinoma Treatment in the Elderly

Forty seven percent of patients diagnosed in the US between 1973-2008 were ≥ 65 years old and predicted to be >60% by 2030. However, clinical trials do not usually include patients >70 years, so we do not have experience in this increasing field. We present the case of a 79-year-old patient in whom the treatment decision should be well discussed according to comorbidity, treatment toxicity and survival rates.

79-year-old male with a personal history of ex-smoker of 20 packs/year, hypertension and chronic renal failure stage III. In 2010 two acute myocardial strokes, needing a resynchronization defibrillator (ICD). In 2013, a subdural bleeding which improved with conservative treatment. He went to Otorhinolaryngology Clinic in September 2014 because of oral bleeding from a month ago, performing:

2. Neck CT: 40 mm tumor in the left half of the lingual base with extension to preepiglottic (cT4a N0). After diagnosis of tongue squamous cell carcinoma cT4a Nx M0, it was decided a concurrent scheme of Cetuximab (400 mg/m2 initially, followed by weekly dose of 250 mg/m2 × 7 weeks) and radiotherapy (IMRT, 70 Gy). Cisplatin was avoided for renal and haematological toxicity. After 2 weeks, he presented with mucositis grade II-III and skin toxicity, worsening at 4 weeks because of grade IV mucositis. He was admitted due to oral intolerance and weight loss of 7 kg in 3 months (prealbumin 14), improving with a nasogastric tube placement (SNG) and management of pain and mucositis. Cetuximab was reintroduced at a lower dose, however at 7 days, he was admitted again for nosocomial pneumonia, and so after 4 cycles of Cetuximab and 50 Gy, we stopped bioRT. Good symptom control in the following months, improving weight up to 54 Kg. However, PET-CT inf February 2015 showed a new hypermetabolic focus in the anterior region of the tongue (Figure 2), confirmed with a biopsy which described a persistence of moderately differentiated epidermoid carcinoma. 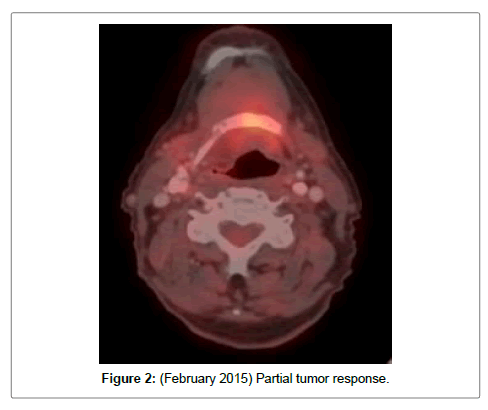 The case is referred to the Tumor Committee and surgery is discarded because of high surgical risk. Palliative treatment is started with chemotherapy (Paclitaxel+Cetuximab), needing to stop Cetuximab because of an infussion reaction consisting in hypotension and loss of knowledge. Valued by Cardiology, acute cardiologic cause is ruled out but an allergic reaction to Cetuximab is assumed and weekly paclitaxel is maintained. Good hematological tolerance until May 2015 (maintains weight 55 kg) when presenting grade IV neuropathy that forces the suspension.

The patient maintains ECOG 1 and decides 2nd line with Methotrexate. However, he was again admitted because of febrile neutropenia secondary to microaspirations, mucositis and pancitopenia grade II. Finally died after not improving with broadspectrum antibiotic therapy.

Patients >65 years old are diagnosed at earlier stages and more than 25% are not treated, being the benefit of surgery better than chemoradiotherapy. Whereas in patients aged 45-54 CRT offers a 63-month overall survival benefit vs. 31 months when no treatment is performed. In the elderly the survival rates improves from 11 months to 50 months with combined treatment or surgery (so benefit is 5 times higher) 27% never get treated. Therefore, in the case of tumors in the early stages, where the treatment can offer more benefit, there is a tendency to treat them less radically.

We really let ourselves be guided more by age than by the concept of fragility, which we evaluated erroneously through Performance Status (PS). At Repetto study they describe 363 patients >65 years old, with 74% presenting a PS<2, while only 52% were independent for instrumental activities of daily living which is a factor that marks fragility.

Therefore, we need comorbidity rating scales to decide which patients to treat. One of them is ACE 27 (grade 1 to 3), which evaluates cardiac, renal, respiratory, infectious and neoplastic disease. Datema study compares the 2-year survival (46%) of patients with grade 3 toxicity, being similar to locally advanced tumors (T4, N2), whereas without comorbidities it increases up to 75% [1]. In our patient, we presented an ACE 27=2, because of cardiac and renal disease.

In locally advanced tumors, CRT is the standard of treatment. However, we tend to use Cetuximab since it produces lower haematological and renal toxicity, although we do not have any study to prove it in elderly ones (Bonner study, 19% >65 years).

Actually, several studies support surgery as a standard of treatment in elderly patients because of poor tolerability to combined treatment. In our case, it is not an option by high surgical risk, however this risk must also be assessed by scales and not only by age. Thus, PACE scale is increasing use to assess surgical risk including activities of daily living, depression, loss of body mass, performance status and anesthetic risk [2].

If surgery is contraindicated CRT or just RT/CT? We do not have any phase III study performed in elderly patients comparing these treatments: in some retrospective the single use of RT is defended while in others it is preferred CRT. Toxicity with CT vs. CRT is similar in terms of mucositis 52 vs. 68% and dermatitis 18 vs. 23%. So usually, combined treatment is preferred, being very important to maintain dose intensity and finishing treatment. Cetuximab-RT (bioRT) scheme is preferred in this patient profile, since the Grade III toxicity in the Bonner study is low, although as previously explained only 19% of the patients had >65 years [3].

On the progression, we have the phase III study of EXTREME (5-FU+Cisplatin+Cetuximab) or phase II of Hitt (Paclitaxel- Cetuximab, OS 8.1 months), with fewer side effects in the 2nd, which is an alternative to Cisplatin, achieving good response rates (20.43%) [4]. Efficacy of methotrexate is lower than docetaxel, achieving a response rate of 15% vs. 27%.

Supporting treatment improves tolerance to CT. Regarding nutrition, the use of the enteral route when oral is not possible is the choice if weight loss is >5%. Regarding the use of NGP or PEG, the indication marks the time it is expected to take (more or less than 4 weeks), while the indication of prophylactic enteral nutrition is a controversial issue when there is toxicity Weight loss, and against the loss of swallowing and atrophy), so we have to individualize [5].

Tumors are more frequent in elderly patients, with little representativeness at clinical trials and without sufficient scales to decide which therapeutic strategy is optimal. We defend a geriatric assessment, Multidisciplinary Committees and a greater use of scales to assess comorbidities (ACE 27) and surgical risk (PACE).

Copyright: ©2017 Beatriz LV. This is an open-access article distributed under the terms of the Creative Commons Attribution License, which permits unrestricted use, distribution, and reproduction in any medium, provided the original author and source are credited.