Copyright: © 2015 Suzuki Y, et al. This is an open-access article distributed under the terms of the Creative Commons Attribution License, which permits unrestricted use, distribution, and reproduction in any medium, provided the original author and source are credited.

Gangliosides isolated from biological sources are usually detected as sodium/potassium adduct ions and these ions are easily fragmented by dissociation of labile glycosidic bonds in the positive ion mode Mass Spectrometry (MS). A large number of conditions for fragment suppression of these acidic glycolipids by using non-acidic matrices or changing metal additions have been demonstrated. Compared to sodium/potassium adduct ions, the cesium adduct ions suppress the fragmentation of these acidic glycolipids. On the contrary, lithium adduct ions induce the fragmentation, but generate more informative fragment ions of glycolipids than other alkali metal adduct ions in post-source decay, MS/MS as well as MS spectra. To suppress the fragmentation of labile glycosidic bond and generate more informative fragmentation, we have examined and established the optimal condition for the detection of [M+Li]+ of gangliosides (GM3 and GM2) using the matrix-assisted laser desorption/ionization time-of-flight MS by adjusting matrix and alkali metal salt combinations and concentrations.

Gangliosides are sialic acid-containing glycosphingolipids, which are components of plasma membrane. It is well known that gangliosides/glycophospholipids play important roles in a wide variety of cellular functions, including cell-cell interactions, cell growth and differentiation, and signaling [1-3]. A detailed structural characterization is required to resolve their functions. A number of analytical methods are available for the characterization of the gangliosides/glycophospholipids. Matrix-Assisted Laser Desorption/ Ionization Time-of-Flight Mass Spectrometry (MALDI-TOF MS) is one of the indispensable tools for the rapid structural characterization [4,5]. In the positive ion mode MS spectra of biological samples, sodium/potassium adduct (Na+/K+) ions are usually detected and the labile glycosidic/phosphate bonds are easily fragmented [5]. Since the detection of molecular ions is required for the determination of whole molecular weight and simple interpretation of MS pattern, the suppression of the acidic glycolipid fragments are important and necessary. Furthermore, informative Na+/K+ fragments are often hardly obtained by further mass analysis, such as Post-Source Decay (PSD) or MS/MS. Therefore, the detailed structural information of glycolipids requires fragment acceleration. As described above, an understanding of the reciprocal events between fragment suppression and acceleration is necessary for characterization of glycolipids.

In the MS spectra, the stabilities and properties of ions are drastically changed by alkali metal species, and the cationization is easily changed by the addition of alkali metal salts to the sample. Lithium salts accelerate fragmentation of the labile compound, and hence the relative intensities of molecular ions are decreased in the MS spectra. However, lithium adduct (Li+) ions of these gangliosides or phospholipids generate more informative fragment ions than other alkali metal ions in the MS/MS [6-10]. On the other hand, cesium salts suppress fragmentation of the labile compound, and the relative intensities of molecular ions are increased in the MS spectra. However, cesium adduct (Cs+) ions do not generate sufficient fragment ions for characterization of the acidic glycolipids in MS/MS compared to other alkali metal ions [11]. As described above, molecular ions could be obtained by changing the molecular ions from Na+/K+ to Cs+ adducts for MS analysis, and detailed fragment ions could be obtained by changing molecular ions to Li+ adducts for MS/MS analysis. Li+ and Cs+ have compatible properties, and combining the advantageous properties of lithium and cesium salts helps in controlling the ionizing condition of these glycolipids.

To suppress the fragmentation of labile compounds, the use of various kinds of matrices are also reported including non-acidic and liquid matrices for MALDI-TOF MS analysis [12-17]. So far, 2,5-Dihydroxybenzoic Acid (DHB) is the most widely used matrix for glycoconjugate analysis. Compared to the other common matrices such as α-cyano-4-hydroxycinnamic acid (CHCA) and sinapinic acid, DHB allows softer desorption. Under 337 nm radiation, non-acidic matrices such as 2-amino-3-hydroxypyridine, norharman, 6-aza-2- thiothymine, and 2'4'6'-trihydroxyacetophenone, were used for the fragment suppression of acid-labile compounds like synthetic polymer, acidic oligosaccharide, glycopeptides, and other glycoconjugates [18]. Furthermore, liquid matrix of DHB with butylamine (DHBB) suppressed neuraminic acid fragmentation of monosialylmonofucosyl- lacto-N-neohexaose, ganglioside, and 3'-sialyllactose [16]. Liquid matrix of 2-(4-hydroxyphenylazo)benzoic acid (HABA) with 1,1,3,3-tetramethylguanidine and spermine were used for heparin sulfate [17]. Recently, Liang et al., showed that frozen solution of aqueous acetonitrile containing oligosaccharides and DHB generates more oligosaccharide ions and less fragments from PSD spectra [19].

As described above, a number of trials for regulating the fragment pattern of labile compounds including gangliosides using alkalimetal addition and non-acidic/liquid matrix have been reported. The fragment patterns were regulated by the species and concentrations of matrices and alkali-metal salts. In this study, we established an optimum condition for the analysis of GM3 and GM2 gangliosides using alkalimetal salts and non-acidic matrices.

MALDI-TOF MS was performed on a Voyager RP-PRO MALDITOF mass spectrometer (Life Tech., California, USA) equipped with a 337 nm nitrogen laser. MS spectra was calibrated externally using a peptide calibration standard mixture containing bradykinin ([M+H]+, 757.40), angiotensin II ([M+H]+, 1045.64), and human adrenocorticotrophic hormone (ACTH, fragments 18-39) ([M+H]+, 2465.20) as 10 pmol/μL solutions. The ganglioside GM3 were dissolved in chloroform/methanol (C/M, 1:1, v/v) as 10 mg/mL solutions. The matrices used in this study were dissolved in water at concentrations of 10 mg/mL. The alkali metal salts were also dissolved in water at various concentrations. The matrix, alkali metal salts, and GM3 or GM2 were mixed in a glass tube and placed on the target plate for crystallization. Crystallization was accelerated by a gentle stream of cold air.

Figure 1 shows the structures of matrices used in this study. To determine the optimal condition for ganglioside analysis, various concentrations of GM3 (1 nmol, 100 pmol, 10 pmol, and 1 pmol) in DHB matrix were analyzed by MALDI-TOF MS in positive ion mode (Figure 2A-2D). In the MS spectra, the molecular ions were detected at m/z 1205 and 1233, and the ions derived from loss of sialic acid from GM3 were detected as sodium adducts at m/z 913 and 941. The ions derived by the loss of carbon dioxide from GM3 were also detected as sodium adducts at m/z 1161 and 1189. On the other hand, the background peaks at m/z 768 and 1017 were detected, and poor signal to noise ratios were observed in the lower concentrations (1 and 10 pmol) of GM3 were observed (Figure 2C and 2D). Therefore, further experiments were carried out using 100 pmol of GM3. 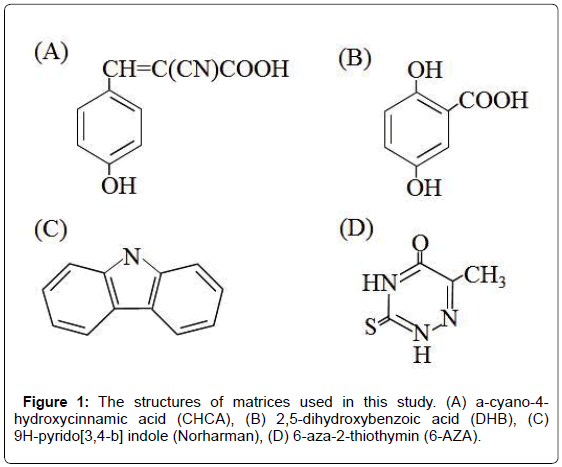 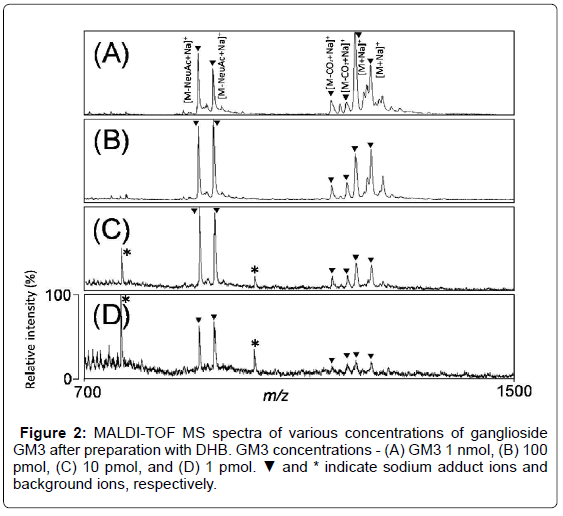 These results indicate that lithium ions induce and cesium ions suppress the fragmentation of gangliosides, compared to sodium/ potassium adduct ions which are usually detected in MALDI-TOF MS, as reported previously. Therefore, we concluded that the optimal concentration of these salts were few nmols for changing cationization.

Effect of matrices on MALDI-TOF MS pattern of GM3 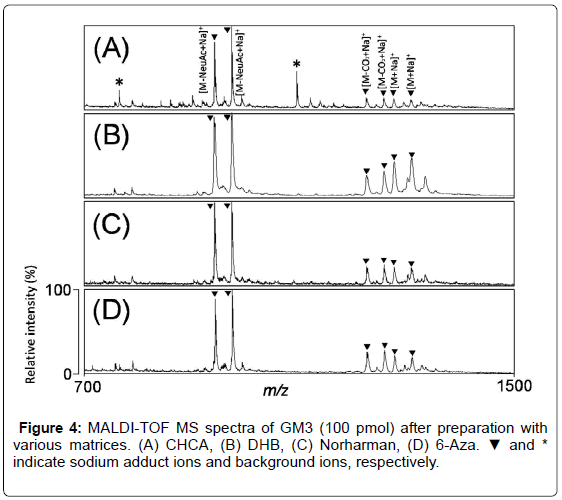 We analyzed MALDI-TOF MS spectra of GM3 after preparation with DHB and 4 nmol of LiCl, and various concentrations of CsCl. The GM3 derived ions were detected as single or double cesium adducts as well as sodium adducts under high concentration of CsCl (400 nmol) (Figure 5A). On the other hand, the GM3 derived ions were detected as sodium and lithium adducts under low concentrations of CsCl (40, 4 nmol, or 400 pmol) (Figure 5B-5D). After preparation with DHB, LiCl, and CsCl, fragmentation of GM3 was not suppressed, and the lithiated molecular ions of GM3 ([M+Li]+) could not be detected (Figure 5A- 5D). Norharman do not contain any acidic functional group, and is a more non-acidic matrix than DHB. Therefore, Norharman can be used for acid-labile samples and fragment suppression of sialic acid. We analyzed MALDI-TOF MS spectra of GM3 after preparation with Norharman and 4 nmol of LiCl, and various concentrations of CsCl. Although single and double cesiated molecular ions of GM3 were detected under high concentration of CsCl (400 nmol) (Figure 5E), lithiated molecular ions of GM3 were detected (Figure 5F-5H). Furthermore, NeuAc-dissociated ions were remarkably suppressed (Figure 5E-5H). These results indicated that the optimal analytical conditions for gangliosides using Norharman, LiCl, and CsCl inhibit dissociation of sialic acid, while allowing the detection of lithiated molecular ions of GM3. 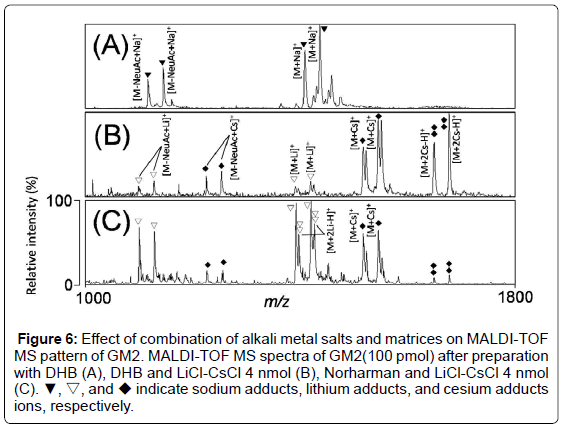 These results indicated that, our approach of adjusting the matrix, and alkali metal salt combinations and concentrations are powerful tools for changing the alkali metal cation species in gangliosides during analysis by MALDI-TOF MS.

Alkali metal cations were investigated for their effectiveness in glycolipid analysis by MALDI-TOF MS [5-8]. The fragmentation yields for oligosaccharides or glycolipids were found to be related to alkali metal ion size and electrostatic charge density. Li adducts increase fragmentations of labile glycosidic bonds as well as ceramide moieties of glycolipids [5,8,10,21]. Cs adducts decrease fragmentations of glycolipids, therefore molecular ions can be detected in the MS spectra [11,18]. Although the fragmentation of sialic acid is not efficiently suppressed, the molecular ions of GM3 were changed from Na+ to Cs+ after preparation with Li/Cs alkali metal salts and DHB. Finally, the conditions for fragment suppression of sialic acid and detection of [M+Li]+ ions were established by the combinations of these alkali salts and Norharman.

Recently, new types of mass spectrometries, such as MALDI ionmobility MS, have been developed and they have become powerful tools for the ganglioside analyses [22]. Our established method is quite simple and easily adjustable; therefore it is also thought to be useful for the analysis of other glycolipids as well as gangliosides by regardless of mass types. Furthermore, 2,6-dihydroxyacetophenone (DHAP) has been reported as a new matrix for acidic glycolipid analysis [23]. In our preliminary data, we confirmed the fragmentation suppression of ganglioside GM3 using DHAP more effectively than Norharman, but the cesium adducted molecular ions were detected as the major peaks under the established condition. In the future, we will examine the applicability of this established method in the analysis of other acidic glycolipids, and will confirm the optimal condition of DHAP preparation and effectiveness of liquid matrices on the glycolipid analysis using this method.

In this study, we established the optimal condition for the detection of [M+Li]+ of gangliosides (GM3 and GM2) using the MALDITOF MS by adjusting matrix and alkali metal salt combinations and concentrations. This is the first study reporting a quite simple method for the detection of lithiated molecular ion of ganglioside in the positive ion MS. In the near future, we would expect that more detailed information of ganglioside is determined by MS/MS with selection of [M+Li]+ . Furthermore, the optimization of ionization and Cs/Li salt combinations is quite simple and easily adjustable method, as shown in this manuscript. Therefore, we also expect that the method would be useful to ganglioside as well as other glycolipid analyses even using other mass spectrometries.

This work was supported by Nihon University College of Science and Technology Grant-in Aid for Fundamental Science Research (YS), and partly supported by Grant-in-Aid for Young Scientists (B) No. 24750164 from MEXT Japan (YS). The authors declare no conflicts of interest.