Background: The use of adult-sized kidneys seems applicable to low-weight children where size-matched donors are scarce. The aim of this study is to assess the impact of donor-recipient size mismatch on long-term renal graft and patient survival in small recipients, in order to optimize graft allocation.
Methods: Between 1999-2010, 46 renal transplants were performed in recipients glomerular filtration rate (GFR), proteinuria, rejection episodes, graft and patient survival were analyzed and compared between groups at the time of transplantation (T0), at one (T1), two (T2), five years (T5), and at the end of the study (TF).
Results: The mean renal size (longitudinal length in cm) was significantly different at T0, T1 and T2 between both groups (pT0<0.01; pT1<0.01; pT2<0.01), showing a significant increase in group B during the follow up, being similar to group A at T5 and TF (pT5=0.16; pTF=0.92). The mean GFR (ml/min/1.73 m2) was significantly higher at T0 in group A, compared to B (GFRA=148 ± 47; GFRB=111 ± 33; pT0=0.01); at T1 it decreased in A and increased in B (GFRA=127 ± 38; GFRB=121 ± 31; pT1=0.66), with similar values in both groups at T2, T5 y TF (pT2=0.83; pT5=0.15; pTF=0.90). During follow-up (8.6 ± 4.1 yrs) 9 grafts were lost, 2 in A and 7 in B. Two patients died in group B. No significant differences were observed in graft and patient survival at 5 and 10 years (p=0.66; p=0.19) neither proteinuria nor rejection. Conclusion: Adult-sized grafts in small recipients showed a reduction of the function, but remained a stable size. These grafts can be safely transplanted with comparable outcomes to size-matched kidneys.

Renal transplantation(RT) is the treatment of choice for children with end-stage renal disease (ESRD) [1-3]. Children with wellfunctioning graft have a better quality of life, improved cognitive development and near normal growth in comparison with dialysis [4,5]. Dialysis confers a fourfold increase in mortality risk to the child [6,7]. Living-donor renal transplantation offers shorter waiting times for recipients that can alleviate the side effects of dialysis, and gives some advantages, including better quality kidneys, with reduced delayed graft function, decreased hospital costs, and the opportunity for a preemptive transplant. There is a limited number of potential aged or sized-matched donors with a disproportionately long waiting times for very young recipients [8]. The use of adult size kidneys may provide a valid alternative to tackle the scarcity of age and size-matched donors in low-weight children, especially in this group of patients where there is usually one or both parents willing to be a living related donor. However, the use of adult or large size kidneys in children is a more technically challenging procedure compared to the size-matched transplantation. It may involve risk of thrombosis due to complications in the anastomoses, consequent to vessel size disparity, as well as organ hypoperfusion. In addition, difficulties in closing the abdominal wall might be a problem in small children [8,9].

The aim of this study was to assess the impact of donor-recipient size mismatch on long-term renal graft survival in small recipients, in order to optimize graft allocation.

A retrospective review of patients under 20 kg with ESRD who underwent a primary renal transplantation during the period 1999- 2010 in our center was performed. Patients were stratified in two groups (A and B) according to the donor-recipient size concordance. Group A corresponding to recipients of an Adult-sized graft, and group B corresponding to recipients of size-matched graft.

All renal transplants were performed using an extraperitoneal approach in the right iliac fossa. Arterial and venous end-to-side anastomoses were done to the aorta and vena cava or to the common iliac vessels when it was possible. The graft´s ureter was implanted using the extravesical Lich Gregoir technique. Patients received an intensive intraoperative fluid regimen (normal saline, colloid, mannitol or red blood cells) to achieve a central venous pressure of 10-15 mmHg. Maintenance fluids were administered to achieve high central venous pressure and high urine output over 3 ml/kg/h in the first 48 hours. Immunosuppressive regimen consisted of induction with Basiliximab plus triple therapy (Steroids, Mycophenolate Mofetil and Tacrolimus).

The variables analyzed were renal size (longitudinal length measured by ultrasound in cm), estimated glomerular filtration rate (GFR) (calculated using the Schwartz equation in ml/min/1.73 m2) and proteinuria (using the protein/creatinine ratio in mg/mg), at time of transplant (T0), at the first (T1), second (T2) and fifth year (T5), and at the end of the study (TF). Episodes of rejection, graft and patient survival were also studied. Outcomes in group A and B were compared. Data were analyzed using SPSS v22 (SPSS Inc., Chicago, IL, USA). Categorical data were compared using a Chi-square test, and longitudinal data using independent sample Student t-test. Graft and patient survival was analyzed by actuarial methods. Differences between the Kaplan-Meier survivals curves were tested by log-rank tests. 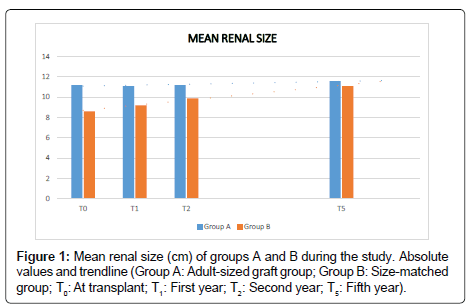 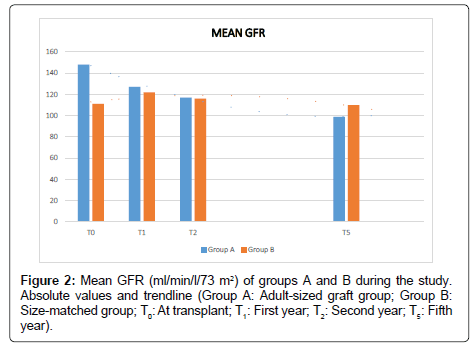 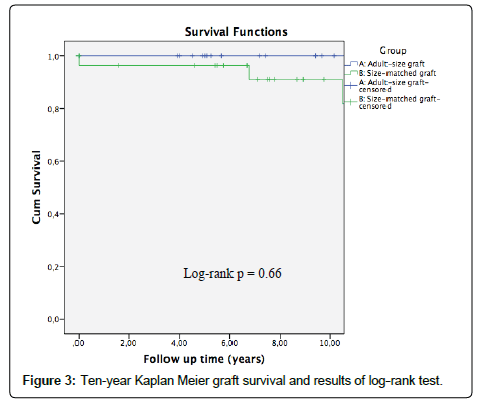 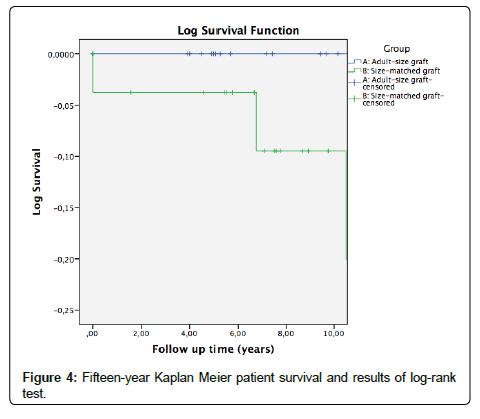 It was previously recommended that pediatric patients with ESRD should receive kidneys from pediatric donors. Some reports suggested that kidneys from adult donors transplanted into children downs regulated filtration and didn’t increased their function according to body growth over years, leading to poorer long-term graft function [10-12]. But the scarcity of size-matched donors with unacceptable long waiting lists had led to dispute these findings with the development of further studies related to this topic.

It has been proven in this study that it is possible and safe to perform renal transplantation using adult-sized grafts in small recipients, with similar long term results to when it is performed with size-matched kidneys. Graft and patient survival rates were similar in both groups. These results are congruent with other similar study of Goldsmith et al. [13], that analyzed short-term outcomes of renal transplantation using adult-sized grafts and size-matched grafts in small recipients. Sarwal et al. [14], also demonstrated that adult-sized kidneys without acute tubular necrosis provide exceedingly superior long-term graft outcomes for infants and small children; they suggest that the increased donor tissue mass confers a protective effect to the patients with a prolonged rejection-free state and enhanced graft survival and function.

In our results it was shown that, despite initial disparity in renal size between groups, there is a trend to converge during the follow up. This is due to an important size increasing of the small kidneys, and maintenance of the size in the large kidneys. There are some studies that asses the growth of small renal grafts after transplantation [12,15,16]. The mechanisms involved in the volume increase of renal graft have yet to be elucidated; although, renal overflow, growth and genetic factors have been implicated [17-19]. However, the maintenance of renal size seen in the adult-sized grafts, with a slight increase at the end of the study, is not evidenced in the literature. By the contrary a few studies have reported a reduction of the volume of adult kidneys when they are transplanted to children [20-22]. These studies showed that relatively large donor kidneys shrink during the process of adaptation to small recipients, as a result of decreased blood flow and hypoperfusion of the renal graft, with consequent irreversible ischemic histological injury in these kidneys. These different findings may be due to short-term outcomes of these studies, meanwhile in our study, the slight increase of the kidneys is shown at the last years of the follow up. Nevertheless, in our study the sample size is smaller compare to some those studies, and there might be slight variations of the renal measure depending of the ultrasound interpreter.

Some studies have described better graft function and increase of the GFR in small children transplanted with pediatric kidneys; meanwhile it has been shown a progressive GFR reduction when using adult kidneys [11,12,22-24]. Similar results have been seen in our study. The mean GFR in the adult-sized graft group showed a reduction during the follow up, while the size-matched graft group presented a significant increase in the first year, decreasing again in the next years, being similar to the beginning at the end of the study. It is possible that the GFR reduction shown in the adult-sized group is due to a hypoperfusion of the graft despite the administration of high volumes of fluids. It has been previously demonstrated that even with a two-fold increase in the aortic blood flow after adult-sized kidney transplantation, post-transplant renal artery blood flow is significantly less than normal renal artery flow [20]. Meanwhile the GFR increase shown in the size-matched group may be due to the increase in the renal mass and the capacity of these grafts to grow explained before.

Even though there were no significant differences in the number of episodes of rejection between both groups, it was lower in group B. As it has been referred before, Giuliani et al. [25], suggests that an increased donor tissue mass confers a protective effect to the patients with a prolonged rejection-free state, that could justify this trend of more rejection in group B.

One limitation of the study was its retrospective and observational methodology with the absence of blinding. However, a randomized, controlled, blinded study would be very difficult to organize and would need a long period time of recruitment of patients. Another limitation was the discordance of the source of the grafts (living donors and cadaveric donors) between groups. Living donor grafts came from healthy adults and received minimal ischemic injury, meanwhile cadaveric grafts suffered from brainstem death, multiorgan extraction and graft storage. These factors may have affected the outcomes. It could be controlled by performing a similar study but including only cadaveric patients in both groups.

The use of adult-sized kidneys in small recipients showed a reduction of the graft function (GFR), but remained a stable size. These grafts can be safely transplanted with comparable outcomes to size matched kidneys.

Copyright: © 2016 Amesty MV, et al. This is an open-access article distributed under the terms of the Creative Commons Attribution License, which permits unrestricted use, distribution, and reproduction in any medium, provided the original author and source are credited.