The active management of the third stage of labor (AMTSL) is effective in reducing the incidence of post-partum hemorrhage (PPH), the duration of the third stage of labor and the need for blood transfusion [1]. Failure of the uterus to contract (uterine atony) is the most common cause of primary PPH, occurring in 70-90% of cases and evidence suggests that correct implementation of AMTSL prevents at least 70% of PPH cases [2,3]. In South Africa, obstetric hemorrhage is a major cause of maternal morbidity and mortality and PPH is a major reversible component [4]. The fact that a high number of PPH cases can be prevented if AMTSL is correctly implemented [1] raises the question about the knowledge and practice of Health Care Professionals (HCPs) with respect to AMTSL; and whether the third stage of labor is managed appropriately.

This was a questionnaire based cross sectional survey of HCPs involved in providing peripartum care. It included doctors (medical interns, medical officers, registrars and specialists), anesthetists, midwives and professional nurses in public health facilities consisting of a tertiary, regional, district hospitals and 3 primary health care clinics. The distribution and collection of questionnaire was done as per Figure 1. 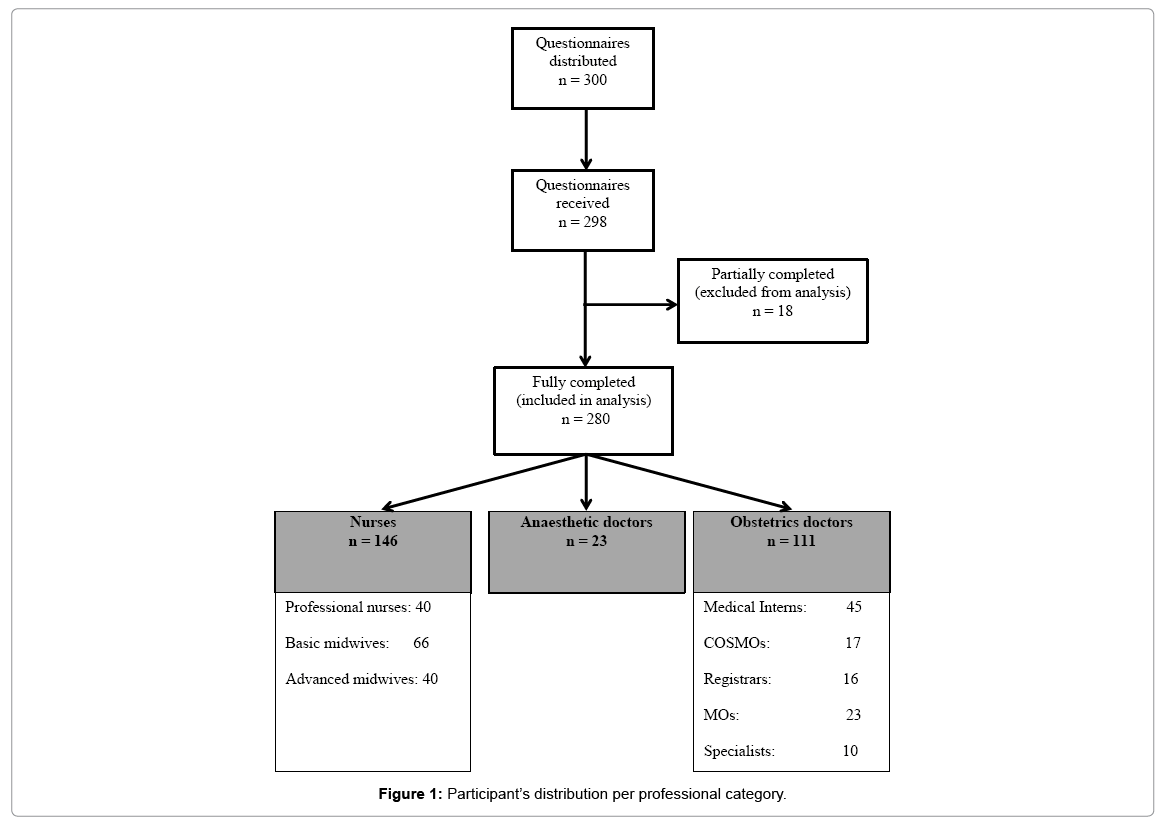 The data collection tool comprised a once-off questionnaire in which HCPs were asked to answer questions regarding AMTSL. Participants were recruited at academic meetings and during working hours. The questionnaire took about 10 min to complete and included demographic data with regard to their professional category and number of years of experience in obstetric care and the facility.

Regulatory permission including ethical and institutional permission (BE 029/14) was obtained.

The data was analyzed using SPSS version 21 and frequency tables and bar graphs were used to summarize data. Cross tabulations and Chi-square tests of association were used to investigate association between various variables. An α=0.05 was statistically significant.

Of the 300 distributed questionnaires, 280 were complete and analysed.

Table 1 presents the distribution of the study participants according the level of healthcare facility, years of experience and professional category.

Table 1: Participants per level of care, professional experience and category.

91.8% of doctors and 92.2% of nurses manage the TSL actively and the majority of HCPs practiced early cord clamping (69.8% of midwives and 73.8% of doctors). Other practices with regard to AMTSL, EMTSL, clamping of the cord, placental delivery and the type and timing of administration of prophylactic uterotonic agents are presented in Table 4.

Table 4: HCPs practice of AMTSL, EMTSL, cord clamping, placental delivery and the use of utertonics.

The association between the frequency of delivering the placenta by controlled cord traction and the nursing category was statistically significant (2=13.8; p=0.03).

The association between the mode of administration of utero-tonic drugs and doctors’ category was statistically significant as well (χ2=22.9; p=0.03).

93.6% of doctors deliver the placenta by controlled cord traction and 56.8% of them clamp the cord within 20 s of the delivery of the baby. 65% use oxytocin as a combination dose of an intravenous bolus and infusion. A bolus dose of 2-3IU after delivery of baby and cord clamping and infusion dose of 17-20IU is usually used. 49.5% of obstetric doctors and 60.9% of anaesthetic doctors administered prophylactic uterotonic drugs after delivery of the baby and cord clamping (Table 5).

The international federation of gynaecologists and obstetricians (FIGO), the international confederation of midwives (ICM) and world health organization (WHO) recommend the routine use of AMTSL for all vaginal births in health facilities [5,6]. Our study revealed that the majority of HCPs practice AMTSL and believe that the intervention is indicated for all patients, not only those who are at risk of having PPH. These findings are similar to that of other studies: Farrar et al. [7] in 2010 found that 93% of obstetricians and 73% of midwives report “always or usually” using AMTSL, while Bombastic et al. [8] in 2010 found that 78% of obstetricians “always or usually” use AMTSL.

With regard to HCP’s knowledge

When assessing the practice of AMTSL

Our study found that the majority of HCPs always or usually manage the TSL actively; this is in keeping with other studies that assessed the practice of AMTSL [7,8].

This study showed that uterotonic agents are utilised by a large proportion of HCPs, including 46.6% of midwives and 42.3% of doctors, who incorrectly thought that the routine administration of uterotonic agent is a part of EMTSL.

Oxytocin was the uterotonic agent of choice for most HCPs and is mainly given after the delivery of the baby and cord clamping, this was in keeping with the findings of Bombastic et al. [8] and differ from Farrar et al. [7] who found in their study in 2010 that IM syntometrine was the most commonly administered uterotonic agent after the delivery of anterior shoulder. However, the preferred route of administration in our study was the IM route, as compared to the IV route in the study of Bombastic et al. [8]

It is well known that administration of the uterotonics is the most important component of AMTSL, it reduces PPH by about 50% if used alone [12]. It is possible that the shortcoming of our HCPs practice of AMTSL is either the dose (which was not assessed in our study), or the timing, or the route of oxytocin administration (recent data favours early versus slow IV) [13]. In South African health facilities oxytocin is the recommended uterotonic agent for the prevention of PPH (10 IU, IMI) after delivery of the baby [14,15]. Most low risk pregnancies are delivered in clinics and many labouring women may not have intravenous lines. This may contribute to the findings that most nurses used IMI oxytocin. Furthermore medical staff shortage and presence of only one attendant during the delivery might contribute to the late oxytocin administration (after the delivery of the baby and cord clamping).

Our study showed that the majority of HCPs practice early cord clamping (within 1 min), the majority of midwives do so within 20 s, while the majority of doctors do so between 20 to 60 s. These finding are similar to those of Farrar et al. [7] and Bombastic et al. [8].

Our study highlighted a discrepancy between the knowledge and practice of AMTSL by our HCPs, where most of them followed the WHO definition of AMTSL (where delayed cord clamping is advised unless immediate resuscitation is needed), but they practice early cord clamping (as recommended by Cochrane/NICE guidelines). While this might not be beneficial to the new born, clamping the cord early theoretically reduces maternal blood loss and this may be the reason for our HCPs practice of early clamping.

The majority of our HCPs deliver the placenta by controlled cord traction, which is similar to the finding of Farrar et al. [7] but contrary to the findings of Bombastic et al. [8].

Our study found that 56.8% of doctors clamp the cord within 20 s of delivery and 98.6% deliver the placenta by controlled cord traction. Most doctors assess the placental bed and the uterine cavity for bleeding after placental delivery. All doctors ensure haemodynamic stability in the operating theatre and recovery room; they check for vaginal bleeding and uterine contractility intra- or post operatively. All of the above mentioned steps are critical to prevent PPH at or post CD.

While the uterotonic agents at the time of CD are predominantly administered by the anaesthetist, we found that the surgeon’s knowledge regarding the type, route and dosage of drug administration are actually similar to what the anaesthetists practise. These findings were similar to Farrar et al. [7] in 2010 who showed that the obstetricians and anaesthetists use of oxytocin at CD was similar.

Oxytocin is the most commonly used prophylactic uterotonic agent at CD by the majority of doctors and is mainly used as combination dose (65.8% obstetric doctors and 87% of anaesthetic doctors). The bolus dose used was mainly 2 to 3 international units (IU) by surgeons and 2 to 2.5 IU by the anaesthetists, while the combination dose was mainly 17 to 20 IU by both. It is usual practice to administer the prophylactic uterotonic drug after delivery of the baby and cord clamping.

Our study found that the bolus oxytocin dose used during CD by the majority of the doctors is half the minimum dose recommended by NICE [18] and practised across most of Europe and Australia [19] and by most obstetricians and anaesthists in UK [20]; where 5-10 IU oxytocin as a slow IV bolus is used. This use of smaller oxytocin bolus dose by our HCPs might be because of the fear of the haemodynamic side effects of oxytocin, such as hypotension, tachycardia, flushing and chest pain. The practice of using a smaller oxytocin bolus dose might be a possible reason for increased bleeding during CD as a result of poor uterine tone, but there is no documented evidence of this. It must however be noted, that the systematic review of oxytocin dosing at caesarean delivery supports slow boluses of 0.3 to 1 IU at elective CD and 3 IU at emergency CD; and both followed by a 5 to 10 IU/h oxytocin infusion, to reduce the risk of PPH while minimizing the adverse effects of oxytocin [21]. Our study also showed that most of HCPs do not use separate intravenous lines for oxytocin infusion at the time of CD.

A possible area that might be deficient and may explain the reason for high incidence of PPH at CD is the dose and timing of oxytocin prophylaxis, (low prophylactic oxytocic drug, late administration of oxytocin, no separate line for oxytocin infusion) and the fact that intravenous infusions are often stopped during transfer of patients out from the operating theatre.

Although there is a deficiency in the knowledge of the HCPs in study sites with regard to AMTSL, the intervention is implemented, with most of the recommended steps used by the majority of HCPs. The most important component of the intervention (administration of uterotonics) is used by a large proportion of HCPs. The only deficient area in knowledge might be the dose or timing (late) of uterotonic administration both after vaginal delivery and in the operating theatre during CD.

Copyright: © 2017 Daef G, et al. This is an open-access article distributed under the terms of the Creative Commons Attribution License, which permits unrestricted use, distribution, and reproduction in any medium, provided the original author and source are credited.