Graphics was a two dimensional notion till the nineteenth century. It was only in the twentieth century, during the modern movement, that graphics emerged as a three dimensional tool. During the same time architecture also had a change in its definition and there was a breakthrough in the design industry. Colour which was earlier used as a superficial element for decoration now started being used as a design element of third dimension in architecture.

Designing with colour therefore it must be considered in all its aspects of which are related to one another, so that virtually in any work in which colour plays a role all must be taken into accent. Colours have a profound effect on mind and emotion and influence our mood and feelings. Colour can reinforce ideas of form and material; express its divisions and proportions.

Colour can underline an architectural statement, it can punctuate, direct and focus attention and compensate in a way unlike any other abstract element”. How graphical use of colour can create a statement in architecture.

Architecture essentially defines and encloses space through the elements of form: the shape size, scale, proportion, colour and texture of which are modulated by the requirements of the enclosed space internally, and the repose to the physical context and environmental factors externally. As long as the outer surface of a building services only a protective device.

‘Graphical’ means something like a graph or a diagram which expresses information through Abstraction. Here graphics is simplification of the information for better communication. There are some words or sentences which cannot be expressed as they do not have a physical form. We can relate to graphics as a tool of visual communication, where degree of communication depends on the degree of abstraction used to express simply [1].

There could be several approaches to the study of colour in architecture. It could focus on the work of a single style or it could be restricted to a region or the use of colour in a particular building type.

Seeing: All objects which come within a cone of vision will be seen. They will form an impression on the retina. The process of seeing is however unconscious and all situations being seen are not necessarily perceived.

Observing: In the process of observation situations are consciously attended to. As mind can attend to only one activity at a time, while observing one cannot simultaneously engage the mind in some other activity. As a result of conscious process of observation an impression of what has been observed may be stored in the memory.

Perceiving: While perceiving one is conscious of visual processes as well as its experience. The process of perceiving initially begins with the process of seeing. If required for any reason the seen condition may then be looked at and observed. The observation may then lead to a perception.

All the visual processes can be summarized this way. When sense organs come into contact with the external condition, if unconsciously, it is seeing and if consciously, it is looking. When sense organs come into contact with characteristics of the external condition, it is still observing. In the process of sensing the information received by eyes is experienced emotionally without relating it to a specific context. In the process of perceiving the information is experienced in specific contexts.

Any external knowledge gained through the media of mind and cognitive organs in close contact of the external object doubtless, real and without any defect of organs is called ‘perception’. Perception is processes by which external conditions are understood with respect to one’s own internal conditions.

When the eyes come in contact with external objects and through the media of the mind, we perceive the environment; this is ‘visual perception’.

According to the theories of visual perception things may look different from what they are. The Understanding of the factors and design attitudes which can make things look different from what they are, can help the designer to express the purpose of his design effectively. Generally we do not analyze what we see although we do recognize that an object has several aspects. Among these aspects are colour, size, pattern, position etc [3].

To make things look real or the way they are needed to be perceived, designer has to consider these factors responsible for the visual perception and using them effectively create the graphic statement for the expression of his idea. Form vocabulary: To design the graphic figure it is first necessary to know what one has to design with–the constructive elements, their capabilities, and their limitations. Casual analysis shows that form derives from five basic elements: point, line, shape, volumetric form, colour, and texture. These elements constitute the form vocabulary available to graphic communication.

Space grammar: Whatever the form of the figure, to exist at all it must exist upon a surface, or picture plane. Physically, the picture plane is simply the page area on which one works; but in the design sense, it functions as a two–dimensional space. The form elements should be designed not only in terms of their individual meanings, but in terms of the spatial order necessary to relate those meanings to one another within a single, coherent image.

Visual language is not an end in itself. Form, space, and visual interaction are simply means through which to visualize ideas. Visualization begins with a definition of purpose. Relevant subject matter is applied to this purpose and translated into a visual concept; usually a sketch form. A design is then constructed, in which a full range of visual language is used to develop and refine the visual concept into a figure model. Concept, design and production are the three basic steps in the making of a graphic statement (Figure 2) [4]. In everyday life the meaning of a thing can vary in relation to the way in which it is seen and understood. the farmer, for example, sees the wheel of his wagon as a physical object. The engineer who designed it sees it as a mechanical problem. The merchant who sold it sees it as a financial profit. Similarly, the subject of the graphic figure can be seen and represented in different ways, depending on its communicative aim. Before a graphic figure is constructed, a “thinking” drawing is necessary to determine its basic framework as a visual idea. This thinking drawing, or sketch, is rudimentary and conceptual in nature.

This visual concept provides a skeleton for the graphic figure. The next step is the design of the figure model which will provide this conceptual skeleton with a functioning body. Form and space are then integrated into a comprehensive design, which serves as a figure model, or working guide for the production of the graphic statement. There are some spatial cues that help to integrate the form and the space. These help the designer to create the graphic statement. They are, size, colour, position, edge overlap transparency, pattern, format and isolation. Out of all these the concentration is on what colour can do as a spatial cue. Apart from the psychological aspects of colour there are some visual aspects too which can be very effective in creating the graphic statement (Figure 3). 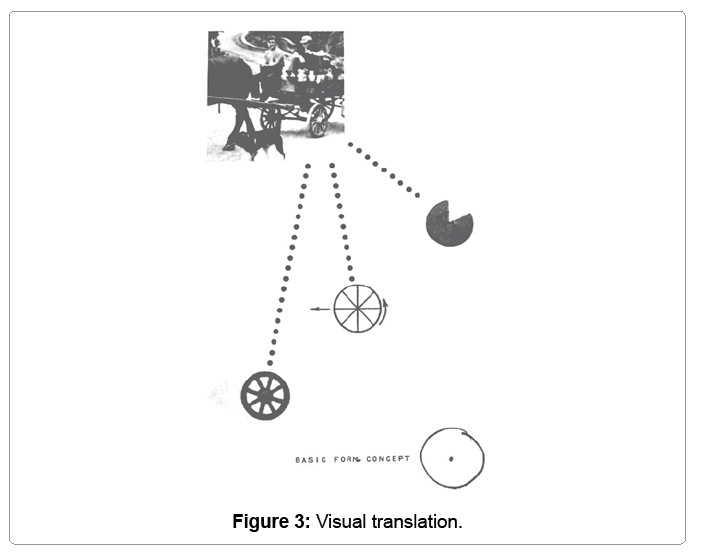 Colour can enhance the visual appearance of the form, destroy the visual continuity of the form, add to the spatial qualities of form, tend to flatten the form, making it seem less three dimensional, give illusions of concave, convex, and negative areas, attract attention, contrast or blend the form with its environment, give illusion of transparency and translucency, create tension or be appealing [5].

Architecture is the designing of a built form. A similar design process is applied here and designing starts with a purpose and a communicative aim. The aim is converted into a visual idea and a relationship of built form and the context is derived by the use of design elements which is in the third dimension. By using graphics the visual idea is made more direct and clear. Colour is one such design element of graphics as seen earlier. In the 19th century, with the intervention of graphics in architecture, colour too was used as a design element to address a design concept instead of an element of decoration only. The study is to understand this transformation of use of colour from two dimensional element of graphics to the three dimensional experience of a space in architecture. For this it is important to know the properties of colour and understand the colour graphics.

Copyright: ©2014 Patel TN. This is an open-access article distributed under the terms of the Creative Commons Attribution License, which permits unrestricted use, distribution, and reproduction in any medium, provided the original author and source are credited.