Analysis of Platelet Count in Patients with Bleeding Gums

Analysis of Platelet Count in Patients with Bleeding Gums

Aim: The aim of this study is to analyze the platelet count of patients with bleeding gums.

Material and methods: 50 patients who reported to Saveetha Dental College with a chief complaint of bleeding gums were assessed for their platelet count to find any relationship of bleeding with platelet count.

Reason: Platelets play an essential role in arresting bleeding and aids in clotting mechanism by formation of platelet plug. Low platelet count known as thrombocytopenia accounts for a poor or slow clotting mechanism. Thrombocytopenia is due to destruction of platelets in the blood stream, spleen or liver. It can also be due to chemotherapy, radiotherapy, due to intake of certain drugs, autoimmune diseases etc. Since the platelets are essential to arrest bleeding, this study is to reveal the alterations of platelet count in patients with bleeding gums.

Results: This study highlights the fact that there is no significant difference in the platelet count in patients with bleeding gums.

Blood in the circulation contains red blood cells, white blood cells, platelets. All the cells circulate the body in blood vessels, each having an important function to perform. Red blood cells contain hemoglobin which is responsible for the supply of oxygen from the lungs to the entire body. White blood cells have an important function in the immune system of the individual. Platelets play an important role in primary hemostasis of wounds and thereby prevent further bleeding. When our body encounters a wound, the endothelium breaks and the collagen in the endothelium comes in contact with the platelets in the circulation. This reaction causes the adhesion of platelets to the affected site. These adhered platelets send a signal for the other circulating to adhere to them. This is called platelet plug which is the aggregation the platelets to the sub endothelial tissues of the wound site. This also helps in initiation of thromboplastic production [1]. This platelet plug formation will in turn activate plasminogen to form plasmin which will in turn bring about secondary hemostasis by following the intrinsic, extrinsic and common pathway of hemostasis.

The study was conducted in clinical pathology lab in Saveetha dental college in Chennai.

50 people were taken for the study.

The study population was selected according to the criteria above and a written consent was taken from them regarding using their blood for our study purposes. Blood samples of about 2 ml was collected from each patient in an EDTA vacutainer tubes and was fed into the 3 part automated coulter counter method and analyzed and only the platelet count was included in the study. A student t test was performed to find out the significance of platelet count among patients with systemic problems. 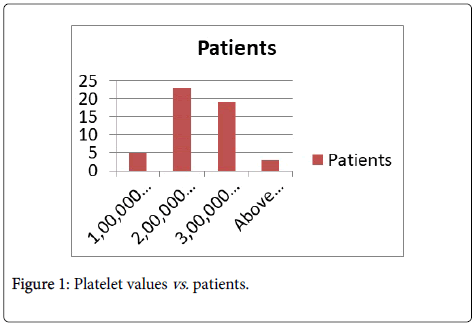 The average count for the female population in this study is 305000 platelets/μl of blood and the average for male population being 294600 platelets/μl of blood (Figure 2). This study also found out that there is no significant differences in the platelet count in patients with systemic diseases like diabetes, hypertension or both using statistical analysis (P<0.01). 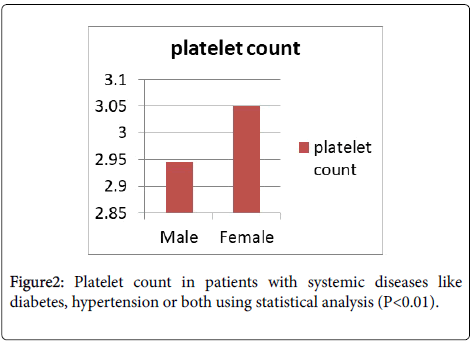 The normal platelet count for an individual being 150000-400000/μl of blood. If the platelet count goes less than 150000/μl of blood, the condition is termed as thrombocytopenia and if the count increases beyond 400000/μl, then it is termed as thrombocytosis. Thrombocytopenia is either a congenital disease or caused due to the intake of certain of certain medications. Some of the signs and symptoms of thrombocytopenia are purpura, rashes, prolonged bleeding from gums or nose, presence of blood in stools and in urine etc. Thrombocytosis is caused due to either hereditary or secondary to some infections like dengue etc. Some of the signs and symptoms of thrombocytosis is usually chest pain, fatigue, weakness, fainting etc. If the count of platelets is less than 20,000 then, there is an increased risk of severe bleeding. Thrombocytopenia is known to cause bleeding gums and frequent cases of acute bleeding may cause increase in platelets. In case of a wound, low platelet count does not allow the clot formation to happen which in turn does not arrest the bleeding. This might be fatal in case of large wounds. Due to the presence of open wound, infection is easily bound to occur. Clinical implications of gum bleeding include heart disease, diabetes, stroke etc. Many researchers believe that inflammation and infection cause during gum bleeding may be responsible for these conditions. This study was done to check the relation between platelets and bleeding gums. From 50 people selected for this study the mean value of the platelet count of patients with age between 10-20, 20-40, 41-60 and more than 60 was 2.81 lakhs/μl, 2.9 lakhs/μl, 2.98 lakhs/μl and 2.755 lakhs/μl, respectively (Figure 3). 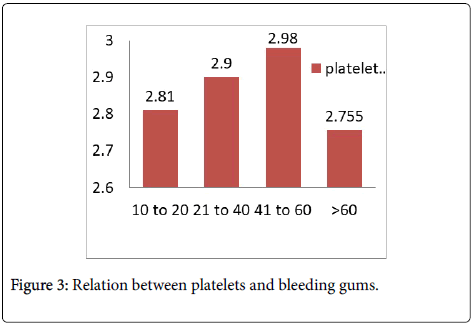 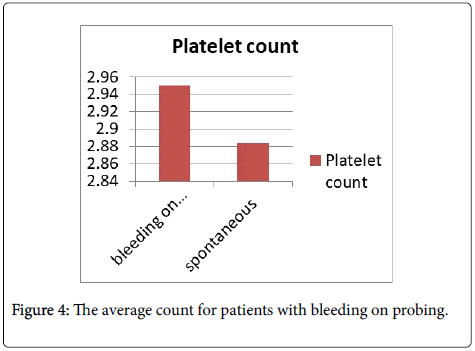 Figure 4: The average count for patients with bleeding on probing. 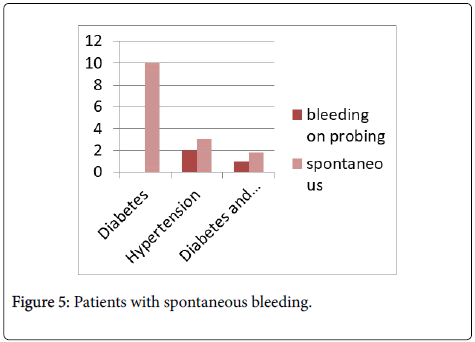 In this study the mean value of the platelet count of patients having diabetes, hypertension and both are 3.02 lakhs/μl, 2.822 lakhs/μl and 3.06 lakhs/μl respectively (Figure 6). 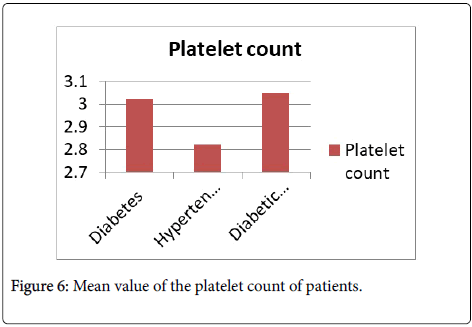 Figure 6: Mean value of the platelet count of patients.

A statistical t test analysis was done comparing platelet count of patients with diabetes and hypertension; hypertension with both and diabetes with both. The P value and standard error obtained are 0.6, 0.43, 0.7, 0.58 and 0.5, 0.54 respectively. There is a greater risk of bleeding at a normal platelet count in elderly patients [2]. A study found out that many other risk factors such as hypertension, diabetes or underlying lesions does not influence the rate of hemorrhage [3]. Another study also stated that low platelet count is a main etiological factor for bleeding gums [4]. This study revealed that there were no significant differences between them, as the P value was not less than 0.01 according to the null's hypothesis. Many studies revealed that there some differences in the concentration of lipids and fatty acids [5-9]. But the evidence present now is not sufficient enough to term that there is a relationship between vascular and metabolic diseases cause the evidence obtained via this study also validates the point mentioned above.

Copyright: ©2017 Srinidhi AK, et al. This is an open-access article distributed under the terms of the Creative Commons Attribution License, which permits unrestricted use, distribution, and reproduction in any medium, provided the original author and source are credited.