This paper mainly discusses the system design and establishes the experimental system which conducts realtime off-axis measurement of the human eye’s aberration. The target is installed in the optical path of human eye objective measuring system. When observing the target, the human eye adjusts itself to a relaxing state so as to conduct measurement. The target being observed conducts movement vertical to optical axis within its field range, and then realized the off-axis aberration measurement. Research data show that only when normal incidence of the light occurs can changes the human eye’s aberration which caused by measuring errors be minimized. Data from all the objects reveal that second order aberration has the largest proportion among all the aberrations and does not show significant change within the increased off-axis angle in the vision field. Third order aberration increases with the increase of off-axis angle in the vision field. Fourth order aberration shows no obvious increase except the first item. High order aberrations for fifth order and above do not change much with the increase in off-axis angle in the field range. Meanwhile, the proportion of fifth order or above aberrations is the smallest among all the objects’ aberrations. The study results demonstrate that it is the aberrations of the former four orders that have a significant affect on human eye. With regard to off-axis aberration, third order and fourth order affect human eye imaging quality significantly. On the contrary, the high order aberrations of fifth order and above have a minor influence on human eye imaging quality.

In early 1990s in Germany, Liang proposed measuring human eye WFA via Hartmann-Shack Sensor (HSS) [8], which has great influence on the visual measurement research. When pursuing his Doctor’s degree in University of Heidelberg, Germany, Liang attempted to measure human eye aberration via HSS in order to improve Ophthalmoscope resolution and succeeded. Liang’s team made some improvement and developed Hartmann-Shack Sensor (15 × 15 mm) composed of two groups of cylindrical mirror array vertically arranged. Such a method has now become the most frequently used technology in measuring eye aberration and has been wide applied to researches in visual science.

The above mentioned measuring methods are all based on on-axis field of view. However, human eye aberration changes caused by off-axis field of view have certain impact on visual imaging [12-16]. Although research [17-21] has been done on aberration characteristics change within large field of view (plus or minus 50 degrees), research within small field of view has never been done. In spite of the fact that generally speaking, human eye has a relatively large view angle that can reach 150 degrees, the clear viewing area is within retina’s macular region, especially fovea centralis of macular region (corresponding angle being 6-8 degrees). The remaining areas have a very low resolution. Therefore, we mainly focus on characteristic changes of human eye WFA when the scope of off-axis field of view increased from 0 degree to 5 degrees and 10 degrees.

HS method is the most widely used approach in measuring human eye WFA. HS Principle is a WFA measuring method firstly proposed by Hartmann and later improved by Shack. The basic principle of Zernike is dividing a complete wave-front into several small areas via lens arra. The irradiating wave-front leaves a series of focal points on the focal plane while passing the lens array [22-26].

WFA’s local slope can be measured by the HSS. Complete WFA can be obtained by restructing algorithm using local slope, which can be presented via Zernike polynomial as follows: 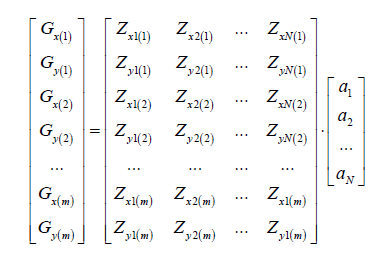 The above equation is shown in matrix form:

Complete wave-front can be achieved by calculate the coefficient vector A of Zernike back to wave-front polynomial expansion. 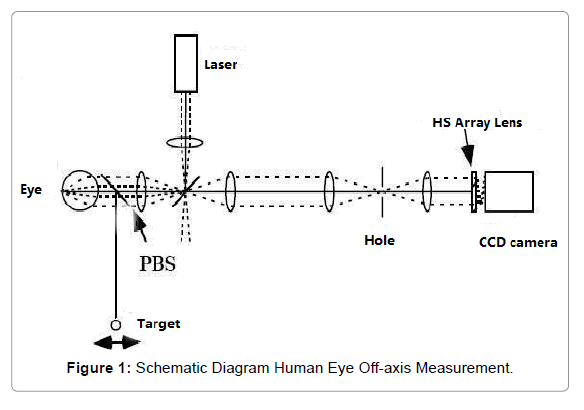 Human eye off-axis WFA is different from the simulated eye. Because it is impossible to fix human eye on the dividing readout panel, off-axis measuring system is set in the measuring optical path, that is, swing the object perpendicular to the direction of the optical axis while the tested eye moving follow with the movement of the object. In the experiment, Figure 2 is set-up according to schematic diagram 1. In living human eye off-axis measurement, several sets of data were measured and 4 sets were randomly drawn for research and analysis. The data are the following: Figure 5: LZY Change of RMS When Left Eye being Off-axis.

2. According to HSS Original Imaging On-axis and Off-axis of Figures 6 and 7, human eye’s imaging quality significantly lowered with the increase of off-axis angles. What’s more, image disk on the left side of the diagram gradually blurs and then disappears. This is mainly because when doing the experiment, human eye moves gradually from right to left, thus the light irradiating into the left side slowly decreases. Visual image caused by light’s reaching retina and passing visual cell is the clearest only when light source is irradiating vertically and the image quality is affected when irradiating aslantly. Also, image quality is sharply lowered because there are fewer photoreceptor cells on retina’s edge. This demonstrates image obtained when irradiating vertically is comparatively uniform with higher quality and lower aberration. With the increase of deviating angles, brightness on each spot on the sensor becomes nonuniform and image quality is lowered. Thus it shows bigger RMS. That is the case with WJJ’s HSS image (Figures 8 and 9). Figure 11: WJJ Change of RMS When Right Eye being Off-axis.

Figure 12: Change of RMS When Right Eye being Off-axis Figure 14: WJJ Change of RMS When Left Eye being Off-axis.

5. It can be concluded from the above data that off-axis aberration (3rd order and above) increases sharply with the increase of offaxis angle within the degrees between 0-10.

6. It should be noted that although normal human eye has a large view angle, the clear observation area of human eye is in retina’s macular area, especially its fovea centralis with the remaining area’s resolution being very low. Therefore, the measurement is carried out in the field of view between 0-10 degrees. It can be observed either in small angle offaxis measurement (Figures 6-9) that human eye’s imaging quality in peripheral field is lowered dramatically with the increase in off-axis angle. Besides the density decrease in photoreceptor cells in peripheral field, the reason for it is because field of view cannot be fully enlarged by off-axis aberration (3rd order and above) caused by light as off-axis equals non-normal incidence.

In addition, because vision is caused by light’s reaching retina and passing visual cells, the picture taken is the clearest only when light source is irradiating vertically while image quality will be seriously affected when irradiating slantly.

This work is supported by State Key Laboratory of Functional Materials for Informatics (SKL201507). It is a team work organized and directed by Professor Xu, Mr. Rao is responsible for the experiment and data processing.

Copyright: © 2016 Ancheng X, et al. This is an open-access article distributed under the terms of the Creative Commons Attribution License, which permits unrestricted use, distribution, and reproduction in any medium, provided the original author and source are credited.