Purpose to objective: To establish the frequency of ALK translocation in lung cancer (adenocarcinomas) at Turkish adenocarcinoma patients level.

Experimental design and methods: Between 2011- 2013, 157 paraffin embedded tumour tissues have been performed by our hospitals. 40 patients chosen from this group were also scanned for EGFR mutations. FISH technique is performed to paraffin embedded tissues were cut 4 micron thick. Vysis ALK Break apart FISH probe kit is used to detect rearrangement of ALK gene. 157 adenocarcinoma tumor tissue were analyzed. In 20 patients (12.7%) were found positive for ALK rearrangements. In our study ALK-positive and-negative patients, there is a difference between the 5.69 percent years. The results of ALK-positive patients compared to negative patients as a result showed that this group are younger patients.

Conclusion: In summary, our study is the first study to investigate the ALK status in lung cancer in Turkish patients. Lung adenocarcinoma patients with ALK translocation, which has been reported to be younger age than carrying wild-type allele. According to result ALK breaks observed more frequently in patients at an early age. FISH analysis is the standard method for detecting ALK rearrangements. ALK gene rearrangements in patients with lung cancer, recent studies conducted on personalized treatment increases the success was observed. ALK gene rearrengements by FISH analysis has a leading role to Crizotinib treatment. Thus, wild type EGFR gene results and ALK gene rearrangements positive patients is related to increased survival after crizotinib treatment. Further studies about ALK gene is important to get more efficient cure result and figure out the molecular mechanism and structure

Lung cancer is the leading cause in the cancer-related deaths in developed countries. More than 99% of lung cancers are adenocarcinomas. Last 10 years, molecular-targeted treatment options in this patient group has increased the survival time. Anaplastic lymphoma kinase (ALK), which is expressed in neuronal cell types encodes a tyrosine kinase. ALK are activated creating a fusion with other genes (EML-4, MET, NPM KIF5B) in lung cancer. ALK translocation results in the constitutive expression of the tyrosine kinase domain of ALK protein, which results in tumor development and growth [1]. The oncogenic dependence of this event is demonstrated on the basis that removal ALK kinase activity reverses the malignant pattern and growth [2]. Recently, results of a phase 1 trial evaluating an ALK inhibitor, Crizotinib, in patients with ALK positive NSCLC demonstrated encouraging results [3]. Treating anti EGFR (tyrosine kinase inhibitor drugs-TKIs) are characterized by resistance ALK positive. To be increased in patients with ALK rearrangement of the ALK kinase inhibitors may be the first treatment option. ALK gene rearrangements in identifying patients are essential for the tyrosine kinase inhibitor that associate with drug resistance and ALK kinase inhibitor suitable for the use of drugs. The aim of this study is to explore the prevalence of ALK positivity in Turkish population lung adenocarcinoma patients by FISH, to better define its clinical features and outcomes.

All included patients had received treatment or consultation from the Acibadem Hospitals. In current clinical trials of the ALK kinase inhibitor crizotinib, FISH is used as the diagnostic test for detecting an ALK rearrangement. This test was recently approved by the FDA. FISH to detect ALK rearrangements was carried out on unstained 4-μm paraffin-embedded sections using FISH using ALK breakapart probes [Vysis LSI ALK (2p23) Dual Color, Break Apart Rearrangement Probe; Abbott Molecular]. Deparaffinised slides were immersed in pretreatment solution for 30 min at 80°C. After cooling, the pepsin solution was applied for 8-10 min at room temperature and then stopped in wash buffer. The ALK probe was heated for 5 min at 75°C and applied overnight at 37°C. Slides were washed with a stringent buffer for 2 min at 72°C, air-dried and counterstained with DAPI.

Two hundred tumour cells were analysed for each case. The number of fluorescent signals within the nuclear boundary of each interphase tumour cell was counted using an Olympus-BX60 fluorescent microscope at ×1000 magnification. Only nuclei with unambiguous signals were scored. Results were analyzed in a fluorescent microscope (Nikon 501) using the Isis Fluorescence imaging system software.The probe hybridizes to band 2p23 on either side of the ALK gene breakpoint. 5’ ALK signal was labeled with Spectrum Green (green), 3’ ALK signal with Spectrum Orange (orange). The normal pattern of the ALK probe was seen as two yellow (or red and green overlapping) signals. The rearrangement was identified by split signals in >25% tumour cells: only one yellow signal was detected and well separated green and red signals were seen. The chromosome 2/ALK polysomy was detected if >2 yellow signals were visible in one nucleus. Admitted to our hospital between 2011-2013, 154 paraffin-embedded tumor tissue of adenocarcinoma patients were studied. EGFR mutation analysis of this group of 40 patients were performed using DNA sequencing methods. 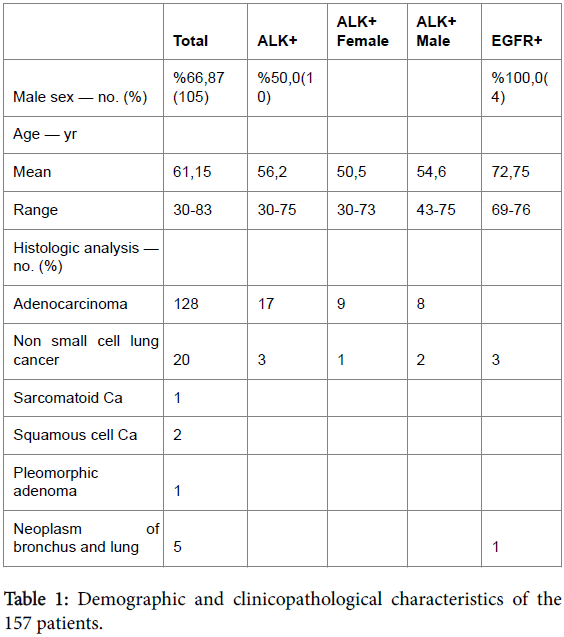 Table 1: Demographic and clinicopathological characteristics of the 157 patients.

Figure 1: Fluorescent in situ hybridization (FISH) reveals a split of red and green probe in an ALK–positive tumor. 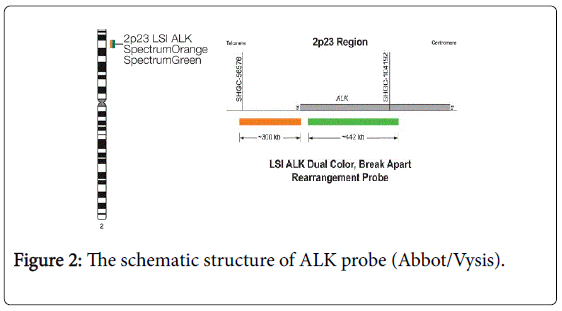 ALK gene rearrangements with recent work done on the trend of personalized medicine in lung cancer is increasing. ALK gene by FISH analysis has taken a leading role in the selection of Crizotinib treatment. In this direction, wild-type EGFR and ALK rearrangement was associated with improved survival in lung adenocarcinoma patients. ALK positive patients tend to be younger than EGFR mutated or wt patients. In our study ALK-positive and-negative patients, there is a difference between the 5.69 percent year. The results of ALKpositive patients compared to negative patients showed that younger patients. The age distribution is between the ages of 30-75. In our series, positivity occurred in 25% to 62% of the cells in ALK-positive tumors. Rearrangements involving ALK gene is an example of oncogenic dependence. ALK positive patients show predominantly an adenocarcinoma histology, younger age at diagnosis. Development of new drugs targeting this alteration led to impressive tumor responses in this subset of patients. Recently, crizotinib, a small molecule which inhibits the tyrosin kinase activity of ALK, has been approved for treating patients with advanced ALK positive [3]. At the same time, a diagnostic molecular FISH test has been approved by Food and Drug Administration for detecting ALK positive patients. Taken together, these two facts, show how important is in the era of target therapies to identify and validate a biomarker for selecting those patients more suitable to achieve a benefit, even since the earliest development. ALK positive patients by FISH represents in our study a 12,7% of the total, which is discordant with publications of other investigators in other population of patients and being the first ALK prevalence report in a cohort of predominantly metastatic Turkish lung cancer patients. An important issue for clinicians is to identify those patients suitable for treatment with crizotinib. FISH analysis is the standard method. However, IHC has been explored by different groups in an attempt of identify a more worldwide suitable method for screening and diagnosis of ALK positive patients. First antibodies, previously used for diagnosis of haemathological malignances, showed have not enough sensitivity to be applied in ALK positive patients [4]. Further studies will be made regarding the ALK gene in lung cancer patients receiving treatment results more effectively and is important in terms of molecular structure elucidation. In an early-phase study of the ALK tyrosine kinase inhibitor (TKI) crizotinib, the objective response rate (ORR) was 56% and the median progression-free survival (PFS) was 10 months [5]. With crizotinib’s recent FDA approval, many ALK-positive patients will benefit from this therapy over the next few years [6]. In the near future many patients in this group, their specific treatment will be determined by tumor genotyping predictable [7-9].

Copyright: ©2016 Atliine EI, et al. This is an open-access article distributed under the terms of the Creative Commons Attribution License, which permits unrestricted use, distribution, and reproduction in any medium, provided the original author and source are credited.