Copyright: © 2015 Patel P, et al. This is an open-access article distributed under the terms of the Creative Commons Attribution License, which permits unrestricted use, distribution, and reproduction in any medium, provided the original author and source are credited.

A novel HPLC method has been developed and validated for the determination of Latanoprost in pharmaceutical ophthalmic formulation for in-vivo and ex-vivo animal studies. The method used a Supelco analytical C18 (250 mm × 4.6 mm i.d., 5 μm particle size) column, under the following chromatography conditions: Isocratic elution, using a mobile phase composed by consisting of acetonitrile as an organic modifier and water of 60:40 (v/v). The mobile phase was delivered at a flow rate of 1 ml/min and the detection was made by Ultraviolet (UV) detector at 210 nm. This method was fully validated and applied to available pharmaceutical product. The limit of detection (LOD) and limit of quantitation (LOQ) for Latanoprost were 0.07 μg/ml and 0.019 μg/ml respectively. The purpose of this method analysis of marketed and developed ophthalmic formulations of Latanoprost. This method can be used for quality control assay of Latanoprost in materials as well as in pharmaceutical formulations.

Latanoprost is a prostaglandin F2α analogue. Its chemical name is Isopropyl-(Z)-7[(1R,2R,3R,5S)3,5-dihydroxy-2-[(3R)-3- hydroxy-5-phenylpentyl]cyclopentyl]-5-heptenoate. In the cornea, to the biologically active Latanoprost eye solution is a medication administered into the eyes to control the progression of glaucoma occular hypertension by reducing intraocular pressure [1]. It is a prostaglandin analogue (more specifically an analogue of prostaglandin F2α that lowers the pressure by increasing the outflow of aqueous fluid from the eyes through the uvealsclearal tract. Latanoprost is an isopropyl ester prodrug, meaning it is inactive until it is hydrolyzed by esterases. The chemical structure is in Figure 1. 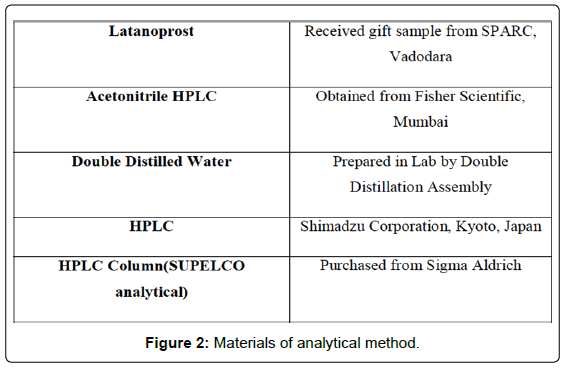 Chromatography was performed on Shimadzu (Shimadzu Corporation, Kyoto, Japan) chromatographic system equipped with Shimadzu LC-20AT pump and Shimadzu SPD-20AV absorbance detector. Samples were injected through a Rheodyne 7725 injector valve with fixed loop at 20 μL. The chromatographic separation was performed using aSupelco analytical C18 (250 mm × 4.6 mm i.d., 5 μm particle size) column [6]. Separation was achieved using a mobile phase consisting of acetonitrile and water of 60:40 (v/v), pumped at a flow rate of 1 ml/min. The eluent was monitored using UV detector at a wavelength of 210 nm. The column was maintained at 25°C and an injection volume of 20 μL was used. The mobile phase was vacuum filtered through 0.22 μm nylon membranefilter followed by degassing in an ultrasonic bath prior to use [7]. Data acquisition and integration was performed using LC solution software (Spincho Biotech, Vadodara).

Aliquots ranging from 1 ml to 10 ml were taken from working standard solution, in 10 ml volumetric flask and diluted to 10 ml with mobile phase to give final concentration of 1, 2, 3, 4, 5, 6, 7, 8, 9, 10 μg/ml. Injections of 20 μl were made for each concentration and chromatographed under the condition described in Table 1 Calibration graph was constructed by plotting peak area versus concentration of Latanoprost and the regression equation was calculated [8-10].

To evaluate LC method robustness, a few parameters were deliberately varied [11]. The parameters included variation of flow rate, percentage of acetonitrile in the mobile phase and acetonitrile of different lots. Robustness of the method was done at three different concentration levels 2.5, 5, 7.5 μg/ml, respectively. Each factor selected (except solvents of different lots) to examine were changed at three levels (-1, 0, 1). One factor at the time was changed to estimate the effect. Thus replicate injections (n=3) of standard solution at three concentration levels were performed under small changes of three chromatographic parameters (factors).

The calibration curves (n=3) constructed for LAT were checked for linearity over the concentration range of 1-10 μg/ml. Peak areas of LAT were plotted versus LAT concentration and linear regression analysis was performed on the resultant curves [12].

The known quantity of the drug substance corresponding to 80, 100, 120% of standard LAT and the mixture were analyzed by the proposed method. At each level of the amounts six determinations were performed. This was done to check the accuracy of the drug at different levels in the formulations [13].

The LOQ and LOD were determined based on a signal-to- noise ratios and were based on analytical responses of 10 and 3 times the background noise respectively. LOD and LOQ were experimentally verified by diluting known concentration of LAT until the average responses were approximately 3 or 10 times the standard deviation of the responses for six replicate determinations.

Three different concentrations of LAT (1, 3, 5 μg/ml) were prepared from sample solution and stored at room temperature for 2 days. They were then injected into HPLC system [14].

To determine the content of LAT in formulations, an accurately weighed amount equivalent to 50 μg of LAT was transferred in to 50 ml volumetric flask, dissolved in 25 ml of acetonitrile :water and volume was made up to the mark with the same solvent. The volumetric flask was sonicated for 2 min for complete dissolution and then filtered. The concentration of LAT in sample stock solution was 1 μg/ml. Then 20 μl of this solution was injected in to column and chromatogram was recorded. The analysis was repeated in triplicate [15].

The method was validated with respect to parameters including Linearity, Limit of Quantitation (LOQ), Limit of Detection (LOD), Precision, Recovery and Selectivity.

Validation of developed HPLC method was carried out as per ICH guidelines Q2 (R1). Table 1 Optimized parameters of HPLC method.

Results, presented in Table 2 indicate that the selected factors remained unaffected by small variation of these parameters. It was also found that acetonitrile of different lots from the same manufacture has no significant influence on the determination.

Insignificant difference in assay (%) and less variability in retention time were observed. Table 2 a Robustness Evaluation. 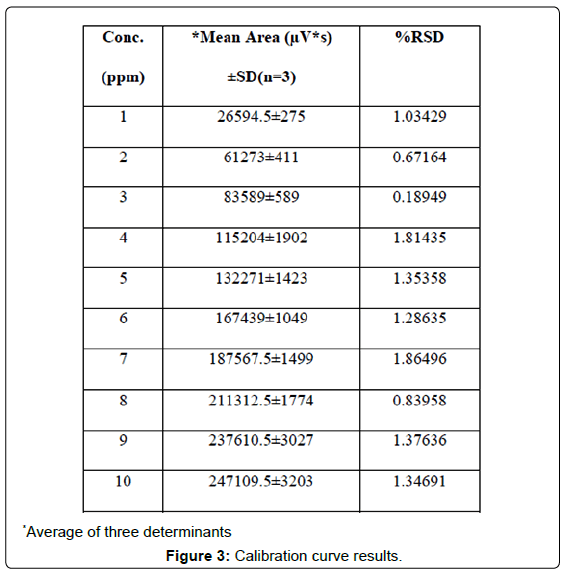 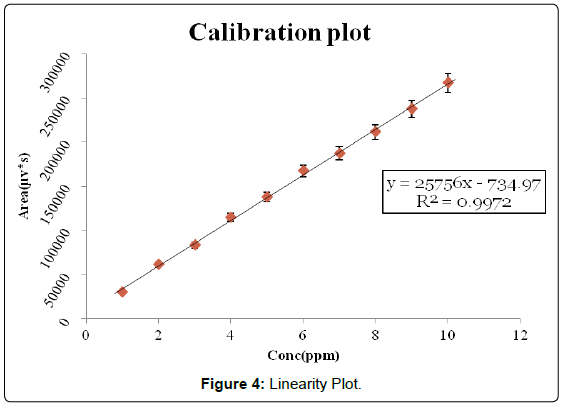 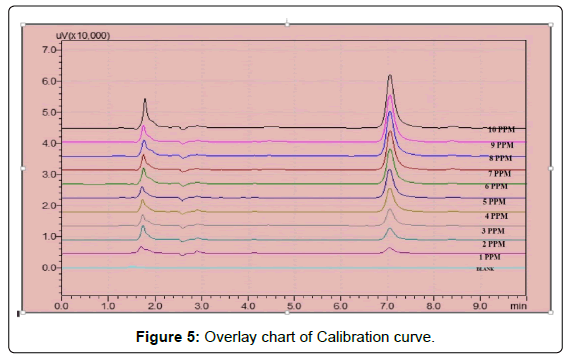 This was done to check the accuracy of the drug at different levels in the formulations (Table 4).

Table 5 shows that for both the cases, % RSD was less than 2% which complies with specified limit.

No additional peak was found in chromatogram indicating the stability of LAT in the sample solution (Table 6).

The validated LC method was successfully applied for the assay of LAT in marketed and developed formulations. Assay results are represented in Table 7.

The experiment was performed by injecting six consecutive injections of solution having concentration of 10 μg/ml during the start of method validation and the start of each day.

Different Peak parameters were observed like retention time, tailing factor, theoretical plates and % RSD of area. These are summarized in Table 8.

Comparative diffusion studies were carried out for F2, F3, F4, F5 and Ch-F4 microemulsions and plain drug solution using the diffusion method for a period of 24 hours and results were compared after applying different kinetic models. The results of in- vitro drug release studies were indicating that after the end of 24 hours study 52.56% of the drug was released from plain drug solution and 66.4%, 68.34%, 83.06%, 69.93% and 90.43% from F2, F3, F4, F5 and Ch-F4 microemulsion, respectively. The results showed that the drug released from plain drug solution was less than half of the drug released from other drug formulations. So, these formulations increased the drug permeation. Ch-F4 showed controlled release than other microemulsions. These are summarized in Figure 6. 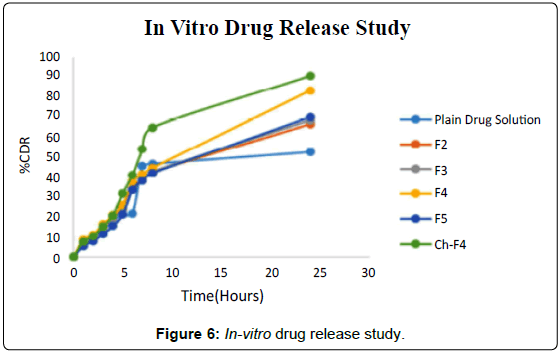 To determine the content of LAT in formulations, an accurately weighed amount equivalent to 50 μg of LAT was transferred in to 50 ml volumetric flask, dissolved in 25 ml of acetonitrile :water and volume was made up to the mark 50 ml with the same solvent. The volumetric flask was sonicated for 2 min for complete dissolution and then filtered. The concentration of LAT in sample stock solution was 1 μg/ml. Then 20 μl of this solution was injected in to column and chromatogram was recorded. The analysis was repeated in triplicate.

The developed HPLC method is very simple and results confirm suitable accuracy, linearity and precision. Therefore, the method could be useful for both routine analytical and quality control assay of Latanoprost in ophthalmic microemulsion and stability studies. 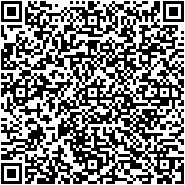