Patients with decompensated liver cirrhosis frequently receive nutritional therapy with a nutrient mixture enriched with BCAA or BCAA nutrients. BCAA supplementation was reported to delay reduction of hepatic reserve in patients with end-stage liver disease [6]. However, the effect on patients undergoing living donor LT (LDLT) is unclear. Moreover, the nutritional status and relationships between nutritional parameters including skeletal muscle mass and zinc in such patients are not well understood.

We recently reported that skeletal muscle mass had a significant negative correlation with BTR and low preoperative skeletal muscle mass to be closely involved with post-transplant mortality [7]. However, neither the impact of both pre-admission BCAA treatment and preoperative levels of nutritional/metabolic parameters on posttransplant outcomes nor the reason of the negative relationship is clear.

The aim of the present study was therefore to examine the characteristics of nutritional status and the impact of pre-admission BCAA treatment on both skeletal muscle mass and nutritional/ metabolic parameter levels in LDLT candidates. Additionally, we assessed relationships among these parameters, especially with skeletal muscle mass and zinc levels, and examined risk factor for bacteremia and early mortality after LT focusing on nutritional factors.

Two hundred and eight adult (age ≥ 18 years) patients underwent primary LDLT at Kyoto University Hospital between February 2008 and August 2012. Excluded from the study were 15 patients with acute liver failure as an indication for LT for the following reasons: First, the pathophysiology and nutritional status is different from patients with other end-stage liver diseases. Second, BCAA supplementation was not suitable for those patients and even regarded as a contraindication [8]. Third, they could not undergo preoperative bioelectrical impedance body composition analysis (BIA) examination due to emergent LT. Next, 64 patients who could not undergo BIA per the dietitians, limitations of dietitians’ manpower or the hospital’s circumstances were further excluded. The study thus comprised 129 patients. There were 63 males and 66 females. The median patient age was 53 years (range, 19-65 years). The study was approved by the Ethics Committee of Kyoto University and conducted in accordance with the Declaration of Helsinki of 1996.

The median Model for End-stage Liver Disease (MELD) score was 19 (range, 4-47). Thirty-seven patients were ABO incompatible, and 92 were identical or compatible. The Child-Pugh classifications were C, B, and A for 78, 42, and 9 patients, respectively. The indications for LT were hepatocellular carcinoma (n=36), followed by hepatocellular diseases such as hepatitis B or C virus-associated liver cirrhosis (n=32), progressive intrahepatic cholestatic diseases including primary biliary cirrhosis and primary sclerosing cholangitis (n=24), biliary atresia after the Kasai procedure (n=8), alcoholic liver cirrhosis (n=7), metabolic liver diseases (n=5), nonalcoholic steatohepatitis (n=4), autoimmune hepatitis (n=3) and other causes (n=10).

Selection criteria for the recipients as well as surgical techniques for recipient operations have been described in detail elsewhere [12,13]. Immunosuppressive treatment usually consisted of tacrolimus or cyclosporine and low-dose steroids as described elsewhere [14,15]. All patients received intravenous antimicrobial prophylaxis with ampicillin (0.5 g) and cefotaxime (0.5 g) twice daily for 3 days starting 30 min before surgery.

Infections were defined using the criteria proposed by the Centers for Disease Control and Prevention and based on reports of liver transplant patients [16]. The isolation of bacteria other than common skin contaminants from a single blood culture in the presence of clinical symptoms or of an infection was considered bacteremia. When caused by common skin contaminants, bacteremia was considered significant only if an organism was isolated from two blood cultures and clinical signs of infection were evident.

Sixty-six patients out of 129 received BCAA treatment before admission to LDLT for a duration of at least a few months, either in the form of 1 to 3 packets of BCAA-enriched nutrient mixture (Aminoleban EN®; Otsuka Pharmaceutical Co., Tokyo, Japan) per day (50-150 g/day), (n=32) or 3 packets of BCAA granules (Livact®; Ajinomoto Pharma Co., Tokyo, Japan) per day (12.45 g/day), (n=34). The other 63 patients did not receive any BCAA supplements before admission. BCAA were introduced at the discretion of the attending physician before referral of a potential recipient for LDLT. After admission to LDLT, all patients received the same perioperative nutritional therapy as described before [7]. 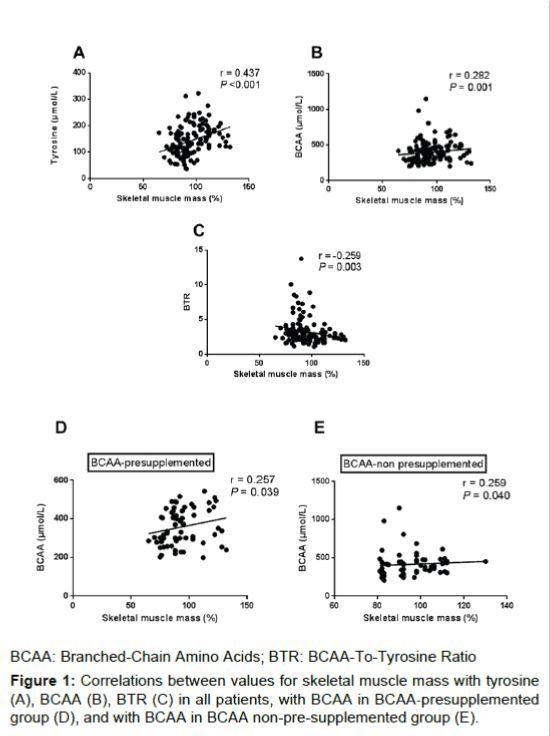 The effect of BCAA treatment before admission to LDLT

The clinical characteristics and surgical variables of the patients in BCAA+ and BCAA- groups on admission were compared in Table 1. There were no significant differences in age, sex, body mass index, Child-Pugh classification, MELD score, etiology of disease, number of ABO-incompatible grafts, donor age, operative blood loss and transfusion units (erythrocyte concentrates).

Table 1: Patient characteristics according to branched chain amino acids treatment given before admission.

Table 2: Levels of nutritional/metabolic parameters and skeletal muscle mass on admission according to pre-admission BCAA supplementation.

As for post-transplant outcomes, incidence of post-transplant bacteremia was significantly lower in BCAA+ than BCAA- group (30% versus 52%, P=0.011). However, the incidence of acute cellular rejection and the mean length of postoperative hospital stay were similar in the two groups (P=0.279, P=0.576, respectively).

Some limitations must be borne in mind when considering this study. First, BCAA were introduced at the discretion of the attending physician before referral of a potential recipient for LDLT. In the present study, however, clinical background including Child-Pugh and MELD scores between both groups were comparable on admission. Therefore, general condition and selection bias might have been at minimum. Second, because of retrospective nature of this study, nutritional status before BCAA administration was unclear and the exact duration and amount of BCAA given within the preoperative nutritional therapy protocol were different patient by patient. Prospective randomized study to examine the effect of pre-admission BCAA treatment is thus needed to adjust these biases. Third, as this was a cross-sectional study, we have not completely verified a causal relationship between BCAA pre-supplementation and parameter levels on admission. Therefore, it will be necessary to perform a future cohort study. Lastly, a limitation was reported for BIA in assessment of body water components of cirrhotic patients with ascites [22]. Fürstenberg et al reported that BIA was highly correlated with other methods in measuring lean body mass even in over-hydrated subjects [23]. Moreover, we recently reported that the effect of over hydration on overestimation of BIA might be, if any, minimum in using this device [24]. At present, therefore, segmental multi-frequency BIA used in this study would be best modality to assess skeletal muscle mass.

In conclusion, BCAA therapy before admission could ameliorate the incidence of post-transplant bacteremia and could enhance improve disease-induced amino acid imbalance or protein status in LDLT candidates. Further randomized clinical trials are warranted to confirm our hypothesis.

Copyright: © 2016 Hammad A, et al. This is an open-access article distributed under the terms of the Creative Commons Attribution License, which permits unrestricted use, distribution, and reproduction in any medium, provided the original author and source are credited.