The present work evaluates the amenability of Chrysophyllum albidium (CA) and Heliotropium indicum (HI) leaves extracts for bioprocess application. The plant extracts were initially characterized to determined their phytochemical constituents; alkaloids, flavonoids, saponins and tannins were found to be present. Proximate analysis and physico-chemical parameters such as pH, density, viscosity and solubility were evaluated and discussed. Degree of solubility of extracts increase with increased in temperature from 30°C-60°C which indicates the water absorption characteristic of plant extracts while organic solvent (ethanol and acetone) gives higher values of solubility as compared to distilled water. The rheological and biodegradability of extracts were studied, CA showed a shear-thickening behaviour while HI gives a shear-thinning behaviour, rapid biodegradation occurs in the formulated plant extracts during OECD marine BOD tests. FTIR analyses were used to characterize the bio-active compounds present in the leaves extracts.

A more bio-based economy offers hope for developed and developing countries, there is a world-wide growing appreciation that the management and utilization of natural resources need to improve [1]. Plants are available in nature and considered as the most natural of all the other natural things. They are attracted to the scientific communities due to their environmental benefits in areas such as household products, environmental clean-up, food processing and health [2,3].

Due to its natural origins, Plant offers a new paradigm for bioprocess industry to develop new products, substantially reduced processing costs, environmental impacts and open new markets for bio-based materials. They leads the way in cross-disciplinary research and thereby becoming indispensable because of advancement in green chemistry [1] and molecular biological studies so as to ensure maximum benefits with the least risk [4].

Most countries in West Africa especially Nigeria are richly blessed with forests and luxuriant pastures, among which contain plant origin with bioactive and antioxidative capacities. Chrysophyllum albidium and Heliotropium indicum are the most popular plants, their natural occurrence have been reported in diverse zones in Nigeria but has not been maximally utilized. Chrysophyllum albidium (African star apple) plant is a forest tree widely known for its fleshy pulp of the fruits while the popularity of Heliotropium indicum also known as Cock’s comb is one of the most popular leguminous plants and vegetables used as spice because of the distinct, pleasant aroma it releases during cooking formulations in Northern Nigeria. Most of the compounds extracted from these plants are widely used in traditional applications such as household formulations and herbs.

The aim of this research work is to characterize the extracts of Chrysophyllum albidium and Heliotropium indicum leaves, and to further determine the physico-chemical and rheological properties of the bioactive extracted compounds of the leaves.

Aerial parts of plant comprising of the leaves, stem and flowers were collected and identified as Chrysophyllum albidium (Family: Sapotaceae) and Heliotropium indicum (Family: Boraginaceae) respectively at the herbarium unit, Department of Biological Sciences, Ahmadu Bello University, Zaria, Nigeria. The leaves were carefully removed from its plant; washed, air-dried under shade for seven days, pestled and pulverized into fine powder before stored in a closed container at room temperature for further use.

Aqueous extracts of Chrysophyllum albidium (CA) and Heliotropium indicum (HI) leaves were extracted using solvent extraction method, while BDH analytical grade of ethanol was used as solvent in the Soxhlet apparatus, consist of a round bottom flask, thimble, extraction chamber, condenser and siphon arm. Concentrate using vacuum rotary evaporator. The percentage yield was estimated with reference to the weight of the ground leaves (eq. 1).

Physicochemical parameters of crude extracts were determined in accordance with the standard methods of Analytical Chemists [10] as follows 0.5 g of extracts was dissolved in 50ml of distilled water; colour and odour using sight and smelling techniques, pH using calibrated digital pH meter (Model pHS-25), and density using pycnometer. Also, viscosity and solubility was evaluated using the methods of non- Newtonian fluid [11] while solubility as described by [12]. Also, Biodegradation tests of crude extracts were carried out using closed bottle (oxygen demand) tests adopting the Azide modification of the Winkler method in accordance with OECD 306 Marine BOD [13] while FTIR analysis was used to identify the functional groups present in the crude extracts in preparation with KBr salt described by [12].

Table 1: % yield of extracts of the plants.

The results of the phytochemical screening of CA and HI plants extracts are presented using Tables 2 and 3. From the results obtained, the investigations into the qualitative phytochemical of the plant leaves extract showed the presence of active phytochemicals constituents while Chrysophyllum albidium showed the presence of tripenes and Heliotropium indicum for steroids only. Although, the presence of these secondary metabolites are the basic of physiological activity and all tested extracts exhibited physiological bioactive properties [15]. This supports its continual uses as household formulations and herbs [8].

Table 2: The results of phytochemicals screening of extracts of the CA leaves.

Table 3: The results of phytochemicals screening of extracts of the HI leaves.

Also, the investigation into the proximate analysis of CA and HI leaves is shown in Table 4. The results shows that CA and HI contained varied contains varied percentage amount of nutrient compositions that are of commercial interest and will support better utilization in domestic industries. Carbohydrate has the highest value while moisture has the least value for the plants employed in this study. Although, the high ash content of Chrysophyllum albidium (CA) indicates that the leaves is rich in mineral elements while the low moisture content in Heliotropium indicum (HI) would hinder the growth of microorganism and promotes storage life.

Table 4: The results of the proximate analysis of the leaves of the plants.

The investigations into the physicochemical properties are summarized using Table 5. Chrysophyllum albidium (CA) has average pH value of 5.67 while 6.31 was recorded for Heliotropium indicum (HI) which indicates a slightly acidic nature of the extracts; the former has a pale-yellow in colour with a pleasant odour and solid appearance while the latter showed greenish-brown colour with an honey odour with semi-solid in appearance. CA has higher average density value of 1.14 compared to 1.08 recorded for HI. This slight difference in density might be due to bio-extracts appearance which tends to affects some of its physical properties such as weight which has a greater tendency on density.

The obtained values of the investigation into the kinematic viscosity of bio-extracts shows that CA is highly viscous with average value of 1504 mPa·s compared to 302 mPa·s recorded for HI crude extracts, this indicates that it takes longer time for CA extracts to flow under same gravity through the calibrated spindle (orifice) of the automated digital viscometer (Model: KVDV-1) at room temperature. Also, from the recorded values of solubility, it is evident that the solubility of the plant extracts in distilled water increases with increase in temperature. This is an indication of the water absorption characteristic of plant extracts as a result of increased degree of solvent-molecule interaction. However, CA is very slightly soluble in distilled water (0.51%) but soluble in ethanol (5.95%) and acetone (4.71%) while HI is freely soluble in distilled water (10.32%) but soluble in ethanol (9.26%) and acetone (9.01%) at room temperature. The measured solubility of the plant extracts in various solvents can be explained as follow. As a rule, polar compounds are soluble in polar solvents while non-polar compounds are soluble in non-polar solvents. Although, water is a universal solvent, its ability to dissolve polar compounds has been strongly established and is attributed to its high dielectric constant. Ethanol and acetone are organic solvent. However, ethanol can ionize to produce hydroxyl ion (OH-). Consequently, the dielectric constant of ethanol is relatively higher than acetone; therefore ethanol is able to dissolve the plant extracts to some extent [12].

An important mechanical property of fluids is viscosity, which is the basic consideration in food industry such as pasteurization, evaporation, drying and aseptic processing. After, the rheological study of the bio-extracts from 30°C-55°C (Figure 1), it was found that the CA and HI are not ideally viscous; the internal flow resistance of the extracts is dependent on the external force which is acting upon the fluid changes with temperature (Figure 1). CA crude extract showed increasing trend of viscosity from 1833 mPa·s (40°C) up to 4501 mPa·s (55°C) which indicates a shear- thickening behaviour, while HI extracts showed decreasing trend of viscosity from 377 mPa·s (40°C ) down to 347 mPa·s (55°C) and indicates shear- thinning behaviour [16,17]. Chrysophyllum albidium crude extract show its ability to give structure by the formation of gel during heating and cooling without breaking the structure. 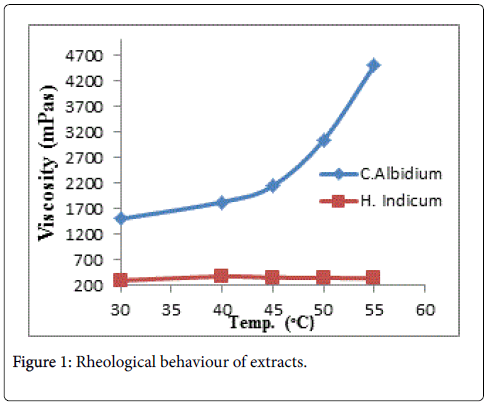 The Biochemical Oxygen Demand (BOD) investigations gave a general clear trend of decrease in oxygen level reduced with increased in incubation time indicating that biodegradation occurs in formulated plant extracts (Figure 2). CA and HI extracts indicates rapid degradability as oxygen level were found to be 2 ppm and 1 ppm values after 28 days, therefore are not toxic to plant and animal, micro and macro organisms. This is consistent with the European Centre for Ecotoxicology and Toxicology of Chemicals (ECETOC) statement that a chemical that is readily biodegradable in fresh will also be degradable in marine environments [18]. 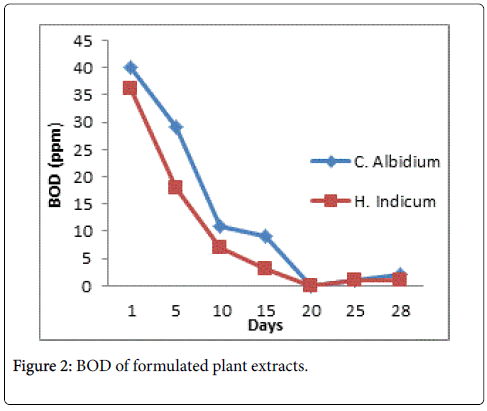 Figure 3: The IR spectrum of CA. Figure 4: The IR spectrum of HI.

This work encompasses biochemical characterization of extracts obtained from African Star Apple (Chrysophyllum albidium) and Cock’s Comb (Heliotropium indicum) plants; from the results and discussions the following conclusions were made:

Based on the extractable components the leaves can be classified as high yielding. Their colour and odour are agreeable. None of the extracts had offensive odour.

The polar extracts of Chrysophyllum albidium and Heliotropium indicum leaves can serve as viable source for bioprocess applications as indicated by the presence of secondary metabolites and FTIR peaks.

Chrysophyllum albidium leaves possess immense potential to act in context of food systems and excipient. Further work on its rheological properties can be explored.

Oral consumptions of Chrysophyllum albidium and Heliotropium indicum leaves cannot lead to any health hazards as shown by its rapid biodegradation.

Copyright: ©2016 Malomo OE, et al. This is an open-access article distributed under the terms of the Creative Commons Attribution License, which permits unrestricted use, distribution, and reproduction in any medium, provided the original author and source are credited.