Clinical, Etiological and Neuroimaging Profile of Pediatric Stroke at a Tertiary Care Center

Clinical, Etiological and Neuroimaging Profile of Pediatric Stroke at a Tertiary Care Center

Introduction: Stroke, defined as the sudden occlusion or rupture of cerebral arteries or veins resulting in focal cerebral damage or neurological deficits in children, differs in clinical presentation, etiology and neuroimaging from adults.

Material and Methods: This hospital based observational study aimed to assess the clinical etiological patterns and neuroimaging profile of childhood stroke evaluated 75 pediatric stroke patients between the ages of 6 months to 18 years.

Conclusion: Even after many decades of initial studies, not much information is available on this aspect in India. Adequate identification and determination of etiology is absolutely necessary as stroke can be prevented in some children and treated in others. With the help of newer diagnostic facilities, probability of finding an etiology of stroke is increased for infectious and non-infectious causes.

Stroke, a diagnosis considered commonly in adults and elderly, is now being diagnosed frequently in pediatric patients also [1]. Definition of adult stroke as an acute onset neurological sign or symptom attributable to focal brain infarction or hemorrhage is applicable in children as well [2,3]. Ischemic stroke incidence is estimated 1.0 to 2.0 in 100 000 children (nonneonates) annually in developed countries. Incidence differs by age and sex; highest in infants and children <5 years of age and higher in boys than girls. Higher incidence is reported in Black and Asian children than white children [4].

Accurate and timely diagnosis is often challenging and stroke is correctly diagnosed only in ≈60% of children, giving ≈40% of cases an incorrect initial diagnosis [6]. This suggests a need to develop programs of education to improve knowledge and skills, bedside clinical assessment methods and better imaging techniques for diagnosis of pediatric stroke in children with improved sensitivity and specificity and to identify modifiable stroke risk factors for preventive strategies. There is limited understanding of pathogenesis, and approximately one-quarter to one-third of all childhood strokes remain ‘idiopathic’ [7]. Also, Risk factors and causes of Pediatric stroke differ as chronic diseases such as atherosclerosis, hypertension, hypercholesteremia/ hyperlipidemia, diabetes, and smoking are more common in adults.

This hospital based, observational study aimed to assess the socioclinical and etiological patterns and neuroimaging profiles of childhood stroke was conducted at Department of Pediatrics, S.M.S. Medical College Jaipur (Rajasthan) from June 2019 to December 2019, after getting requisite clearance from institutional ethics committee. Sample size is calculated at 95% confidence level, alpha error of 0.05, at 10% absolute available error in the above mention clinical manifestation, the required sample size was 75 cases. Patients between the age group of 6 months to 18 years admitted with signs and symptoms suggestive of stroke (hemiparesis, fever, seizure, altered consciousness, etc.,) and later diagnosed as stroke by radio-imaging during the study period were included in the study. Those refusing for consent, presenting with paraplegia/paraparesis, spinal cord/brain trauma and children less than 6 months of age were excluded. 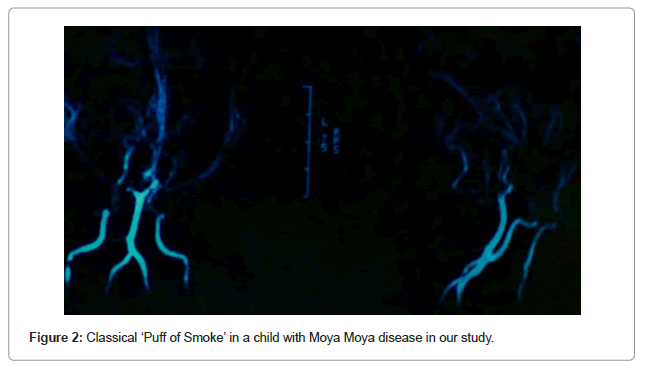 Figure 2: Classical ‘Puff of Smoke’ in a child with Moya Moya disease in our study.

Seizures were noted in 57.3% (n=43) children, seizure patterns and level of consciousness have been depicted in Table 2.

Table 2: Seizures pattern and level of consciousness in patients having stroke.

The most common clinical presentation of childhood stroke was hemiplegia followed by seizure, altered consciousness, fever, cranial nerve palsy, aphasia and vomiting, in our study. Clinical presentation depends on age and type of stroke. The most common symptoms include hemiparesis and hemi facial weakness in 67% to 90%, speech or language disturbance in 20% to 50%, vision disturbance in 10% to 15%, and ataxia in 8% to 10%. Children present with non-localizing symptoms such as headache in 20% to 50% and altered mental status in 17% to 38%. Seizures at stroke onset are more common in children than adults, affecting 15% to 25%, especially in those <6 years of age [4,12,13]. Study conducted by Dr. Shri Ganesh Patil found hemiparesis (28 cases [84.84%]), followed, respectively, by seizure (19 cases [54.54%]), altered consciousness (17 cases [51.51%]), both fever and cranial nerve palsy (15 cases [45.45%] each), and finally speech abnormality [10].

In our study, AIS was diagnosed in 32 (42.6%) males and 27 (29.2%) females. CSVT diagnosed in 8 males and 1 female and Hemorrhagic in 3 males and 1 female. Others causes were noted in 5 males and 3 females. Based on recent advancements in MRI and radio-imaging, we can diagnose stroke in early stages which help clinicians to prevent long term morbidity and mortality in patients. AIS resulting from cardiac disease affect younger children, with a median age of 6 months to 3 years [14]. Braun, et al. noted that, cardioembolic stroke may present with abrupt onset in contrast to fluctuating presentation of stroke caused by arteriopathy [15]. A 7-year single-center cohort study included 54 children with Moya Moya arteriopathy (median age at diagnosis, 7.5 years), and depicted TIAs in 70% and acute AIS in 48% [16]. Study conducted by IPSS found that Focal features, in particular hemiparesis were the most common presenting features of arterial ischemic stroke and hemiparesis was the most common presenting feature of pediatric stroke [17].

Posterior circulation (vertebral artery and its branches) stroke affects previously healthy, mostly male (67% to 77%) children at a median age of 7 to 8 years. Presenting signs and symptoms are hemiparesis, ataxia, dysarthria, visual field deficits, and oculomotor deficits. Nonlocalizing symptoms like headache, vomiting, and altered mental status occur in 60% to 70%. Vertebral Artery (VA) dissection is the most common underlying cause (25%-50%) [19].

The current study has provided valuable information about clinic- etiological profile of pediatric stroke. Early childhood is the most common period for stroke, males are affected more predominantly. CNS infection was found the most common cause of stroke, CNS T.B being the most common. Hemiplegia was the most common presentation of stroke and AIS being most common type of stroke. Causes of stroke in children are varied and differ from those seen in adults. One or more risk factors can be identified in up to three fourths of children with ischemic stroke and an even greater percentage in children with hemorrhagic stroke. Even after many decades of initial studies on etiology and outcome of stroke in pediatric population not much information is available on this aspect in India. Adequate identification and determination of etiology is absolutely necessary as stroke can be prevented in some children and treated in others.

Many patients of stroke completely recovered. With the help of newer diagnostic facilities, probability of finding an etiology of stroke is increased for infectious and non-infectious causes. Neuroimaging has the most important role. Newer modalities of treatment increased chances of recovery many folds from previous times. We suggest prompt identification of stroke and early diagnosis and prompt treatment in stroke to prevent long term morbidity and mortality also.

Copyright: © 2021 Kumar A, et al. This is an open-access article distributed under the terms of the Creative Commons Attribution License, which permits unrestricted use, distribution, and reproduction in any medium, provided the original author and source are credited.