Objectives: The aim of this study is to review the response rate and survival outcomes of patients with stage IV melanoma treated with pembrolizumab in our center.

Methods: Patients with pathologically confirmed metastatic melanoma referred to our center from 2015 to 2017 and treated with pembrolizumab were included in this study. Follow-up consisted of clinical evaluation and FDGPET scans every 3-months. The primary outcome was the response rate of pembrolizumab. Secondary outcomes included Overall Survival (OS), Progression-Free Survival (PFS), and adverse events of pembrolizumab. Long term outcomes of patients attaining complete response for which pembrolizumab was discontinued were also analyzed. Kaplan-Meier and log-rank tests were used to calculate OS and PFS.

Results: A total of 23 patients were included in the study; 7 patients had a BRAF mutation, 16 patients received The median number of pembrolizumab cycles to achieve a Complete Response (CR) was 11 cycles. Median OS and PFS were 60 months and 28 months, respectively, with a median follow-up of 27 months. At the time of data collection, 16 patients were alive and 11 of them disease free. Grade 3 and 4 adverse events occurred in less than 13% of the patients. There were no reported pembrolizumab adverse events leading to death.

Conclusion: Our results confirmed the previously reported high response rates and complete responses of pembrolizumab in patients with metastatic melanoma. Patients with CR in whom treatment was discontinued remained disease-free for the duration of our follow-up.

Melanoma represents the 8th most common cancer in Canada with an incidence of 7800 new cases per year and 1300 deaths annually nationwide [1]. Historically, the 10-year survival rate of locally advanced unresectable and stage IV melanoma patients treated with chemotherapy was 10% [2]. Recent advances with immunotherapy and targeted therapy have significantly changed the survival prognosis of these patients [3- 11]. In 2015, Health Canada approved the use of immune checkpoint inhibitors pembrolizumab and nivolumab in patients with advanced melanoma. Both pembrolizumab and nivolumab are anti-Programmed Cell Death 1 (PD-1 inhibitor) agents that have now commonly been used as adjuvant treatment in stage III and as first and second line treatment in stage IV melanoma patients.

PD-1 is a checkpoint protein located on T-cell lymphocytes. The binding of the receptor PD-1 with its ligand (PD-L1) reduces the T-cells function, hence the host immune response. The mechanism of action of anti-PD-1 monoclonal antibodies consists of blocking the PD-1 receptor, preventing it from binding to its ligand. This prevents the inactivation of T-cells lymphocytes, allowing the host natural immune system to recognize and respond to melanocytic tumor cells. Multiple trials have demonstrated the efficacy of anti-PD-1 agents in the treatment of metastatic melanoma [9-11]. The randomized controlled trial KEYNOTE-002 was a phase II trial on pembrolizumab as second- line treatment for metastatic melanoma patients, after progression on ipilimumab or anti-BRAF +/- anti-MEK targeted therapy [9]. The 6-month Progression Free Survival (PFS) was 34% in the pembrolizumab group compared to 16% in the chemotherapy group. The KEYNOTE-006 randomized phase III trial compared pembrolizumab to ipilimumab, in ipilimumab naïve advanced melanoma patients [11]. Patients could have received one systemic treatment prior to randomization. Treatment with pembrolizumab was given for 24 months or until complete response as per RECIST v1.1 after a minimum of 6 months of treatment [12]. Median Overall Survival (OS) with pembrolizumab versus ipilimumab were 32.7 and 15 months, respectively. Additionally, median PFS was longer in the pembrolizumab group (8.4 months) compared to the ipilimumab group (3.4 months). Objective response rate reached 37% in the pembrolizumab groups compared to 13% in the ipilimumab group. In the complete response group, patients who stopped the treatment after at least 6 months of pembrolizumab had a similar 2-year PFS when compared to patients who continued treatment for two years (86% vs. 85%). These results supported the use of pembrolizumab as first-line treatment in patients with advanced melanoma.

The aim of this study is to provide real world data and analyze the response rates of pembrolizumab in our advanced melanoma patients. Secondarily, we also wanted to determine if patients achieving CR had a sustained response following discontinuation of pembrolizumab.

Between December 1st, 2015 and December 1st, 2017, patients with unresectable locally advanced and stage IV metastatic cutaneous melanoma referred to Maisonneuve-Rosemont hospital and treated with pembrolizumab were enrolled in this retrospective cohort study. Approval of the ethics committee was obtained prior to file review. Patients had to be 18 years or older with histologically confirmed cutaneous melanoma. Patients were excluded of the study if they had any other concomitant cancer within five years of the melanoma diagnosis. Metastatic lesions were identified and diagnosed on imaging (CT scan or TEP scan). Patients who presented with synchronous distant metastases at the time of initial diagnosis and those who developed metastatic disease after treatment of their primary melanoma were both included. Patients could have received prior systemic therapy or local therapy to be enrolled in this study.

At the time of this study, the combination of nivolumab and ipilimumab for metastatic melanoma was not available, explaining why our cohort of patients received the single agent pembrolizumab. All patients received pembrolizumab at a dose of 2 mg/kg administered intravenously once every 3 weeks. Treatment was pursued until complete radiological response, progression of disease, severe adverse events or if the patient declined further treatment. Multiple clinicopathologic variables were collected on the primary melanoma specimen after surgical excision. Patients who received systemic treatment such as adjuvant interferon, other immunotherapy (ipilimumab, nivolumab), targeted therapy or chemotherapy prior to pembrolizumab were also included and documented. Patients were followed clinically every 3 weeks for planning and administration of pembrolizumab and imaging with full body FDG-PET scan was performed every 2-3 months. In the event of a complete response on imaging, pembrolizumab was continued until two consecutive FDG-PET scan showed no signs of hyper metabolic activity. After completion of pembrolizumab treatment, follow-up was continued every 3 months with clinical examination and imaging. Tumor response was assessed by the investigators using the Positron Emission Tomography Response Evaluation Criteria in Solid Tumors (PERCIST 1.0) [13]. The PERCIST criteria for tumor response were reported as Complete Metabolic Response (CMR), Partial Metabolic Response (PMR), Progressive Metabolic Disease (PMD) and Stable Disease (SD). Toxicity was assessed by collecting adverse event data during the treatment period and up to 30 days following the last treatment. The National Cancer Institute Common Terminology Criteria for Adverse Events (CTCAE), version 5.0 was used to grade the severity of all adverse events [14].

From 2015 to 2017, a total of 23 patients with unresectable locally advanced or stage IV metastatic cutaneous melanoma were treated with pembrolizumab at Maisonneuve-Rosemont Hospital. The median age at presentation of the primary melanoma was 64 years old. Male to female ratio was 2:1. Median Breslow score was 2.5 mm (range 0.2-90 mm). Seven patients (30%) harbored a BRAF V600E mutation. At initial presentation, 17% (n=4) of patients had a stage I disease, 22% (n=5) had stage II disease, 35% (n=8) had stage III disease, and 9% (n=2) had stage IV disease (Table 1). The median disease-free interval between the initial treatment of the primary melanoma and the development of distant metastases was 25 months. About half of patients (52%) developed lymph node metastases. In this subgroup of patients, 17% had regional lymph node metastases that were considered unresectable and 83% of patients had lymph nodes metastases as well as concurrent distant metastases. Common sites of metastatic disease included the lungs (48%), skin/subcutaneous (44%), bone (35%), liver (30%), brain (17%) and peritoneum (17%). Less common sites of metastases included the parotid gland (4%), the adrenal grand (4%), the spleen (9%) and the heart (9%).

The median follow-up in this cohort of patients was 27 months (range 6-46 months). Our patients with metastatic melanoma treated with pembrolizumab showed a median OS of 60 months (95% CI: 49.9-182.0). The one, three and 5-yr OS were estimated at 100%, 96% and 77%, respectively (Figure 1). The median PFS was of 29 months (95% CI: 2.8-55.2), with a one and 3-yr PFS estimated at 61% and 45%, respectively (Figure 2). Sixteen patients (70%) were alive at the time of analysis. Progression of disease was the most common cause of death. Amongst those patients, cerebral compression or hemorrhage due to brain metastases represented the most common cause of death. All 11 patients (48%) who achieved a complete response maintained their response and remained disease-free. 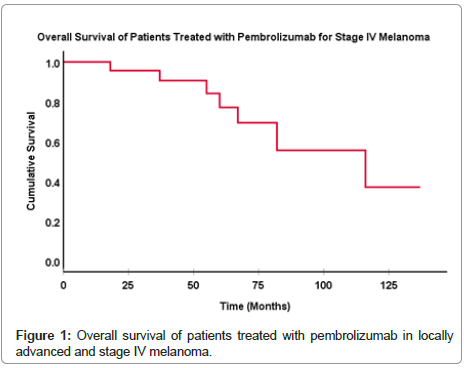 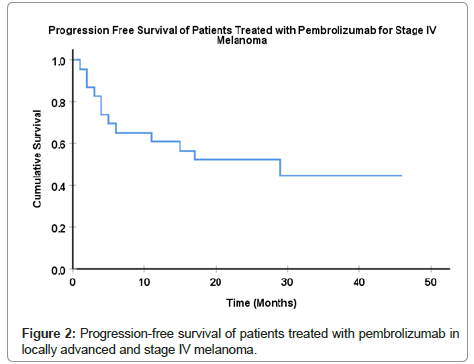 In our cohort of 23 patients, 65% (n=15) of patients experienced adverse events. The most common adverse events were fatigue (22%), pruritus (26%), isolated hypothyroidism (17%), diarrhea (17%), and persistent cough (17%). Two patients reported cutaneous rashes (8%) and one patient presented nausea (4%), all of which were identified as grade 1 or 2 adverse events. Overall, grade 3 and 4 adverse events occurred in 3 patients (13%), all of which were autoimmune related events (Table 3). These adverse events included pancreatitis, colitis, interstitial nephritis, pneumonitis and heart failure. Those immune- mediated adverse events were treated with discontinuation of pembrolizumab, high dose corticosteroids and supportive care. Two patients required hospitalization. All three patients had CR with pembrolizumab. There were no reported treatment-related deaths in our cohort of patients.

*Calculations were based on 23 patients who received at least one dose of Pembrolizumab. Above are listed the adverse events reported between the first dose and 30 days after the last treatment dose. For serious immune relat

The Objective Response Rate (ORR) in our cohort of patients was 52% and Complete Response Rate (CRR) was 48% after a median of 11 cycles of pembrolizumab. At the time of data collection, all 11 patients with complete response remained disease free. Our study showed a median OS and PFS of 60 months and 29 months, respectively. When comparing to the oncologic outcomes of the pembrolizumab group in KEYNOTE-006, the results reported in our study showed a higher response rate with longer OS and PFS. KEYNOTE-006 demonstrated an ORR of 36% and a CRR of 13% [11]. The estimated PFS of our population was 29 months compared to 5.6 months in the KEYNOTE-006 cohort. Multiple factors can explain the overall favorable results reported in this study. First, our cohort of patients was evaluated using FDG-PET scan with the PERCIST criteria, which could overestimate the response rate [15-17]. Using FDG-PET scan and PERCIST criteria instead of computed tomography imaging and RECIST criteria, as used in the KEYNOTE trial, can explain the higher number of complete responders as well as our improved overall response rate. Although our cohort of patients had similar baseline demographic and clinical characteristics as patients enrolled in the KEYNOTE-006 trial, the small cohort size remains a major limitation of this study and limits the direct comparison and generalization of our statistical results.

The favorable safety profile of pembrolizumab observed in this study is consistent with the toxicity that had already been described in the literature [9-11]. Most patients (65%) developed adverse reactions during the treatment period, with a majority of self-limited grade 1 and 2 toxicities. Grade 3 and 4 adverse reactions were reported in 13%. They were all autoimmune related events which were managed medication and discontinuation of treatment with no long-term consequences.

This retrospective study has some limitations, including its small sample size and its relatively short follow-up period compared to large randomized control trials. Nonetheless, it reports the “real life” data and experience of our center with its first cohort of patients treated with the anti-PD1 pembrolizumab after being approved by Health Canada. Our results further support the safe and effective use of pembrolizumab in patients with advanced and metastatic cutaneous melanoma.

The authors state that they have no Conflict of Interest.

Copyright: © 2021 Mansouri S, et al. This is an open-access article distributed under the terms of the Creative Commons Attribution License, which permits unrestricted use, distribution and reproduction in any medium, provided the original author and source are credited.