Copyright: © 2017 Akbari N, et al. This is an open-access article distributed under the terms of the Creative Commons Attribution License, which permits unrestricted use, distribution, and reproduction in any medium, provided the original author and source are credited.

In this paper, we used Flex-PDE software to study the blood flow with nanoparticles in a magnetic field as a third grade non-Newtonian through porous vessels. Viscosity of Nano fluid is clear via Constant, Vogel’s and Reynolds’ patterns. The performance of Flex-PDE software is briefly raised and employed to derive solution of nonlinear equations. Attempts are performed in order to indicate the validity and performance of the present software in comparison with Collocation Method (CM). Comparison between the Flex-PDE software and analytical conclusions of the issue, illustrates excellent complying in solving this nonlinear differential equation. As well as, in the present perusal, the impact of various physical parameters like: Grashof number, pressure gradient, thermophoresis parameter, Brownian motion parameter and magnetic field intensity on concentration, velocity and temperature profiles are examined. Conclusions displays that velocity profile has direct relationship with thermophoresis parameter Nt but Brownian motion Parameter Nb has reverse relationship with velocity profile V(r). In addition, this study illustrate that Flex-PDE is strong software to solve nonlinear differential equations, such as the issue introduced in this research.

The study of non-Newtonian fluids has become important in the past two decades and this is mainly due to the widespread use of this fluid. The recent advances in nanotechnology have led to develop a new group of technology in heat transfer named Nano fluids, as far as the study in the field of Nano fluids has found very broad dimensions. Particularly, these fluids are used in industrial applications such as glues, coal slurries, biological solutions, polymers solution or melts, asphalts, paints, greases and lubricant, cooling issues, filtration practice and hydrocarbon oils etc. [1-7]. However, on the one hand, researchers are pursuing the preparation and manufacturing of Nano fluids with variety of nanoparticles and nanotubes having different size distributions, regarding increasing of thermal conductivity and heat transfer of fluids; while, some of the researchers are dealing with investigating the issue of stability and non-settling of nanoparticles during the heat transfer process and the lack of agglomeration or migration of them. However, close examination of sources shows that a very little attention is paid to the non-Newtonian Nano fluids (proportional to the extent of the ability of the fluid) [8].

Human blood is a combination of white blood cells, red blood cells, and platelets in a fluid called plasma, which contains organic and mineral salts and protein. According to the high volumetric percentage of red blood cells relative to other particles (97%), physically the blood behavior is mostly similar to the red cells and proteins of the plasma. The plasma has a Newtonian behavior; however, the blood shows equivalent non-Newtonian behavior of shear thinning with increasing of shear rate and reduction in viscosity, so that sometimes the viscosity changes up 5 to 10 times. However, it is almost constant in high shear rates and the blood has a behavior similar to Newtonian fluids. Now, studies in this area have found very broad dimensions. Ogulu and Amos [9] created the pulsatile blood flow model using the Navier- Stokes equation in the cardiovascular system and found that with increasing porosity of the medium, an increase in the wall shear stress is observed. Nandakumar et al. [10] the effects of Reynolds number (Re) and percentage stenosis on steady flow, and Womersley number (Wo) on pulsatile flow, of blood via a two-dimensional channel with stenosis are considered. Their outcomes illustrate that applying a Newtonian model will explain reasonably accurate conclusions for plaque growth in aorta-sized vessels and wall shear stress. Moyers- Gonzalez et al. [11] on the designing of oscillatory blood flow in a pipe, observed that by increasing frequency of the (constant amplitude), shear stress, the top amounts of the velocity field and pressure gradient oscillations decreases. Recently, Srinivas et al. [12] the flow and heat transfer of blood carrying gold nanoparticles in a porous channel with moving/stationary walls in the attendance of thermal radiation are studied. They applied the Homotopy Analysis Method (HAM) to solve governing equations of blood carrying gold nanoparticles. In an empirical study Sinha et al. [13] investigated concerning the impact of externally imposed periodic body acceleration on the flow of blood by taking into account the slip velocity at the wall of the artery and blood as a non-Newtonian fluid through a time-dependent stenosed arterial segment. Many researches are focused on second and third grade non- Newtonian fluids which some of them are introduced in this article. Solution and modeling of the unsteady flow of an incompressible third grade fluid within a porous medium aboard a porous sheet is analyzed by Aziz and Aziz [14]. They assumed that the fluid is electrically conducted used transversely to the flow in the attendance of a uniform magnetic field. Flow analysis and heat transfer for blood conveying gold nanoparticles as a third degree non-Newtonian in porous medium with attendance of magnetic field are simulated by Hatami et al. [15]. Baoku et al. [16] studied the influence thermos physical parameters and third degree, partial slip on the steady flow, heat and mass transfer past of an infinite vertical insulated plate of viscoelastic third degree fluid expose to suction throughout the boundary layer. Moreover, many scholars examined on non-Newtonian Nano fluids and their applications on the blood field and other [17-19]. In this paper, we have applied Flex PDE software to find the solution of nonlinear differential equations governing the blood flow with nanoparticles in a magnetic field as a third grade non-Newtonian through porous vessels. As well as, the concentration, velocity and temperature profiles are shown and the impact of Grashof number, pressure gradient, thermophoresis parameter, Brownian motion parameter and magnetic field intensity are studied. The acquired results from Flex-PDE software are compared with those of acquired from Collocation Method (CM) to check the precision of the explained Solution. Method (CM) is an efficient manner based on the trial Function that is for study of nonlinear issues. The comparison of the conclusion of Flex-PDE software and Collocation Method (CM) illustrate excellent complying in solving this nonlinear issue.

Consider a porous artery containing steady, incompressible, non- Newtonian Nano fluid in presence of a magnetic field. The outline and coordinates of the issue are presented in Figure 1 in order to have a better understanding. In this paper, the blood flow is designed as the one-dimensional issue. Although blood flow is a three-dimensional problem, its modeling is currently not possible regarding the long computation time that is required to model the vascular network as well as the fluid-solid interaction between the blood and the vessel wall. As well as, the blood is considered as a third-grade non-Newtonian fluid containing nanoparticles. The governing boundary layer equations acquired by Rahbari et al. [20], as systems of nonlinear ordinary differential equation are given by: 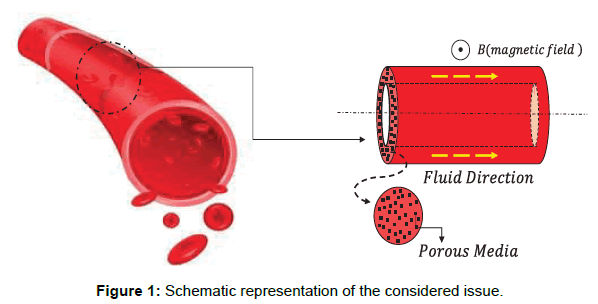 The boundary conditions are [20]:

This problem for three case of μ has been examined

In this section two solution have been examined for solve differential equation:

Flex-PDE is unique software to build and perform multiple analyses of mathematical models of real systems and patterns and to identify and describe the problems and their performance. This software is able to produce statistical model from different data in the fields of physics, mechanics, electromagnetics, chemical reactions, particle emissions, etc. and to address the analysis of models behavior and stress in a structured environment in the form of 1D, 2D and 3D. Numerous articles in various fields of non-Newtonian Fluids have been given by this software [21,22].

Some features of this software are including:

• Use from dependence equations, differential, and integral for modeling.

• The possibility of customizing models and graphs and annotating on them.

• The ability to descriptive analysis of equations.

The tolerance in this software is named ERRLIM which is adjusted in the SELECT part in the text. This command tells the Flex-PDE to break any cell for which the error of the consistency study is more than 0.001% and perform out the solution again. The advantage of this software is that it amends the grid twice. This means that Flex- PDE has a high consistency with the numerical solution. In this paper, we compare the conclusions of Flex-PDE software with obtained conclusions from CM and by writing Flex-PDE software codes for Eqs. (1) and (3). This table is parts of the Flex-PDE software codes. For guidance of codes written in this article.

Weighted residual manner was first introduced by Ozisk [23] to solve the differential equation in heat transfer; Galerkin and Collocation manner are analytical methods that are based on the weighted residual manner. In Collocation Method, a trial family of approximate solution T, containing a finite number of undetermined coefficient C1, C2,… and Cn can be constructed by the superposition of some basic functions like polynomials, the trial solution and trigonometric functions is so selected that it satisfies the essential boundary conditions for the issue. Hereupon, the issue of constructing an approximate solution becomes one of determining the unknown coefficients C1, C2, … and Cn. Thus, the residual stays close to zero throughout the domain of the solution.

Application of Described Software and Method in the Issue

Since Trial Function must satisfy the boundary conditions in Eq. (4), so they will be considered as:

The comparison of the outcome of Flex-PDE software with the outcome of the CM was done. In addition, this investigation shows that Flex-PDE is strong software to dissolve nonlinear differential equations.

Table 1: Parts of the Flex-PDE software. 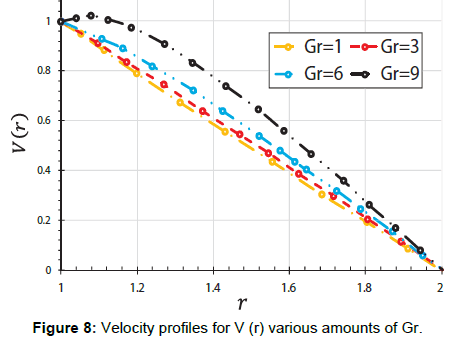 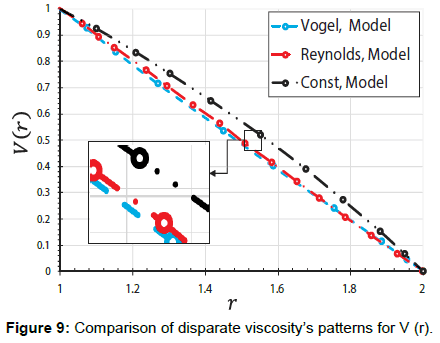 In this essay, the blood flow with nanoparticles in a magnetic field as a third grade non-Newtonian through porous vessels is investigated. For this purpose, new efficient software called Flex-PDE is introduced which solves nonlinear problems. As well as, the impact of various physical parameters like Grashof number, pressure gradient, thermophoresis parameter, Brownian motion parameter and magnetic field intensity on concentration, temperature and velocity profiles are examined. Outcomes displayed that:

• By decreasing of pressure gradient, (C) the amount of velocity profile V(r) increases.

• Result is clear that Brownian motion parameter doesn’t have a predictable behavior.

• The highest amounts of velocity are arrived when the Vogel’s model is applied for viscosity of Nano fluid.

In addition, the performance of the biological systems can be improved by controlling the nanoparticle behavior. This Problem lets helping in the effective transfer of cargo within cells or tissues. Finally, it will be clear that Flex-PDE is excellent analytical software and due to its efficiency, it could be used for solving different issues.