Copyright: © 2015 Han D, et al. This is an open-access article distributed under the terms of the Creative Commons Attribution License, which permits unrestricted use, distribution, and reproduction in any medium, provided the original author and source are credited.

A device that can detect the concentration of total organic carbon (TOC) continuously was designed by combining the technology of supercritical water oxidation (SCWO) and non-dispersive infrared analyzer (NDIR). CuSO4, as one of the common homogeneous catalysts in the SCWO of wastewater, was introduced into the device to lower the reaction temperature and improve the utilization efficiency of H2O2 oxidant. Catalyst use was seen to improve destruction rate significantly, when compared with the results obtained during the non-catalytic experiments. While the oxidant stoichiometric excess needed was ten times or more under non-catalytic condition, it only needed to be two for CuSO4 catalytic system. With CuSO4 solution pumped into the reaction system, lower energy consumption was required and less thermal and mechanical stresses exist within the detecting equipment. The device could detect the concentration of TOC for practical wastewater with low proportion of inorganic carbon precisely and continuously, while for those with high proportion of inorganic carbon a pre-treatment like acidification was needed.

Supercritical water oxidation (SCWO) is a new-fashioned technology of waste treatment proposed by Modell in the 1980s [1]. It can oxidize organic pollutants, difficult to be degraded, efficiently and completely [2] and has received a great deal of attention as an effective and promising treatment method of hazardous organic pollutants [3]. Water is a kind of excellent solvent when the temperature and pressure exceed its critical point (T=374.3°C, P=22.1 MPa). One of its greatest properties is that it becomes completely miscible with gas and various organic compounds [3,4]. Heterogeneous reaction between gas and liquid will become homogeneous reaction under supercritical conditions, as the reaction then is no longer limited by interphase mass transfer, the reaction can be greatly accelerated [4-6]. For last decades, SCWO has most often been used to treat dilute organic waste streams that may be otherwise difficult to process. Studies on SCWO have been mainly focused on the oxidation of various organic compounds including PCBs and dioxins [7]. But the utilization of SCWO in TOC detection is rarely reported.

Total organic carbon (TOC), as an index assessing the degree of water environment polluted by organic matter, is widely used in water quality control, especially in many developed countries like USA and Germany. The commercially available analyzers for TOC measurement differ in the method of oxidation or the type of detector. And the tracking of CO2, obtained in oxidative process, is the core of modern TOC analyzers [8]. NDIR is a most widely used detector that can be successfully applied for the continuous monitoring of CO2 generated in chemical processes.

The traditional TOC detection not only needs to be carried out at a high temperature, but also needs to be added to the expensive solid phase catalyst. The catalyst generally has a certain service life and needs to be replaced regularly. SCWO, because of its characteristics of fast reaction speed and complete oxidation, can be used as the oxidation method in the TOC detection process and it is easy to implement continuous testing. It can not only react at a lower temperature, but also avoid the replacement of the catalyst.

In the earlier research, a new device, by combining SCWO with the technology of NDIR, was developed to monitor the TOC in water continuously [9,10]. Relative tests indicate that it’s feasible in practice. However, the equipment now still needs to run at a temperature as high as 460°C and pressure 24.0 to 26.0 MPa. Moreover, the amount of H2O2 oxidant must be 10.0 times the theoretic dosage or more [9]. Such harsh operation conditions will put forward higher requirements on the pressure-bearing components and result in the waste of resources. It will bring the drawbacks like high cost of pressure-bearing equipments and safety risks to the device inevitably.

The activation energy in chemical reaction can be lowered or the path of relative chemical reaction can be changed by using catalyst [11], the process to achieve complete oxidation of organic components can be also greatly accelerated. The catalytic SCWO process is expected to be much more feasible for practical application in the aspects of device safety, durability and economy [12]. So catalyst was adopted aiming to lower the operating temperature, the energy consumption of the device, as well as to improve the formation efficiency of CO2. The possibility to increase the utilization efficiency of oxidants was also tested herein. As earlier studies have shown that the influence of pressure on the destruction rate was relatively not obvious, and the optimized pressure was 24.0 to 26.0 MPa [9], no experiments was specially designed to explore the influence of pressure on TOC destruction rate.

The catalysts used in SCWO can be mainly divided into noble metals, metal oxides and transition metal salts. Besides, H4Si12O40 [11] and activated carbon [13] were also investigated as catalysts in the SCWO of organic components. Maintaining catalyst activity is even more critical in supercritical water, because interactions between the catalyst and water may be extensive and irreversible. Heterolytic reactions can be strengthened in the presence of an ionic environment, i.e., the addition of acids, alkali, salts or catalysts and the formation of dimerization products can be minimized in this way [11]. So it seems much more suitable to adopt some kind of homogeneous catalyst. As Cu2+, frequently-used in homogeneous catalytic SCWO, has been proven to be an efficient catalyst [14,15], CuSO4 was introduced to provide the Cu2+ needed.

The aim of this study is to investigate the catalytic effect of Cu2+ in the oxidation of organic chemicals in supercritical water and the feasibility of the experimental device in the continuous detecting of TOC.

Potassium biphthalate (AR) was used in the experiment as a model pollutant, the standard substance used in the correction of TOC analyzer. Hydrogen peroxide (H2O2, 30% (w/w), AR) was chosen as oxidant without any further treatment, which can decompose easily and turn into oxygen and water when heated. CuSO4∙5H2O (AR) was chosen to provide Cu2+ needed in the preparation of homogeneous catalyst.

A schematic diagram of the device used in the experiment is shown in Figure 1. The reactor used in the experiment was consist of an electric stove and a spiral tubular reactor made of stainless steel (SS) tube with 0.125’’ o.d. and 0.060’’ i.d. The temperature of the stove can be precisely regulated by a PID controller. A back pressure valve was adopted in the system to control the pressure. Organic and CuSO4 solution with a certain concentration, super pure water and oxidizer were mixed proportionally by using the low pressure gradient mixer, and then pumped into the reaction tube by high-pressure metering pump. Redox reaction occurred in the mixed liquid in the reactor under given temperature and pressure. The liquid after reaction is cooled by a water bath cooling device and then released to normal pressure by the back pressure valve. The effluent then flowed into the gas-liquid separation device, in which CO2 generated and dissolved was blown-off by high purity N2 (99.999% (V/V)). The mixed gas of N2 and CO2 flowed through an electronic dehumidifier to remove residual water. At last the gas mixture flowed into the NDIR detector to get the amount of CO2 generated. As the signal intensity of NDIR reflects the concentration of CO2, and there is a linear relation between TOC and CO2 generated, there is also a linear relation between TOC and NDIR signal. Then the amount of TOC in water can be obtained by such a relation.

Experiments were also conducted under optimized conditions to assess the performance of the device. Practical samples of wastewater used in the experiments were got from several different industries. Another TOC analyzer used to offer the comparative data was made by Shimadzu with a type of TOC-VCPH/CPN.

The destruction rate X, as an assessing index used in the experiment, was used in later discussion of the result, which was defined as equation (1), of which, TOCm (mg L-1) was the value of TOC detected by the device and TOCt (mg L-1) was the theoretical value transformed from the concentration of potassium biphthalate in the solution.

The index of oxidant stoichiometric excess was used to measure the amount of H2O2 oxidant used in the experiment. It represents the ratio of practical and theoretical oxidant dosage.

Feasibility of detecting the TOC in water based on SCWO

Experiments testing the feasibility of the method in detecting of TOC were conducted with temperature of 460°C, pressure of 24.0 MPa and hydrogen peroxide oxidants 10.0 times the amount calculated by the chemical reaction equation. It can be firmly considered that under such conditions organic substance have been thoroughly oxidized. T﻿he relationship between NDIR signal value and potassium biphthalate concentration is shown in Figure 2. It is obvious that the NDIR signal value present a nice linearity with the concentration of potassium biphthalate pumped into the device. Actually, the value of R square in the linear fitting of the two variables reaches 0.9996. So it is greatly believed the feasibility in theory and practice to adopt this device to detect the amount of TOC. 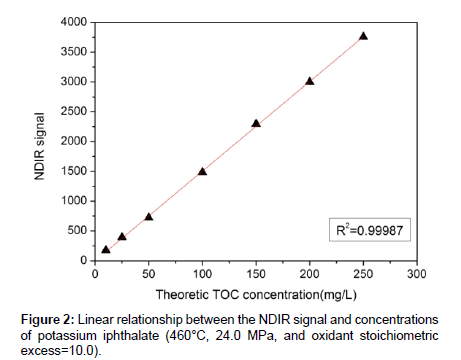 Effect of temperature on the destruction rate 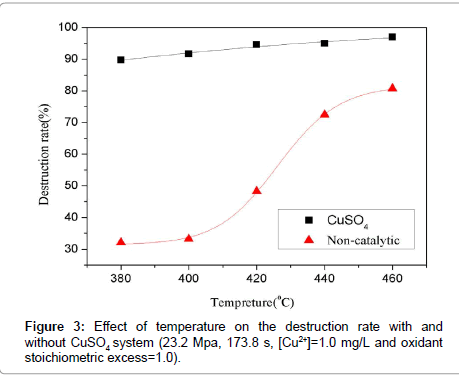 Effect of oxidant stoichiometric excess on the destruction rate 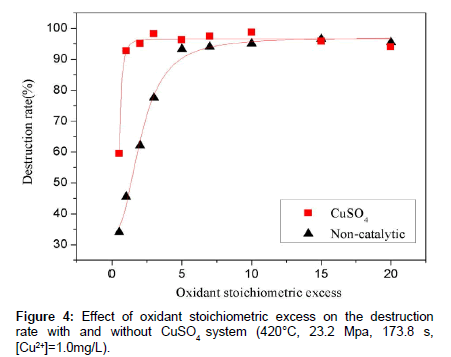 Effect of residence time on the destruction rate 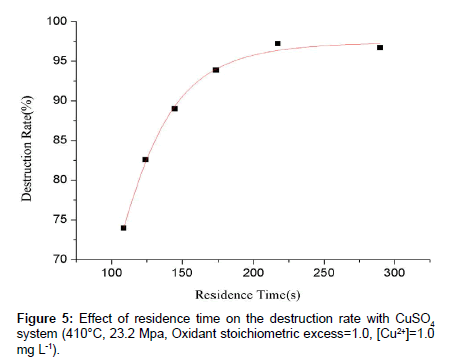 Practical wastewater used in the experiments was obtained from several pharmaceutical, chemical industries and a sewage outfall. Table 1 shows the TC, IC and TOC concentration detected by Shimadzu TOC analyzer and TOC value detected by the experimental device.

This work was supported by the Zhejiang Provincial Natural Science Foundation of China under Grant LY12B07009.