Department of Chemistry, University of Alabama in Huntsville, USA

Copyright: © 2014 McFeeters H, et al. This is an open-access article distributed under the terms of the Creative Commons Attribution License, which permits unrestricted use, distribution, and reproduction in any medium, provided the original author and source are credited.

Understanding peptidyl-tRNA and the enzymes responsible for recycling them has come from the ability to detect and quantify enzymatic peptidyl-tRNA hydrolysis. The methods available to study removal of peptides from tRNA have evolved considerably. Radioactive [14C] amino acids were first implemented to monitor cleavage of the peptide-nucleotide ester bond of uniform peptidyl-tRNA substrates. Later, Northern blots with radiolabeled oligonucleotide probes were used to observe cleavage of specific peptidyl-tRNAs or individual tRNA from bulk peptidyl-tRNA populations. Finally, the use of fluorescently labeled amino acids was introduced, which could be coupled to anisotropy or PAGE readouts. Here we review the methods for quantification and analysis of enzymatic peptidyl-tRNA hydrolysis and summarize their inherent advantages and disadvantages.

Peptidyl-tRNAs are thought to be inconspicuous molecules found in all cells. This is mainly due to cells having developed efficient means to recover tRNA from the unusable peptide bound form. However, the significance of peptidyl-tRNA and its enzymatic hydrolysis is finally being discovered, particularly in regard to impact on protein biosynthesis and cell viability.

From a biochemical point of view, peptidyl-tRNA is somewhat of an enigma having dual character – part peptide, part nucleic acid, Figure 1. This dual character leads to tremendous heterogeneity. Peptidyl-tRNA isolated from any given cell is a mixture of more than 40 tRNA molecules and considerably larger number of peptides [15]. Even with all of the possible differences, the character of the tRNA component is fairly uniform – a typical “clover leaf” structure with large negative charge. Each has an attached peptide of variable length and composition. The nature of the peptide component is much more heterogeneous and largely determined by size and composition. The presence of a shorter peptide does not change the properties of the molecule much from the properties of tRNA itself. A larger peptide chain can, however, significantly alter the molecular properties and have implications for the choice of methods to analyze peptidyl-tRNA enzymatic hydrolysis.

Herein we review the methods that have been developed to monitor the cleavage of the peptide-tRNA ester bond of peptidyltRNA. The methods are separated into three categories based on the underlying principle used to determine the degree of hydrolysis using: (1) radioactive labeled amino acids, (2) electrophoretic separation of tRNA, and (3) fluorophore conjugated amino acids. The methods differ in their requirements for peptidyl-tRNA uniformity. While most employ a specific peptidyl-tRNA, it should be noted that production of uniform specific peptidyl-tRNA molecules is rather challenging. Therefore, specific peptidyl-tRNA tends to be replaced by a modified aminoacyl-tRNA for in vitro experiments. Moreover, there are instances in which observation of a heterogeneous sample of peptidyltRNA is advantageous. The selection of an appropriate method for peptidyl-tRNA hydrolysis should take into account several factors: hydrolysis product of interest (peptide or tRNA), amount of peptidyltRNA necessary to accomplish the study, and feasibility of the method given constraints on time, equipment, and resources.

The first reported methods for study of peptidyl-tRNA hydrolysis utilized [14C] labeling. Initially a [14C] labeled amino acid was attached to the tRNA using the appropriate tRNA synthetase. Peptidyl-tRNA was then formed by condensation of an additional peptide with the [14C]-aminoacyl-tRNA [16,17]. The preparation of such peptidyltRNA was formidable but yielded a natural and very relevant substrate for enzyme studies. To measure activity, tRNA was precipitated with TCA after incubation with Pth1. Soluble hydrolysis products, the [14C] peptides, were separated with paper chromatography, visualized using ninhydrin staining, and quantified by scintillation counting of the excised peptide band. Early initial insight into the enzymatic activity of bacterial Pth1 was gained using this methodology [16,17]. Several subsequent modifications have been reported. The amount of hydrolyzed peptide was determined using scintillation of the supernatant obtained by centrifugation of the TCA quenched reaction mixture omitting the paper chromatography separation step [18] and N-acetyl-[14C]-aminoacyl-tRNA was used instead of peptidyltRNA [19]. While Pth1 is not able to hydrolyze aminoacyl-tRNA, it does catalyze the cleavage of N-acetyl-aminoacyl-tRNA. Introducing N-acetylated-aminoacyl-tRNA thus simplified the preparation of the substrate and, like the omission of the paper chromatography step, expedited the assay.

Radioactively labeled peptidyl-tRNA has also been generated using an in vitro translation system with [35S]-Methionine incorporated into TnaC peptide [20]. This peptidyl-tRNA has not been used as a substrate for Pth activity assays but, made in sufficient quantity, would be an excellent specific substrate. In addition, this system could be readily modified for production of other specific peptidyl-tRNA as in the case of fluorescently labeled peptidyl-tRNA below. Upon enzymatic hydrolysis, the remaining nonhydrolyzed substrate as well as the hydrolyzed peptide could be precipitated, separated using PAGE, and visualized by autoradiography. Quantification of hydrolysis would then be determined based on band intensity.

The methods employing radioactively labeled amino acids are well suited for determination of Pth enzyme kinetic parameters. They are extremely sensitive, can be used for a wide range of signal intensities (i.e. substrate concentrations), and quantification can be readily performed. On the other hand, they require the use of a specific peptidyl-tRNA, production of which is a multistep process that may be unnecessarily demanding for certain applications. The use of radioactivity may also be undesirable or problematic. It has also been shown that the rate of Pth1 hydrolysis depends on peptide composition [18] and length [21] which is not accounted for by using N-acetyl-aminoacyl-tRNA or a single peptidyl-tRNA species.

Separation of tRNA using low pH urea polyacrylamide gels was introduced to study the levels of aminoacylation in E. coli [22]. Total RNA isolated from the cell was separated on an acid-urea polyacrylamide gel and tRNAs (free, aminoacyl, and peptidyl) detected using a specific nucleotide probe labeled with [32P]-ATP (i.e. a Northern blot), Figure 2. This technique was further simplified by using minigels instead of large gels traditionally used for nucleic acid separation [23]. The analysis could be further expedited by employing nonspecific nucleotide staining [24,25]. Compared to those employing radioactively labeled substrate, this method makes observation of both the hydrolyzed product (tRNA) and the nonhydrolyzed peptidyl-tRNA possible on one gel. However, it is limited to the use of peptidyl-tRNA with very short peptides because, in general, larger peptides tend to have more positive charge at lower pH. This prevents peptidyl-tRNA from entering the gel. 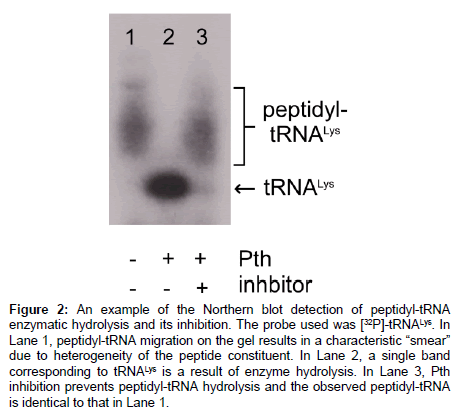 Methods using electrophoretic separation of tRNA are well suited for determination of Pth enzymatic activity. They allow the use of heterogeneous peptidyl-tRNA directly isolated from cells and hydrolysis for the entire population. Specific peptidyl-tRNAs can also be used. The fact that these methods are relatively nondemanding in terms of substrates, yet work with natural substrates, makes them very attractive for many applications. The ability to perform enzymatic hydrolysis with heterogeneous, bulk peptidyl-tRNA isolated from bacterial cells, separate the reaction products on a minigel, and stain for detection makes the analysis of peptidyl-tRNA enzymatic hydrolysis achievable in any biochemistry laboratory.

The most recent development in the analysis of enzymatic peptidyltRNA hydrolysis has been the introduction of fluorophores conjugated to amino acids. The concept is the same as for [14C] studies but is less hazardous and has extended utility from the ability to detect changes in fluorescence anisotropy. Initial reports of fluorescent peptidyl-tRNA hydrolysis used BODIPY® FL succinimidyl ester for the labeling of lysyl-tRNALys used in downstream applications [26]. Similarly, Oregon Green was used for labeling of methionyl-tRNAMetm [27]. Later, introduction of fluorophore labeled methionine to initiator tRNA was utilized to introduce a fluorescent label to any peptide produced using an in vitro translation system [28].

Several possibilities exist to determine the amount of hydrolyzed peptidyl-tRNA using fluorescent amino acids. Peptides could be separated from peptidyl-tRNA via HPLC with a fluorescence detector measuring output [26]. Also, changes in fluorescence anisotropy could be used as an indicator of hydrolysis [26], a method adaptable to higher throughput screening. In addition, separation of hydrolysis products can also be achieved using three-layer low pH Tris-Acetate SDS-PAGE [29]. The advantage of these gels is that they enable use of peptidyl-tRNA with longer peptide constituents. Like the previous methods employing electrophoretic separation, this technique allows observation of both hydrolysis product (in this case the peptide) as well as the substrate (nonhydrolyzed peptidyl-tRNA) (Table 1).

aHPLC with a fluorescent readout was used to validate the enzymatic hydrolysis of peptidyl-tRNA while fluorescence anisotropy was used for determining the activity of Pth1.

The development of fluorescent labeling techniques resulted in the first high throughput, anisotropy based assay for screening of potential Pth1 inhibitors [26]. Fluorescent approaches rely on fluorescently labeled specific peptidyl-tRNAs or aminoacyl-tRNA. Disadvantages to this method are high cost and batch to batch variability. On the other hand, thanks to the high sensitivity of fluorescent probes, relatively small amounts of substrate are required for detection, partially offsetting the cost. Fluorescent probes enable straightforward quantification of peptidyl-tRNA hydrolysis and Pth activity or inhibition provided the equipment (fluorescence reader, spectrofluorimeter capable of anisotropy measurements) is available. It should be taken into account that fluorescence background from natural products and synthetic small molecules can be problematic for Pth inhibitor screening.

The development of Pth functional assays has allowed implementation of several significant applications. Having a functional assay can be used to determine whether a potential Pth gene or putative Pth-like domain can hydrolyze or even bind peptidyl-tRNA (i.e. fluorescence anisotropy). This ability has led to the definitive determination that plant CRS2 (a putative Pth) can bind, but not hydrolyze peptidyl-tRNA (McFeeters, unpublished), in agreement with in vivo complementation studies [30].

The first functional radioactive assay allowed for the determination of Pth kinetic parameters [16,21] providing insight into mechanism and comparison between different Pth enzymes or mutants [19]. A more readily producible probe for Northern blot readout enabled initial screening of Pth1 inhibitors [31,32]. Further methodological improvements, in particular the ability to use fluorescence readouts [26] has led to higher throughput screening and more potential to advance Pth1 as an antibacterial target.

In conclusion, multiple methods exist for the measurement of peptidyl-tRNA cleavage and Pth enzyme activity. Each has distinct advantages, which should be taken into account for new applications. Improvements in generation of specific peptidyl-tRNA, including synthetic approaches [33] and in vitro translation [20,28], continue to advance. With ever improving bioanalytical techniques, even simpler, more robust, and relatively quicker methods with higher throughput are on the horizon.