Abstract Dental caries or tooth decay is a breakdown of teeth due to bacterial activities, in bacterial breakdown hard tissues is one of the damage of dental caries; it becomes a public health concern, Studies showed that body mass index gives association with many diseases including dental caries. Our objective of this study was to drive the relationship of body mass index and dietary habits on dental caries experience of Pakistani children. The data for this study is the part of a multicenter country wide study being conducted to determine the eruption of permanent teeth and dental caries of Pakistani children. Data from Larkana and Peshawar the cities of two major Provinces of Pakistan were examined. 3358 children of just erupted teeth of aged between 5 to 19 years from these two cities were examined. 64.1% data were received from Peshawar city and 35.9% data were obtained from Larkana city. Results showed 52.2% were female samples and 47.8% were male sample. Outcome of Mann-Whitney U test gives the evidence that there was significant mean difference observed for carries of two cities, poisson regression model evident that the association of body mass index with carries experience. In our study mean permanent caries among Peshawar city children was almost double than Larkana city, even though height, weight and body mass index of Peshawar children higher ,one of the reason of Larkana child protection from caries was more used of milk and rise as compared to Peshawar Children. This study concludes that permanent DMFT risk for Peshawar city children was higher, and primary dmft had negative association with body mass index.

The primary objective of this study was to report the mean and Standard Deviation of primary, permanent, and overall dental carries among Larkana and Peshawar city children from Pakistan and formulation of an appropriate statistical model to evaluate and predict the dental caries using the information of body mass index using Poisson regression (Figure 1). 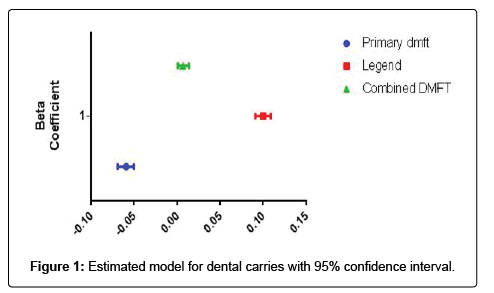 Data for this study is the part of a secondary baseline data for dental caries of a currently going project of Pakistani children, funded by Higher Education Commission, Islamabad, titled ‘Time and Sequence of Eruption Teeth of Pakistani Children [12]. The co-author of this study is the Principal Investigator of that Project.

We used secondary data, but in project [12] Multistage Systematic Cluster Random sampling was performed to collect the data on study variables: age, gender, and type of school. The dentists also examined the children for dental caries and eruption of teeth.

Data were collected from school going children from Larkana, Sindh and Peshawar, KPK province of Pakistan aged between 5 to 19 years.

Table 1, provides the baseline characteristics of studied sample, results showed out of 3358 sampled children 64.1% were from Peshawar city, 53.6% children were more than eight years old; the mean age of sample children was 8.62 ± 2.19 years with 95% confidence interval (8.42, 8.69). More than 50% data were received from female gender and the male to female sample ratio was 1:1.09. Body mass index was computed on percentile basis with respect to age and gender. In the current study 80% children were found within normal weight, 15% children were found overweight or obese. 45.7% had good oral hygiene. 45.7% children found with good oral hygiene, and 15.2% with poor oral hygiene.

In the present study the mean dmft was 1.43 ± 2.11, mean DMFT was 0.75 ± 1.36 and overall mean decayed, missing and filled teeth was 2.18 ± 2.49. Sami et al. showed that the 12-year Quetta children had mean DMFT of 0.61. The mean DMFT of this study is close to Quetta children. A Saudi Arabian study [3] reported the mean dmft score was 3.4, which was much higher than this study. This study also gives significant mean of primary, permanent and overall differences between Larkana and Peshawar children. It was observed that Peshawar children have higher caries as compared to Larkana children. Another study from Pakistan [10] showed that, the mean permanent caries among Peshawar children was 4.77, which was almost double than current study.

Study from European archives of pediatric dentistry [8] showed that overweight and obese children were 1.36 times and 1.99 times more likely to be have higher caries respectively. Study from Indian Journal [9] also reported a significant association between body mass index and DMFT. One more current international study [13] showed that higher caries among overweight and obese children as compared to control group.

Copyright: © 2017 Ali SA, et al. This is an open-access article distributed under the terms of the Creative Commons Attribution License, which permits unrestricted use, distribution, and reproduction in any medium, provided the original author and source are credited.