Copyright: © 2015 Visconti GL, et al. This is an open-access article distributed under the terms of the Creative Commons Attribution License, which permits unrestricted use, distribution, and reproduction in any medium, provided the original author and source are credited.

To evaluate CoQ10 concentration a UPLC/MS-MS method for its analysis in plasma samples was developed. Before validation, the choice of the anticoagulant, of the Internal Standard (CoQ9; IS) and the stability of CoQ10 in plasma were evaluated. These determinations were necessary to assess the effect of the oral intake of CoQ10 in nine healthy volunteers after 10 days of treatment with a food supplement containing it. The basal levels of CoQ10 were determined and the analyses were repeated after four days to take into account the variability of endogenous substances. After oral intake, the increase in plasma concentration of CoQ10 resulted statistically significant (P<0.05), indicating that the assumption of food supplements containing this ubiquinone could be of help to increase its concentration, thus exploiting the its beneficial properties.

Coenzyme Q10 (CoQ10; 2,3-dimethoxy-5-methyl-6-polipropenyl- 1,4-benzoquinone), also known as ubiquinone 10, is a lipophilic naturally occurring compound located in all membranes of eukaryotic organisms [1]. It is a benzoquinone with 10 isoprene units in the aliphatic chain [2] and it is essential for electron transfer in the mitochondrial respiratory chain, playing a key role in energy metabolism as an integral part of the electron transport system [3,4]. CoQ10 is the predominant ubiquinone species in humans and it originates from endogenous biosynthesis as well as from dietary intake. It is widely distributed in human tissues, especially in inner membranes of mitochondria where it affects their fluidity and permeability [3,5]. It plays a key role in maintaining the cellular redox state and acts as an antioxidant, inhibiting free radicals and showing synergism with other antioxidants [6].

CoQ10, found in most dairy products, vegetables, fruit and cereals has been studied as an antioxidant agent that protects circulating lipoproteins against oxidative damage [7] and it is recognized as a powerful systemic antioxidant that protects DNA, lipids and proteins against oxidative damage. In fact CoQ10 has been recognized to be useful in prophylaxis and therapy of various disorders related to oxidative stress, such as cardiovascular diseases [8,9], neurodegenerative diseases [10-12] and mitochondrial disease [13].

CoQ10 is a key factor in the aging process and the maintenance of this nutrient is a good strategy to preserve health during aging [14,15]. CoQ10 deficiency syndromes are potentially treatable disorders [16-18]. Immediate diagnosis leads to better prevention and correction of the clinical symptoms. CoQ10 deficiency can also be associated to a high risk of development of chronic diseases [19,20], such as heart failure, hypertension [21-23], neurodegenerative disorders, and diabetes [24]. CoQ10 can be supplied by diet, and its content is higher in animal products than in plant products [25,26]. Meat, fish, and vegetable oils are good sources of CoQ10, while vegetables, fruits, and cereals are a very poor source. It has been demonstrated that the oral intake of CoQ10 may also improve functional capacity and endothelial function in chronic heart failure [8] without any side effects. For these reasons in the last few years, the number of CoQ10 dietary supplements has increased rapidly. Several analytical methods have been developed for the determination of CoQ10 content, based on spectrophotometric, colorimetric [27], electrochemical [28,29] and electrophoretic techniques [30], but the method of choice is reversed phase high performance liquid chromatography (LC) with ultraviolet detection [31,32], electrochemical detection [33-35] or tandem mass spectrometry detection (MS/MS) [36,37]. The more recent reports deals with the development of miniaturized LC/UV systems [38] and the demonstration of the effect of CoQ10 in the reduction of the oxidative stress and of the inflammatory markers [39,40]. Moreover a study on the in vivo oxidation of CoQ10 was carried out [41]. The extensive scientific production in this field demonstrates that there is a great interest in CoQ10 due to its important physiological activities.

In this paper we developed and validated a UPLC/MS-MS method, based on a liquid-liquid extraction procedure, for the determination of CoQ10 in human plasma, which differentiates from the other methods because of the rapidity of extraction and the fast analytical times requested. The method was optimized using another endogenous substance, CoQ9, as Internal Standard (IS). CoQ9 is present in human plasma at not significant concentrations or at least its low amount does not influence its use as IS at the concentrations required for the analyses (Figure 1). 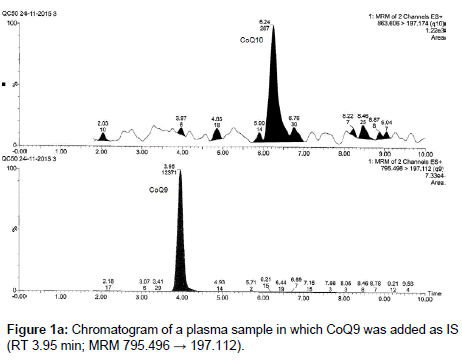 The method was applied to the analysis of CoQ10 in the plasma of nine healthy volunteers, assuming for 10 days food supplements containing it, in order to evaluate the increase of ubiquinone concentration in plasma after oral intake. The basal levels were assessed considering two withdrawals carried out four days away from one another to take into account the variability of endogenous analytes. Moreover the best anticoagulant and the best storage conditions were evaluated.

Coenzyme Q10, coenzyme Q9 (IS), methanol, acetonitrile and hexane were obtained from Sigma Aldrich (Germany); ethanol was supplied from Fluka (Germany). All reagents were of analytical grade and were stored as required by the manufacturer. Water (18.2 mΩ/ cm) was prepared by a Milli-Q System (Millipore, France). Quality control (QC) samples were prepared in physiological solution at a concentration of 100 ngtot to test the performance of the analytical method.

For the stability test of CoQ10, five plasma samples supplied by the Centro Diagnostico Italiano (CDI) from five healthy volunteers were taken into account. For the evaluation of the increment of CoQ10 concentration before and after the oral intake of food supplements containing CoQ10, 9 healthy volunteers were treated with a food supplement containing CoQ10 (16 mg) with high solubility (Eufortyn 10 FL 15 ML, 130 mg) for 7 consecutive days. Plasma was taken before the treatment and at the end of the treatment. Analyses were carried out in triplicate, considering the median value among the three determinations.

Plasma (250 μL) was added with IS (100 μL, 1 μg/mL), methanol (400 μL) and extracted with hexane (1 mL). The mixture was put on a rotary shaker (15 min, 15 rpm) and then centrifuged (5 min, 5000 rpm). The supernatant was withdrawn and the solvent evaporated. The residue was stored in the refrigerator (4°C) in vials wrapped in aluminium foil to prevent degradation caused by light and dissolved in acetonitrile (200 μL) before LC analysis.

The MRM transitions selected for CoQ10 and the internal standard (IS, CoQ9) are shown in Table 1.

Optimization of the Analytical Method

Choice of the Internal Standard (IS)

CoQ9 is an endogenous ubiquinone structurally related to CoQ10; it was chosen as an internal standard because it is not detectable in the small amount of plasma used for the analysis (250 μL), due to its low concentration in human plasma or at least its low amount does not influence its use as IS at the concentrations required for the analyses; therefore it does not interfere in the quantification of the analytes. Moreover it is well separated from CoQ10 (Figures 1a and 1b). 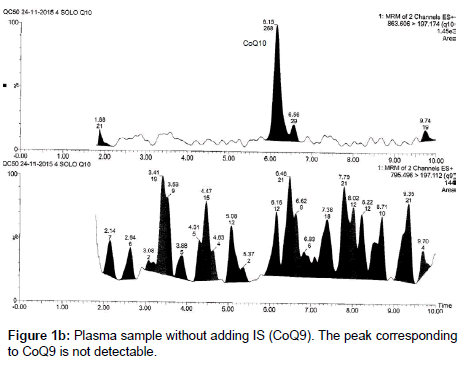 Figure 1b: Plasma sample without adding IS (CoQ9). The peak corresponding to CoQ9 is not detectable.

Choice of the anticoagulant 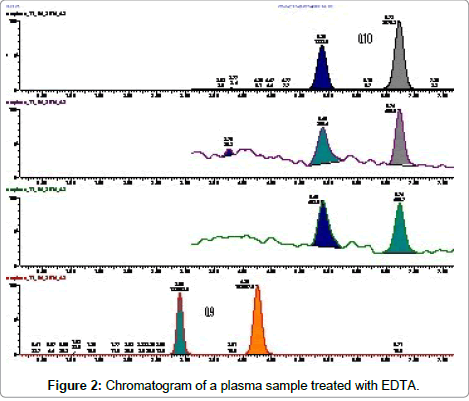 Figure 2: Chromatogram of a plasma sample treated with EDTA.

In the case of heparin a cleaner chromatographic profile was obtained (Figure 3), but the highest sensitivity was obtained treating plasma samples with sodium citrate (Figure 4). 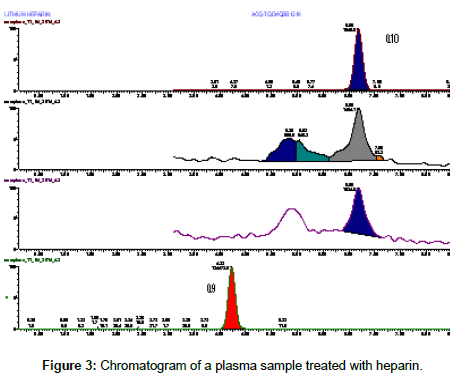 Figure 3: Chromatogram of a plasma sample treated with heparin. 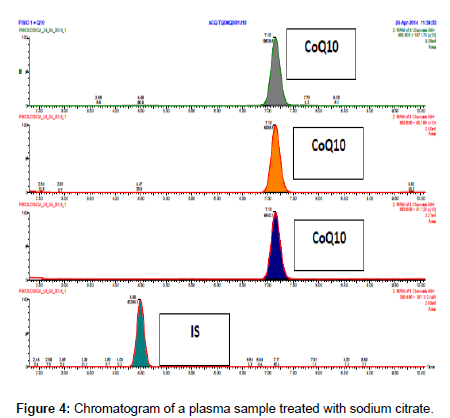 Figure 4: Chromatogram of a plasma sample treated with sodium citrate.

Reference standard samples and QC samples were prepared in physiological solution because being CoQ10 an endogenous substance, it is impossible to have blank matrices to be spiked. Specificity of the LC/MS-MS was evaluated by repeatedly extracting and analyzing 250 μL of plasma spiked with IS (100 μL, 1 μg/mL), checking the presence of interfering peaks for each MRM at the retention time of the investigated compounds.

LOQ was considered as the lowest concentration in which linearity was still satisfied, having a signal to noise ratio of at least 10. LOQ was 10 ngtot of CoQ10. LOD, defined as the lowest concentration of analyte that can be clearly detected, is estimated as three times the signal to noise ratio. The LOD was determined by progressively diluting the solution prepared for the determination of the LOQ and resulted to be 5 ngtot.

Accuracy and repeatability were assessed determining the Response Ratio (RR) as follows. Working standards samples (WSS) were prepared and analyzed to determine RAstd defined as:

Then for each solution the response ratio RR was calculated as:

Where Cstd is the concentration of the WSS (ng/mL)

Accuracy was evaluated as % recovery according to the following formula:

The calculation of the concentration of the analytes was obtained from the contemporary analysis of three QC (100 ngtot) always applying the following formula:

where RRmean is the mean of the response ratio obtained for the three QC.

Stability of CoQ10 in plasma samples

Stability of CoQ10 in plasma samples was deeply investigated. First of all six QC samples (100 ngtot were analyzed to evaluate repeatability and %CV was 6.93%.

Table 2: Concentration of CoQ10 in plasma sample stored at 4°C.

To evaluate long term stability five plasma samples were taken into account. After being analyzed, they were stored at 4°C and analyzed after 8 months. The t-test was performed (Table 3), showing that the two series of data are not statistically different (P<0.05), so we concluded that storing the samples at 4°C is a suitable way to preserve CoQ10 even for a long period of time.

In this way we demonstrated that it is not necessary to store plasma sample at -20 or -80°C as stated in the literature [1,4,8] for the analysis of CoQ10, thus simplifying the analytical procedure. In fact the analysis of frozen samples is more difficult and longer.

Nine healthy volunteers were monitored for 11 days. Their plasma was analyzed before the treatment (day 1, day 4) and the mean value of CoQ10 concentration was calculated. Then they were supplied with a food supplement containing CoQ10 for 7 days and at the end of the treatment their plasma (day 11) was analyzed. Results are reported in Table 4 and Figure 5.

Table 4: Plasma concentration (ng/mL) and increment of CoQ10 before (day 1, day 4) and after (11 days) the supplementation of nine healthy volunteers (F=Female; M=Male). 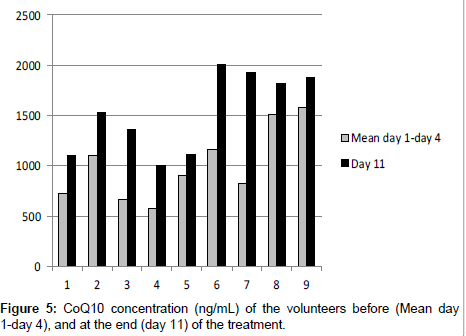 The series of data were statistically different (P<0.05) at the end of the supplementation of CoQ10. The increment of the plasma concentration of CoQ10 was calculated and in all volunteers there was a significant increment. This demonstrates that the assumption of a food supplement containing CoQ10 could be of help in increasing its plasma concentration in a significant way, affording all the beneficial properties of this ubiquinone.

The validated UPLC/MS-MS method for the determination of CoQ10 in human plasma was applied to the analysis of plasma samples belonging to nine people assuming food supplements containing CoQ10, in order to evaluate the increase of ubiquinone concentration in plasma after oral intake. The concentration of CoQ10 after the supplementation resulted significantly higher in all volunteers, indicating that assuming food supplements containing CoQ10 could be of help for increasing its concentration in plasma to exploit all the beneficial properties of this ubiquinone.