Copyright: © 2017 Dias IARB, et al. This is an open-access article distributed under the terms of the Creative Commons Attribution License, which permits unrestricted use, distribution, and reproduction in any medium, provided the original author and source are credited.

A screen-printed electrode based on a graphite and polyurethane composite (SPGPU) was used in the determination of epinephrine (EP) in cerebral synthetic fluid (CSF) sample. Both Differential Pulse Voltammetry (DPV) and Square Wave Voltammetry (SWV) were used to investigate the suitability of sensor for determination of EP. Under the optimum conditions, the analyte oxidation signal was observed at 0.17 and 0.080 V for DPV and SWV, respectively (vs. pseudo-Ag¦AgCl) in phosphate buffer (pH=7.4). A linear region between 0.10 and 1.0 µmol L-1 was observed in DPV, with detection limit of 6.2 × 10-7 mol L-1 (R=0.997). In SWV two linear ranges were observed, the first one between 0.10 and 0.80 µmol L-1 and the second from 1.0 to 8.0 µmol L-1 with limit of detection 9.5 × 10-8 and 6.0 × 10-7 mol L-1 (R=0.998) respectively. Recoveries of 99 to 100% were observed using the sensor for determination of epinephrine in the CSF. Interference tests showed that uric and ascorbic acids as well as dopamine increase the current of epinephrine, with acceptable levels for UA. The use of a standard addition of EP in the CSF solution containing the ascorbic acid allowed minimizing such interference.

Catecholamines control many processes in the body. The interest in the study of such compounds is due to fact that they are connected to the neurotransmitting process and associated with the Parkinson and Alzheimer diseases [1]. Thus, studies regarding determination of this analyte are of utmost importance.

Epinephrine (EP, Figure 1) is one of the members of this group present in sympathetic nervous system and synthesized by adrenal glandule, acting when the individual is subjected to strong emotions and whose main function is reducing the amount of blood in peripheral circulation, transferring the blood flow for other organs as heart, brain, liver and kidneys [2].

Despite their importance as neurotransmitter, the amount of catecholamines present in organism can induce a series of diseases, for example, in high concentrations can cause diabetes, trauma in central nervous system and arterial hypertension, in low concentrations can induce cognition and memorization problems and even schizophrenia [1].

Several analytical methods have been developed and employed in the determination of EP. Examples are those involving high performance liquid chromatography (HPLC) [3,4], extraction prior of fluorometric detection [5], solid-phase extraction for liquid chromatography [6], solid-phase extraction combined with LCMS/ MS [7], chemiluminescence [8], solid phase reactor based on molecularly imprinted polymer (MIP) [9] and others. Usually these techniques result in low analytical frequencies requiring complex sample preparation and generation of relatively large amounts of waste.

In a general sense, electroanalytical methods present many advantages in the determination of electroactive substances such as analyzing small volumes of samples, faster analysis time, among others. They are also used for the determination of EP with hundreds of proposed procedures and strategies of electrode modifications. Some representative examples of these determinations are summarized in Table 1.

Table 1: Comparison of some analytical characteristics of the proposed method with other examples of electrochemical procedures found in the literature.

On top of these advantages, screen-printed electrodes (SPE) present, suitability for automation procedures associated to higher reliability and repeatability [20,21] with a so low cost that they are disposable. Furthermore the preparation and modification of the ink with others materials such as metals, enzymes, polymers, nanomaterials and complexing agents increase the selectivity and sensibility of sensor in the determination of several analytes.

The ink used in this work is based on the same graphite-polyurethane composite previously used as conventional disk working electrode in the determination of many analytes, as recently reviewed [25] while here the material was used to construct the printed device as well as the electrical contacts of the SPE.

All solutions were prepared with water purified in a BarnsteadTM EasyPure© RoDi (Thermoscientific, model D13321) system with resistivity ≥ than 18 MΩ cm. The EP used was of analytical grade (Sigma-Aldrich, Germany). A stock 1.0 × 10-4 mol L-1 solution was prepared daily by dissolving the analyte in 0.1 mol L-1 phosphate buffer pH 7.4 and protect of light.

Voltammetric experiments were performed in an AUTO-LAB PGSTAT-30 (Ecochemie, The Netherlands) potentiostat/galvanostat coupled to a personal computer and controlled with a GPES 4.9 software.

Preparation of the screen-printed electrodes

The SPGPU was prepared as previously described Saciloto et al. [26]. The graphite-polyurethane composite (60%, graphite m/m) was used to prepare the components of the screen-printed electrodes as working and auxiliary electrodes as well as in the electrical contacts of the printed device. As already discussed [27], the composite does not respond in graphite contents lower than 50% (m/m) and it is not physically resistant in graphite contents higher than 70% (m/m). The best signals can be found using 60% (graphite, m/m). Briefly, the process consists in forcing the ink composed by composite GPU and solvent to pass through a mask to be deposited on a PVC plate (0.5 mm thickness). So, this set is partly covered by a layer of pure PU resin, used as insulation to define the area of electrical contact at one end. At the other end, there was another uncoated area to define the active area allowing the electrodes to be exposed. To one of the imprints it was attached a strip of silver epoxy (Conductive Silver Epoxy Kit, Electron Microscopy Sciences, USA) to serve as a pseudo-reference electrode (Figure 2). 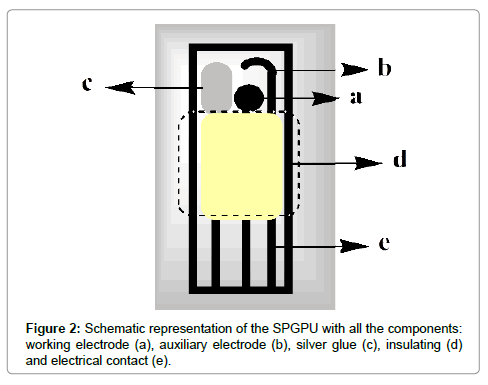 Figure 2: Schematic representation of the SPGPU with all the components:working electrode (a), auxiliary electrode (b), silver glue (c), insulating (d)and electrical contact (e).

Procedures for preparation of the cerebrospinal synthetic fluid

For determination of EP, a 250.0 mL solution of the cerebrospinal synthetic fluid (CSF) was prepared according to Oser [28] and Zhang et al. [29] as described in Table 2, containing the major constituents of the biologic fluid. This solution was spiked with EP and the pH adjusted for 7.4. The solution was immediately used after preparation to avoid the hydrolysis of the urea.

Optimization of the DPV and SWV parameters

Effect of the pH in redox process of EP

Interference studies were performed using substances with biological relevance as uric acid, ascorbic acid and dopamine at SPGPU in 0.1 mol L-1 phosphate buffer pH 7.4. In these studies, the peak current of 4.0 × 10-7 mol L-1 of epinephrine was compared with those obtained in the presence of 2.0, 4.0 and 8.0 10-7 mol L-1 of each potential interfering specie.

Electrochemical behavior of epinephrine at SPGPU

The morphology of the imprinted layer of the polymer can be observed in the SEM image in Figure 3. In which a homogeneous distribution of the particles of the composite can be noticed with average size in the 10 μm order as well as several porous inherent from the imprinting process and solvent evaporation. The diameter of the working electrode is presented in experimental section as 3 mm and the thickness of the composite layer is defined by the imprinting mask as 100 μm. 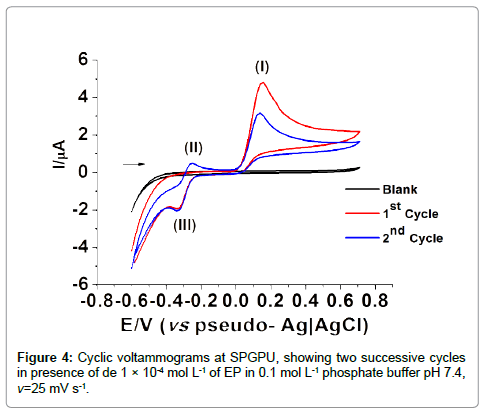 The mechanism of EP oxidation was proposed by Hawley and Kim et al. as represented in Scheme 1 [32,33].

According to the literature [34] the peak I represents the oxidation of EP, which involves two electrons and two protons producing epinephrinequinone (peak II). The oxidation-reduction involving the couple of peaks II/III corresponds to the electron transferring process that occurs via cyclization of leucoepinephrinechrome to epinephrinechrome. Because of signal intensity the peak I in 0.15 V (vs pseudo-Ag?AgCl) was chosen for further detailed studies of electrochemical determination of EP, being the potential window set at -0.25 to 0.20 V and -0.12 to 0.40 V (vs pseudo-Ag?AgCl) in DPV and SWV respectively.

The same process was observed in other studies for determination of the EP using sensor based on carbon nanotube film modified carbon electrodes [17] and electrochemical studies of oxidation of catecholamines [32].

Effect of the pH in redox process of EP

The effect of pH in redox process of the EP at SPGPU was investigated by studying the dependence of EP oxidation peak potential with the pH. The experiments were performed by cyclic voltammetric with the values of pH varying of 0.5 unit between 5.0 to 8.0 in the presence of 1.0 × 10-4 mol L-1 EP solutions. Figure 5 shows the dependence of the anodic peak current and the peak potential with of pH. 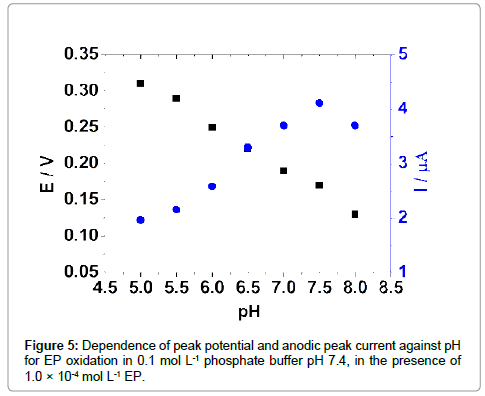 The curve of Ipa vs. pH revealed that the peak of anodic current have a maximum value in pH=7.5, decreasing in higher pH values. This is explained considering the oxidation-reduction mechanism of the EP, presented in Scheme 1. The oxidation process involves the liberation of 2H+/molecule that is injured in acid medium. On the other hand EP presents a pKa=8.88 [12], and in higher pH values the increasing concentration of the non-electroactive deprotonated form, causes a decrease in peak current. The physiologic pH of the cerebrospinal fluid for healthy individuals is approximated of 7.4, that corresponding to the region of maximum current in Figure 5, thus this pH 7.4 was chosen for the further experiments. 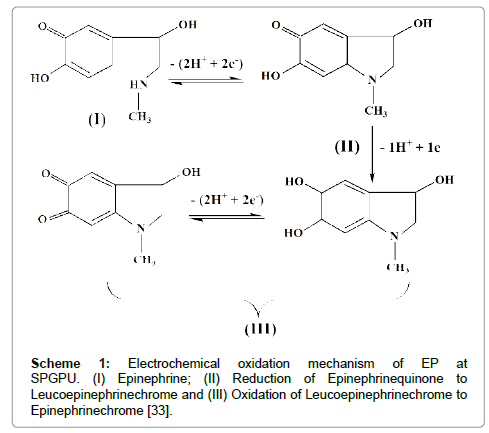 An analytical curve was thus obtained using 50 mV pulse amplitude and 10 mV s-1 scan rate for concentrations between 0.10 to 8.0 μmol L-1 as presented in Figure 6, with linear response between 0.10 to 1.0 μmol L-1, represented by Equation 1: 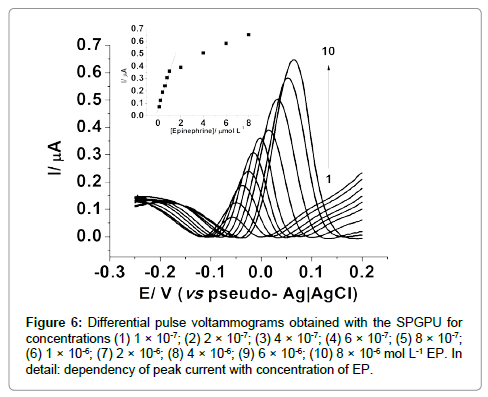 The correlation coefficient obtained was 0.997 and a detection limit of 6.23×10-7 mol L-1 calculated as three times the standard deviation of the background divided by the slope of the linear curve [35] and a limit of quantification 2.07 ×10-6 mol L-1 calculated as 10 times the background standard deviation divided by the slope of the straight line.

It is important to note that there is a displacement in the peak potential (Figure 5) while increasing the analyte concentration, so currents were taken at the higher values, in the respective peak potential. In addition for concentrations higher than 1.0 μmol L-1 saturation of electrode surface, resulting in non-linear responses were observed. 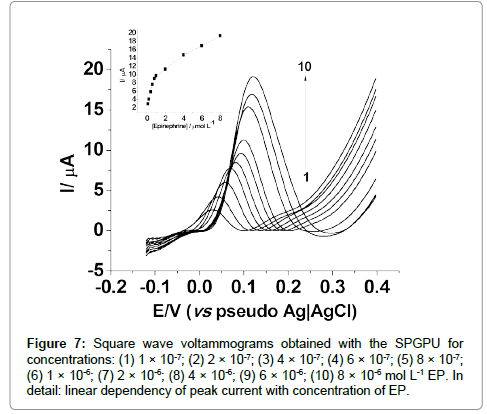 The presence of two linear regions in the analytical curves from both techniques suggests a competition by the active sites of the electrode above a certain concentration, probably provoked by the turnover on these active sites occupied by the electroactive molecules, once the kinetics of electron transfer is relatively slow, in an irreversible process.

To investigate the chemical interference in the EP analytical signal the effect of substances usually present in biologic fluids was evaluated using a fixed 4 × 10-7 mol L-1 EP solution in the presence of varying concentrations of uric (UA) and ascorbic (AA) acids and dopamine (DA), as detailed in Table 3.

Table 3: Effect of interfering in the presence of 0.40 mmol L-1 of Epinephrine.

Determination of epinephrine in sample of cerebrospinal synthetic fluid (CSF)

Table 4 presents the results of recoveries of EP in CSF using the SPGPU.

Table 4: Cytotoxic activity of the volatile oil and total extract of Salvia macrosiphon.

These results are comparable to that using edge plane pyrolytic graphite electrode modified with nanotubes for determination of EP in samples of blood and urine. This study showed recoveries of 97-104% [36]. The results obtained showed that the EIGPU can be used as sensor electroanalytical in the determination of EP in biologic samples with good results regarding recoveries.

These devices are supposed to be disposable due to its relatively low cost and have demonstrated to be stable for a relatively large period of time, at least 2 years, after production. After electrochemical pretreatment the devices are being used in our lab for more than 50 measurements, at least.

The composite SPGPU presented a satisfactory limit of detection and recoveries when compared to the literature and the possibility of determining EP in cerebral synthetic fluid using DPV and SWV in a simple, low cost and waste generation procedure in a disposable device even in the presence of AA and interference from UA and DA.

The authors are indebted to the Brazilian agencies CNPq and FAPESP.