Copyright: © 2015 Nimmanwudipong T, et al. This is an open-access article distributed under the terms of the Creative Commons Attribution License, which permits unrestricted use, distribution, and reproduction in any medium, provided the original author and source are credited.

Isotope analysis has been applied to facilitate identification of the origin, metabolic pathways, and biosphere-atmosphere interaction of organic materials [1-4]. Compound Specific Isotope Analysis (CSIA) is typically used to ascertain the isotopic composition of a target compound. However, in some cases, CSIA data alone are not sufficient for identification of the compound’s origin. Position-Specific Isotope Analysis (PSIA) has provided information related to the heterogeneous isotope distribution of organic compounds including amino acids, acetic acid, fatty acids, sugars, ethanol, and hydrocarbons [5-9]. This information is crucially important for the investigation of synthetic processes and metabolic pathways of the target compound. These isotope analysis techniques are also applied in the food industry for quality control [1,2].

Pyruvate, a key metabolite for carbohydrate metabolism, is necessary to trigger a plant’s citric acid cycle, fat, and protein metabolism. It can also be useful as a dietary supplement to increase the metabolic rate [10]. Pyruvate influences the isotopic contents of respired CO2 and its related metabolites. Therefore, its isotope signature would be beneficial for studying the authenticity and metabolic pathways in plants.

The main objective of this study is to improve the analytical method for intramolecular 13C distribution of pyruvate, which can be degraded into acetic acid and CO2 using H2O2 [11,12]. Results confirm the success of this technique: we obtained a pyruvate 13C intramolecular distribution pattern.

Additionally, we applied this method to ascertain the intramolecular 13C distribution in a pyruvate sample from pyruvate supplement pills. Dietary supplements are convenient choices that provide essential nutrients. Because of their high demand, the number of manufacturers has increased rapidly in the past few years. One way to remain competitive in the market is to decrease manufacturing costs to the greatest extent possible. Commonly, people prefer authentic products from natural sources. However, the same commercial synthetic substance, which is obtainable by the derivatization of petroleum or coal, offers a rapidly producible and cheaper alternative than the natural extract from biogenic sources [13-15]. According to the Food and Drug Administration (FDA) in some countries, synthetic substances are illegal: their manufacture is prohibited [16]. To minimize the risk of illegality, a method is needed to help differentiate between synthetic and natural substances [17-19]. This study considered the potential origin of pyruvate in dietary supplement based on the intramolecular 13C distribution.

For this study, pyruvate samples were measured after decarboxylation, which yields acetic acid and carbon dioxide. Bulk and intramolecular δ13C values of pyruvate are definable in a mass balance equation as

H2O2-catalyzed decarboxylation of pyruvate is described according to the following scheme:

In this study, sodium pyruvate samples (A, B, C, and D) were degraded using 30% hydrogen peroxide, then yielding acetic acid, CO2 and H2O as products, as described below. The yields of acetic acid at 10, 30, 60 and 120 min of degradation time were determined using ion chromatography (IC-20 Dionex™; Thermo Fisher Scientific Inc., Bremen, Germany).

For the degradation of sodium pyruvate, a pyruvate aqueous solution was prepared at 85 mM diluting with distilled water. For pyruvate supplement samples, pyruvate was separated from other ingredients before dilution with distilled water. One pill of 750 mg (DP2, DP3) and 1000 mg (DP1, DP4) was used for pyruvate extraction. Regarding to packages’ label, pyruvate supplementary samples have main ingredients consists of pyruvate salt, gelatin (contained capsule), stearate, and cellulose. The gelatin container was taken off and discarded (DP1, DP2, DP3); the powder sample was kept. The DP4 tablet was crushed to powder in ceramic mortar. Remaining powder of samples was diluted in 100 mL milliQ water. Because of the lack of water solubility, stearate and cellulose were separated using microfiltration three times using a 20 μm filter. Then the pyruvate aqueous solution was obtained from supplement samples.

In a 20 mL gas-tight vial, 1 mL of each pyruvate aqueous solution sample was put in and topped with rubber cap for analysis. To samples for pyruvate degradation, 0.2 mL of H2O2 was added. After complete degradation, the samples’ pH was adjusted to 1.0-2.0 pH by adding 0.2 mL of 0.1 mol/L HCl. The CO2 derived from the degradation was collected and purified by repeated cryogenic method and trapped in the Pyrex® sealed tube for δ13C analysis.

Acetic acid from pyruvate degradation was extracted using an SPME device, equipped with 85 μm SPME fiber coated with carboxen/ polydimethylsiloxane (Carboxen/PDMS stableflex™; Supelco, PA, USA). Extraction was conducted in a thermostatic chamber controlled to 25°C: the non-stirred samples condition. The extraction time was 60 min. After HS-SPME extraction, the fiber was inserted into the injection port of the first gas chromatograph at 250°C. Helium was used as a carrier gas for all experiments. Chromatographic conditions were the following: 2.0 mL/min flow rate of carrier gas and 10:1 split ratio. The first oven temperature program was the following: 100°C (5 min), then rising to 190°C (10 min) at the rate of 15°C/min, and finally at 200°C (2 min) at the rate of 15°C/min. The second gas chromatograph was kept constantly at 40°C.

Completeness of reaction and consistency of method

The experiment of pyruvate decarboxylation by H2O2 was conducted respectively in ranges of 10, 30, 60 and 120 min. The acetic acid yield was measured using ion chromatography and was calculated using a calibration curve of the acetic acid standard. As shown in Table 1, the yield of acetic acid reaches 99% at 60 min reaction time. At the 120 min range, it also had the same number around 99%, which implies that the reaction is completed at 60 min. For subsequent experiments, we used 60 min as the decarboxylation time.

The consistency of δ13CC-1 (δ13C value of C-1 of pyruvate) was confirmed by comparison of δ13CCO2 between the value calculated using the mass balance equation of pyruvate (equation 2) and from direct measurement, which are expected to be the same. Table 2 shows that the differences of δ13CCO2 values from the two methods were approximately 0.6‰, which is an acceptable range, showing that usage of the mass balance equation can obtain δ13CCO2 value (equation 2). This consistency of method has also confirmed the acceptable use of HSSPME- GC-Py-GC-C-IRMS, for which δ13C of C-2 and C-3 (δ13C value of C-2 and C-3 of pyruvate) are obtainable in a single step. Without the measurement of bulk δ13CAcOH value, the δ13C measurement can reduce the unexpected errors occurs by duplicate sample preparation or switching between configuration systems [20]. δ13CC-1 value can be calculated later using the mass balance equation of pyruvate.

aStandard deviation from the mean (n=3)

Table 3: Δ13C measurement of sodium pyruvate samples and degraded fragments with Δ13C calculated from the mass balance equation and measurement values of Δ13C. 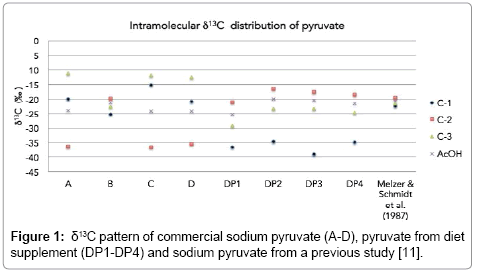 Another pattern of intramolecular δ13C values might have a different mode of production or substrate. Pyruvate can also be produced using biotechnological methods. Biotechnological methods have at least three methods: direct fermentation method, the resting cell method, and the enzymatic method [25]. The enzymatic method is simple, with a high conversion rate of the substrate. For example, lactate can be the substrate for pyruvate production using L-lactate catalyzed by glycolate oxidase in Hansenula polymorpha [26]. However, the high price of raw materials and some complicated processes for removal of by-products of production are shortcomings related to industrialize enzymatic methods for pyruvate production. Consequently, direct fermentation and the resting cell methods have higher potential for mass production of pyruvate. Samples A, C, and D have found enrichment in δ13C value in C-1 than C-2 and C-3, which also have the same trend of δ13C values as those of biological products reported from previous studies [8,23]. In this case, samples A, C, and D should have been regarded as products from biotechnological methods. We also considered the pattern of δ13C values of the sodium pyruvate sample that used H2O2 degradation in a previous study [11], which has a similar pattern to that of sample B and which should fall into the category of chemical synthesis production, from the 13C depletion in its carboxyl carbon than its C-2 and C-3.

Adoption of HS-SPME-GC-Py-GC-C-IRMS produces a more convenient analytical method for the determination of intramolecular δ13C values in pyruvate. Pyruvate samples in this study have two patterns that are useful for categorizing samples into different production processes. Further studies of the natural pattern of the pyruvate from plants can be a good first step, followed by studies of pyruvate production by different known processes. These will help to distinguish the pyruvate samples into the correct categories of origin processes.

This study was supported by a Grant in-Aid for Scientific Research (S) (23224013). A. Gilbert appreciates a Grant-in-Aid for Young Scientists (B) (15K17774), and thanks MEXT, Japan, for financial support.