Copyright: © 2016 Babu MD, et al. This is an open-access article distributed under the terms of the Creative Commons Attribution License, which permits unrestricted use, distribution, and reproduction in any medium, provided the original author and source are credited.

Selected-ion monitoring (SIM) mode mass selective detection was developed and validated for the trace analysis of an impurity, methane sulfonyl chloride as an impurity in Itraconazole (ICR) active pharmaceutical ingredient (API). The analytical method validation is essential for analytical method development and tested extensively for specificity, linearity, accuracy, precision, range, detection limit, quantization limit, and robustness. Accurate and precise quantitation of the impurity in drug substance was achieved with external standardization. In this research work, we present a summary of the method development and validation work performed on Methane sulfonyl chloride (MSC) in Itraconazole API by GC/MS-SIM technique. In the method development phase, the analytical procedure that is appropriate for the quantitative analysis of the MSC in ICR at ppm level was established and evaluated.

Numerous analytical methods for the determination of pharmaceuticals and their metabolites in aqueous solutions have been described in the literature. Liquid chromatography-mass spectrometry (LC-MS) and Gas chromatography-Mass spectrometry (GC-MS) are the most widely used techniques [1]. A mass spectrometer is typically utilized in one of two ways: full scan or selected ion monitoring (SIM). The typical GC-MS instrument is capable of performing both functions either individually or concomitantly, depending on the setup of the particular instrument. The primary goal of instrument analysis is to quantify an amount of substance. This is done by comparing the relative concentrations among the atomic masses in the generated spectrum in selected ion monitoring (SIM) certain ion fragments are entered into the instrument method and only those mass fragments are detected by the mass spectrometer. The advantages of SIM are that the detection limit is lower since the instrument is only looking at a small number of fragments (e.g., three fragments) during each scan [2]. SIM mode the mass spectrometer is ‘targeting a limited mass range’; the number of scans across the peak has increased resulting in better peak shape. This is an easy solution for getting better quantitation for early eluting peaks. Inspect the ions obtained for the peak in full scan mode and use at least one of the ions in SIM to obtain a better scan rate [3].

Methane sulfonyl chloride (MSC) is an organosulfur compound with the formula CH3SO2Cl. It is a colorless liquid that dissolves in polar organic solvents but is reactive towards water, alcohols, and many amines. During the manufacturing process of Itraconazole, formation of Methane Sulfonyl Chloride is possible due to residual methanol available in the manufacturing process and may also be formed due to thermal interaction in presence of methanol.

Methane sulfonyl chloride is a potential genotoxic impurity in Itraconazole (ICR) drug substance as it was the part of synthesis process. As per the International conference on harmonization Guidelines from European medical Agency the genotoxins were to be limited to 1.5 μg/ day [4,5]. MSC is having -Chloro as a functional group with aliphatic chain, as per the guideline it is a genotoxic alerting compound. Sensitive method for the analysis of ICR as genotoxic impurity was not available. While developing method at such a low-level, interferences due to drug substance as well as other process impurities and degradation products were the major problems in achieving specificity. Hence based on published general strategies for genotoxic impurities and on the threshold of toxicological concern (TTC), MSC was evaluated in ICR drug substance.

Itraconazole (Figure 1) is a classical member of the triazole class and is an important drug in our arsenal to treat fungal infections because it exhibits broad-spectrum anti-fungal activity [6-10]. Itraconazole (+-)-ics-4[4-[4-[4-[[2-(2,4-dichlorophenyl)-2-(1H- 1,2,4-triazol-1-ylmethyl)-1,3-dioxolan-4-yl] methoxy] phenyl]-1- piperazinyl] phenyl]-2,4-dihydro-2(1-methylpropyl)-3H-1,2,4-triazol- 3-one, is an orally active triazole antifungal agent which demonstrates broad spectrum activity against a number of fungal species including dermatophytes. It has been demonstrated that GC-MS method offers several advantages over high performance liquid chromatography (HPLC) method including better Sensitivity, specificity, and higher throughput. This paper presents a highly specific and sensitive GC-MS method for the Methane Sulfonyl Chloride in Itraconazole API as per ICH guidelines [11]. This approach eliminated the time-consuming liquid-liquid extraction used in HPLV-UV method, increased the detection limit, and greatly reduced sample processing and instrument acquisition time. Thus the paper reports an economical, simple and accurate GC-MS method for MSC in ICR.

Diluent: Dichloromethane is an organic compound with the formula CH2Cl2. This colorless, volatile liquid with a moderately sweet aroma is widely used as a solvent. Although it is not miscible with water, it is miscible with many organic solvents. Dichloromethane was selected as the standard and sample diluent because of its ability to dissolve a wide variety of substance.

Preparation of sample solution: Weighed accurately 10.0 g of the Itraconazole API into 20 mL of volumetric flask, add 10 mL of Diluents mix well then make up with the same diluents.(Final concentration is 500 mg/mL of API).

GC-MS analysis was carried out on GCMS-QP 2010 plus system (Shimadzu) having GC-MS Solutions software, an analytical balance (XS 205 from Mettler Toledo) and autopippette (100 μL–1000 μL from Eppendorf) were used. The GC-MS Experimental conditions for Methane Sulfonyl Chloride content in Itraconazole as shown in Table 1. 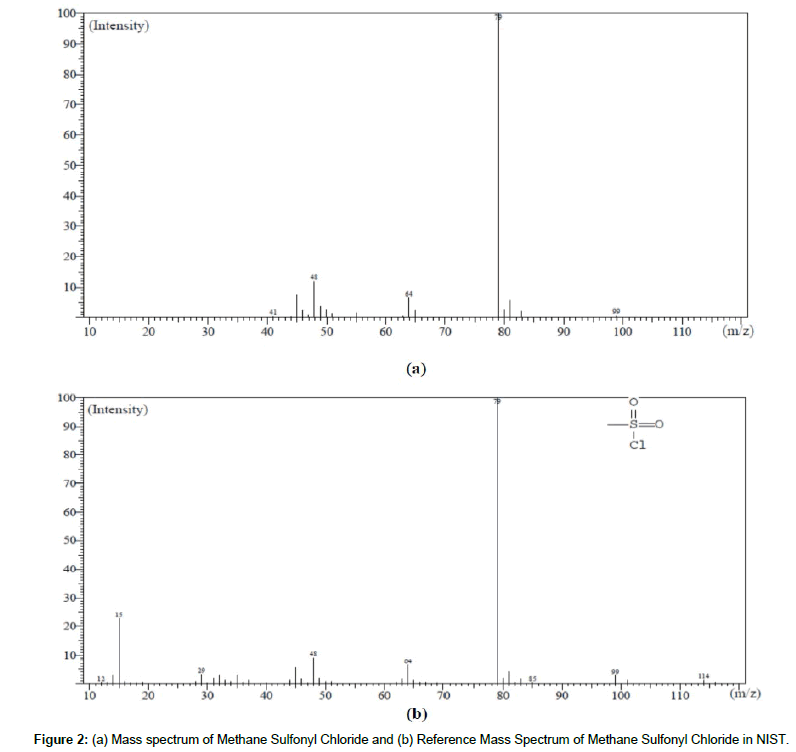 The Itraconazole API sample was spiked with Methane Sulfonyl Chloride and sample was chromatographed to examine interference, if any, of the residual solvent peaks with each other. The retention time for standard Methane Sulfonyl Chloride 5.45 min, respectively. The Chromatograms of Blank, Standard MSC and Itraconazole API were as shown in Figure 3. 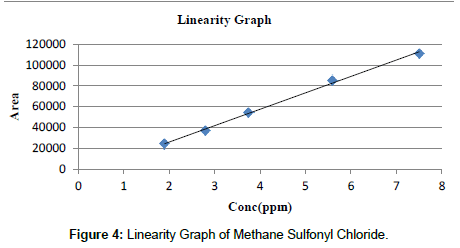 Weighed accurately 10.0 g of the Itraconazole API into three different 20 mL of volumetric flasks and spiked with 1.9 ppm, 3.75 ppm and 5.6 ppm standard solutions of Methane Sulfonyl Chloride, add 10 mL of diluents mix well then make up with the same diluents. Inject three levels in triplicate. From accuracy data, the % recovery of Methane Sulfonyl Chloride was found within the limits (100 ± 15%). Results indicates that the method has an acceptable level of accuracy. The results are presented in below Table 5. 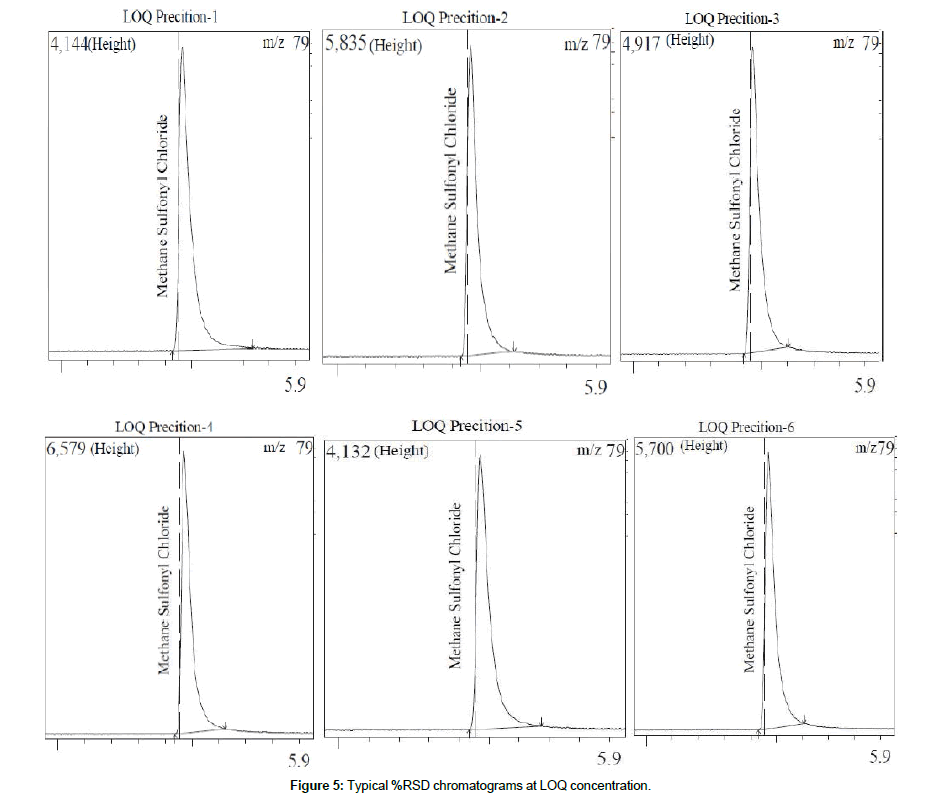 Weighed accurately 10.0 g of the Itraconazole API into three different 20 mL of volumetric flasks and spiked with LOQ level (1.32 ppm) standard solution of Methane Sulfonyl Chloride, add 10 mL of diluents mix well then make up with the same diluents and inject in triplicate. From accuracy data at LOQ level, the % recovery of Methane Sulfonyl Chloride was found within the limits (100 ± 15%). The data of LOQ-Accuracy was as shown Table 8.

Ruggedness of the method was evaluated by performing the sample analysis in six replicates using different analyst on different days. The %RSD values of less than 15.0% for Methane sulfonyl chloride content indicate that the method adopted is rugged. The data of Ruggedness was shown in Table 9.

This study was performed by making small but deliberate variations in the method parameters. The effect of variations in flow rate of carrier gas and Column Oven temperature was studied. Under all the variations, system suitability requirement is found to be within the acceptance criteria and hence the proposed method is robust. The relative standard deviation of area counts for Methane Sulfonyl Chloride peak obtained from six replicate injections of standard solution should be not more than 15.0%. The data of Robustness was as shown in Table 10 and Table 11.

A simple high throughput GC-MS method has been developed and fully validated for determination of Methane sulfonyl chloride in Itraconazole API. This method is specific, sensitive, and reproducible and has been successfully to monitor and control impurity level. The residue Methane Sulfonyl Chloride was determined in ppm levels also. The method well suits for the intended purpose.

SVRM College and Management are acknowledged for financial support of this research project.